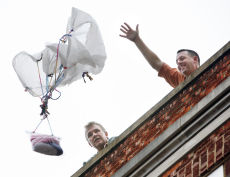 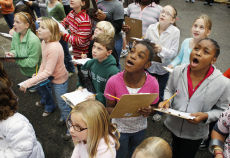 Fifth-grade students at Crystal Spring Elementary School in Roanoke watch as eggs encased in cushioning devices are tossed off the roof of the school.

Warner McGhee worked on his project for the better part of last month.

Then his fifth-grade science and social studies teacher, Wade Whitehead, threw it off the top of the school onto a big, black slab of pavement.

Watching his hard work fall to the ground wasn't some kind of new-age punishment -- it was the aim of the game.

Warner and his 48 fellow fifth-graders had been working for three weeks on the annually anticipated Crystal Spring Egg Drop Project, which began 12 years ago under the direction of then fourth-grade teacher Dave Merritt.

Students are required to use four items -- one plastic food storage bag (like a Ziploc), a tissue, up to 24 inches of string and some kind of tape.

"Beyond that, they can pick two other materials to integrate into the project if they want to," said Whitehead.

Whitehead's students used everything from coat hangers to marshmallows.

"I knew that I needed something to protect the egg and a parachute," said Emily, whose egg also remained intact.

Each fifth-grader had a clipboard to record the fate of each egg and the time it took to fall -- the longer the better.

Emily's egg hit the ground after 6.87 seconds, a great time, but she thinks it could have been better.

"I think if it was lighter, it would take longer and have a lighter touch," she explained.

Ben Vance's design was lighter than air -- in fact, it was filled with helium. The 24-inch balloon he used helped slow his egg to a 6.78 second fall but, unfortunately, his egg was scrambled.

Lucky for Ben and the nine other students whose eggs broke, grades will not be based on whether or not the egg survived intact. Whitehead said the preparation is what counts -- and Ben has been planning for years.

"My brother and sister came here and they did this and I wanted to beat their times," Ben said. "My egg didn't break on my practice trials; I'm surprised it broke here."

Merritt, now the principal at Crystal Spring, designed the project to incorporate science, math, social studies and even English, so there is definitely learning involved. But the project is so popular that Whitehead, who is the current coordinator of the project, said his students began asking about it on the first day of school.

"It's a very academic project, but nobody realizes that," said Whitehead who, with Merritt, spent the better part of Friday morning on the roof of the school. "It's a good mix."

Fifth-grade students at Crystal Spring Elementary School in Roanoke watch as eggs encased in cushioning devices are tossed off the roof of the school.