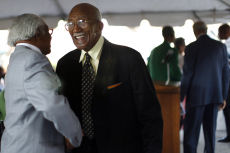 Richard Dean (center) is greeted Saturday by the Rev. Clinton Scott (left) before a celebration honoring men in their 90s who worked for the railroad in the days of segregation. 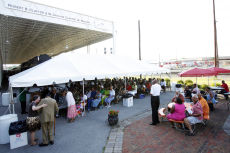 People gather at the Virginia Museum of Transportation in Roanoke on Saturday to remember the contributions of the black workers who helped establish the railroad heritage of Roanoke and the Norfolk and Western Railway.

Were it not for the railroad, there would be no Roanoke.

That's the conventional wisdom often expressed by city residents who point to the Norfolk & Western Railway's decision to move to the small town of Big Lick in the 1880s as the spark that ignited the city's history.

But there's a corollary to that statement as well: Were it not for the black men who toiled on the tracks, in the freight center and in dining cars, the railroad would not have been what it was and is.

Just a handful of black men survive of all those who worked for the railroad during the 1930s and '40s -- a time when segregation was still legal and there was no such thing as equal opportunity laws. There are fewer with each passing year: Frank Dean, who worked in the rail shops, died just last month at age 97.

On Saturday, the African-American N&W Heritage Group and the Virginia Division of the Norfolk Southern Corp. celebrated the contributions of the remaining men over 90 years of age who toiled for the railroad: Richard Dean, Frank Dean's brother; Lee Graves; Joseph Johnson; Al Holland; Ulysses Randolph; and John Divers.

A. Byron Smith, who did not work with the railyard but who has helped the heritage group, was also honored.

The event, held at the Virginia Museum of Transportation, also marked a chance for other railroad employees and transportation aficionados to express their appreciation for the men and their contributions to Roanoke.

"Those of us who are still working for Norfolk Southern would like to thank all of the recipients because we're standing on their shoulders," said John Nutter, a locomotive engineer. "They allowed us to be able to do what we do."

The heritage group already has transformed many of the men's stories into a transportation museum exhibit called "African-American Heritage on the Norfolk & Western, 1930-1970." It is also collecting stories for a book called "From Cotton to Silk," which will track African-Americans' progress from lower-level jobs to higher-paying positions. The book is still in planning stages.

The men, now in their 90s, worked for the railroad during a time when employment there meant prestige in the community. Railroad jobs paid more than most others at the time, and those men who held them were looked up to by others. They earned enough to buy cars, to buy houses and to send their children to college.

"It was a promotion from the other jobs I'd had. The railroad is just different," said Divers, 92. "At that particular time, it was different for the black men because it gave him a quality, decent salary. ... It made us feel like men."

Richard Dean, 95, said he was paid 42 cents an hour for working all day with no overtime, but that meant he could buy a nice set of clothes "for $40 and still have some change in your pocket left over for the weekend."

But there were limitations. In the era of segregation, black men were limited largely to menial labor. And taking a job meant that one was all but stuck there with no chance for advancement.

"There weren't any promotions then," said Holland, 93. "You were unpromotable men."

That began to change with passage of the Civil Rights Act of 1964, which included provisions to prohibit discrimination by employers on the basis of race, color, religion, sex or national origin.

Holland had worked for years as a janitor for Norfolk and Western. The job helped him buy a home for his family -- but for years gave him no chance to advance.

"When fair employment came, I said, 'I'm going to apply for some of these other jobs,' " Holland said. "I got in the office up there, in the mail room. Every time a job opened up, I'd be there up on it. When I left there [in 1985] I was assistant manager in tariff compilations."

Later generations have benefited even more. David Cobbs, a Roanoke native who was the event's guest speaker, started out with NS as a laborer in the Shenandoah Division and now serves as one of the company's assistant vice presidents.

NS was also included this year in Black Enterprise magazine's annual list of the "40 Best Companies for Diversity."

Divers, Holland, Dean and others are humble men, but they are proud of their role in the railroad and its role in Roanoke.

"Put it this way: The railroad was Roanoke. That was it," Divers said. "If something came up, you'd find railroad officials right in the middle of it trying to get it straightened out. It was just a railroad time."

Richard Dean (center) is greeted Saturday by the Rev. Clinton Scott (left) before a celebration honoring men in their 90s who worked for the railroad in the days of segregation.

People gather at the Virginia Museum of Transportation in Roanoke on Saturday to remember the contributions of the black workers who helped establish the railroad heritage of Roanoke and the Norfolk and Western Railway.