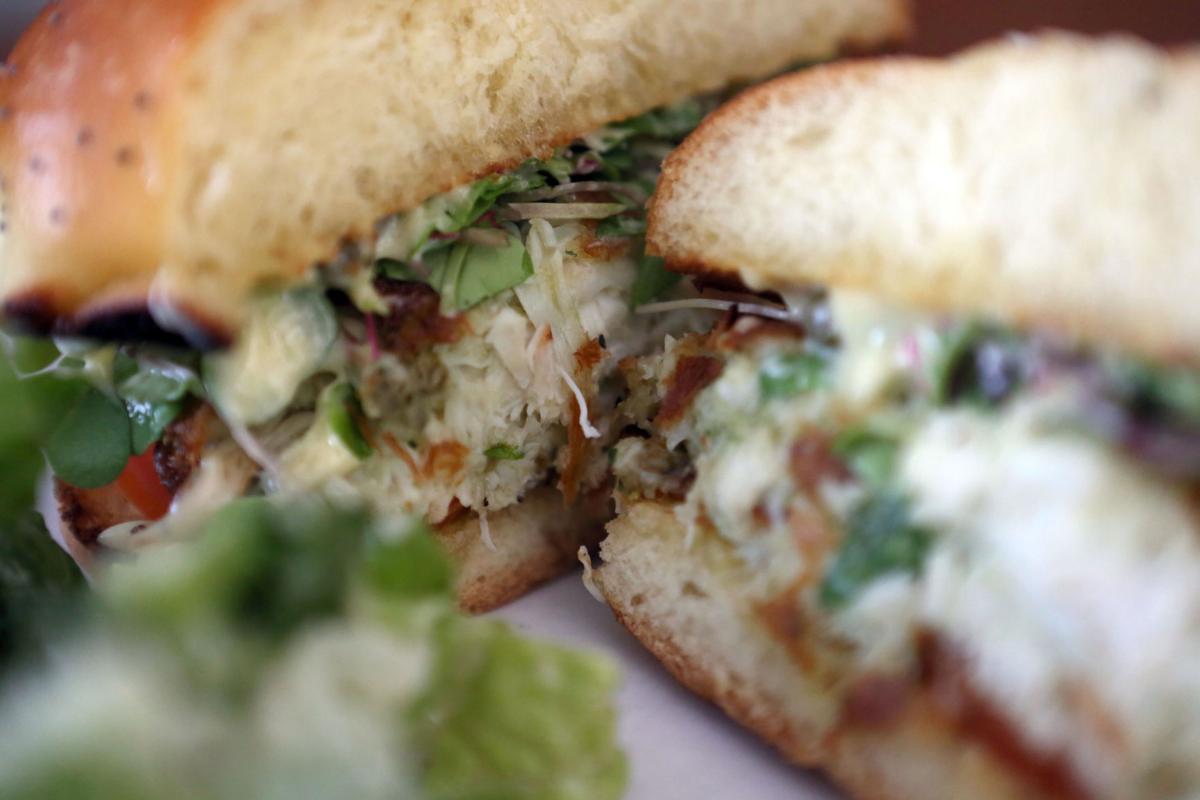 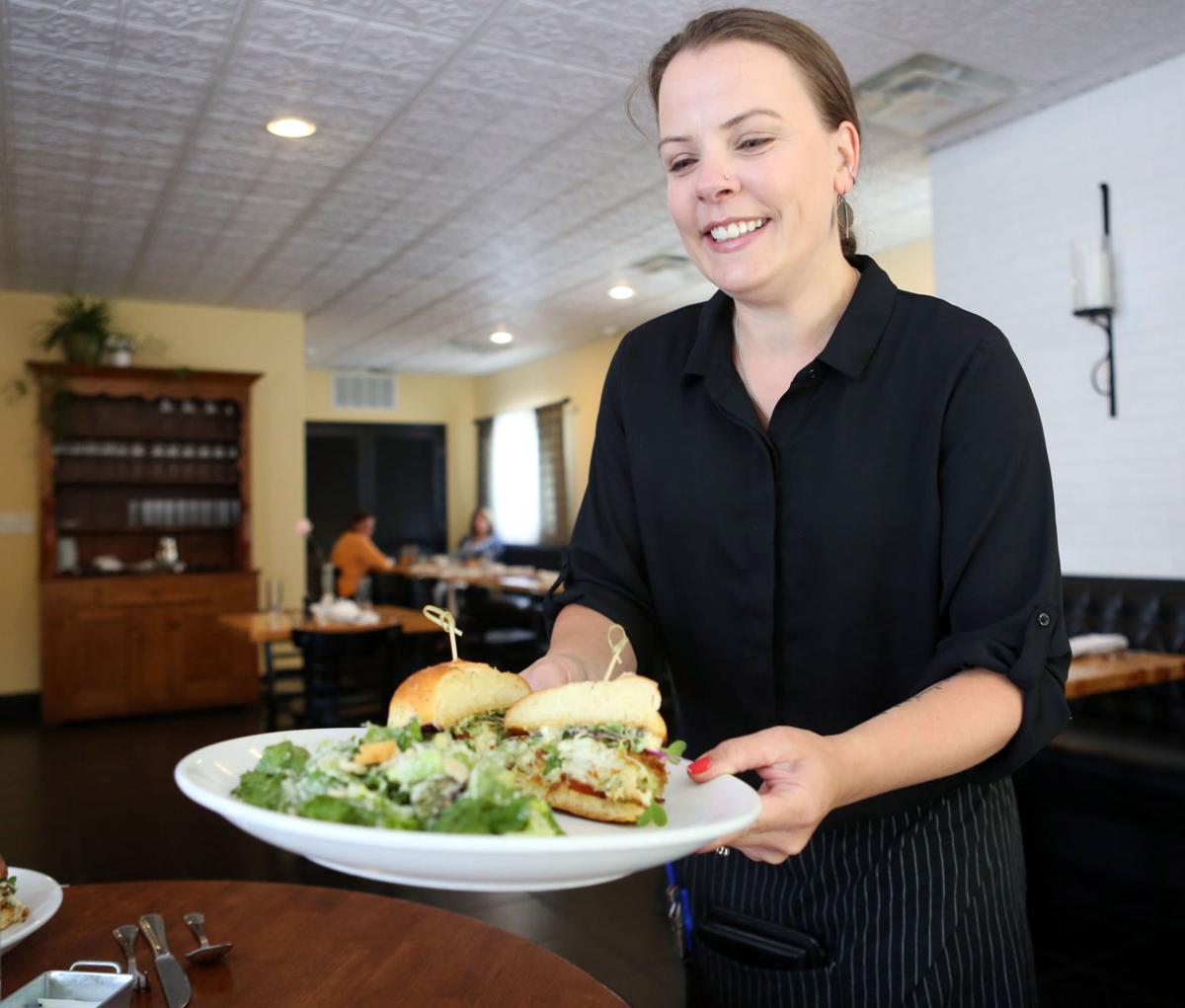 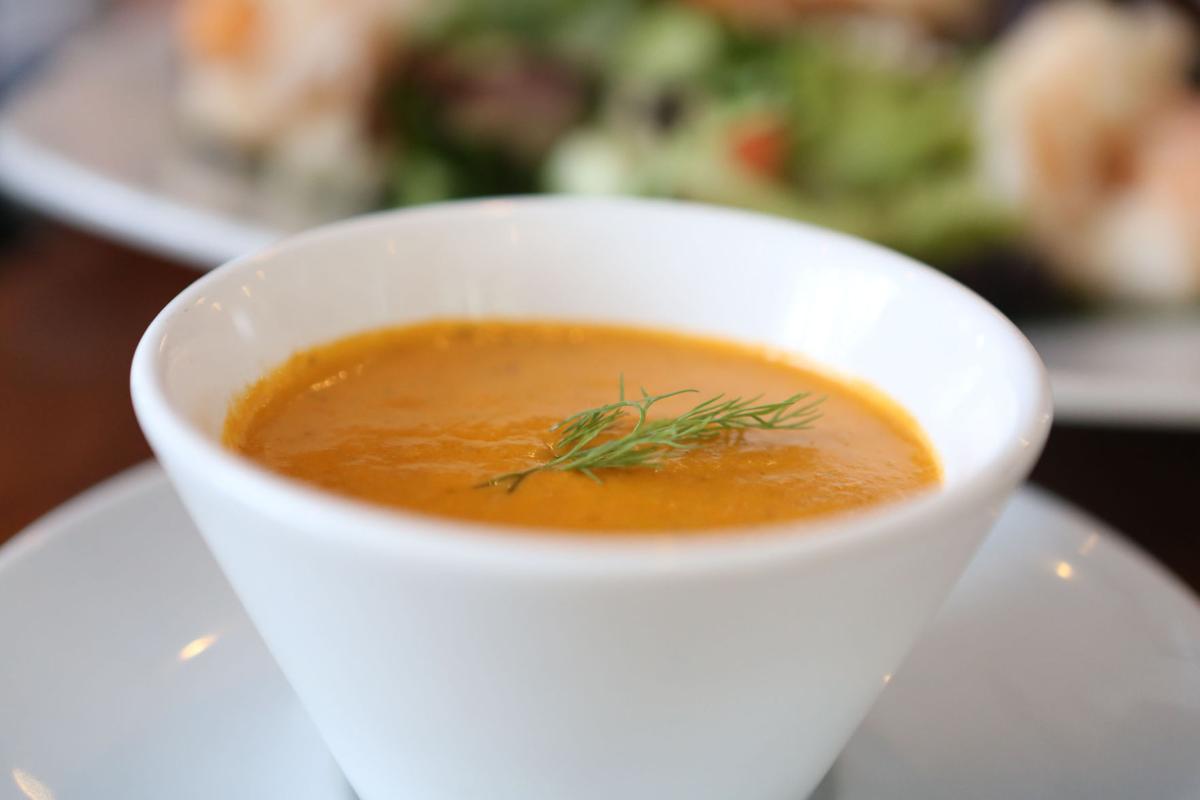 Tomato dill soup was one of the soup-of-the-day selections recently. 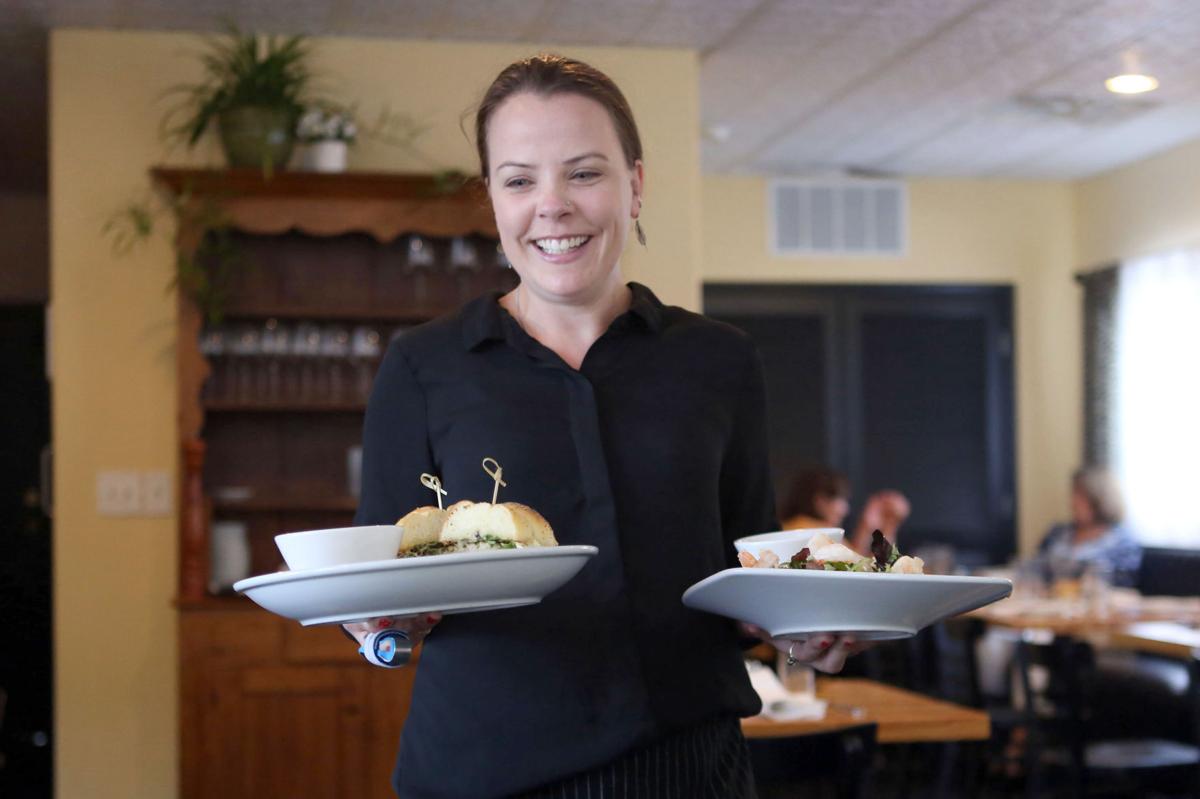 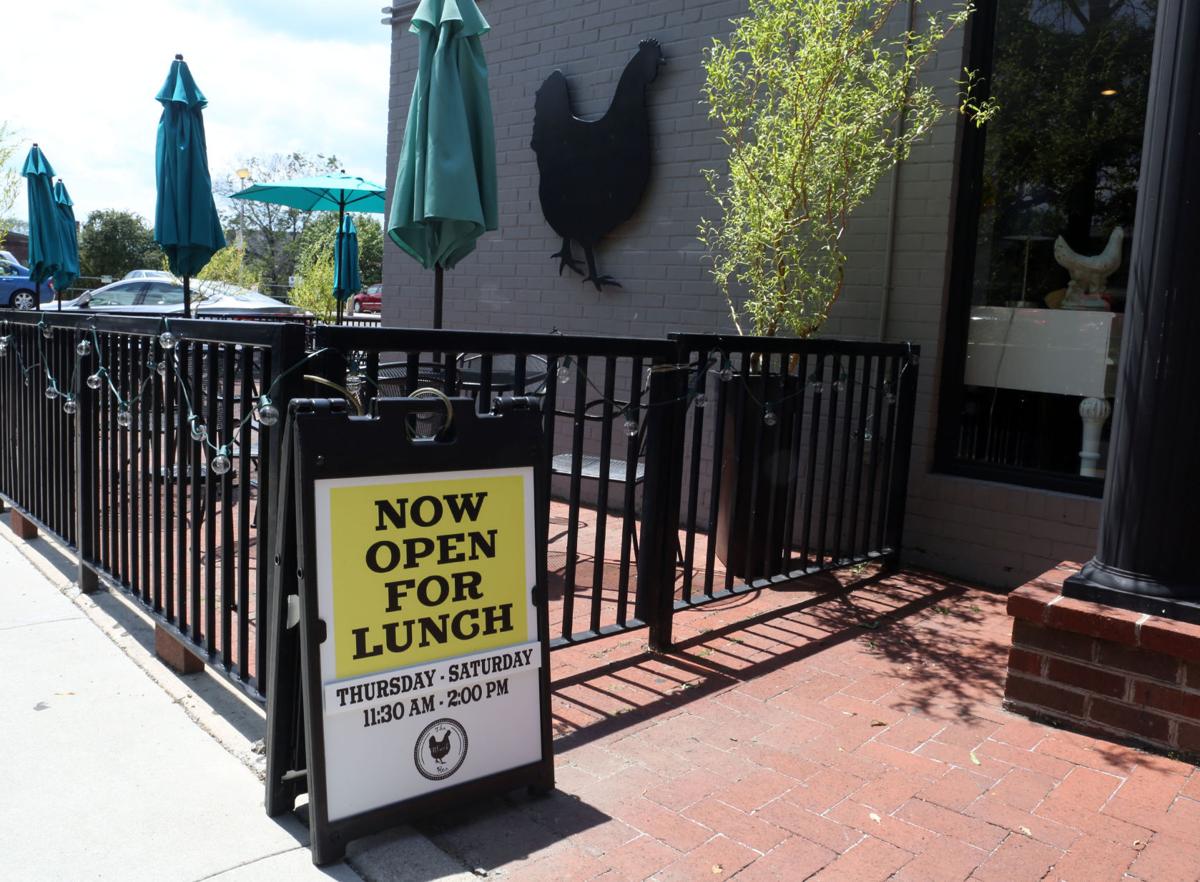 The Black Hen Restaurant in downtown Blacksburg is now open for lunch Thursday through Saturday. 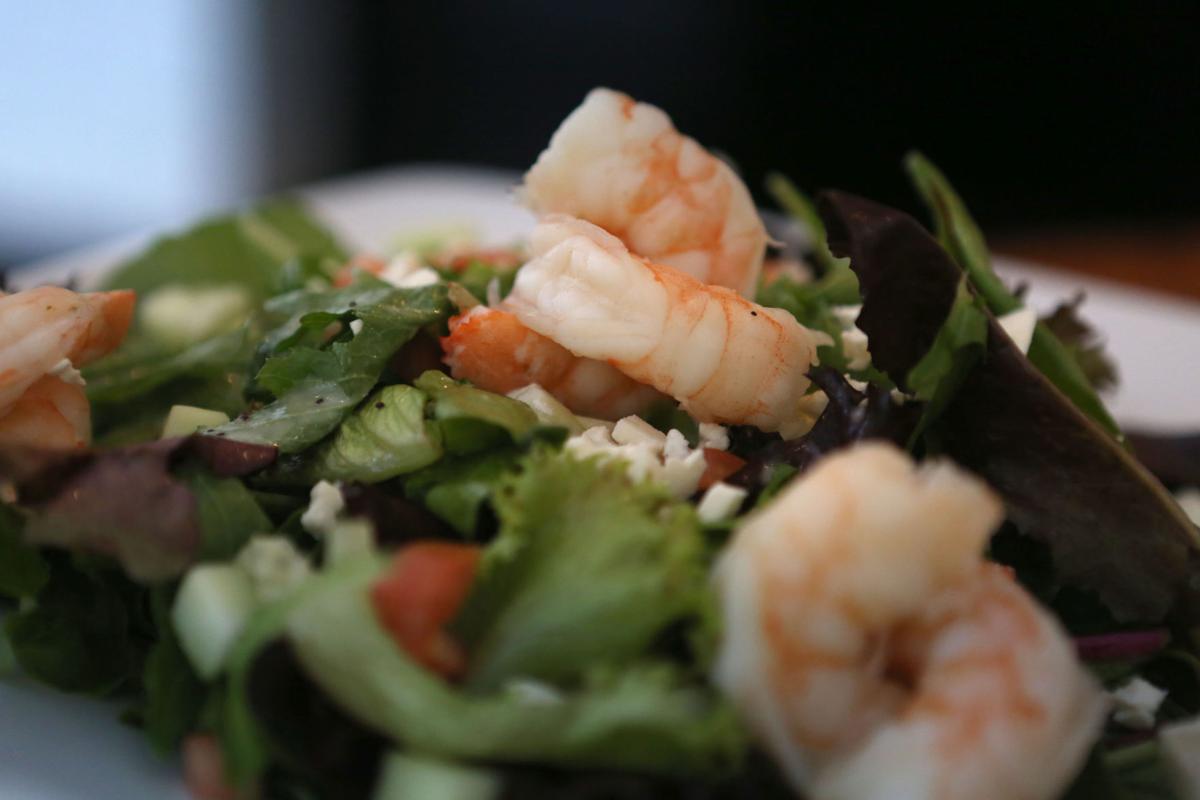 A green salad topped with shrimp is one of the items on the lunch menu. 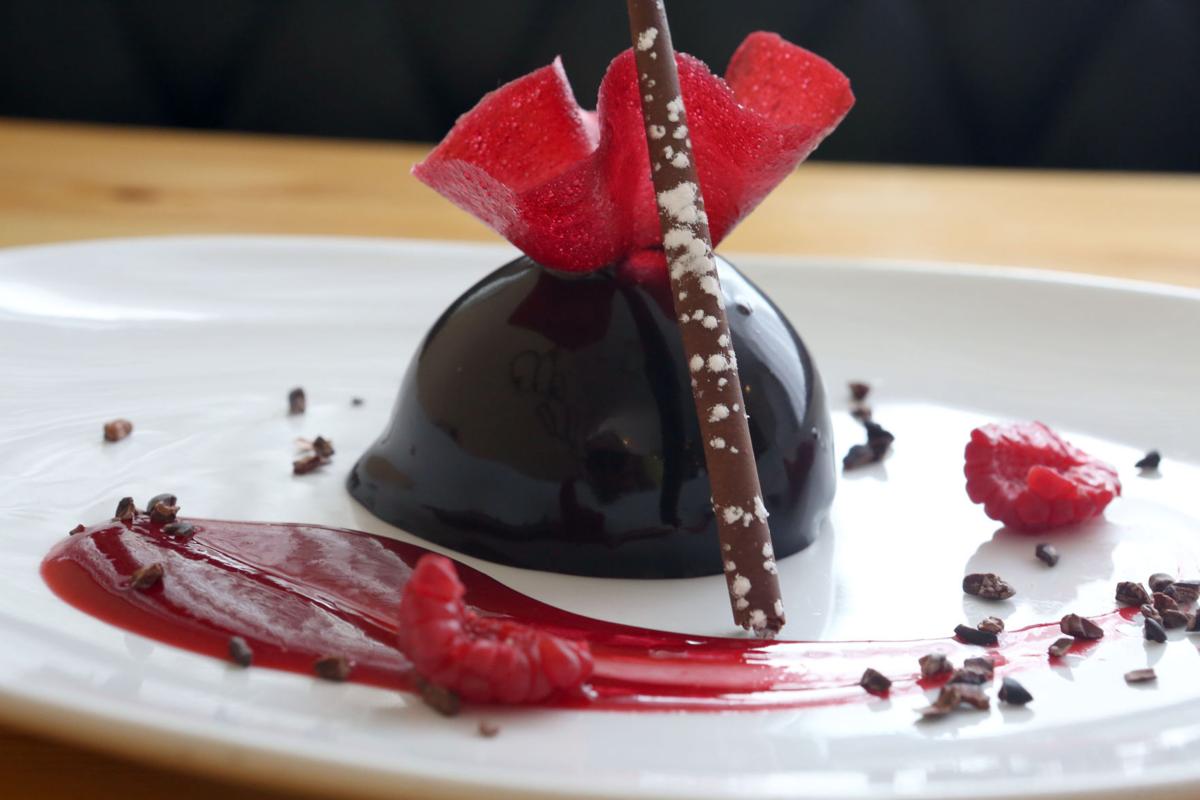 Tomato dill soup was one of the soup-of-the-day selections recently.

The Black Hen Restaurant in downtown Blacksburg is now open for lunch Thursday through Saturday.

A green salad topped with shrimp is one of the items on the lunch menu.

The Black Hen Restaurant, located on Jackson Street in downtown Blacksburg, is a favorite of mine for an upscale dinner. The service is as impeccable as the food, which is locally sourced where possible and featured in an ever-changing selection of unique dishes. Dinner there is not, however, inexpensive. So when The Black Hen started serving lunch, I was excited about the possibility of getting the same quality dishes and service on a more economical scale.

I met a friend at The Black Hen on a recent weekday to sample the lunch fare. On this particular day, we were the only souls in the restaurant, where lunch hours had just begun. After a few moments lingering in the entrance, we were greeted by a longtime server, whom I recognized from past visits. We were given our choice of seating, selecting a table on the patio with a view of Jackson Street. Though the street is close, it’s one way, and traffic is mainly limited to pedestrians, making for good people watching.

I started my meal with a bowl of the soup of the day ($9), a cream of broccoli, which was rich and smooth, and clearly made with fresh produce. I had to stop about halfway through the bowl, however, as it was also quite filling and I wanted to save room for the main plate — a tuna BLT ($15) with charred rare tuna, bacon, sprouts, tomato and wasabi mayo, with which I chose a side of house fries. The tuna was perfectly cooked, with a nice char outside and a red, silky interior. The bacon provided a contrasting salty crunch to the tuna’s texture without overwhelming the flavor. I would have enjoyed a touch more wasabi mayo, but that’s a minor complaint. The house fries were delicious wedges, cooked perfectly, with a crisp flaky exterior, a warm pillowy interior and just the right amount of salt.

My friend selected one of the lunch menu’s large plates: seared mustard panko crusted salmon ($17) with roasted potatoes and seasonal vegetable, which in this case was broccolini. Like the tuna, the salmon was fresh and flavorful, with a toasty panko crust (an Asian-style flaky breadcrumb) and a lovely piquant mustard sauce. My companion felt the fish was slightly overcooked, but prefers his fish to be on the rarer side; I didn’t find it problematic. However, we did both find an issue with the potatoes. Though they looked nicely roasted on the outside, most were quite undercooked, to the point of crunchiness. The broccolini was, by contrast, cooked al dente, fresh and bright green, though it could have used a bit more seasoning. (As a side note, on a separate dinner occasion, both the roasted potatoes and the broccolini were perfectly cooked and seasoned.)

I returned with the same friend on a Saturday afternoon, this time finding he restaurant occupied by a few other diners. We selected an indoor table for this meal, enjoying the modern-rustic interior. Despite the fact that the layout is wide open and the tables closely spaced, the simple decor makes the space feel intimate and cozy. As it was a lazy Saturday, we started our meal with a couple of cocktails: a mimosa ($9) for my friend, and a “Ruby My Dear” ($10) for me. The former nicely fit the mimosa bill, and the latter was a beautiful pink concoction of grapefruit vodka, elderflower liqueur, grapefruit and lemon, served in a martini glass with an expertly half-salted rim.

My lunch choice for this meal was the steak sandwich ($15) with the soup of the day, tomato gorgonzola, as a side. My lunch partner chose the crab cake sandwich ($15) with a side of house fries. The steak sandwich consisted of shaved New York strip with sauteed onions and jalapeno blue cheese. The steak itself was tender and flavorful, and there was a good ratio of meat to bread. A larger portion of onions and blue cheese would have provided more contrasting texture and flavor balance to the sandwich, but I enjoyed it overall. The surprising highlight of my meal was the tomato gorgonzola soup. I am not normally a fan of tomato soup, but this was both tangy and velvety, with the gorgonzola lending its unique funkiness to the mix.

The crab cake sandwich plate was an unmitigated success. Called the “Colossal Lump Crab Sandwich,” it lived up to its name, with the sizeable patty formed out of large chunks of whole crab meat, lightly seasoned to bring out its delicate sweet taste. This was topped with a caper remoulade to add a bit of tang and moisture, as well as tomato and fresh sprouts. I’m often disappointed with restaurant crab cakes, but this was a rare exception. The fries were, once again, perfectly executed.

I should also note that the service on these two occasions, and in fact on every occasion I have eaten at The Black Hen, was outstanding. The waitstaff are knowledgeable about everything on the menu, attentive without being obtrusive, and generally pleasant to talk to as fellow humans. With the few exceptions and minor preferences noted above, lunch was a dining experience every bit as pleasant as dinner. Ingredients were fresh, plates well executed, and the menu innovative. And while you can still spend a little more on full plates, there are also a number options in a lower price range. I’ll definitely be going back, and if it’s a lazy Saturday, you will likely find me with a Ruby My Dear in front of me and a side of house fries close at hand.