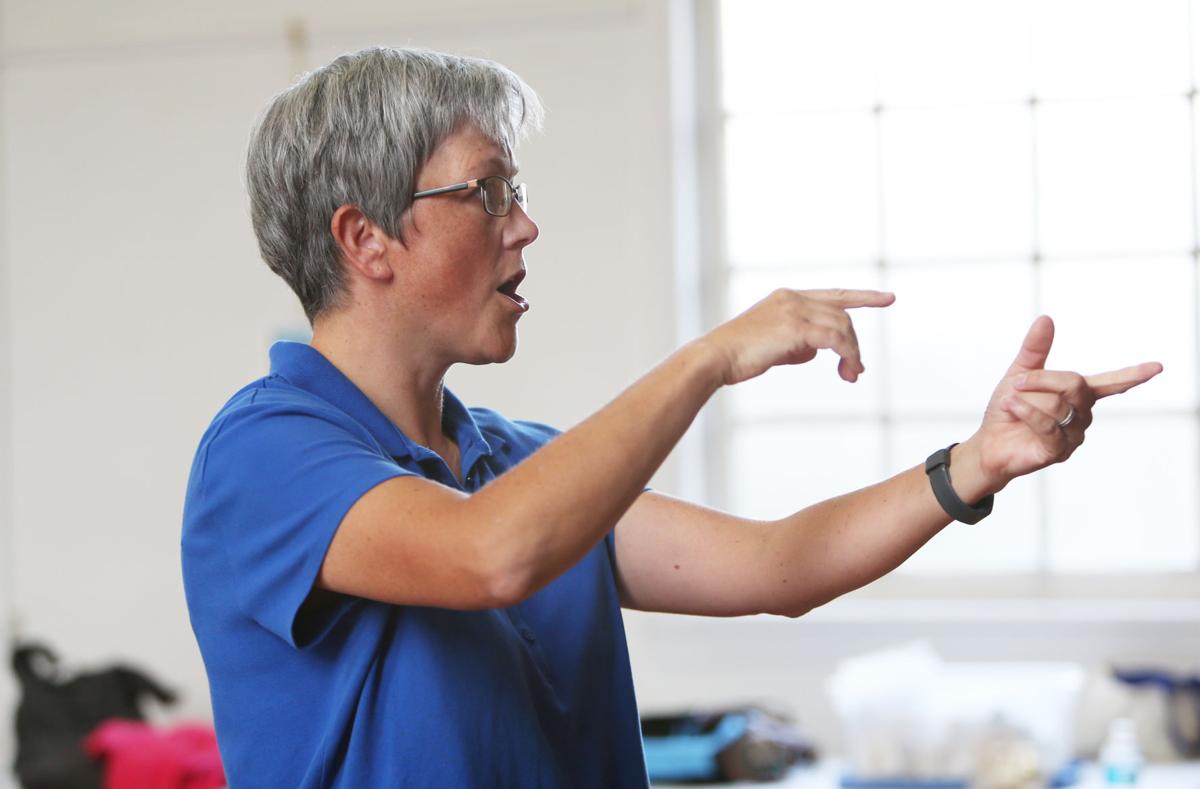 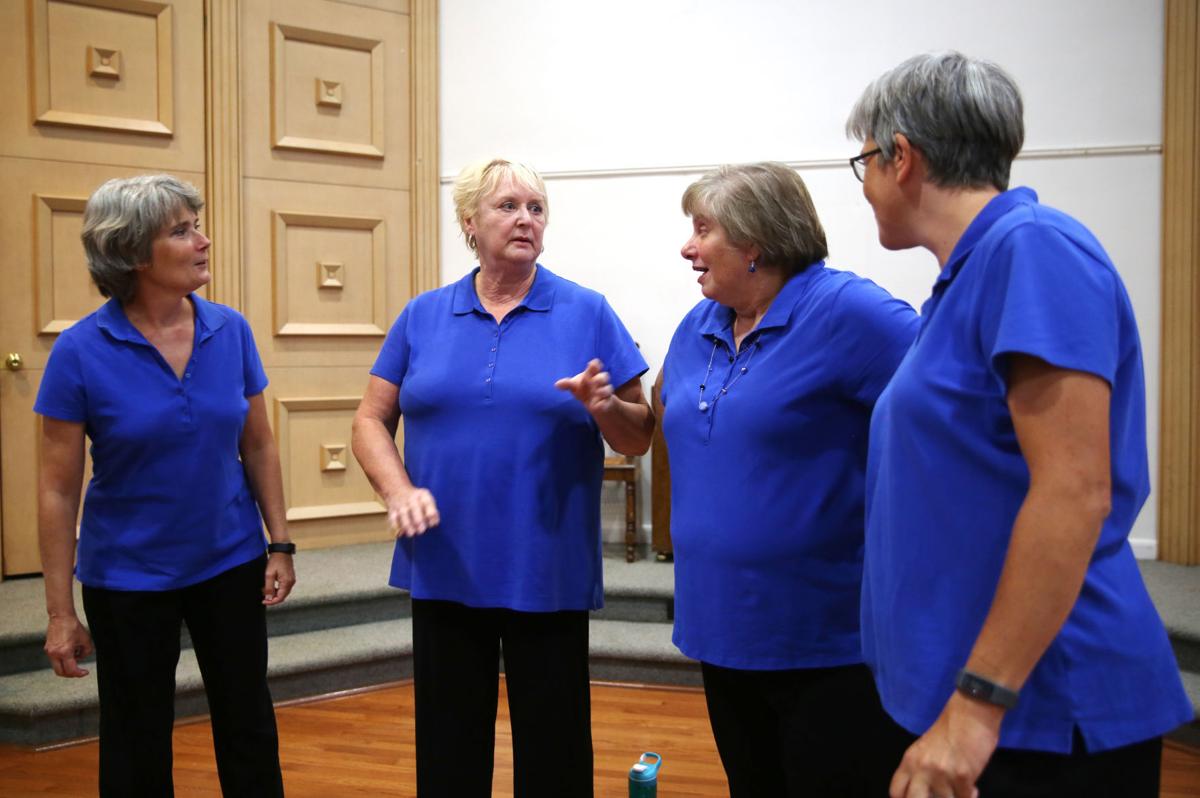 From left: Wendy Newman, Joyce Beliveau, Linda Sherman and Celie Holmes have a quartet called, “Capriccio,” a subgroup of the Star City Sounds Chorus. Beliveau founded the chorus in 2006. 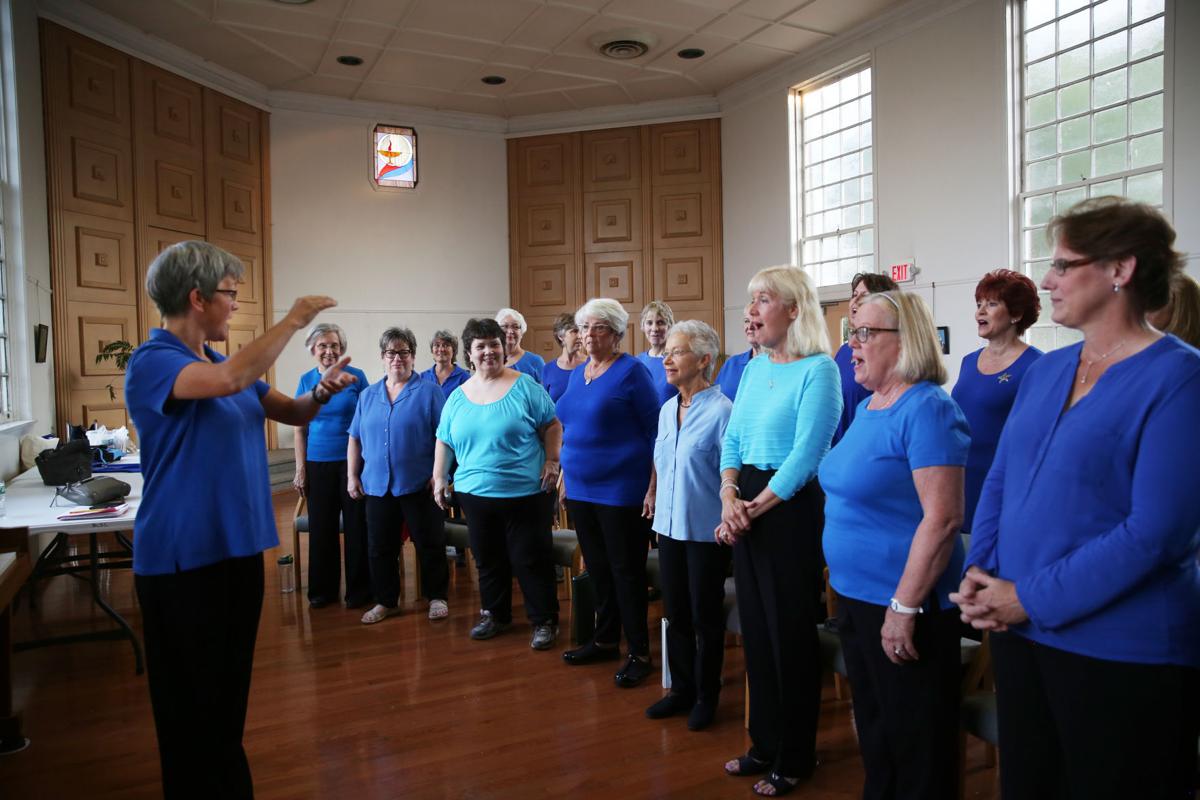 The Star City Sounds Chorus, an all-woman a cappella group in Roanoke, rehearses for their Saturday night concert in Fincastle. 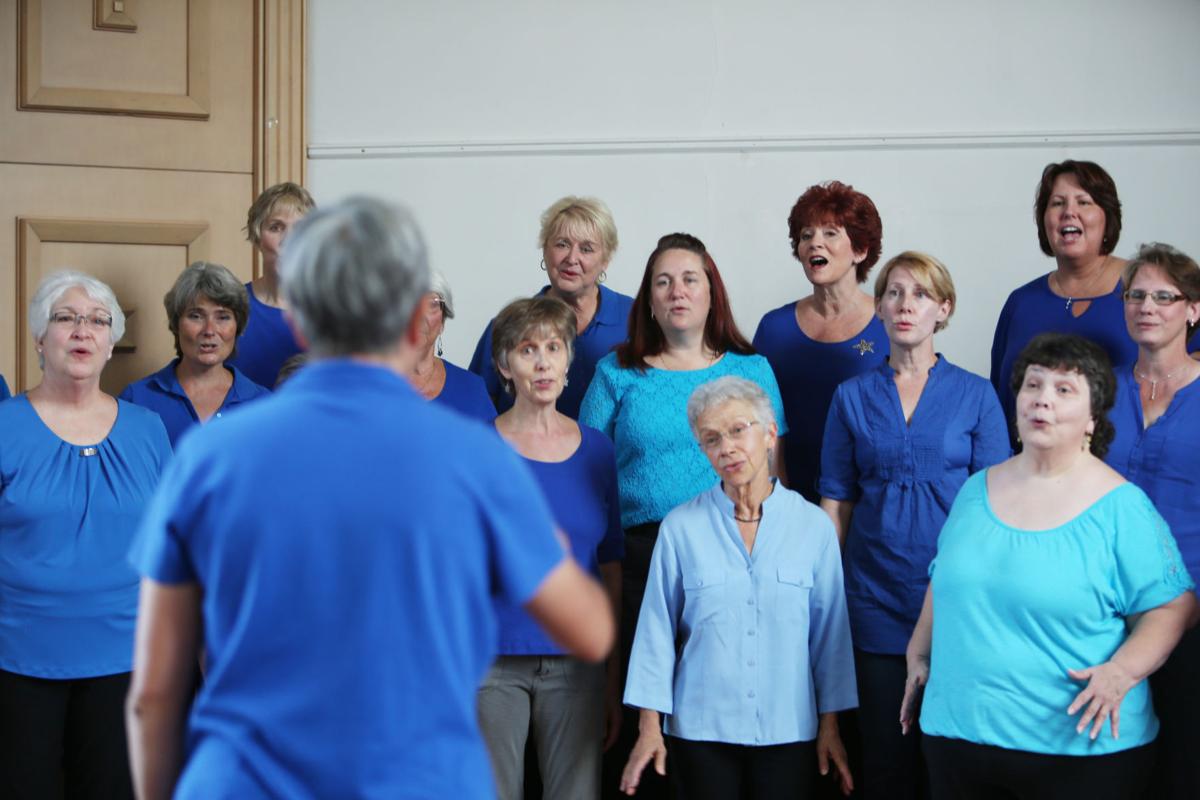 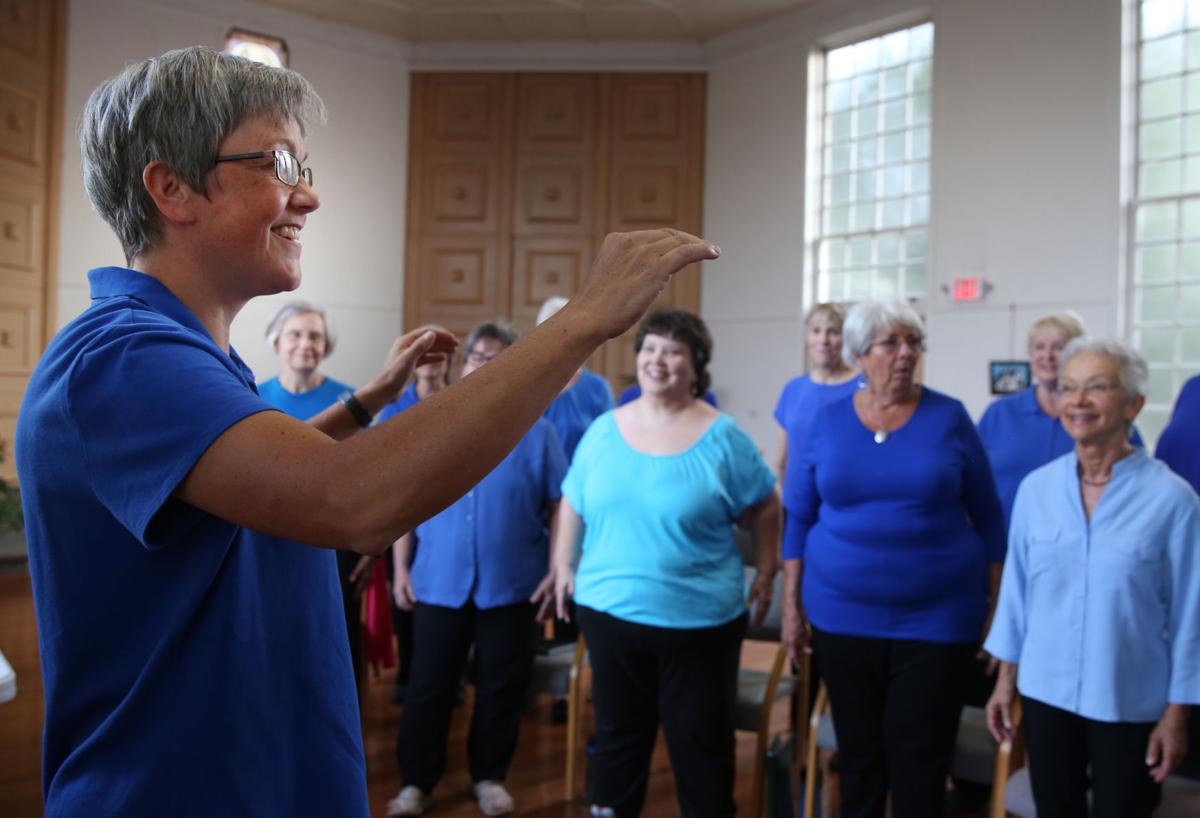 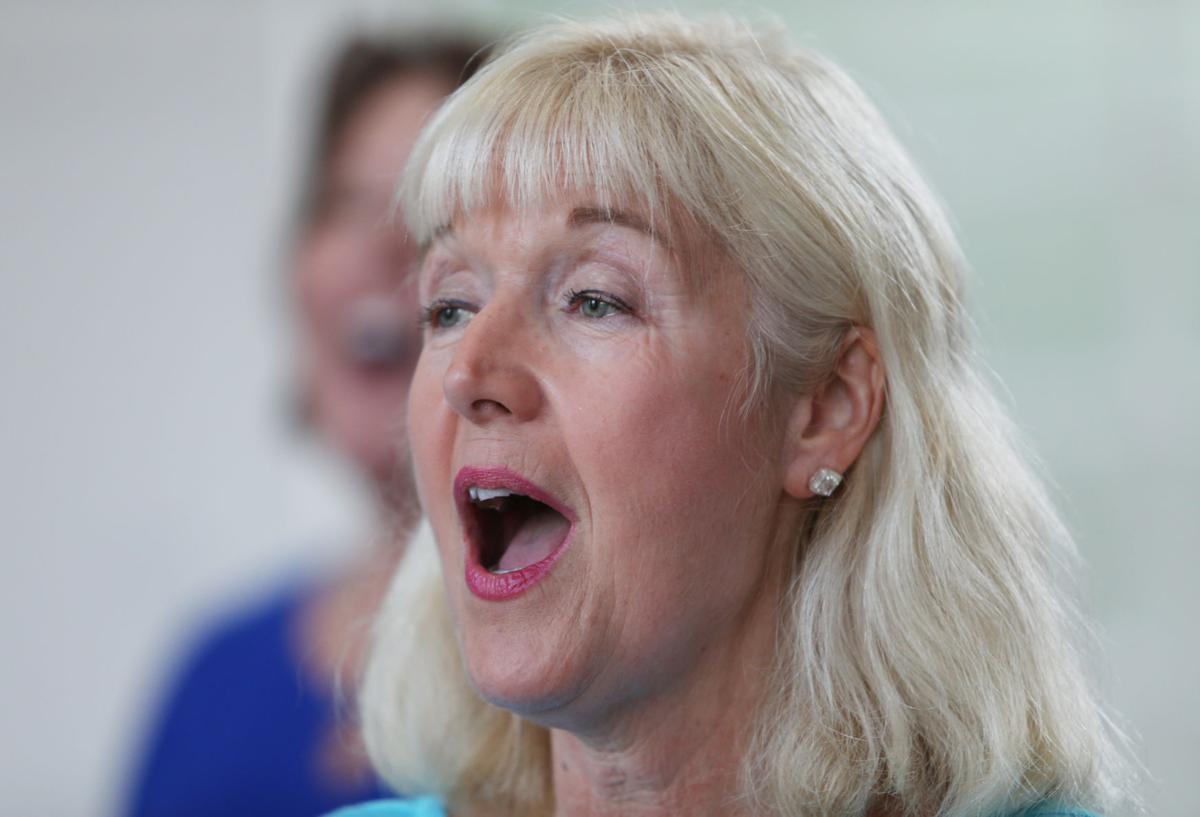 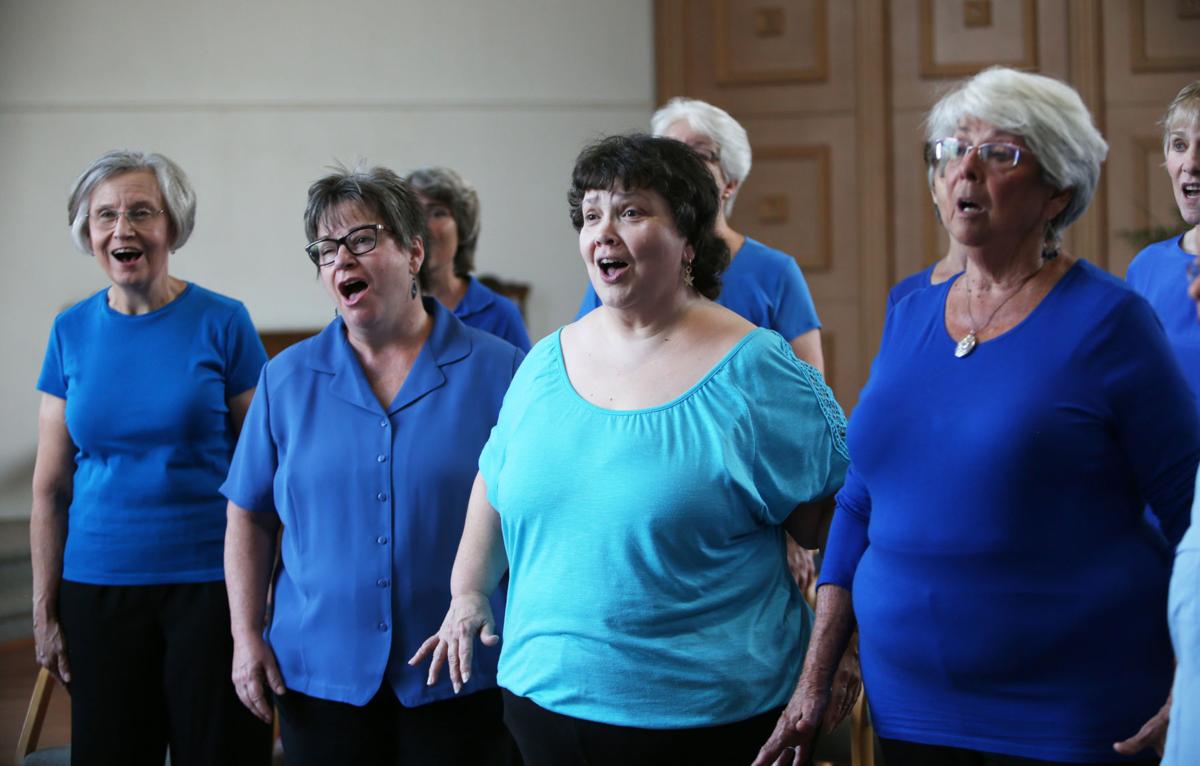 Twenty women raised their voices in a four-part harmony rendition of the 1940 big-band hit “Tuxedo Junction.”

The group paused several times during the rehearsal to fix small mistakes in the complex arrangement.

“Don’t tell anyone about this,” joked Celie Holmes, the director of the Star City Sounds Chorus. “This’ll be perfect on Saturday.”

As if to prove the point, the chorus followed with a rendition of the Mamas & the Papas’ “California Dreamin’” that went without a hitch.

Tuesday, the group practiced in the Unitarian Universalist Church at Brandon Avenue and Grandin Road. All of them were in “uniform” — shirts and blouses in various shades of blue.

The music is modeled on men’s barbershop harmony music, with bass, baritone, tenor and lead parts, all sung an octave higher. Selections date from the 1920s to the 1970s.

Beliveau remains a member of the group but ceded the director’s chair to Holmes in 2009 in order to concentrate on her business.

Originally from Norway, Holmes comes from a musical family. She moved to the Roanoke Valley when she was 19 and sang in a choir at Roanoke College when she attended there.

Sherman’s husband, Jim, and son, Ben, both sing in the Virginia Gentlemen. She had served more than once as interim director before the group asked her to become their leader, she said.

The Virginia Gentlemen will perform as guests during the Star City Sounds concert.

Both Sherman and Holmes stressed that the groups they direct are actively seeking new members. Singers do not need to know how to read music to join.

Sherman said that Star City Sounds would love for visitors to stop in during “Guest Night,” their Sept. 20 rehearsal, and see what the group is about. Newcomers are always welcome at rehearsals, which begin 6:30 p.m. each Tuesday at Unitarian Universalist Church.

“This is the best group of women I’ve ever known,” Holmes said.

On the Arts & Extras blog

Carilion Roanoke Memorial Hospital will host its first patient art show from Nov. 4 to Dec. 15. Any patient who received care from a Carilion provider in 2015 or 2016 is eligible to participate. The show will be judged, with 19 prizes totaling $3,100 to be awarded. The deadline to register is Sept. 30. To learn more, visit blogs.roanoke.com/arts.

With Capriccio Ladies' Quartet and special guests the Virginia Gentleman

From left: Wendy Newman, Joyce Beliveau, Linda Sherman and Celie Holmes have a quartet called, “Capriccio,” a subgroup of the Star City Sounds Chorus. Beliveau founded the chorus in 2006.

The Star City Sounds Chorus, an all-woman a cappella group in Roanoke, rehearses for their Saturday night concert in Fincastle.