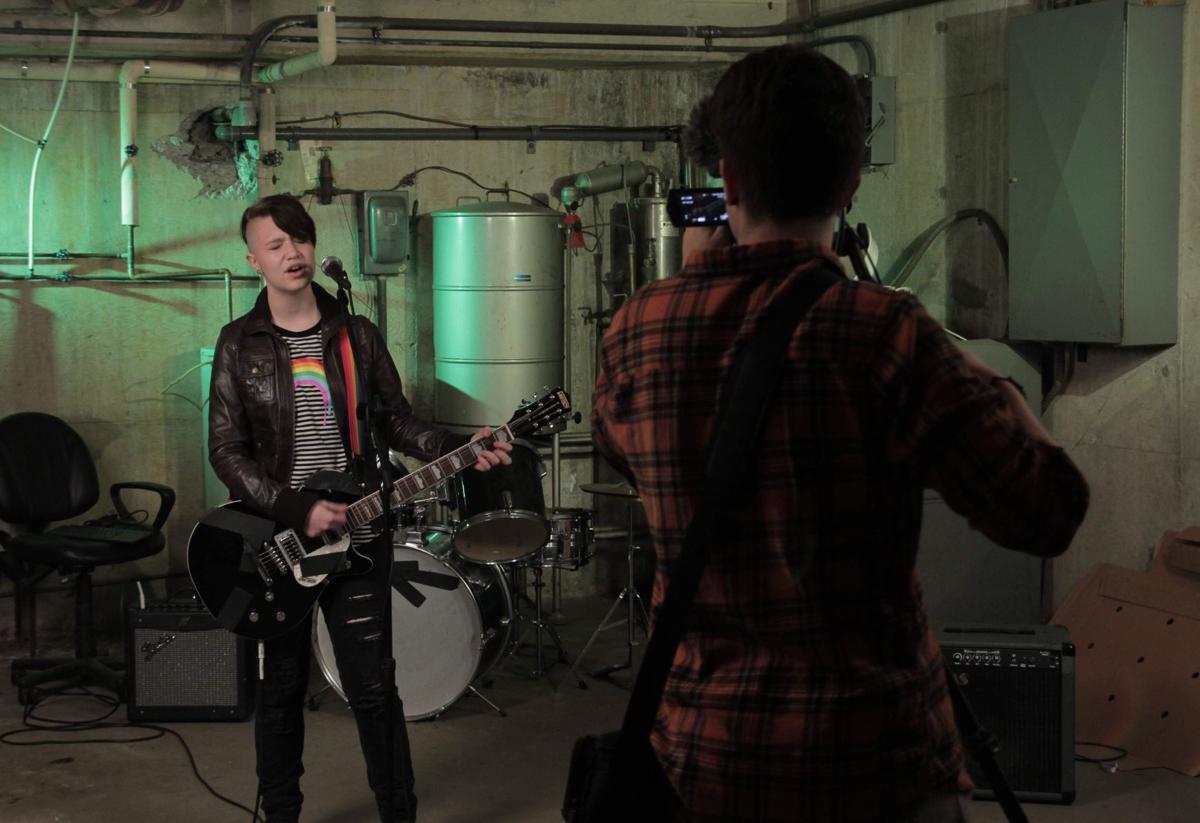 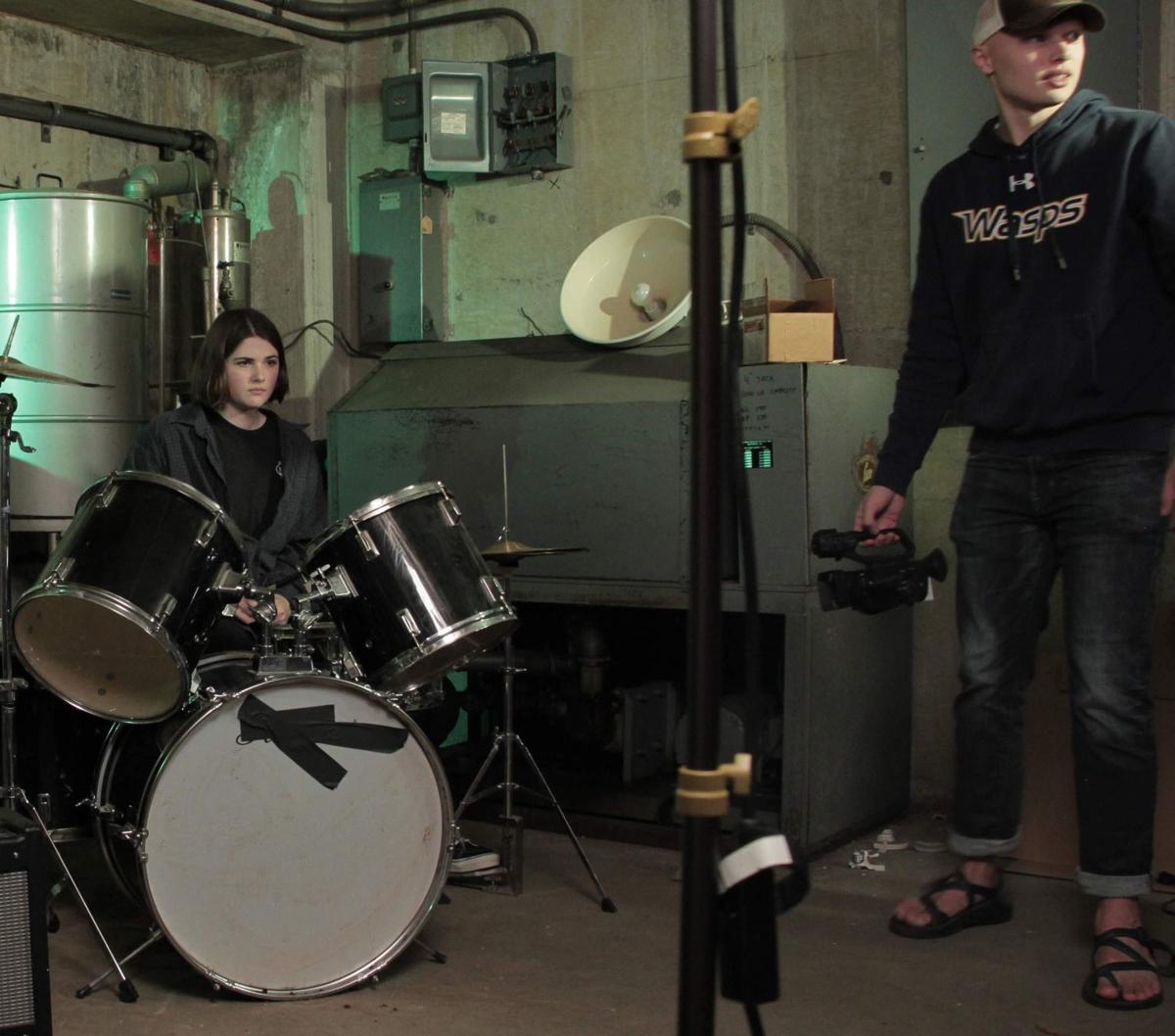 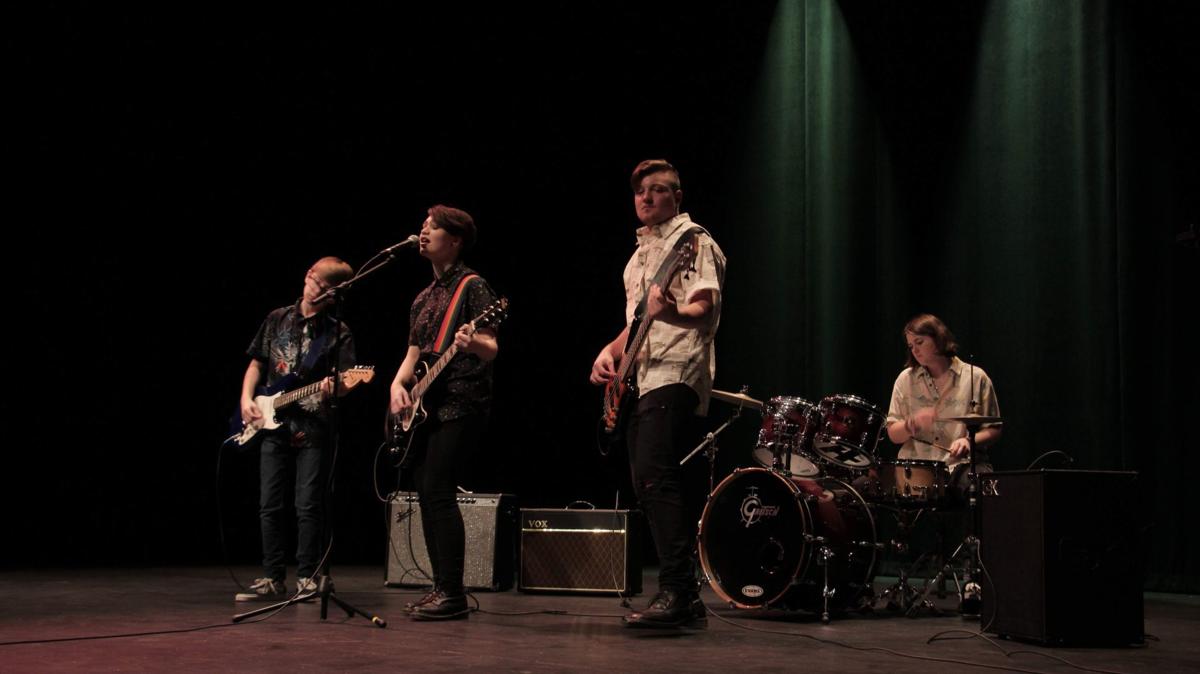 The members of rock band Her Majesty, all students in the Music Lab at Jefferson Center, perform for a music video being shot by students in the Grandin Theatre Film Lab. From left, Jack Martin, 13, guitar; Lily Byler, 15, vocals; Trent Wade, 17, bass; Hallie Weitzenfeld, 16, drums.

Roanoke Valley teens have been making music videos this fall, using the combined resources of the Grandin Theatre Film Lab and the Music Lab at Jefferson Center.

The film lab, in its third year, decided to give advanced students training in how to make that sort of short film. “In October and now into November, they’ve been working on actual music videos of their own.” The tunes that form the basis of the films “are original songs that were recorded by students from the music lab.”

Over the summer, the Grandin reached out to Jordan Harman, who runs the Music Lab. Teaming up with the Music Lab made practical sense.

“I’ve had the idea for a while that it would be cool for us to do music videos,” Lyon said. Working with pre-existing popular music could raise copyright issues that meant the videos might never be screened, so Lyon wanted to use original music. “There’s no reason why it shouldn’t be an actual, usable music video. We’ve got this other program that has kids making music. We have kids making movies. Let’s see what they come up with together.”

There are 15 students involved overall, 10 from the film lab and five from the music lab. The film lab students are split into two teams, one working with a four-piece rock band called Her Majesty on a song called “Track One,” the other working with solo singer-songwriter Sarah Wade, a 15-year-old student from Lord Botetourt High School, on a piece called “Girl in the Yellow Sweater.”

“One of them is more like a performance music video where the band’s rocking out the whole time,” Lyon said. “The other one has a narrative element to it.”

The music videos are expected to be finished by Tuesday, and they’ll be screened at 6 p.m. that day in Fostek Hall at Jefferson Center. Admission to the screening is free. Students will talk about their experiences after the films are shown.

An after-school program that began in 2016, the Grandin Theatre Film Lab is meant to give teenagers hands-on experience in film production. In fact, it’s modeled on Jefferson Center’s music lab. Grandin Foundation Executive Director Ian Fortier previously worked at Jefferson Center, and has said he brought the idea with him when the nonprofit movie house hired him in 2014.

The film lab students will soon have other assignments to work on. “Our beginner students, they learn production concepts and topics. They’ll learn about lighting, camera, sound, editing, screenwriting, the building blocks of what goes into a piece, and then they put it all together at the end of the year with a little short film of their own,” Lyon said. With advanced students, “we explore either a mode or a style of filmmaking,” such as documentaries or music videos. “We’re going to look a little more closely at horror films coming up later in the year.”

Lyon intends to show the students examples of classic movies that illustrate different types of archetypal cinematic horror genres, such as creature features, silent films and zombie movies. “I’m hoping, at the end of it, they’ll have to draw a style of horror out of a hat, and shoot a scene in that style.”

For more about the Grandin Theatre Film Lab, call 345-6377 or visit grandintheatre.com.

The Grandin Theatre will host a special screening Tuesday at 7 p.m. of a biopic with a Roanoke connection.

Actress and author Sybil Rosen, a 1968 graduate of Patrick Henry High School, met folk and country artist Blaze Foley (born Michael David Fuller) in the early 1970s while she was a part of the Banning Mill theater troupe in Georgia. Rosen became Foley’s lover and muse. Back then, he went by the nickname “Deputy Dawg” and had not written the song he remains best known for, “If I Could Only Fly,” which would become well-known in 2000 when recorded by Merle Haggard, 11 years after Foley’s death by shooting.

Directed by Hollywood actor Ethan Hawke, indie film “Blaze” is based on Rosen’s memoir of her time with Foley, “Living in the Woods in a Tree,” first published in 2008, now updated with a forward by Hawke. Rosen and Hawke share screenwriting credit for the movie. Rosen also acts in the film, playing her own mother.

Rosen will be present at the screening to give a talk and sign copies of her book. “Living in the Woods in a Tree” is also for sale in Book No Further inside 16 West Marketplace in downtown Roanoke.

Admission to the screening is $9.75. For more information, call 345-6377 or visit grandintheatre.com.

Saturday at 8 p.m., Roanoke Symphony Orchestra will join the Roanoke Ballet Theatre at the dance company’s studio at 1318 Grandin Ave. S.W. The show will be preceded by a wine tasting, and the performance will also feature dancers from Washington and Lee University. RBT plans to perform a piece made in collaboration with the Taubman Museum of Art that ties into the “Drive! Iconic American Cars and Motorcycles” exhibition. Admission is $16. For more information, call 345-6099, email rbtoffice@roacoxmail.com or visit http://roanokeballet.org.

The members of rock band Her Majesty, all students in the Music Lab at Jefferson Center, perform for a music video being shot by students in the Grandin Theatre Film Lab. From left, Jack Martin, 13, guitar; Lily Byler, 15, vocals; Trent Wade, 17, bass; Hallie Weitzenfeld, 16, drums.