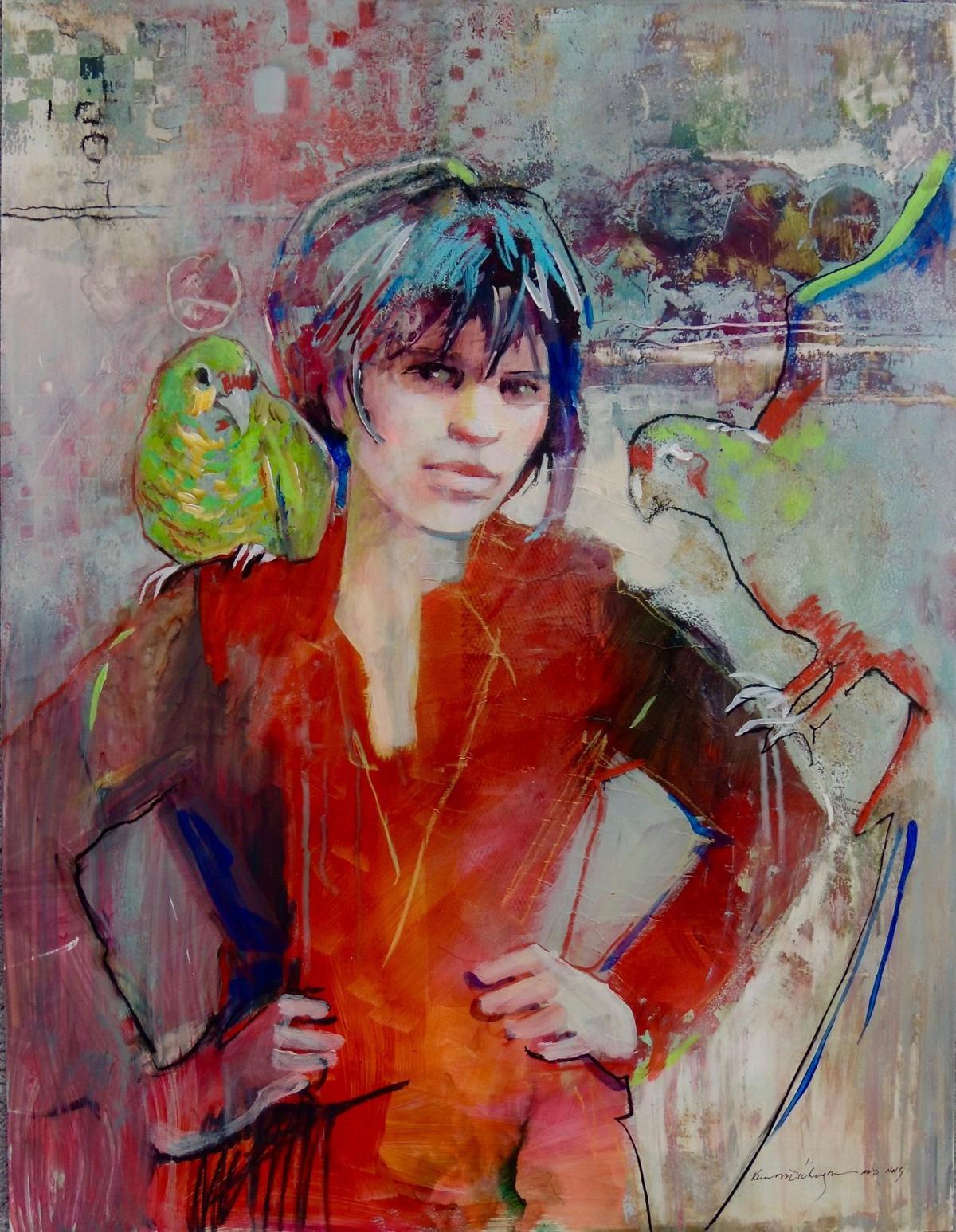 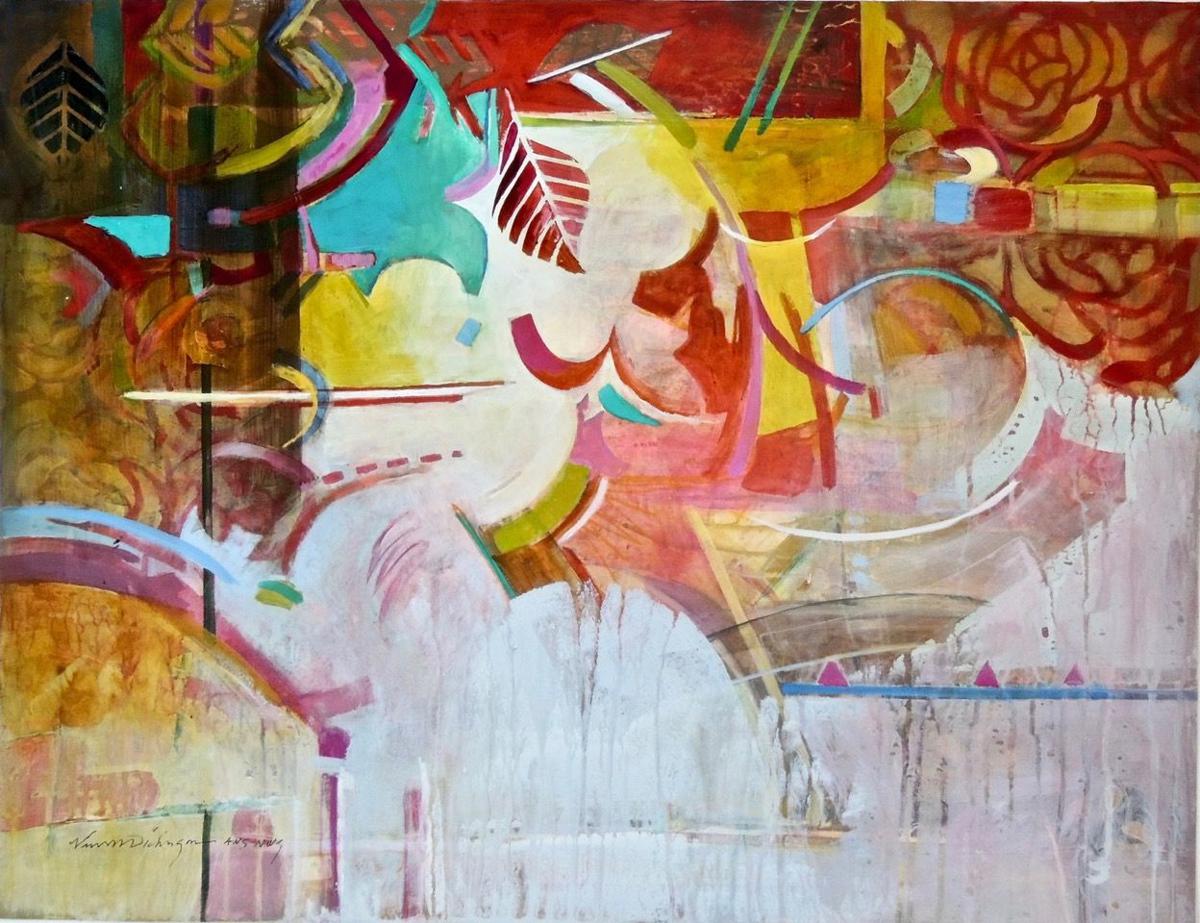 Dickerson created “Autumn Breezing” to go with an article on her step-by-step process, published recently in the French magazine The Art of Watercolour.

Vera Dickerson’s award-winning painting, whimsically titled “My Lovely Parrot Head,” has its origins in the striking outfit a student wore to one of her art classes.

The young woman Dickerson met about three years ago was wearing what the artist described as “glam goth” clothing and makeup. Dickerson immediately thought she’d make a great subject for a drawing or painting.

The artwork that ultimately resulted won the best in show award at the Virginia Watercolor Society 39th Annual Exhibition held at Roanoke College’s Olin Hall Galleries in September and October, and this month the piece appeared in the pages of Watercolor Artist magazine, along with 20 other award-winning paintings from all over the country.

As it happens, another new journal issue also prominently features Dickerson’s art. The Art of Watercolour, an English-language magazine published in France, reproduces a couple more of her paintings and shows a step-by-step demonstration of how she created a third, called “Autumn Breezing.”

Dickerson, 72, says the attention is heartening. “As artists I think we always are hoping for approval and are a little insecure about what we’re doing because it’s putting all of our emotions out there and how we feel about things. So it’s really nice to get a big pat on the head,” she said with a laugh.

The email from the French magazine requesting her work arrived the Thursday before Open Studios Botetourt, she said, adding a bit of pressure to both deadlines. She created “Autumn Breezing” specifically for the magazine. “I was up at 5:30 for about five mornings to get some painting done before other things happened. It was just one of those opportunities I didn’t want to let slip by.”

A Pulaski County native who now has her home and studio in Troutville, Dickerson joined the art faculty of Virginia Western Community College in 1972 — a job she took after a short stint teaching in upstate New York. “Too much snow,” she said.

A fixture in the Roanoke Valley art scene for decades, she 28 years ago co-founded the Studio School, a nonprofit offering art classes for children and adults, recently relocated to Towers Shopping Center from its longtime site along Brambleton Avenue Southwest.

At present there are eight teachers, all well-known regional artists. Dickerson is the only founder still involved. Her co-founders, Mimi Babe Harris and the late Peyton Klein, were also teachers, Harris at Virginia Western and Klein at the Roanoke Museum of Fine Arts.

The launch of the Studio School resulted from a realization that “our favorite students really were some of the older students, not necessarily those looking for a degree, but just simply wanting to learn how to express themselves better,” Dickerson said.

Dickerson has twice served as president of the Virginia Watercolor Society, which makes it a little surprising that her preferred medium is acrylic. “Most of the organizations dealing with watercolor are broad enough to say anything that dissolves in water qualifies,” she said. “Virginia Watercolor thankfully is one of those that says ‘any aqueous media.’”

Her paintings tend to emphasize red, her favorite color — “It’s vibrant and it’s full of energy” — and mix people and faces with backgrounds made from repeating patterns. “Quite often I’ll make my own collage paper with some stencils and some stamps. I think that people’s eyes are drawn to shapes that repeat.”

“My Lovely Parrot Head” serves as a prime example. Though the woman in the painting does resemble the model, “it’s not really a portrait.”

For one thing, there were no parrots in the original photos. “I thought the figure needed something other than just standing there. Ravens I think are overused — so maybe parrots.”

Dickerson created “Autumn Breezing” to go with an article on her step-by-step process, published recently in the French magazine The Art of Watercolour.