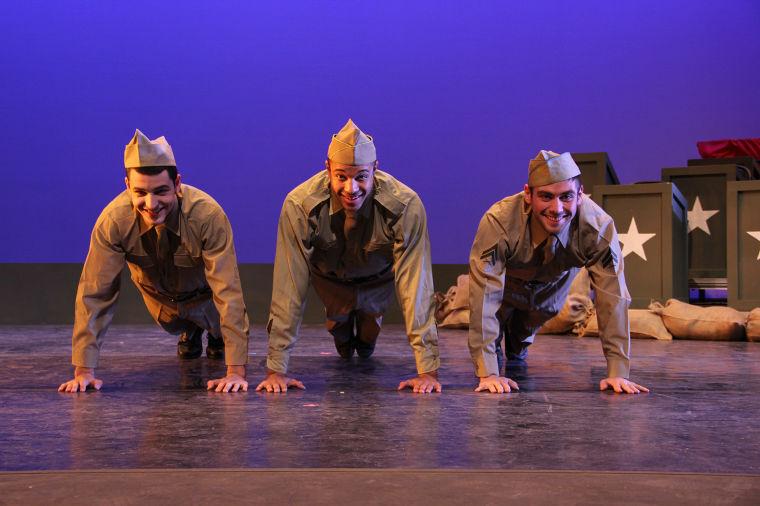 Radford students Matthew Robinson, Marcus Wooling and Caleb Waybright portray World War II soldiers in Radford University’s “Keep This For Me.” Associate professor of dance Amy VanKirk was inspired to create the musical after discovering her maternal grandfather’s 14-page journal of his time overseas during the war. 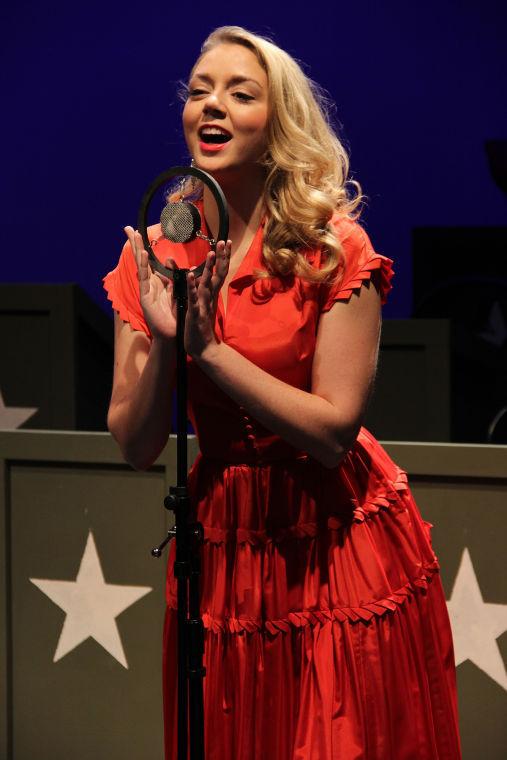 Radford student Lauren Faulkner is a featured soloist in “Keep This For Me.” 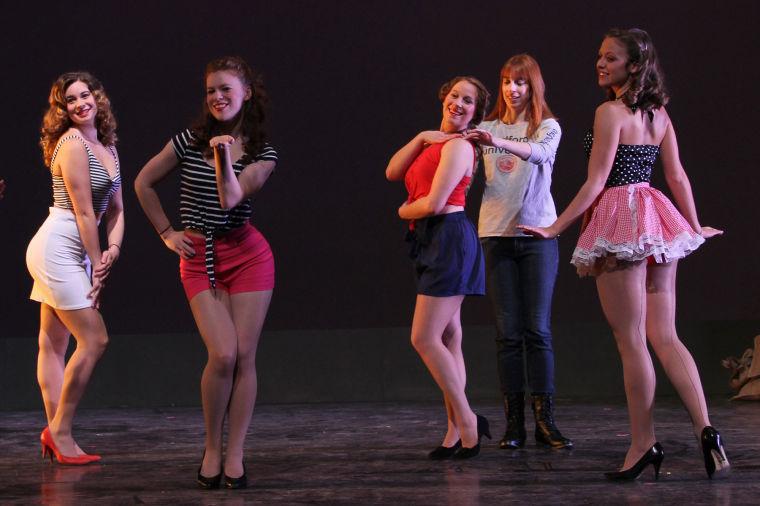 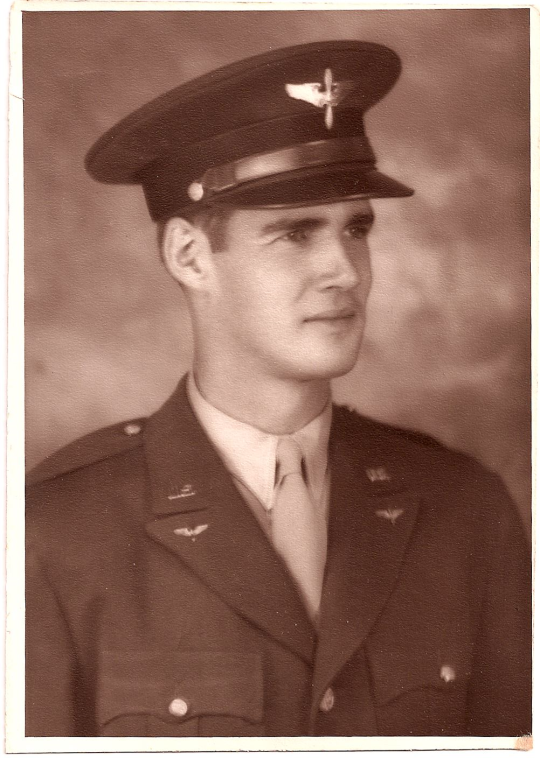 Amy VanKirk's maternal grandfather, Stephen O'Brien, left a 14-page journal of his time overseas during World War II. The journal inspired VanKirk to create "Keep This For Me." 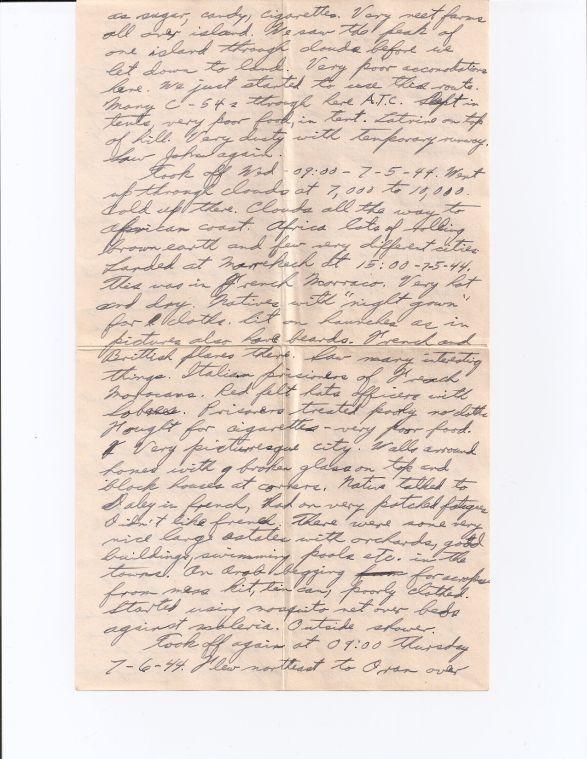 One of the pages of the journal of Stephen O’Brien, pictured above. The pages, as well as photos and archive film footage, are projected in the background during “Keep This For Me.”

An envelope that no one in the family had ever opened held an improvised handwritten journal, 14 loose pages that contained Stephen O’Brien’s chronicle of his tour of duty in Italy during World War II.

An associate professor of dance at Radford University, VanKirk never got to know her grandfather, who died in 1983, the year she was born. “This made the journal find even more special,” she said.

On Jan. 30 in Radford University’s Pridemore Playhouse, a new musical inspired by her grandfather’s notes, “Keep This For Me: Memories of the Last World War,” will take a look at that era in American history through the eyes of the men overseas and the women at home.

The show involves all five departments within the university’s College of Visual and Performing Arts, and the history department of the College of Humanities and Behavioral Sciences.

VanKirk, who joined Radford’s faculty in 2013, has spent a year working on the musical with assistant theater professor Tommy Iafrate. Iafrate was her sounding board, she said, helping her decide what material would be best for stage adaptation.

“To me, all of it’s interesting because it’s my family,” she said.

A native of Rochester, New York, VanKirk found the journal while studying for her master of fine arts degree at the University of Arizona. O’Brien’s terse, efficient notes describe what he saw and experienced as a mechanic in the U.S. Army Air Corps. The journal starts in 1944 and ends on May 8, 1945, Victory in Europe Day.

At a friend’s urging, VanKirk created a 20-minute dance production inspired by the diary. It became her master’s thesis. But she didn’t limit that show to her maternal grandfather’s memories.

Her paternal grandfather, Mart VanKirk, also served in the U.S. Army Air Corps in Italy, as a navigator. Both men had similar backgrounds, choosing their respective Army jobs after flunking pilot school. Her grandfathers believed they had likely crossed paths without realizing it, Amy VanKirk said.

Stephen O’Brien’s wife, Edith, worked as a pin-up model before she was married. After a closeup of her face appeared in a Kodak magazine, a member of a U.S. Navy Construction Battalion wrote her to ask, “How about a snap of the whole five-foot-six?” The letter was published in a newspaper beneath her picture. That story led Amy VanKirk to include a section in the play devoted to pinup models.

Meanwhile, Fran VanKirk, Amy’s only living grandparent, worked in a factory while her husband was in Italy. Her memories inspired her granddaughter to create a tribute to Rosie the Riveter.

All of these elements have been expanded to create “Keep This For Me.” But the show isn’t a narrative about VanKirk’s grandparents. “Our goal with the show was to take the words of my family, extrapolate from that and make it a show about everybody,” Amy VanKirk said.

The show begins on the home front with a reading of an enlistment letter accepting a soldier to the Air Corps (VanKirk said she found the same letter in both of her grandfathers’ belongings), then moves to Italy. It includes a section evoking a U.S.O. show, then concludes in Germany with the end of the war.

O’Brien’s journals describe the attractions of the places he visited, and also chronicle the death all around him. At one point, he became ill with a collapsed lung. In the entry where he recorded his recovery, he wrote, “Friday the 13th may be unlucky for some but it’s lucky for me,” his granddaughter said. He also noted a flight crew killed in a crash on the runway that day.

“Keep This For Me” balances light and dark, VanKirk said. The Radford University Concert Jazz Ensemble provides big band music, and the U.S.O. show includes numbers like “Sing, Sing, Sing” and “In the Mood.”

The show is not a part of the theater department’s regular season, so VanKirk had to seek her own funding. She received two grants from the university to help realize her vision, paying for research travel as well as sets, period-appropriate costuming and light and sound equipment.

The show’s marketing has reached out to such groups as the Wounded Warrior Project and regional chapters of the Veterans of Foreign Wars. “I’m hoping to get military young and old,” VanKirk said.

She especially hopes that members of her grandparents’ generation will see her tribute to what they went through. “This generation, there’s not a lot of them left,” she said.

Though no specific plans are in place yet, she’s hopeful that “Keep This For Me” will grow beyond its debut performance and will travel. “I’m hoping that it won’t be the end, that it will just be the beginning of the show.”

On the Arts & Extras blog

Floyd County-based Artemis Journal is seeking art, photography, poetry, fiction and essay contributions that relate to the theme “the courage of our convictions.” The deadline is Feb. 15. To learn more visit http://blogs.roanoke.com/arts.

'Keep This For Me: Memories of the Last World War'

The free-flowing attitude and audience interaction were fun. Grace Potter's voice, though, was the star.

Tawny Kitaen also starred as the fiancee to Tom Hanks' character in the comedy "Bachelor Party," and as Jerry Seinfeld's girlfriend in a 1991 episode of "Seinfeld."

A combination of changing COVID crowd regulations and audience feedback led to the change.

Out & About: Patrick Henry High School to livestream student performance of Tony-winning musical

Patrick Henry High School in Roanoke has ventured into the world of streaming theater productions.

Local Colors brings back its signature festival this month, as other arts and culture organizations also relaunch in-person events.

A federal judge on Wednesday allowed former reality TV star Josh Duggar to be released as he awaits trial on charges that he downloaded and possessed child pornography.

Radford students Matthew Robinson, Marcus Wooling and Caleb Waybright portray World War II soldiers in Radford University’s “Keep This For Me.” Associate professor of dance Amy VanKirk was inspired to create the musical after discovering her maternal grandfather’s 14-page journal of his time overseas during the war.

Radford student Lauren Faulkner is a featured soloist in “Keep This For Me.”

Amy VanKirk's maternal grandfather, Stephen O'Brien, left a 14-page journal of his time overseas during World War II. The journal inspired VanKirk to create "Keep This For Me."

One of the pages of the journal of Stephen O’Brien, pictured above. The pages, as well as photos and archive film footage, are projected in the background during “Keep This For Me.”