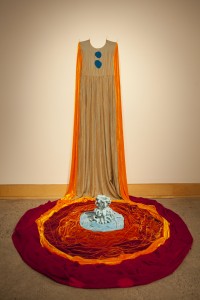 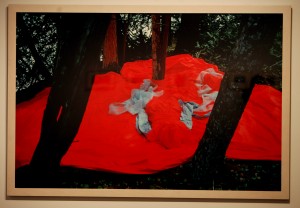 Or at least that's one way to interpret the giant dresses she creates that hang on gallery walls, their trains spilling out to cover large swaths of floor.

Museum director Amy Moorefield said that when she was a student at Virginia Commonwealth University in the 1990s, she saw an exhibition of Semmes' work at the Virginia Museum of Fine Arts. "It left an indelible impression."

That VMFA exhibition was curated by Margo Crutchfield, who was hired in June as the curator-at-large for the $94 million Center for the Arts at Virginia Tech, scheduled to open in 2013. On Nov. 29, Crutchfield will give a lecture at Hollins about working with Semmes.

Unlike some other artists who focus on women's clothing or craft items, Semmes' interests lie less in making political statements and more in taking things considered everyday objects and presenting them as sculpture.

"Historically these have been classified as women's work or what women would wear," said Moorefield. Though Semmes' work does touch on matters of gender and identity, Moorefield said, "I think she's more interested in landscape and how objects take up space."

Creating the dresses on a scale so large that they can't possibly be worn is part of what requires the viewer to consider them as art rather than clothes.

Click here to read the rest of the column.