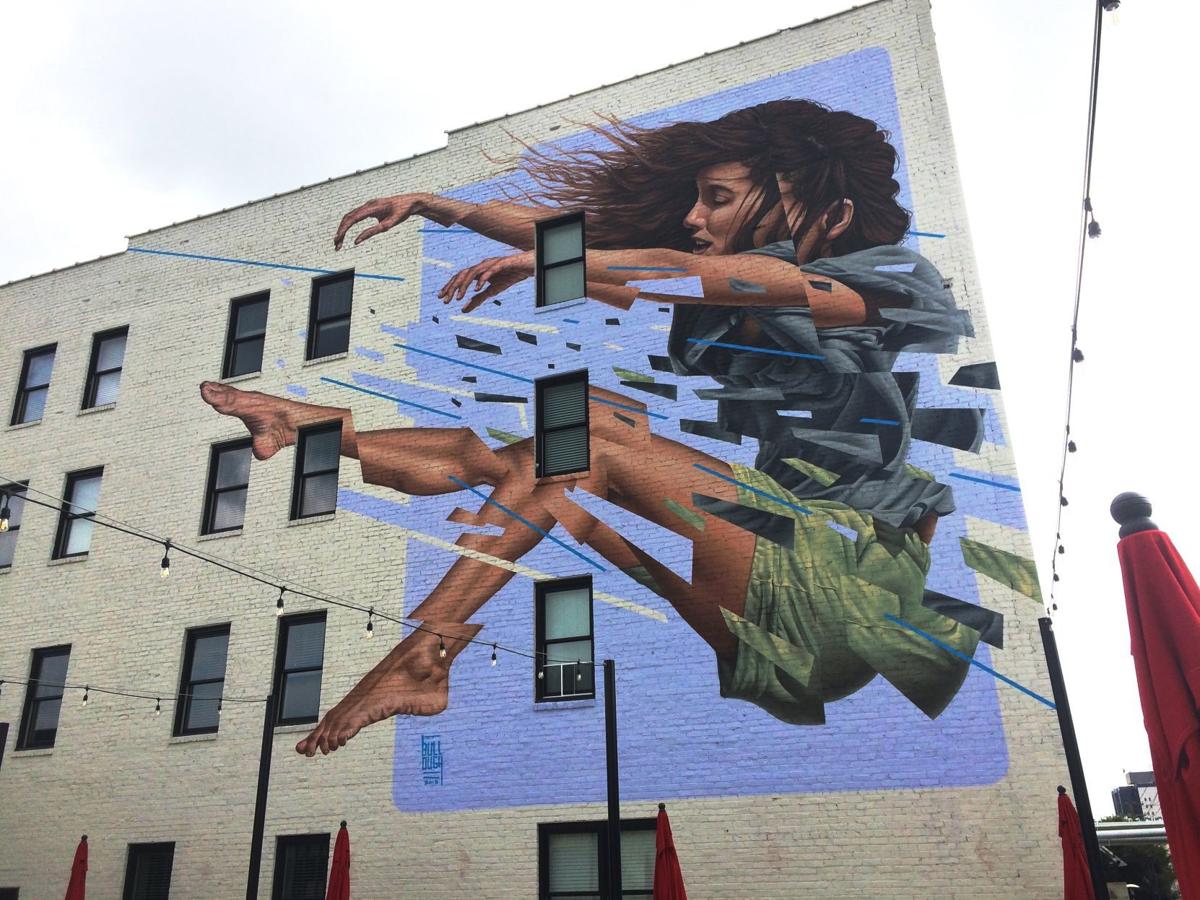 Berlin-based artist James Bullough has said the meaning of his mural in downtown Roanoke should be decided by the beholder. Building owner Bill Chapman interprets it as a depiction of a person in a dream state. 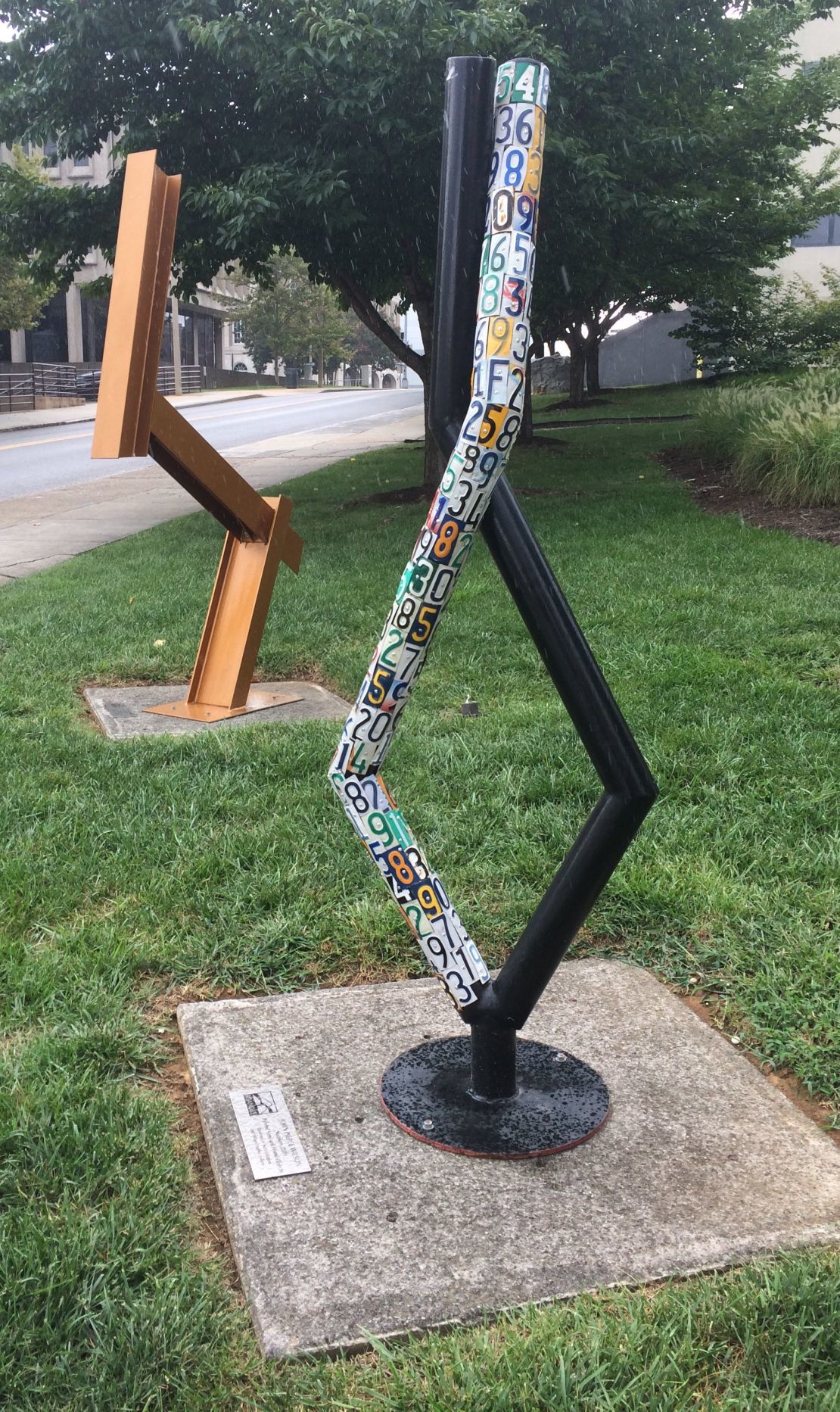 “Golden Angle” (left) and “Numbers” by the late John Wilson stand at the corner of Campbell Avenue and Third Street Southwest in downtown Roanoke. His wife, artist Suzun Hughes, gifted them to the city’s collection. 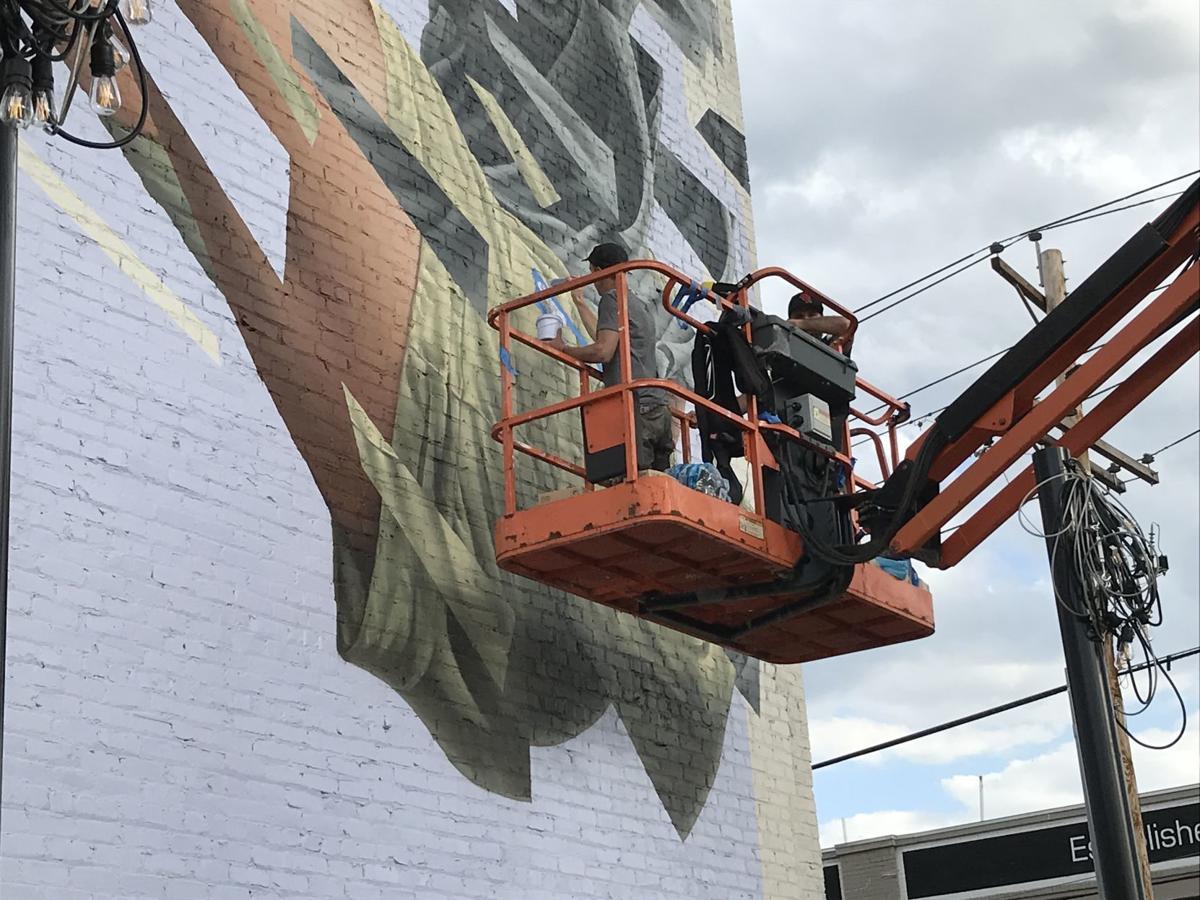 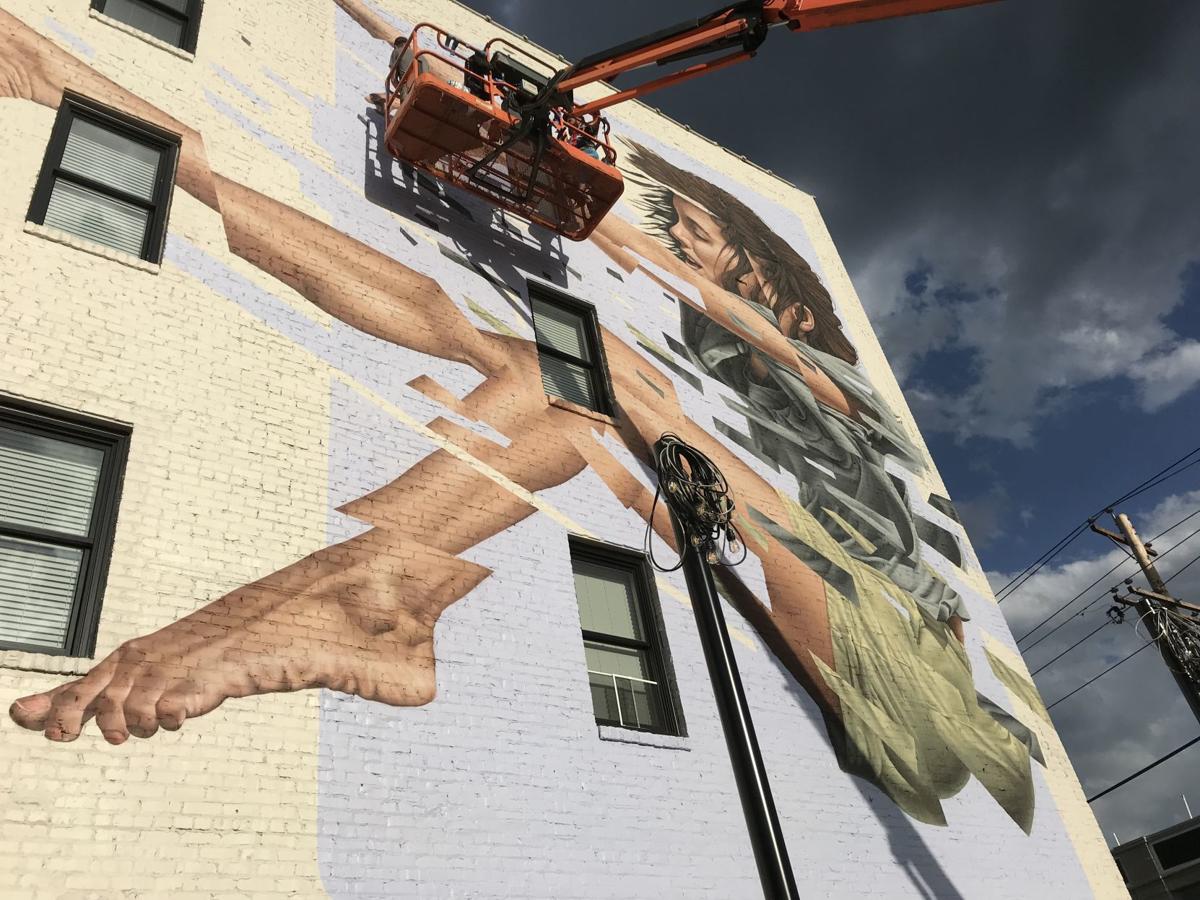 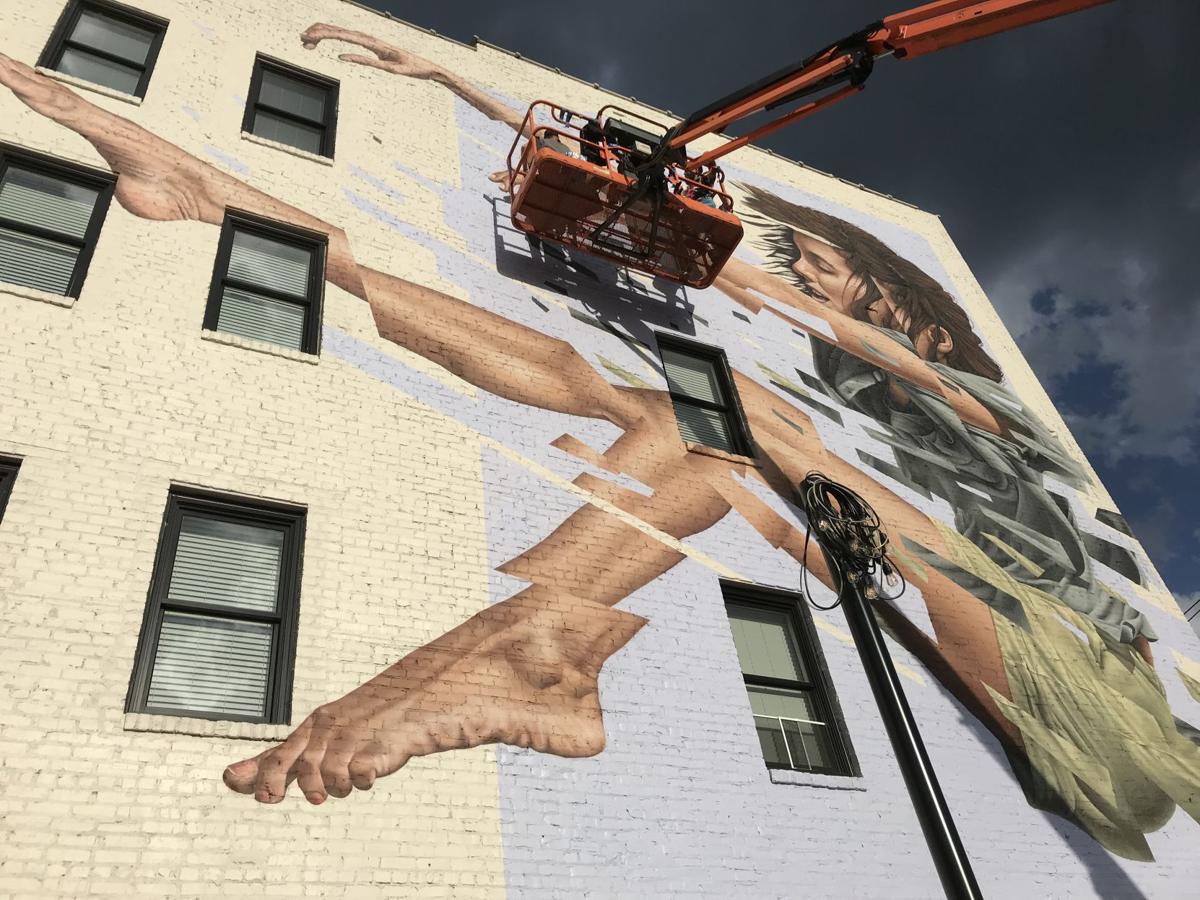 A privately commissioned mural has made for a striking and puzzling addition to downtown Roanoke since its completion in April.

I’ve had tongue-in-cheek conversations with co-workers and people in the arts scene about what exactly is going on with the three-story-high woman painted on the west side of The Lofts at West Station at 357 Salem Ave. S.W. Is she flying? Falling? Has she been tossed through a window?

Look closer and you’ll notice that the “shards” surrounding the woman are fragments of her own image — a common motif of American-born, Berlin-based street artist James Bullough.

The mural doesn’t have a title. The artist, who could not be reached for comment, habitually declines to explain what his paintings mean.

“When people ask me at the wall what it is, or what it means, or who the woman is, I turn it back on them,” Bullough said in a May interview with BrooklynStreetArt.com. “I ask for their thoughts, and inevitably their interpretations are far more elaborate and varied than I could have imagined.”

However, the man who hired Bullough, Richmond developer and Lofts owner Bill Chapman, suggested that though the image is photorealistic in its detail, it shouldn’t be taken literally.

“Like all good art, I think it’s up to interpretation,” Chapman wrote. “I see it as someone in a dream state, maybe entering another dimension without struggle or in a blissful kind of way.”

His first exposure to Bullough’s work came through the Richmond Mural Project, an annual event that recruited artists from all over the world to create 100 murals over a five-year period. Bullough’s 2015 mural, “Float,” painted at 620 N. Lombardy St., similarly depicts a gigantic, airborne, fragmented female figure.

“There is something about his work that combines force and peace in a way that fascinates me,” Chapman wrote. Starting in 2016, he reached out to Bullough about the possibility of painting a mural in Roanoke. Bullough was booked solid but didn’t say no. Chapman kept checking back until Bullough found a window in his calendar to come to Roanoke.

“We agreed on price and a date to fly him in from Berlin, then crossed my fingers hoping it would work out,” Chapman wrote. “It couldn’t have been a better experience.”

After minimal discussion, Bullough gave Chapman three designs to choose from. “I knew his work well and wanted something in line with his current focus. Human form, his process of showing motion and scale were discussed, and that was it. The last thing I wanted was to come across as heavy-handed; it needed to be entirely his work.”

In a video interview posted on Bullough’s website, the Washington, D.C.-raised artist talked about making the transition from teaching art to creating large-scale art in his mid-30s. “I loved my life, but I just felt like something was missing.” Because his wife was from Berlin, he had some familiarity with the thriving art scene there. “Very naively, I just assumed, I’ll move to Germany and become a successful painter, which should have never, ever happened, but somehow, by the stroke of God, it did.”

He got involved in the city’s street art scene, which had not originally been part of his plan. “It’s very rare that a 35-year-old man is jumping fences and starting his graffiti career, but I was like, ‘Who cares. Let’s try. Let’s see.’ ” The break that led to his international career in public art happened through the fine art side of his repertoire, when he was invited to participate in a 2015 group show at the Long Beach Museum of Art in California. “I painted the bangingest piece I’ve ever painted and put every ounce of energy into it, and people noticed.”

His Richmond and Roanoke murals are nowhere near the largest he has painted. A mural he painted in D.C. in 2017 rises about 13 stories. For more about Bullough, visit http://jamesbullough.com.

Two more additions to Roanoke’s public art offerings stand as memorials to a sculptor who made his home downtown.

John Wilson died in January at age 75. A Denver native, he and his wife, Suzun Hughes, a photographer and painter, moved to Roanoke from San Francisco in 2007 and became prominent figures in the city’s art scene. Works that Wilson contributed to the city’s public art collection include “Bike Rack Number 9” that stands on Grandin Road in front of CoLab Roanoke, and “Mutated Snail” along the Roanoke River Greenway in River’s Edge park.

Add to those works two more whimsical steel creations, “Golden Angle” and “Numbers,” donated to the city by Hughes and installed in early July at the corner of Campbell Avenue and Third Street Southwest.

The Grandin Theatre Foundation has announced a newly begun partnership with HomeTown Bank of Roanoke that will last through 2022. In exchange for prominent displays of the HomeTown logo on tickets and on the front-door box office — and on a star in the Grandin’s “Walk of Fame” — the nonprofit Grandin Village movie house gets an assist with its front lobby and movie offerings.

“The annual support will allow us to effect a minor increase in staff paid hours to support a concessions expansion, as well as take some risks with some one-off film screenings,” wrote Grandin Executive Director Ian Fortier.

HomeTown Director of Marketing Carolyn Kiser said in a statement, “We very much value the arts organizations in our area and are quite proud to have a unique cultural icon like the Grandin in our community.”

Lynsey Allie, museum manager for the combined History Museum of Western Virginia and O. Winston Link Museum, sent a note that the walking tours of Roanoke’s Norwich neighborhood planned in September have been canceled.

The tours were to accompany the photography exhibition “Roanoke Cotton Mills: Lewis Wickes Hine, Norwich, and the Fight against Child Labor” that remains on display through mid-November.

Berlin-based artist James Bullough has said the meaning of his mural in downtown Roanoke should be decided by the beholder. Building owner Bill Chapman interprets it as a depiction of a person in a dream state.

“Golden Angle” (left) and “Numbers” by the late John Wilson stand at the corner of Campbell Avenue and Third Street Southwest in downtown Roanoke. His wife, artist Suzun Hughes, gifted them to the city’s collection.