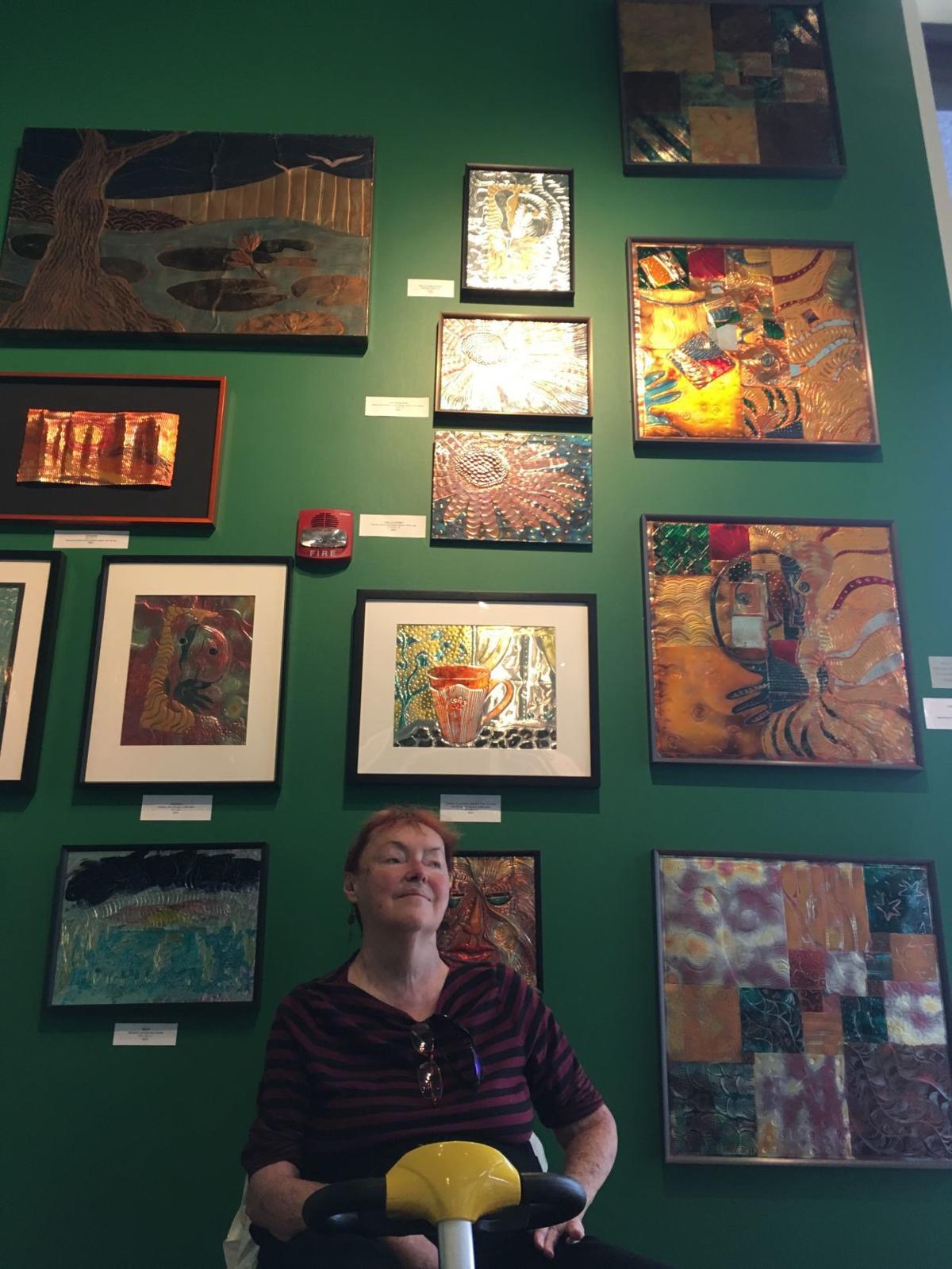 Darcy Meeker poses before several of her hand-tooled copper creations on display in her retrospective exhibition in the Roanoke Symphony Orchestra’s Green Room. 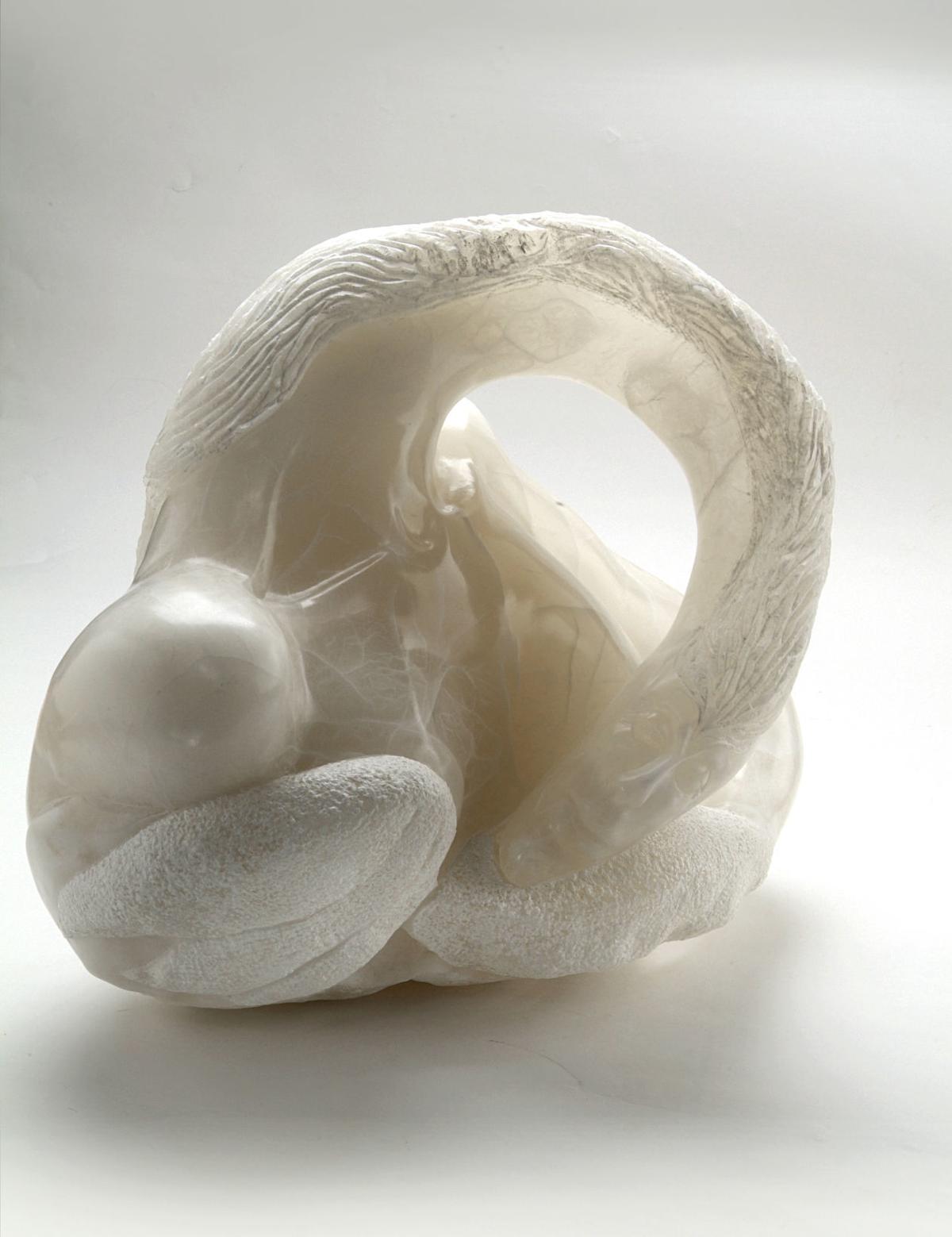 “Swan” by Darcy Meeker, an Italian alabaster sculpture based on the Greek myth of Leda. 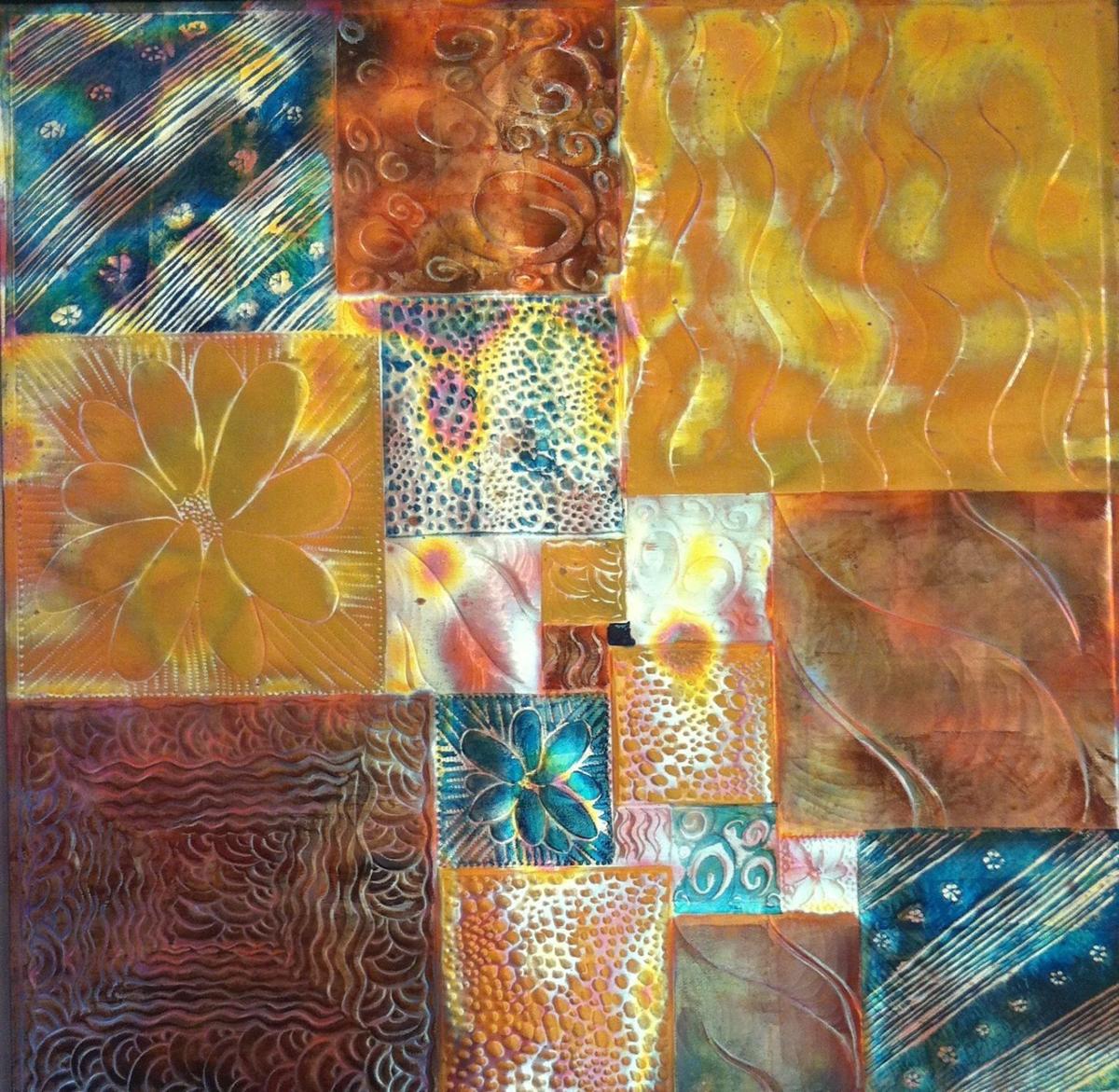 On of Darcy Meeker’s hand-tooled copper pieces, its effects akin to an abstract painting. 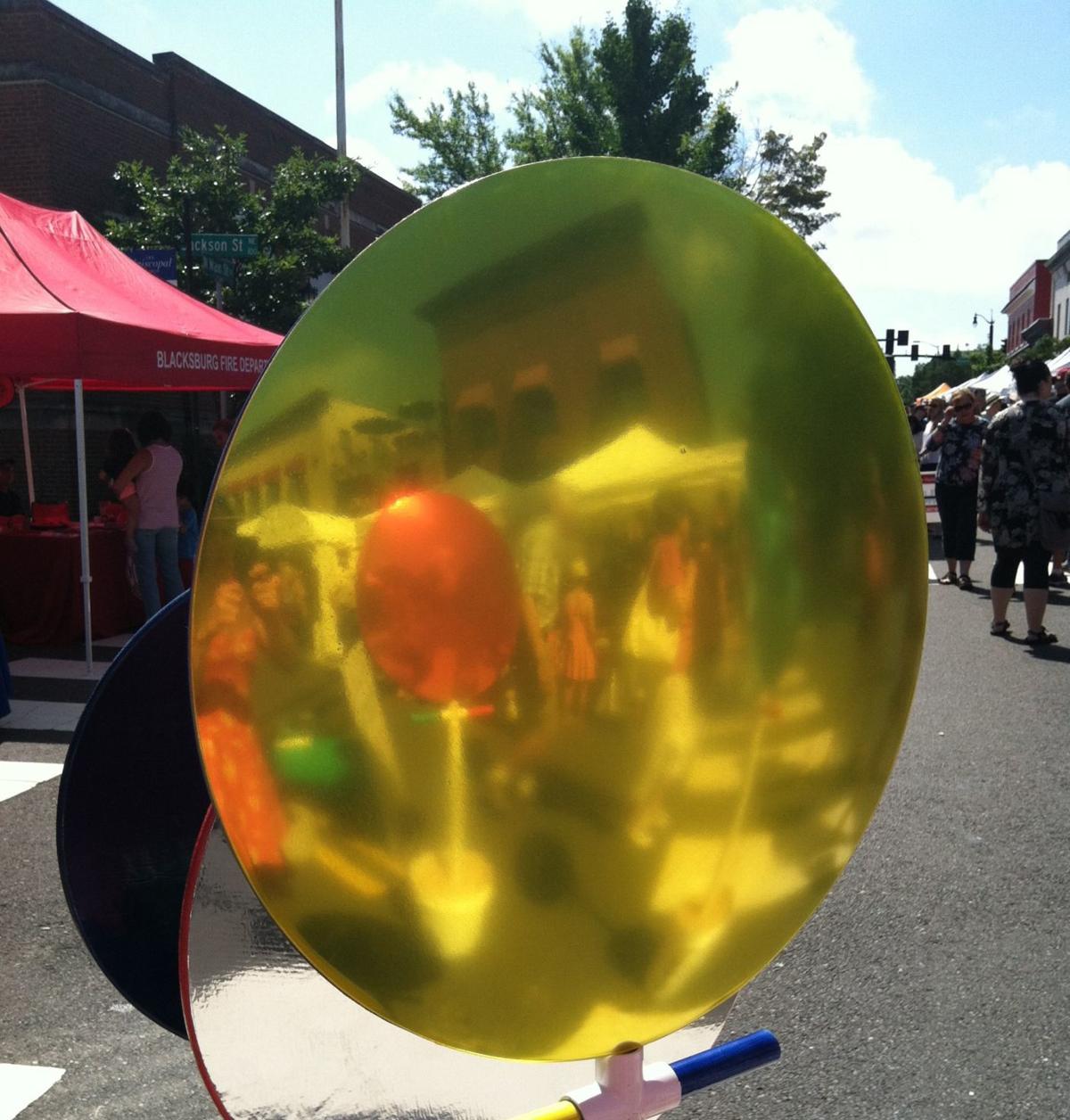 A lollipop-like sculpture, part of Meeker’s “The Color Project TM,” reflects passers-by at FloydFest in July.

Blacksburg artist Darcy Meeker makes metal sculptures and wall hangings, but her main objective is to sculpt with light.

She often works with hand-tooled copper, though she has also created graceful milk-white sculptures in Italian alabaster. A retrospective exhibition that expounds on her entire career fills the Green Room performance space in the Roanoke Symphony Orchestra offices at the corner of Campbell Avenue and Williamson Road in downtown Roanoke.

Though most of the more than 80 pieces in the retrospective show are scaled to fit indoors, Meeker has often worked at much larger scales. In 2008, she covered street lights in downtown Blacksburg with theater gel, the colored sheets of film used to cover theater lights to cast the stage in different hues. In July, a large installation born from Meeker’s interests in the play of light, “The Color Project TM,” delighted attendees at FloydFest 18. It included large reflective sculptures shaped like lollipops and a greenhouse with walls of translucent colored panels.

Meeker is interested in how the light mixes as it plays across surfaces of objects and faces of people. A number of the artifacts in her retrospective show literally reflect this interest, with color blending created by the interplay of light on reflective surfaces.

She first pursued journalism, inspired by Clark Gable’s Oscar-winning turn as a smart-aleck reporter in the 1934 romantic comedy “It Happened One Night.”

Meeker first took up art at age 44, while part of the agricultural extension communications faculty at the University of Florida in Gainesville. She made a face from clay, and was so captivated by the act of sculpting that she made at least 50 more. “My hands were getting hungry,” she said.

A stone-carving workshop sealed the deal for her, inspiring her to change careers, from journalistic writing to full-time art.

She and her husband, Jim Pease, whom she met at a Florida university conference, moved to Blacksburg in 1991. Now retired, Pease taught agricultural economics at Virginia Tech, while Meeker pursued sculpture.

Meeker has had to overcome health challenges to continue her artistic endeavors. She has muscular dystrophy and in 2011 had a stroke. Assistant designers and fabricators help make her creations, a common practice in the art world.

Her personal assistant, Elizabeth Shukwit, is also clearly one of her biggest fans. A transplant from New York who lives in Copper Hill with husband J.C. Stallings, Shukwit described Meeker as a combination of pop artist Andy Warhol and scientist Stephen Hawking. With a shake of her head, Meeker said “That’s crazy” in response.

“I like the fact that she is enthusiastic about me and my work and the things we can do,” Meeker said.

“The Color Project TM” is meant to be an ongoing effort, not just a single installation. Meeker and her team are seeking to create large-scale works involving light. As one example, Meeker has proposed an installation of light art for a plaza planned as part of renovations to the Melrose Branch Library, Shukwit said. City officials have not yet announced what proposal for the plaza will be accepted.

“Some of them are also based on working with municipalities to make cities safer,” Shukwit said. “The more light, the less chance someone has to do something shady.”

Meeker has had a busy year, and there’s no sign things are slowing. This week, she’s travelling to Santa Fe, New Mexico, to receive an award at the “CODAsummit” conference, themed “The Intersection of Art, Technology and Place.” In 2019, she’s scheduled to have an exhibition of “The Color Project TM” at the Alexander Black House & Cultural Center in Blacksburg.

Opera Roanoke has received a $250,000 donation given in memory of one of the nonprofit’s most significant supporters.

Roanoke attorney Joe Logan, a two-time Opera Roanoke board president, died May 30 at age 77. Former opera treasurer Tom Tielking has said that Logan “was far and away the most generous opera supporter for many years.”

The quarter-million-dollar gift, compiled by multiple anonymous donors, is meant to perpetuate Logan’s legacy, opera officials said in a statement. Opera Roanoke will rechristen its Maestro Award, an in-house award periodically given for significant contribution to the arts, as The Joseph D. Logan III Maestro Award.

Darcy Meeker poses before several of her hand-tooled copper creations on display in her retrospective exhibition in the Roanoke Symphony Orchestra’s Green Room.

“Swan” by Darcy Meeker, an Italian alabaster sculpture based on the Greek myth of Leda.

On of Darcy Meeker’s hand-tooled copper pieces, its effects akin to an abstract painting.

A lollipop-like sculpture, part of Meeker’s “The Color Project TM,” reflects passers-by at FloydFest in July.