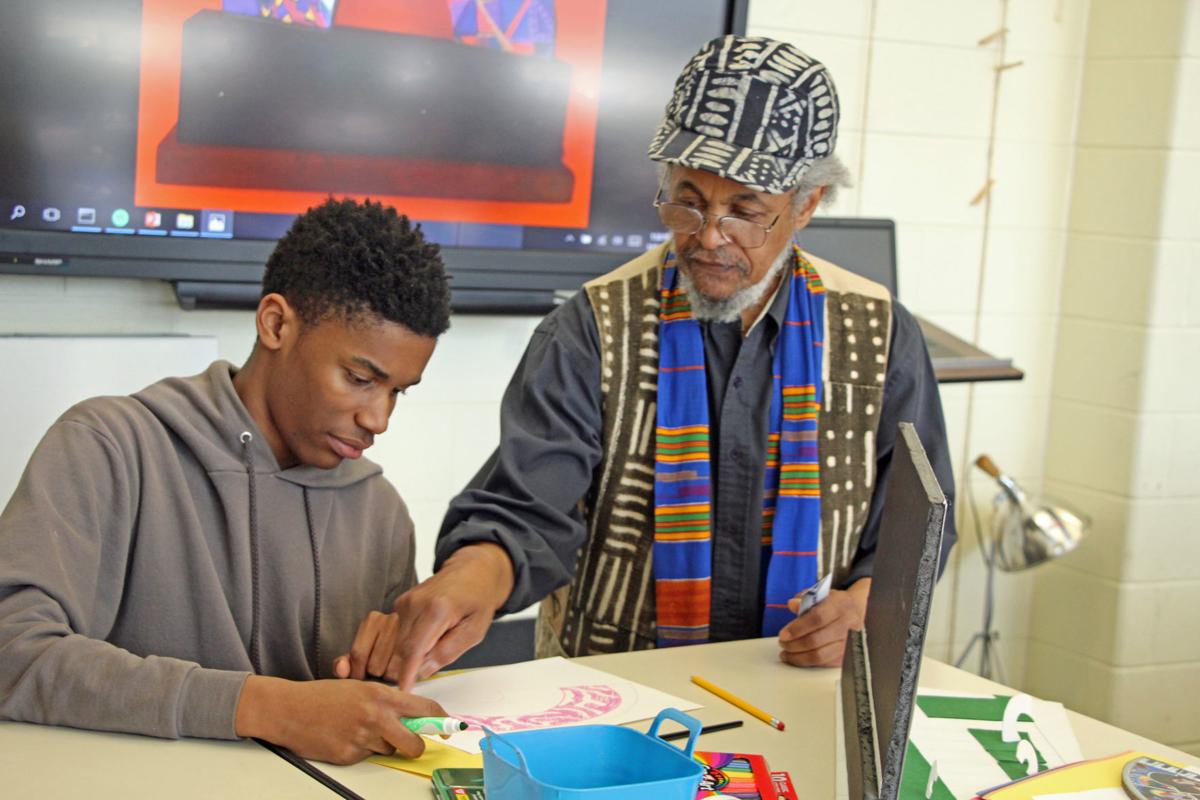 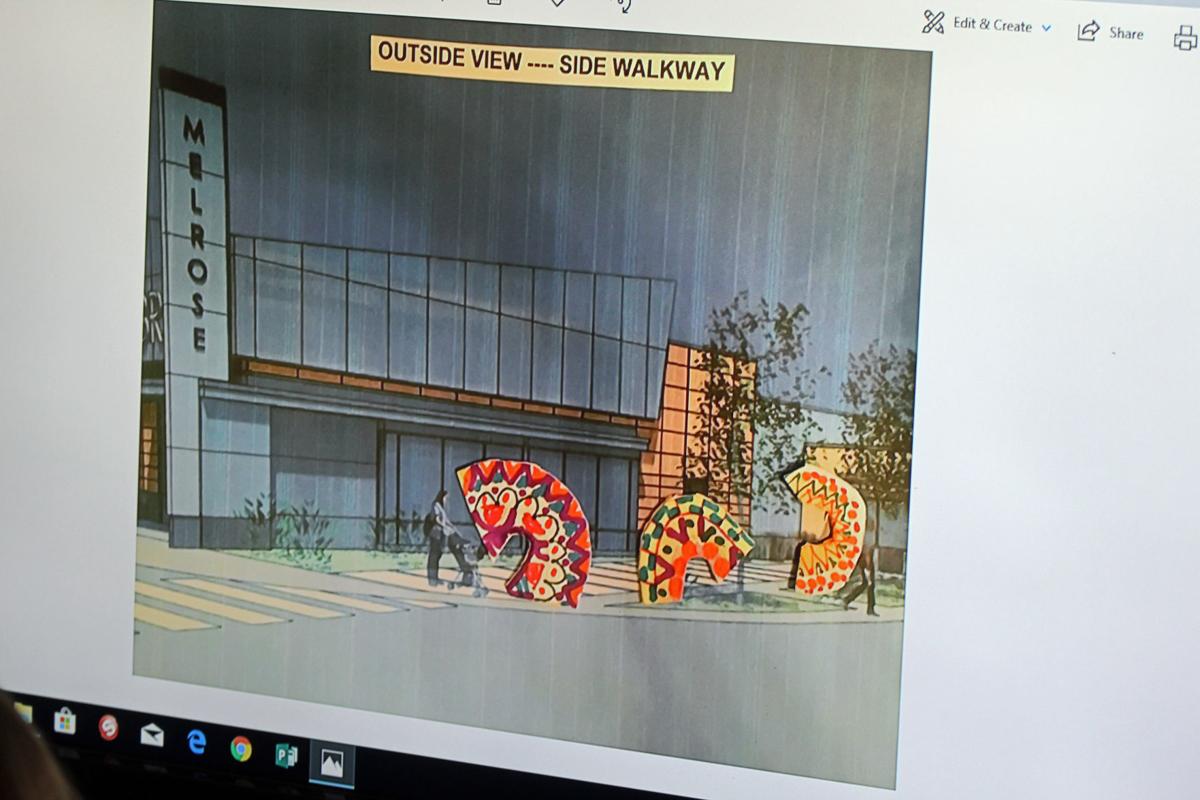 A mockup view of a part of Jones-Henderson’s proposed “Rhapsody between the Pages” sculptures as they might look in front of the refurbished library branch. The colors and patterns on the finished sculptures will be guided by the community feedback the artist receives. 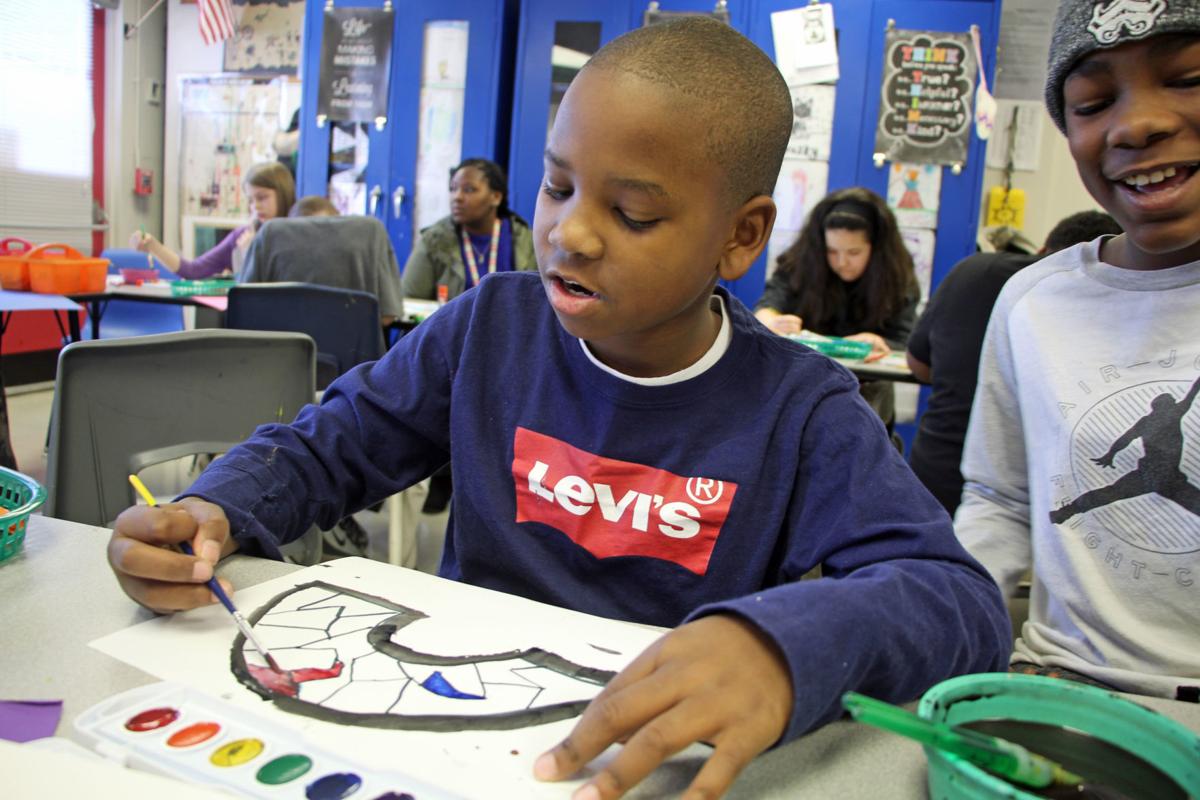 At least three curving sculptures painted with vibrant color will appear to dance in front of the Melrose Library in northwest Roanoke when it opens in its new location.

Titled “Rhapsody Between the Pages,” this forthcoming addition to Roanoke’s public art collection comes from the mind of Napoleon Jones-Henderson, a Chicago-born artist and teacher who has for decades been an influential figure in the Black Arts Movement. The artist runs the Research Institute of African and African Diaspora Arts in Roxbury, Massachusetts, a suburb of Boston.

Roanoke arts and culture coordinator Susan Jennings said Jones-Henderson was chosen out of 77 applicants to create the $40,000 project. “The biggest reason we chose Napoleon was because of his intent to involve the community. He really wanted it to be a community-driven design.”

“This commission is important to me for two major reasons,” Jones-Henderson said. “It allows me to have a work within the African American community and it also allows me to have a visual, artistic relationship with the architect who designed the building,” which he described as “an artwork in itself on the outside.” He views the placement of his art within the space designed by the architect as one form of collaboration.

In pursuit of another form of collaboration, Jones-Henderson traveled to Roanoke earlier this week. On Monday, he gave a presentation to residents and business owners from the Melrose-Orange section of the city about “Rhapsody,” and asked attendees to contact him with their ideas.

Tuesday, he conducted workshops at Hurt Park Elementary and William Fleming High schools. As he makes the enamel on metal sculptures, which could be 8 to 10 feet high, he’ll have the student drawings on hand for inspiration.

“Libraries tend to be a focal space, community space for an area, socially, educationally, and it opens up people to the rest of the world,” Jones-Henderson said. “Over my entire career, most of my works, even when they’re in places like convention centers, or other broader community spaces, I engage the active community in that area in the process of creating the concept that will be implemented in the actual artwork.”

The artist likes to make artwork in shapes that he describes as “curvilinear rectangles” — “If you straighten out the two curved sides, you’ve got a rectangle” — as opposed to the regular rectangles one thinks of when picturing paintings hanging on walls. This way the pieces are more dynamic, yet there is still plenty of surface room for images.

“My overarching concern is the harmony of the entire design,” he said. “It’s an improvisational process, always.”

Jones-Henderson, 75, had the Roanoke Valley on his radar long before he had a chance to create art here. A school friend in Chicago married a woman from Roanoke. He counts poet Nikki Giovanni, who teaches at Virginia Tech, as a longtime friend.

“We’ve all traveled the landscape of the Black Arts Movement,” he said. “Music, literature, theater, all the various disciplines of the arts are really an integral part of what I do in my visual work. I try to utilize color in the same way that poets use words to bring forward certain visual, spiritual and humanitarian sort of concerns.”

In 1968, Jones-Henderson joined a Chicago artists’ group known as AfriCOBRA (the acronym stood for African Commune of Bad Relevant Artists), and he’s still a member. His handwoven tapestries appeared in AfriCOBRA’s earliest exhibitions. “Any of the mediums that an artist uses, I have dabbled in in some way.”

He has work on display in “AfriCOBRA: Messages to the People,” an exhibition showing through April 7 at the Museum of Contemporary Art in North Miami. The National Museum of African American History and Culture also has a collection of AfriCOBRA art, he said.

Much of his art relates to music, including “Rhapsody Between the Pages.”

“Musicians always refer to music as having a color tone, and sounds have certain colors,” he said. “I know by my use and involvement with color that I hear these tonalities when I’m working.”

The Melrose Branch Library, scheduled to move from Salem Turnpike to Melrose Avenue in late spring, directly serves Northwest Roanoke’s majority black population, a fact that’s meaningful to Jones-Henderson. “Wherever I go, that community is my community.”

For more information, contact arts and culture coordinator Susan Jennings at 853-5652 or susan.jennings@roanokeva.gov.

A mockup view of a part of Jones-Henderson’s proposed “Rhapsody between the Pages” sculptures as they might look in front of the refurbished library branch. The colors and patterns on the finished sculptures will be guided by the community feedback the artist receives.