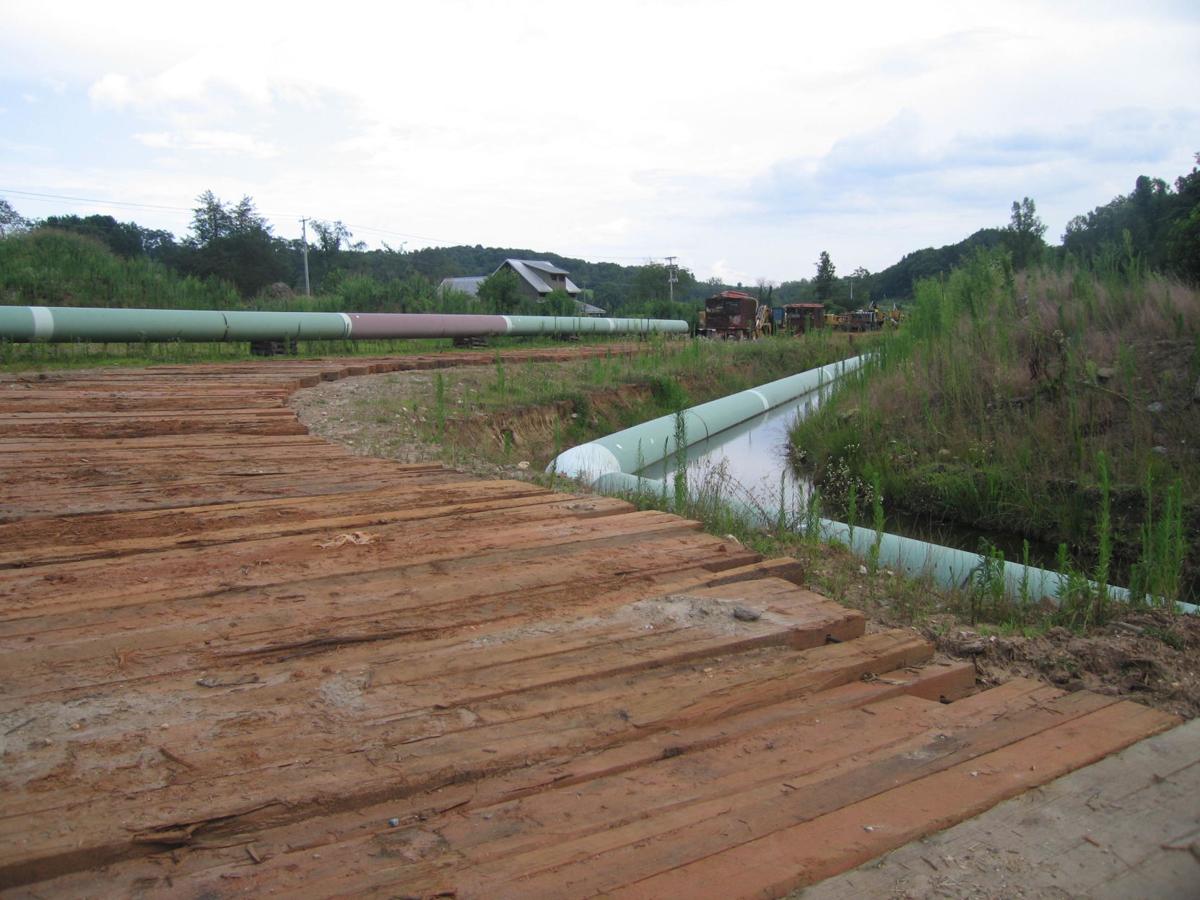 Mountain Valley Pipeline site on a property in Franklin County. 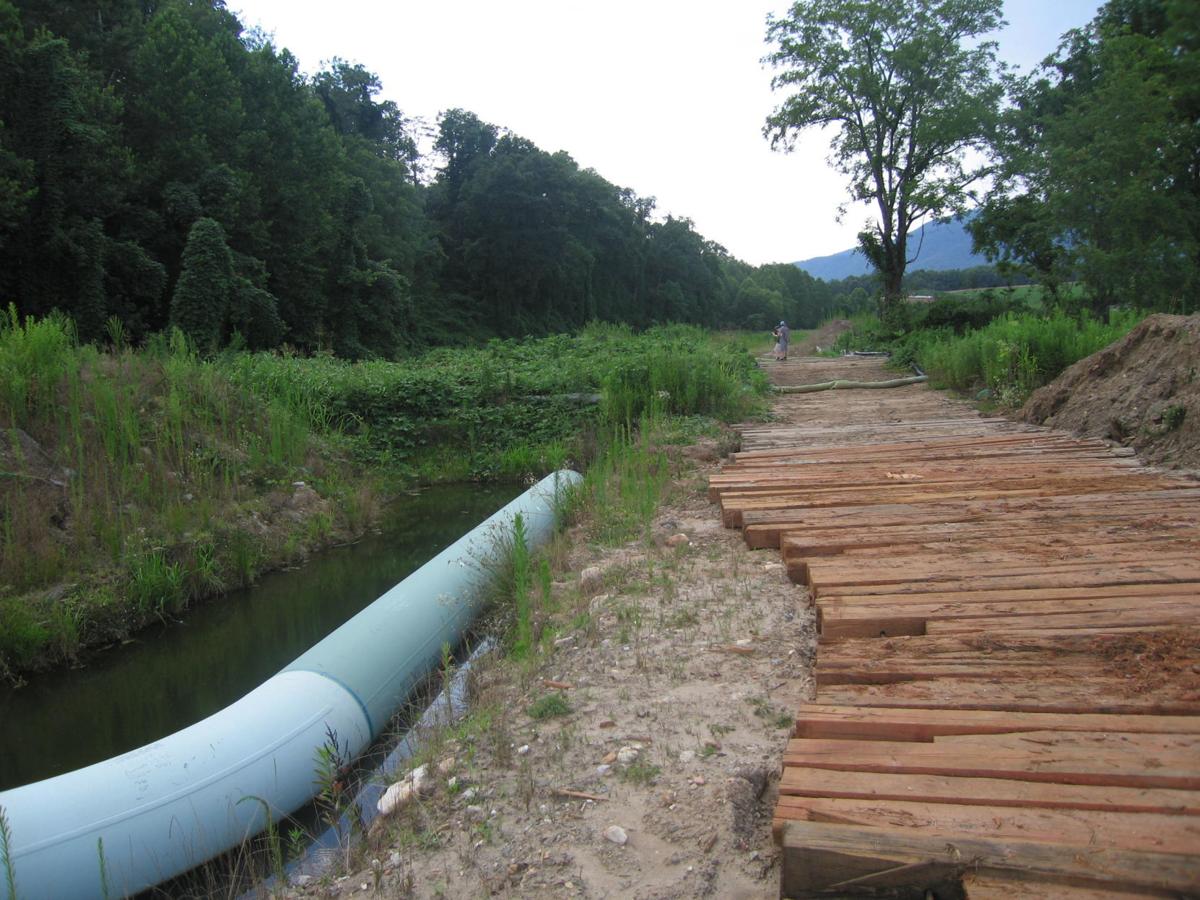 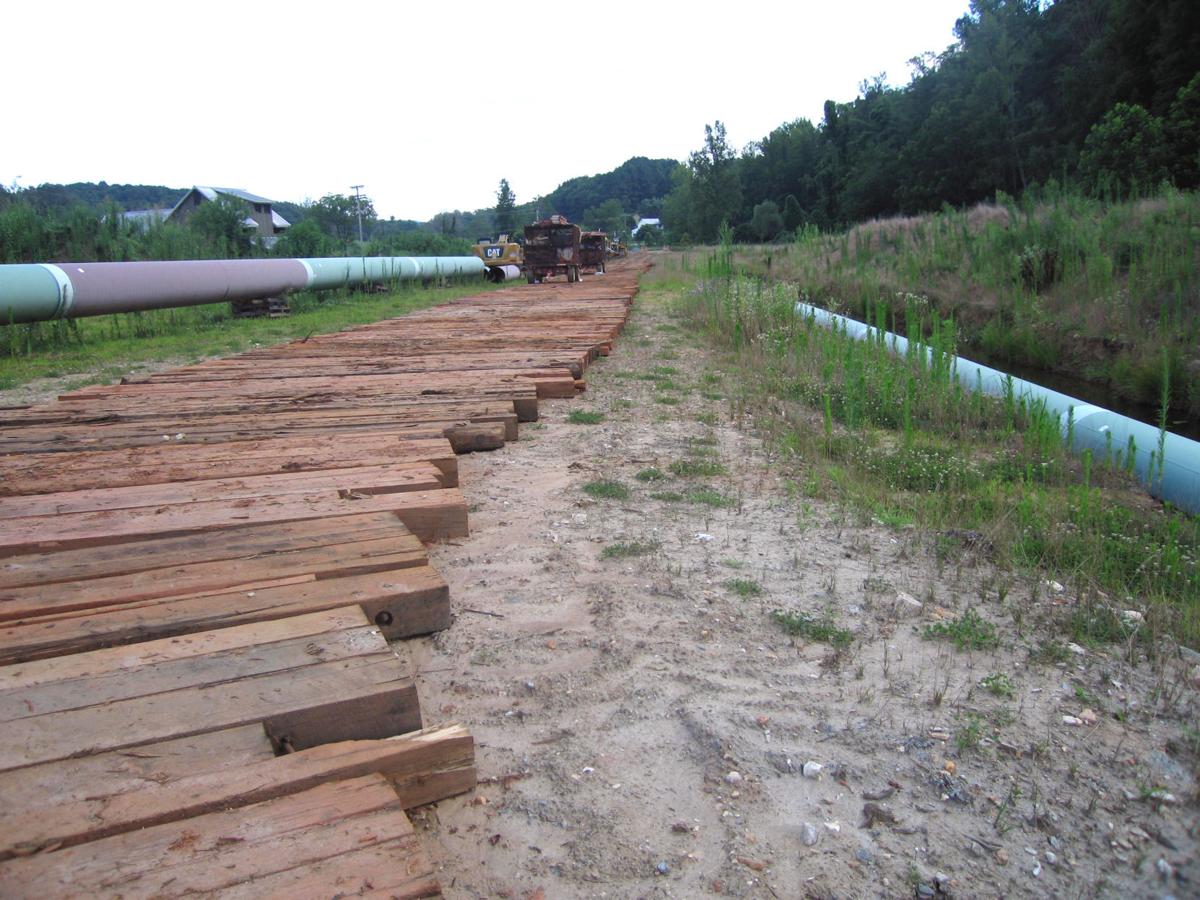 Large wooden mats, used as temporary roadways for construction equipment building the Mountain Valley Pipeline, have been swept down the Blackwater River by heavy rains in recent weeks.

At least two of the so-called timber mats made it into Smith Mountain Lake, where critics say they posed a public safety risk.

If a boat were to hit one of the sections of wood floating in the water, “that could be a major catastrophe,” said Mike Carter, a member of the Franklin County Board of Supervisors.

At least a dozen of the timber mats placed on construction sites in the county were washed downstream by floodwaters in late June, according to an environmental compliance monitoring report filed this week with the Federal Energy Regulatory Commission.

Two of the mats were found in the Blackwater channel, not far from the W.E. Skelton 4-H Educational Conference Center near Union Hall.

A contractor using a barge to remove floating debris for Appalachian Power Co. disposed of the mats, spokesman John Shepelwich said. It was the first time officials could recall seeing such materials in the lake.

The mats were “not extremely unusual or outsized” compared to some of the tree trunks and other debris the Smith Mountain Project routinely removes from the water to protect its two dams and the public, Shepelwich said.

But for pipeline critics — who in the past have raised concerns about sediment being washed from work sites into streams and rivers — the mats were a different kind of problem.

“We are concerned,” said Lorie Smith, president of the Smith Mountain Lake Association. “We’re watching as vigilantly as we can.”

Natalie Cox, a spokeswoman for Mountain Valley, said as much as five inches of rain swamped a temporary construction bridge that spanned the Blackwater. The bridge had been in place for more than a year, following the suspension of the company’s stream-crossing permit.

“Several mats, either 18 feet by 6 feet, or 40 feet by 6 feet, used to build the crossing over the waterbody were subsequently carried away by the current,” Cox wrote in an email.

“MVP’s contractor worked diligently to recover mats along the river, and MVP worked with a local company to retrieve a few that made it to Smith Mountain Lake,” the email stated. “The crossing at the Blackwater River will not be rebuilt until resolution of the Nationwide 12 Permit, which is expected late this summer.”

In addition to being used to cross streams, timber mats are also placed along the pipeline right of way to keep construction equipment from sinking into mud. They consist of wooden beams that are bolted together.

The displaced mats were listed in the FERC document as a “communication report,” which means the agency will oversee talks on how to resolve the problem.

Of more than 5,000 reports issued since last year, FERC has yet to find a serious violation that could lead to a more serious enforcement action.

While the Pittsburgh-based joint venture of energy companies building the $5 billion pipeline has been cited repeatedly for failing to control erosion and sedimentation, larger objects occasionally get caught in the runoff, too.

Last October, two 40-foot sections of the pipe that had been placed next to a trench dug for them along the project’s right of way were washed away by floodwaters. One of them floated about 1,000 feet before lodging into trees along the edge of the Blackwater.

The same storm swept several timber mats off the construction zone that runs through the nearby Four Corners Farm in Franklin County.

David Werner and other co-owners of the property refused to allow Mountain Valley officials on their land to retrieve the mats and move them back to the right of way, of which the company had obtained control through eminent domain.

Werner said he didn’t want Mountain Valley to inflict any more damage to his farm, which has largely ceased operations since construction began a year ago. A trial to determine how much the company must pay for the land is set for next year.

To Werner, a failure to keep sediment, sections of pipe and timber mats out of nearby water bodies indicates a larger problem with the project.

“It’s too steep,” he said of the mountainous route Mountain Valley is taking to build its 303-mile pipeline through West Virginia and six counties in Southwest Virginia. “Mother Nature has a way of reclaiming things, and that’s what she’s doing.”

Mountain Valley Pipeline site on a property in Franklin County.