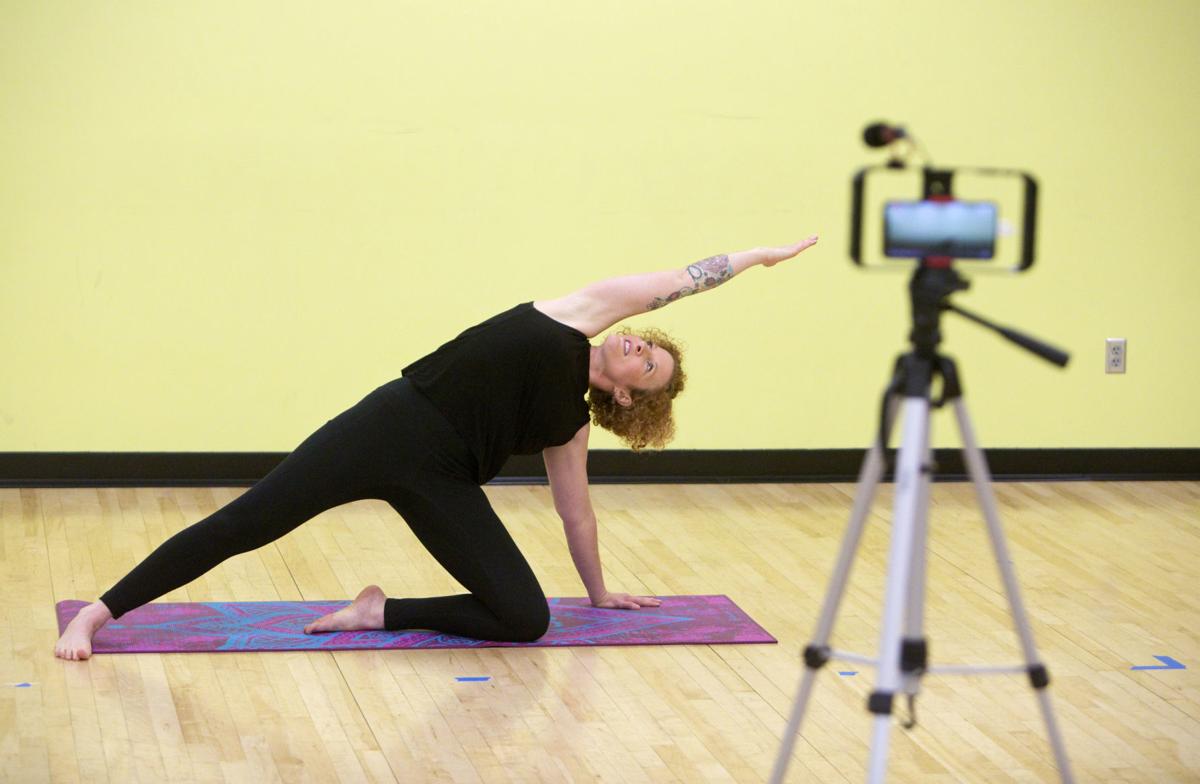 Sarah Early teaches a barre class and livestreams it at the Kirk Family YMCA in Roanoke. The local Y branches are offering free live and prerecorded classes online and on social media. Several instructors from the Y are putting their classes online. 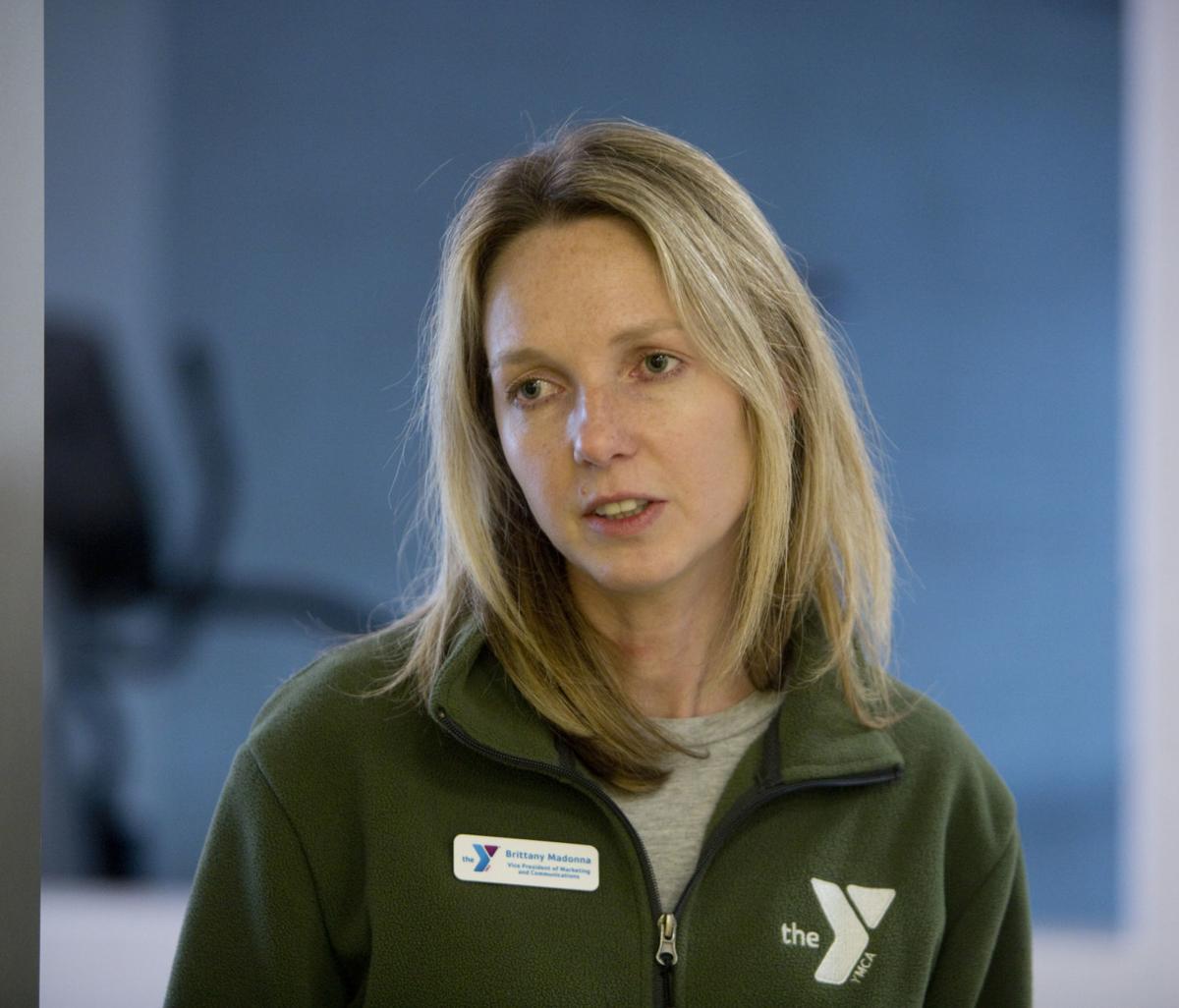 Brittany Madonna, vice president of marketing and communications for the YMCA of Virginia’s Blue Ridge.

Sarah Early stands on her mat before an empty studio at the Kirk Family YMCA and warmly welcomes the participants in her Tuesday morning barre class.

“Morning, y’all,” she says, directing her greeting toward a cellphone on a tripod.

The class is being taught virtually — in this case via Facebook Live. It’s a shift many gyms and fitness studios in the region are making after the COVID-19 pandemic forced them to close.

On this day, the YMCA is strangely quiet. There are no sneakers slapping the treadmills, no squeaking on the basketball court. No one stands at the front desk, chatting with patrons. All the lights are off, save for the one studio where Early’s class is being filmed.

Despite the empty room, Early has an energetic, breezy demeanor and makes conversation with the unseen participants.

“I am feeling my gardening that I did this weekend,” she tells them. “My legs are sore. It’s good, though — they feel alive.”

Early teaches the class without any equipment, since she’s not sure what everyone has available at home. But if participants need a little support during balance exercise, she recommends a wall or a chair.

Teaching to an empty studio was a little weird at first, Early said, since she usually plays off the participants’ energy. She will joke around with regulars, even calling out to them by name from her post at the front of what’s ordinarily a crowded studio.

“I’ve always really appreciated the participants and I try to let them know that,” Early said. “And now I have even deeper appreciation for them.”

Practically speaking, seeing the class allows Early to make adjustments based on what’s working or not. Virtually, she has to rely on her instincts.

Early has been a group fitness instructor at the YMCA for nearly seven years and in that time has built lasting relationships with many regular attendees of her classes. She’s been in touch with several of them while the gym has been closed.

Their messages consist of “I miss you, I miss the Y,” Early said. And she tells them the same.

“I do miss everybody.” Early said. “The Y is like family for me, it really is.”

Maintaining those connections with members is essential, said Mark Johnson, president and CEO of YMCA of Virginia’s Blue Ridge. The virtual fitness classes are key to doing so.

“It’s partly to keep people healthy, obviously, and to give them an avenue for that, but also it has a lot to do with us just continuing to connect in every way that we can,” he said.

It felt so strange to walk into the building on a recent dark and quiet morning that Johnson took a video to send to his wife. Entering without saying hello to someone never would have happened before.

Johnson said he knows many members depend on the YMCA for that interaction. Staffers have been getting on the phone and calling the members they used to see every day, especially seniors, just to check in.

“We’re just going to call people and check on them and tell them we miss them,” he said. “Those things are very meaningful, one person at a time.”

The YMCA of Virginia’s Blue Ridge closed its five branches, which serve about 23,000 people, on March 18. The organization was able to quickly provide members access to videos through a nationwide YMCA initiative but also wanted to offer its own virtual classes featuring the “familiar faces” of local instructors, many of whom have loyal followings, said Brittany Madonna, vice president of marketing and communications.

“We definitely felt it was important to have a local aspect,” she said.

The initial idea was for pre-recorded videos, but Facebook Live videos were also added to the mix. Videos posted to Facebook and YouTube are available to anyone for free.

The Y isn’t alone in its efforts to stay connected to members. Jason Woolard owns Fit Body Boot Camp franchises in Roanoke, Daleville and Forest. The California-based company has made pre-recorded videos available to all its members, but Woolard said local coaches are also doing live classes through Zoom.

“So we can actually see our members, interact with them and then coach them even while they’re working out at home,” Woolard said.

He estimated 60 to 70 people have been participating in these live classes daily. The workouts are also recorded so members can do them on their own time.

Though Woolard expects his members would prefer an in-person workout, he said the virtual fitness options are “a good tool for us to use to bridge that gap.”

The virtual classes are all body-weight only, which Woolard said required some creativity, as Fit Body Boot Camp typically uses a lot of equipment. But he wanted to make them accessible to everyone at home.

“Our goal is just to keep people moving,” he said, noting that people are cooped up and likely in need of some activity.

Fit Body Boot Camp also launched a 28-day at-home workout challenge, which is available for nonmembers to purchase. Woolard said he hopes some people might take advantage of the program and give the gym a try when it reopens.

When Jill Loftis closed Uttara Yoga Studio in Roanoke, she quickly decided to host virtual classes. Loftis was especially focused on providing digital options for her unlimited members in the hopes they would “stick with” her through the pandemic.

“The other flip side is that I’m 53 years old and technology’s not my jam,” Loftis said, noting the learning curve that comes with shifting to online classes, which the studio has offered via pre-recorded videos and also live through Zoom and various social media platforms.

“It’s important that we provide free content, too, because a lot of us are losing our jobs and I don’t want anyone to do without just because they can’t afford it,” Loftis said.

Uttara has also created programming for kids, which parents can do with their children or set them up to do on their own.

“It’s hard enough to be a parent, but now the parent has to try to work and be the disciplinarian and the gym teacher and the science teacher and everything else,” she said.

Loftis said she’s trying to balance caring for others with tending to her business. Even though the studio is closed, she still has expenses and rent to pay.

Students have sent many encouraging emails, Loftis said, some that even brought her to tears. They miss the community and their practice. But, the yoga instructor said, the skills they’ve learned in yoga — how to calm themselves and stay healthy — will serve them well during this uncertain time.

Loftis encouraged everyone to be mindful of their health. Staying well, she said, is easier than getting well.

To access virtual programming from YMCA of Virginia's Blue Ridge, visit http://ymcavbr.org/main/y-at-home/ or the individual branch Facebook page, such as the Kirk Family YMCA at https://www.facebook.com/pg/kirkfamilyymca/posts/?ref=page_internal and Salem Family YMCA at https://www.facebook.com/pg/salemfamilyymca/posts/?ref=page_internal

Here are three of the fitness studios offering virtual classes in the Roanoke area:

Sarah Early teaches a barre class and livestreams it at the Kirk Family YMCA in Roanoke. The local Y branches are offering free live and prerecorded classes online and on social media. Several instructors from the Y are putting their classes online.

Brittany Madonna, vice president of marketing and communications for the YMCA of Virginia’s Blue Ridge.