Scientists at the Fralin Biomedical Research Institute at VTC have developed a novel way to isolate exosomes from cow’s milk. The research team visited Donnie Montgomery of Homestead Creamery, which has provided the scientists with unpasteurized milk samples for experimentation. The researchers’ purification protocol was published last month in Nanotheranostics. From left: Jane Jourdan, Kevin Pridham, Montgomery, Rob Gourdie and Spencer Marsh. 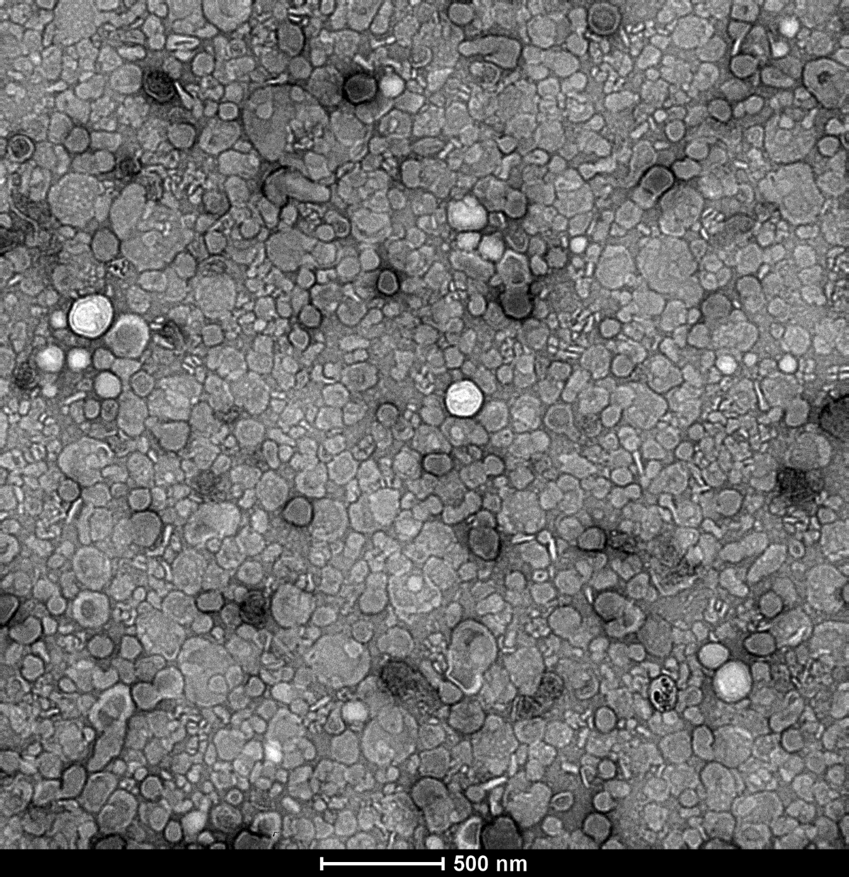 When a team at the Fralin Biomedical Research Institute at VTC was looking for a solution to a drug delivery problem, they found it on a dairy farm.

Rob Gourdie, a professor and director of the center for vascular and heart research, and his team are extracting exosomes from Homestead Creamery milk to serve as couriers for medicine.

Gourdie learned that peptide therapeutics, which had been successfully used as a topical treatment to aid wound healing, could also work well against internal injuries, including those to the heart. But there was one major challenge.

“You can’t give them orally, because once they hit the stomach acids, they’re history,” he said. “So that means they’re very difficult to administer and they’re very unstable in the body.”

It seemed that exosomes — tiny, extracellular vesicles produced by cells in the body — could offer a potential workaround. Gourdie described exosomes as carriers of information sent out “like little text messages.”

“Basically, it’s a way for cells to have conversations with other cells in distant parts of the body,” he said.

Gourdie was interested in “hijacking” the exosomes and loading them with the peptides so they could be used to treat internal injuries.

“If we can package our peptides inside the exosomes, it provides a way of protecting them when they’re in the body and then they get to their target and they have the desired effect,” he said.

Initially, Gourdie and his team worked with cultured cells, but that’s a difficult and expensive process, which would make it very hard to scale up to pharmaceutical-level production. That went against Gourdie’s philosophy that promising results from the lab should be taken out into the world where they can have a real impact on people’s lives.

The idea to use milk came from Gourdie’s lab manager, Jane Jourdan, who mentioned a paper she’d read on exosomes in milk.

“I said to myself, ‘That’s it. That’s where we should be looking,’” Gourdie recalled. “It’s produced in vast amounts by the dairy industry, it’s tolerated well by most humans.”

And the team would learn when developing its isolation protocol — the method of extracting purified exosomes from unpasteurized milk — that exosomes are plentiful in cow’s milk.

But before that discovery could be made, they needed access to unpasteurized milk. Jourdan suggested contacting Homestead Creamery in Franklin County, which agreed to provide it.

It’s a bit of a full circle moment for Gourdie, who worked on a dairy farm as a teenager.

“The sound of a milking machine is enough to make my heart sink still to this day because I know it must be 5 o’clock and it’s time to get up,” he said. “So I was kind of familiar with the dairy industry a little bit, at least from the perspective of where I grew up in New Zealand.”

When Donnie Montgomery, co-founder and co-owner of Homestead Creamery, got the call requesting some milk, he decided to supply it to the scientists, though he didn’t quite grasp the extent of their research at the time.

Montgomery hadn’t given much thought to the role that the milk his company produces might have in biomedical research.

“When they told me what the possibilities were, I thought it was pretty neat, a pretty cool idea,” he said.

The team has since been out to visit some of the farms that supply Homestead Creamery’s milk — Montgomery said Gourdie even had his photo taken in the milking parlor.

During the pandemic, members of Gourdie’s lab, who include Kevin Pridham and Spencer Marsh, along with Jourdan, developed the isolation protocol. Gourdie said they found that purified exosomes make up about 10% to 15% of milk by volume. That such vast amounts of exosomes can be harvested from milk is good for research, as it allows for many experiments to be conducted.

It also means the lab doesn’t go through gallons and gallons of milk.

The team’s research on the isolation protocol used to harvest exosomes from cow’s milk was recently published in the journal Nanotheranostics.

Gourdie said the next step is figuring out how to load the peptide drugs into the exosomes, work that is underway with help from a chemical engineer at the University of Virginia, Rachel Letteri.

The beauty of this method is that the drugs can be delivered orally, Gourdie said, which helps with ease of use and patient compliance, as few people enjoy being jabbed with needles. He expects it will be delivered in a liquid form.

“Basically, [if] you have a heart attack, you might be handed a milkshake in the future to take to sort of protect your heart,” Gourdie said.

While the peptide could help with heart injuries, he said there are also indications it could be used to combat the side effects of radiation therapy on internal organs and help to recover drug sensitivity to cancers, in which patients develop a resistance to a drug.

As part of his effort to bring this research out into the real world, Gourdie formed the Tiny Cargo Co. with a member of his lab, Spencer Marsh. He said starting a company helps to build protection around the intellectual property, licensed through Virginia Tech, and attract grant funding and investment, which is necessary for eventual clinical development.

“The company acts as a vehicle to move things out of the bench, into the world and get the kind of resources it needs to get in order to move things forward,” Gourdie said.

“Basically, it’s a way for cells to have conversations with other cells in distant parts of the body.”

-- Rob Gourdie, a professor and director of the center for vascular and heart research

State and local officials gathered Tuesday for the grand opening of the newest building at the Fralin Biomedical Research Institute in Roanoke.

Scientists at the Fralin Biomedical Research Institute at VTC have developed a novel way to isolate exosomes from cow’s milk. The research team visited Donnie Montgomery of Homestead Creamery, which has provided the scientists with unpasteurized milk samples for experimentation. The researchers’ purification protocol was published last month in Nanotheranostics. From left: Jane Jourdan, Kevin Pridham, Montgomery, Rob Gourdie and Spencer Marsh.