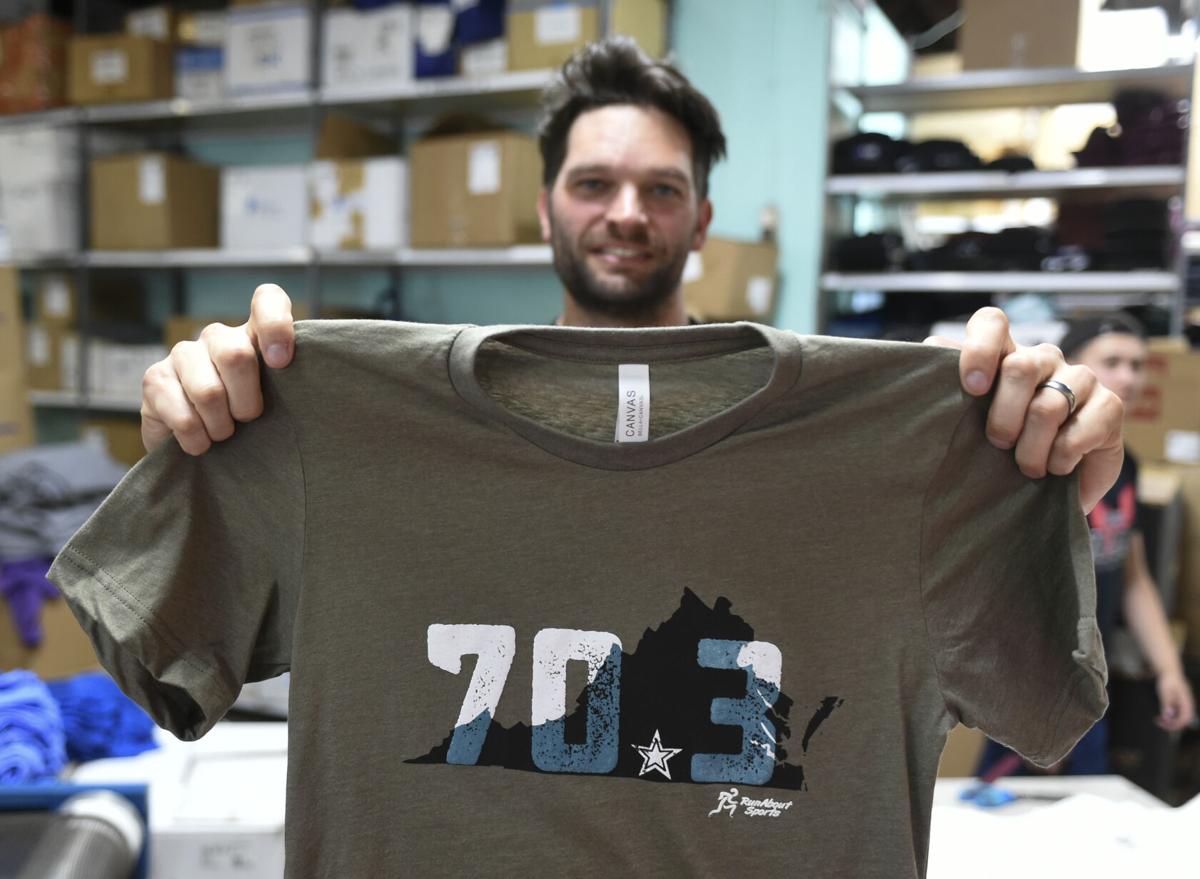 Greg Szechenyi, owner of Press Press Merch in Roanoke, holds up one of the T-shirts his company produced in collaboration with RunAbout Sports Roanoke for this weekend’s Carilion Clinic Ironman 70.3 Virginia’s Blue Ridge triathlon. 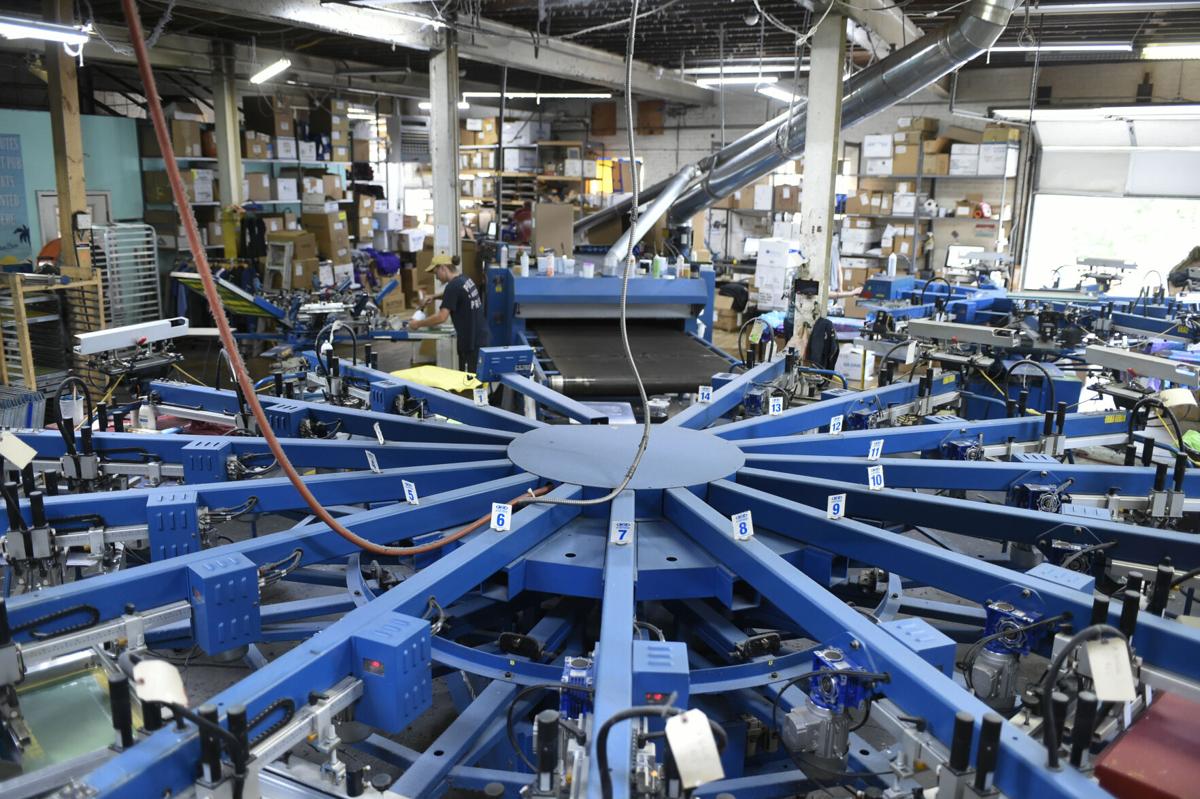 A 14-station screen printing press can produce more than 4,000 shirts a day at Press Press Merch in Roanoke. On Wednesday, it was used to create T-shirts to be sold by RunAbout Sports Roanoke to commemorate the Ironman triathlon. 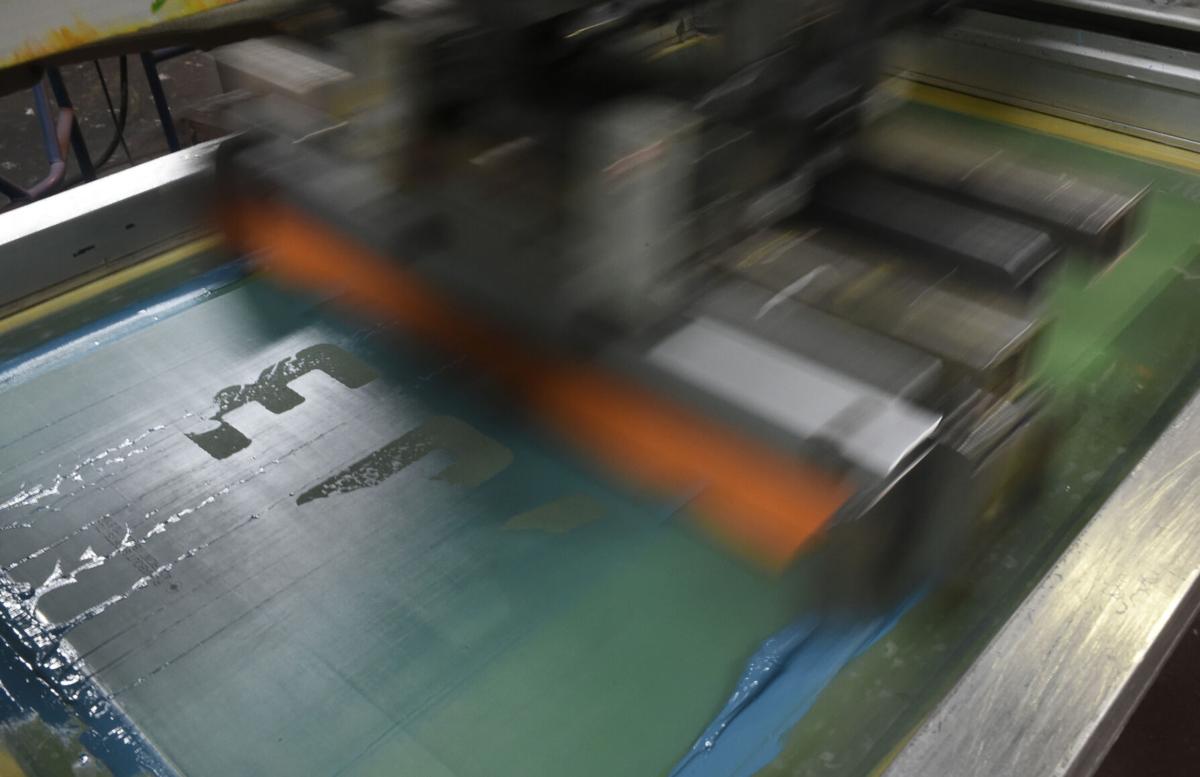 An automated squeegee applies blue ink to one of the T-shirts being produced for this weekend’s Ironman triathlon. 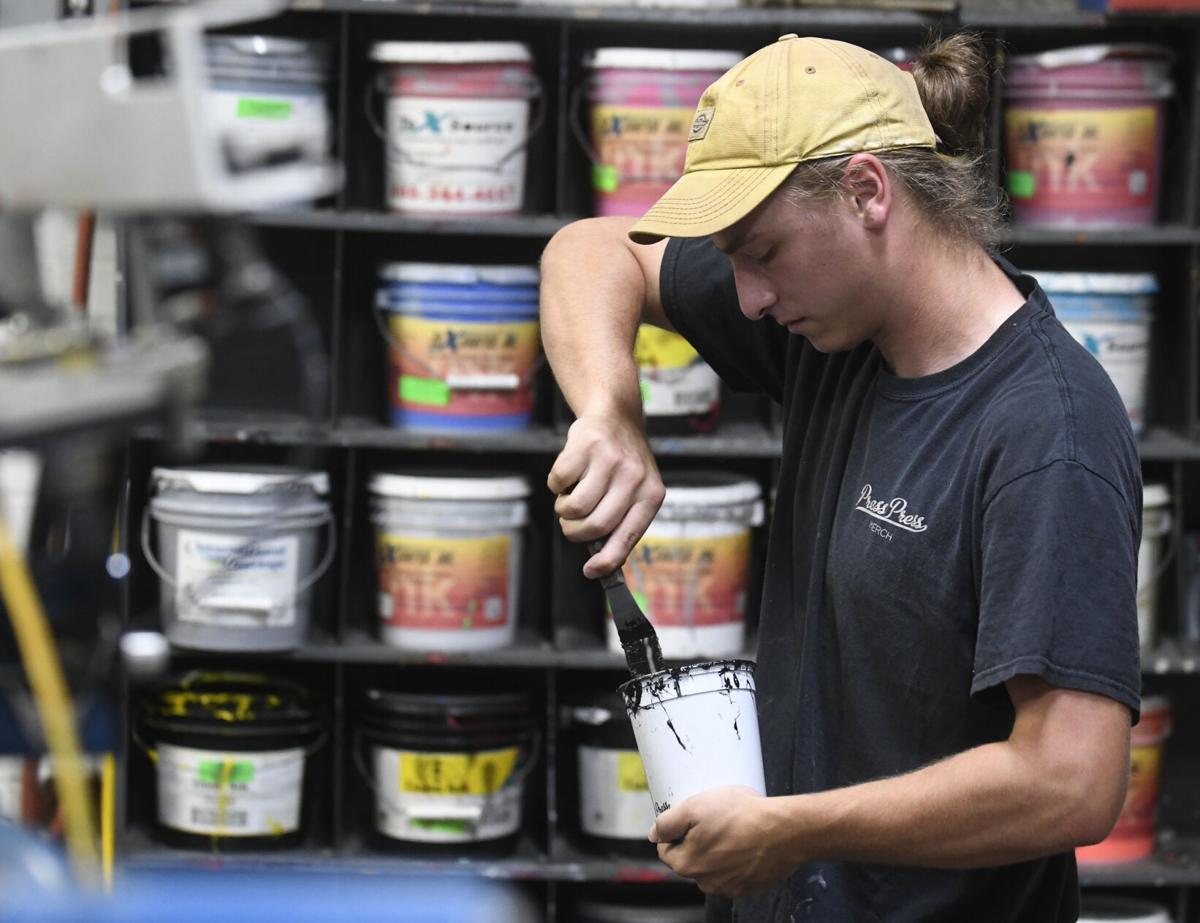 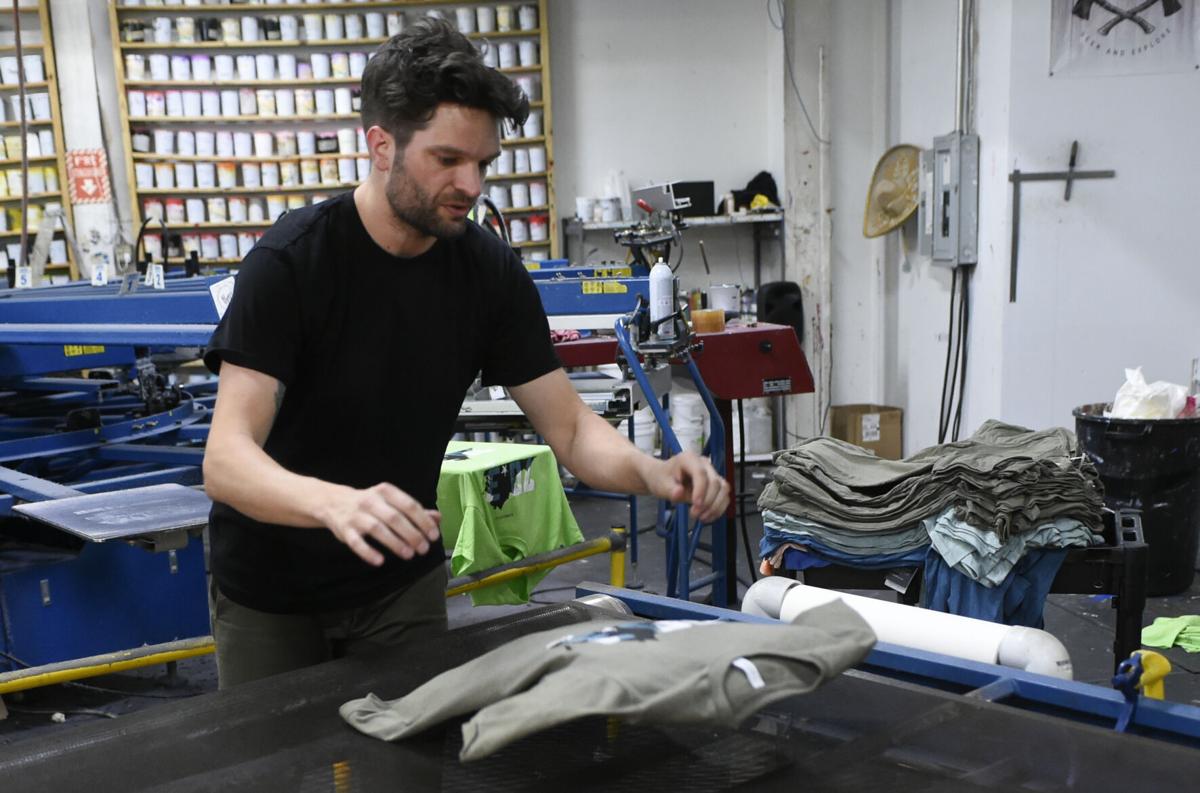 Greg Szechenyi places a printed T-shirt on a drier. 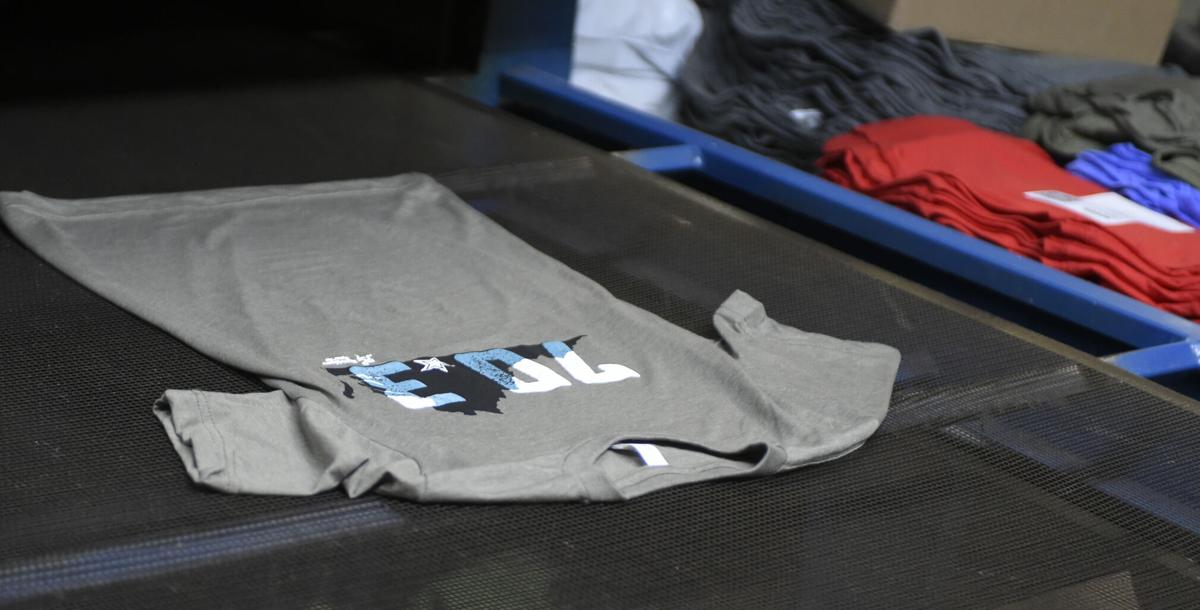 A T-shirt featuring a design that incorporates the state of Virginia and the 70.3-mile distance of this weekend's Ironman triathlon, emerges from a drying tunnel. 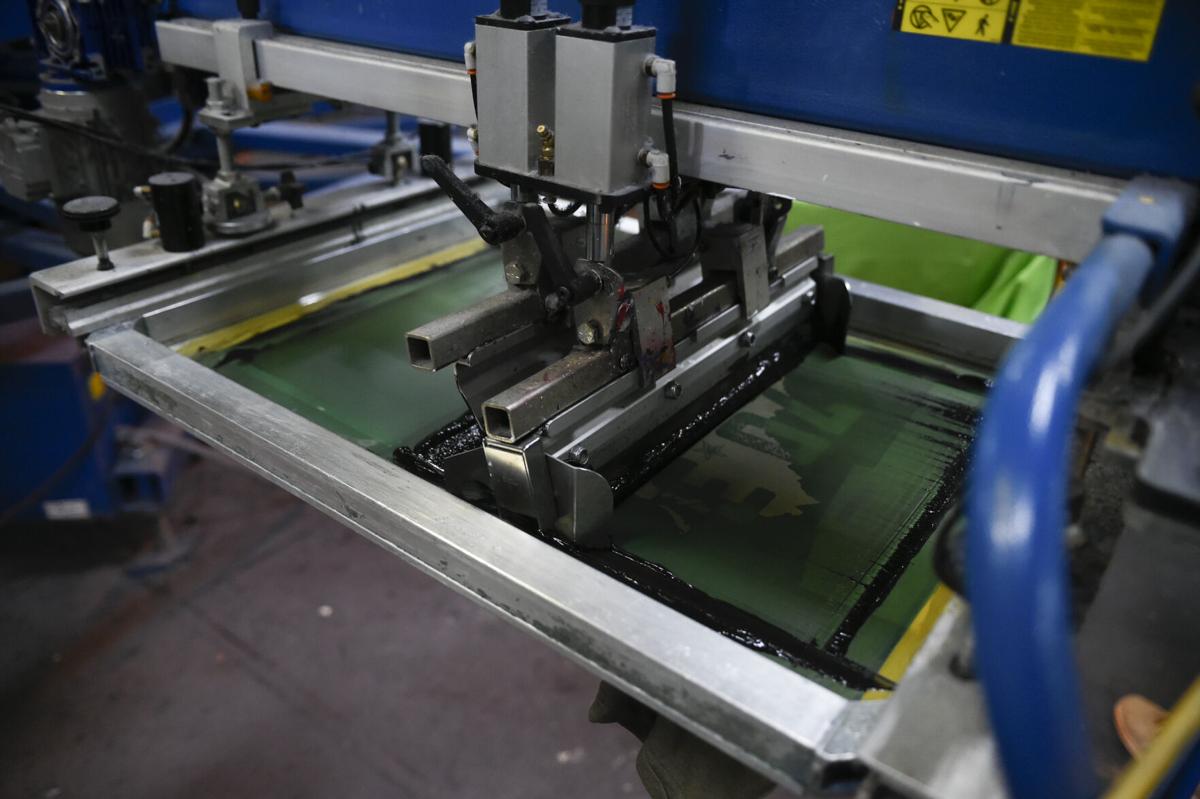 An automated screen printer applies one of three colors to a T-shirt at Press Press Merch in Roanoke. 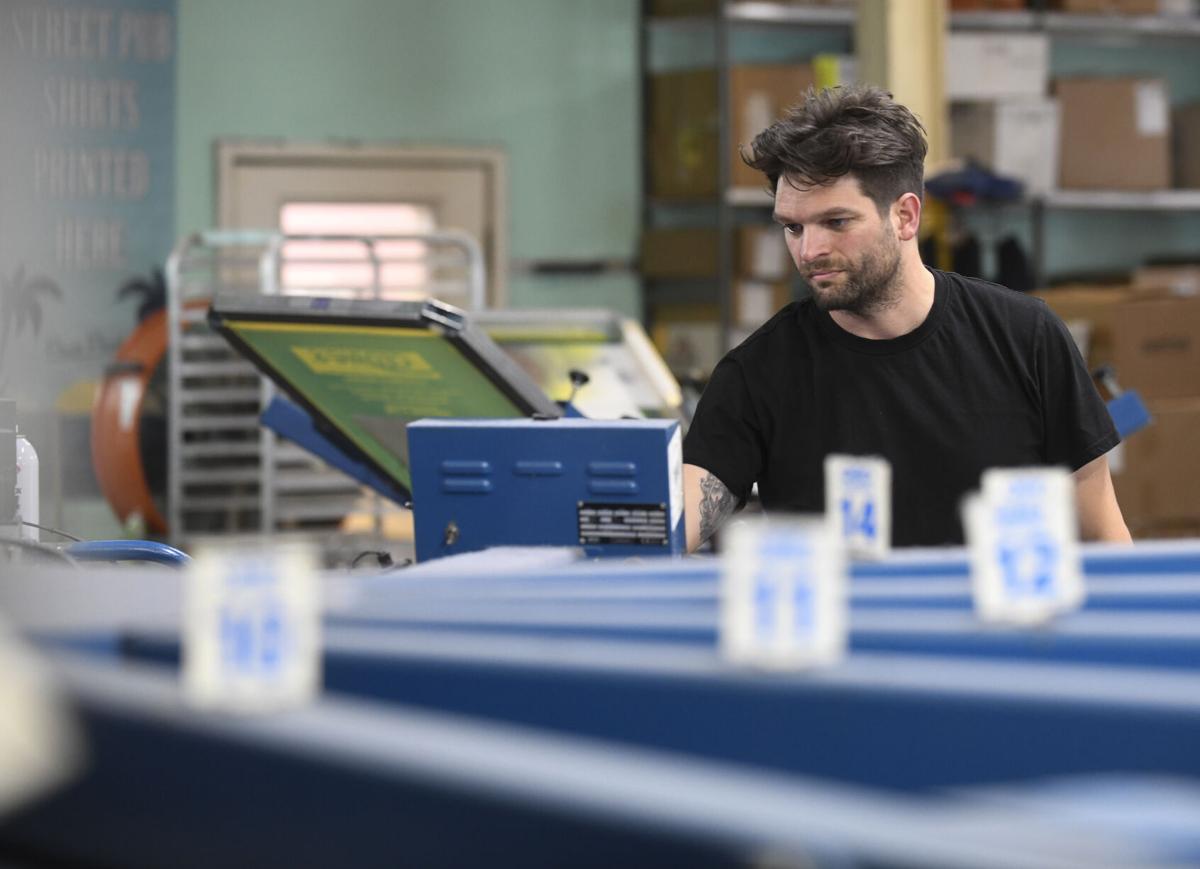 Greg Szechenyi sets up a screen printing press to produce T-shirts for this weekend’s Ironman triathlon.

As Ironman athletes and spectators descend on the Roanoke Valley for the long-awaited triathlon this weekend, the hospitality industry is eager to greet them.

Landon Howard, president of regional tourism group Visit Virginia’s Blue Ridge, likened the event to a “coming-out party,” as in “coming out from underneath the depths of this pandemic.”

In 2019 it was announced to much fanfare that Ironman had named Roanoke a host city, inking a three-year agreement with the first race set to occur in 2020. The race was expected to attract 2,500 athletes, each with an average 2.5 additional visitors in tow. The total annual economic impact of the race was estimated at $9.2 million.

But the COVID-19 pandemic forced the event to be delayed until 2021.

As recently as two or three months ago, there was still uncertainty about whether the triathlon would be held in Roanoke this year, said Catherine Fox, vice president of public affairs and destination development for VBR.

But as restrictions lifted and vaccination rates rose, organizers charged ahead with their plans. And on Sunday, athletes will swim in Carvins Cove, bike along the Blue Ridge Parkway and run on the Roanoke River Greenway as part of the Carilion Clinic Ironman 70.3 Virginia’s Blue Ridge triathlon.

The recent lifting of the mask mandate and all other pandemic restrictions in Virginia are expected to benefit the event. Howard said he believes more athletes will bring family and friends along with them as a result, and Fox said more of the community may be inclined to come out to the Ironman village to take in the event.

Howard acknowledged that the pandemic had dealt a “blow” to the tourism industry and that it is still in recovery mode. But he expressed hope that Ironman, which he called the first major event of the summer season, would help give the sector a boost and continue raising the region’s profile.

“I think it’s going to get everybody excited about a full recovery and a relaunch of our industry going into the remainder of 2021,” Howard said.

Coming off such a difficult year, it’s even more important that the event be a success. Fox said it’s essential to bring visitors to the region’s hotels and other businesses that benefit from tourism, and sporting events like the Ironman race are one of the main ways to do so.

Fox said the regional tourism agency worked with hotels to set aside blocks of rooms for Ironman and get that information out to the athletes. Hotel staffs have been briefed on the timing and location of race-related events, she said, and also were given a heads-up about how to help with bikes and what kind of food the athletes might like. Welcome posters have also been distributed.

Local businesses were encouraged to participate in the I’M Local program, through which they can entice athletes and their families to visit by offering incentives or discounts. More than 40 businesses throughout the valley are advertising their offers on the VBR website.

While hotels are the obvious beneficiaries of an event like Ironman, Fox said she expects restaurants will also fare well — racers need to carbo-load, after all — as will attractions like the Taubman Museum of Art, the Roanoke Pinball Museum and the Virginia Museum of Transportation that families of athletes might visit.

SpringHill Suites is situated in a prime location for Ironman, just across the street from the center of activity at River’s Edge.

General manager Neil Ordway said the hotel is sold out Thursday, Friday and Saturday and bookings are also strong on Sunday, since the race takes place that day and many people will probably wait another night to hit the road.

“We are ground zero right here,” he said.

Though the hotel managed to do well throughout the pandemic, Ordway said it still hasn’t returned to its prior staffing levels. But for Ironman weekend, the hotel will finally reopen its bar and restaurant.

SpringHill Suites is taking several other steps to cater to guests competing in the triathlon, he said, such as setting up a bike wash area and offering protein-packed grab-and-go breakfast options.

Ordway said he felt that the Blue Ridge Marathon, which was held in April and also sold out the hotel, set the stage for Ironman, demonstrating that such an event could be held safely.

Starr Hill, the official beer sponsor for the event, has upped its production leading up to race weekend.

“That’s the worst thing that could happen to us — running out of beer,” said Alex Conner, general manager of the Starr Hill Pilot Brewery & Side Stage in Roanoke.

But athletes and spectators looking for a refreshing beer, either at the brewery’s tasting room or at the Ironman village, need not worry. Conner said Starr Hill is prepared. She expects to go through about 25 kegs and at least 100 cases of beer in conjunction with Ironman, though Conner said that was a conservative estimate.

While swimming in Carvins Cove and biking along the Blue Ridge Parkway are highly anticipated aspects of the race course, Conner said those areas aren’t very accessible to spectators. But they can gather at River’s Edge, she said, watching the livestream while they relax with a beer.

Additionally, since the Starr Hill tasting room is so close to the action, Conner said it will have extended hours, expand its footprint by serving outside in its “can garden” and also offer live music.

“Being the first year and given the complexity around the timing with COVID restrictions just now starting to lift, it’s difficult to expect just how big it’s going to be,” Conner said.

But her hopes are high. Starr Hill opened its Roanoke location in 2017, and Conner expects this will be bigger than any event the brewery has seen, including the Blue Ridge Marathon, which she said typically brings a large crowd.

A financial boost to the business would be especially welcome on the heels of the pandemic, Conner said.

Becoming a sponsor for the event required a large investment, though Conner declined to say exactly how much. It was a calculated risk for the brewery, one she hopes will pay off.

Ally Bowersock, co-owner of RunAbout Sports Roanoke, signed her business up as a vendor at the Ironman village and herself up to participate in the race.

Bowersock said she’s excited not only to compete in an event of this scale in her own backyard — something she’d normally have to travel hours for — but also for the exposure that Ironman will bring to the region and small businesses like her own.

“If we can capitalize on a fraction of the market that Ironman offers, then we’ll be thrilled,” she said.

RunAbout Sports collaborated with Press Press Merch to create a design that incorporates both Virginia and 70.3 — the length of the race, which includes a 1.2-mile swim, 56-mile bike ride and 13.1-mile run. It will be featured on items like T-shirts, mugs and stickers.

Most athletes probably already have the shoes and other essentials they’ll need for the race, Bowersock said. Instead, as a vendor she chose to focus on unique, local items that commemorate the event.

It was a race to the finish to get the merchandise ready for the weekend, with items being produced on Wednesday. Bowersock said RunAbout is not only a vendor but also will have an aid station on the running portion of the course and needs to staff its store, all of which requires a lot of manpower.

“From a personnel standpoint, it has been a little harried trying to cover all our bases, but it’s a good problem to have,” she said.

This time last year, Bowersock said, everyone felt so dejected that virtually every race had been canceled. People train for months for such events. She’s thrilled that Roanoke’s Ironman weekend is finally within reach.

“Hopefully things go as well as we think they will and Ironman will be back for another two years-plus, and people will be excited to come back to Roanoke not just to race, but to travel for fun and for fitness because it’s such a great outdoor recreational area,” Bowersock said.

More information for athletes and spectators can also be found at www.ironman.com/im703-virginia-blue-ridge

Numerous roads will be closed Sunday to make way for Ironman triathletes swimming, running and biking across the Roanoke Valley.

Ironman triathlon and USA Softball game scratched because of pandemic

The U.S. Olympic softball team will not be coming to Salem in June.

The route for Roanoke’s Ironman 70.3 triathlon will include a stretch of more than 20 miles on the Blue Ridge Parkway.

Greg Szechenyi, owner of Press Press Merch in Roanoke, holds up one of the T-shirts his company produced in collaboration with RunAbout Sports Roanoke for this weekend’s Carilion Clinic Ironman 70.3 Virginia’s Blue Ridge triathlon.

A 14-station screen printing press can produce more than 4,000 shirts a day at Press Press Merch in Roanoke. On Wednesday, it was used to create T-shirts to be sold by RunAbout Sports Roanoke to commemorate the Ironman triathlon.

An automated squeegee applies blue ink to one of the T-shirts being produced for this weekend’s Ironman triathlon.

Greg Szechenyi places a printed T-shirt on a drier.

A T-shirt featuring a design that incorporates the state of Virginia and the 70.3-mile distance of this weekend's Ironman triathlon, emerges from a drying tunnel.

An automated screen printer applies one of three colors to a T-shirt at Press Press Merch in Roanoke.

Greg Szechenyi sets up a screen printing press to produce T-shirts for this weekend’s Ironman triathlon.