Latest wind farm plan is for 15 turbines, at 624 feet tall, in Botetourt County
1 comment
Share this
{{featured_button_text}}
1 of 2

This computer simulation from Apex Clean Energy shows what the Rocky Forge Wind Farm would look like from a residence 1.1 miles away. Revisions to the plan show 15 turbines standing 624 feet tall -- fewer, taller turbines than initially planned. 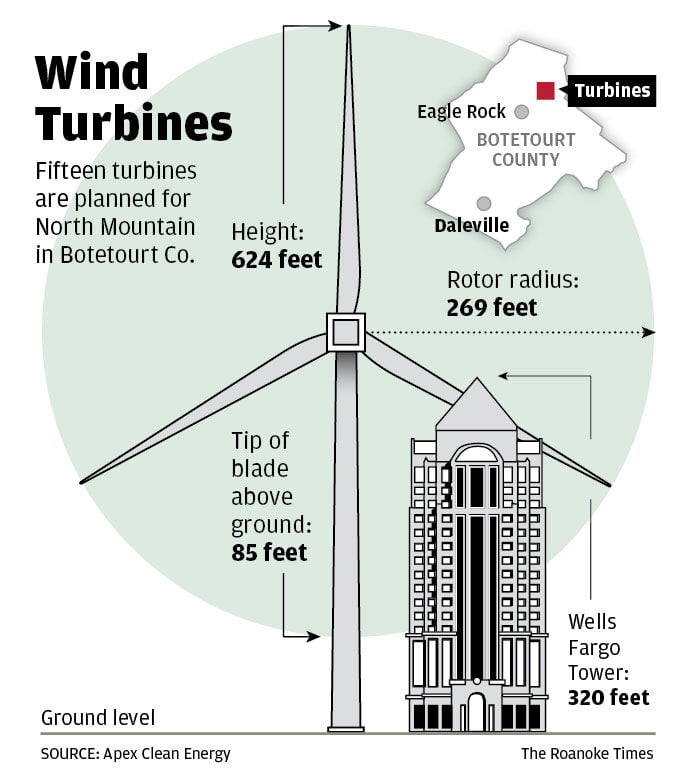 The plans by Apex Clean Energy provide the most detailed public description to date of Rocky Forge Wind, a renewable energy project that took years to get off the ground after being proposed in 2015.

Earlier approvals by the Botetourt County Board of Supervisors and the Virginia Department of Environmental Quality had set a maximum of 22 turbines at a height of up to 680 feet — about as tall as a 50-story skyscraper.

Final capacity levels could further reduce the number of turbines included in the site plan submitted late last week to the county’s planning department, according to Apex spokeswoman Natasha Montague.

“Until site plans are approved, building permits are issued, and final turbine models are selected, there could be a slight shift in the height and number of turbines,” Montague wrote in an email.

“In any case, we currently are proposing significantly fewer turbines than the original project thanks to the increased efficiency and capacity of the newest turbine technology,” she wrote.

In 2015, when Apex proposed a wind farm along a secluded ridgeline of North Mountain, it intended to build up to 25 turbines at a maximum height of 550 feet. But construction never began as Apex searched for a customer for its green energy.

By the time a deal was struck last year with Dominion Energy and the state of Virginia — which has a goal of using renewable sources for at least 30% of the electricity consumed by state agencies by 2022 — technology had advanced to allow fewer, but taller, turbines.

Permits were amended earlier this year to allow turbines up to 680 feet tall.

During the approval process, Apex was not able to say exactly how many turbines it planned to build, and at what height, because it had not selected a turbine model that would determine those dimensions.

Dan Crawford, chair of the Roanoke chapter of the Sierra Club, was encouraged by the wind farm’s latest step forward, and said he hopes the project’s completion will lead to other similar projects in Virginia.

The “vocal, persistent” opposition that Rocky Forge generated may ease as the general public becomes more familiar with wind energy, Crawford said. “It’s the unfamiliar that puts people off the most,” he said.

Public opinion polls have shown growing support for renewable energy, amid rising concerns about fuels such as coal and natural gas that contribute to climate change.

“The tide is turning, and none too soon,” Crawford said.

Apex has tentative plans to build another wind farm in Pulaski County but has said its main priority in Virginia currently is Rocky Forge. The Charlottesville company hopes to start site preparation in January, Montague said, and have the project completed by the end of next year.

Rocky Forge will be built in a remote part of the county, about 5 miles northeast of Eagle Rock. Active development — including building access roads, turbines and a substation — will take place on 82 acres of a nearly 7,000-acre tract designated for the project, according to the site plan.

Opponents have said the giant turbines will be an eyesore, make too much noise, generate shadow flicker and pose a threat to a scenic, mountainous area and the wildlife that lives there.

They also argue that with Virginia’s intermittent winds, the project will seldom produce its maximum capacity of 75 megawatts, or enough electricity to power about 21,000 homes.

But in agreeing to purchase the electricity, which will first be sold to Dominion Energy, the state of Virginia made it part of a larger renewable energy package that also includes solar. While solar panels generally produce more electricity in the summer, wind farms are most effective in the winter.

One reason is that the turbines must be turned off from dusk to dawn in the warmer months to protect bats, which are safely hibernating in caves when the wind generally blows the hardest.

In August, the Federal Aviation Administration found that the turbines would not pose a threat to passing airplanes, including low-flying military jets that have a training route in the area.

The FAA later said it had failed to notify some stakeholders of a public comment period that preceded its decision. The agency reopened its analysis and held a second public comment session that ended last month. No decision has been reached, according to a log on its website.

Although Rocky Forge will be the state’s first ridgeline wind farm, two pilot turbines began spinning earlier this year off the coast of Virginia Beach as part of a major offshore project.

At 624 feet tall, the turbines will not pose a threat to air navigation, the latest study conducted by the FAA found.

Opponents are challenging a permit issued for Rocky Forge Wind last year by the Virginia Department of Environmental Quality.

Virginians for Responsible Energy is asking the county to terminate a zoning application to build wind turbines atop North Mountain.

If wind turbines are allowed to tower up to 680 feet into the sky from a Botetourt County mountaintop, they would be higher than the tallest o…

Turbines as tall as 680 feet would be part of the first onshore wind farm in Virginia.

Apex Clean Energy says it expects to receive renewed approval after an administrative error led the FAA to reopen a public comment period.

The latest plan calls for 14 turbines, each one 612 feet tall, along the top of North Mountain.

This computer simulation from Apex Clean Energy shows what the Rocky Forge Wind Farm would look like from a residence 1.1 miles away. Revisions to the plan show 15 turbines standing 624 feet tall -- fewer, taller turbines than initially planned.