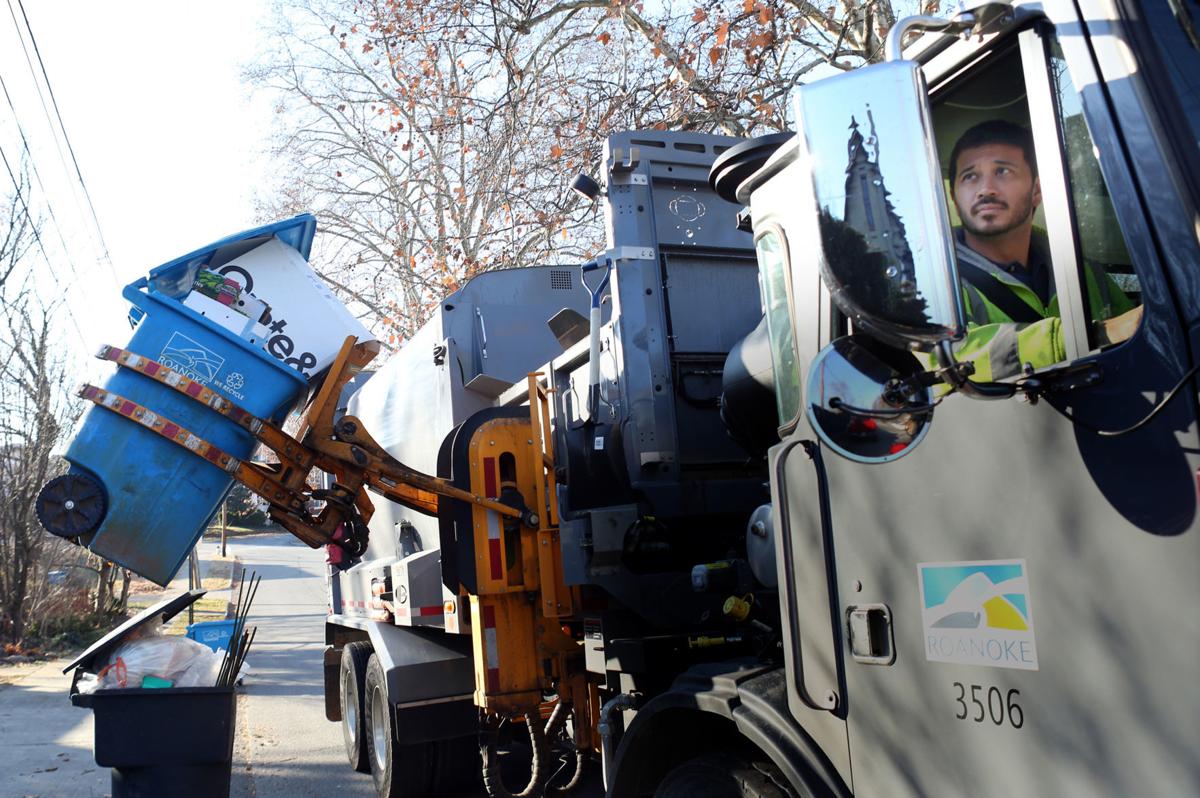 The past few years have not been good ones for the recycling industry. Problems started in 2018, when China, which for years had accepted thousands of shiploads a day of plastic and other recyclables from the United States, cut off the imports. Then the global pandemic hit, and business dropped again. 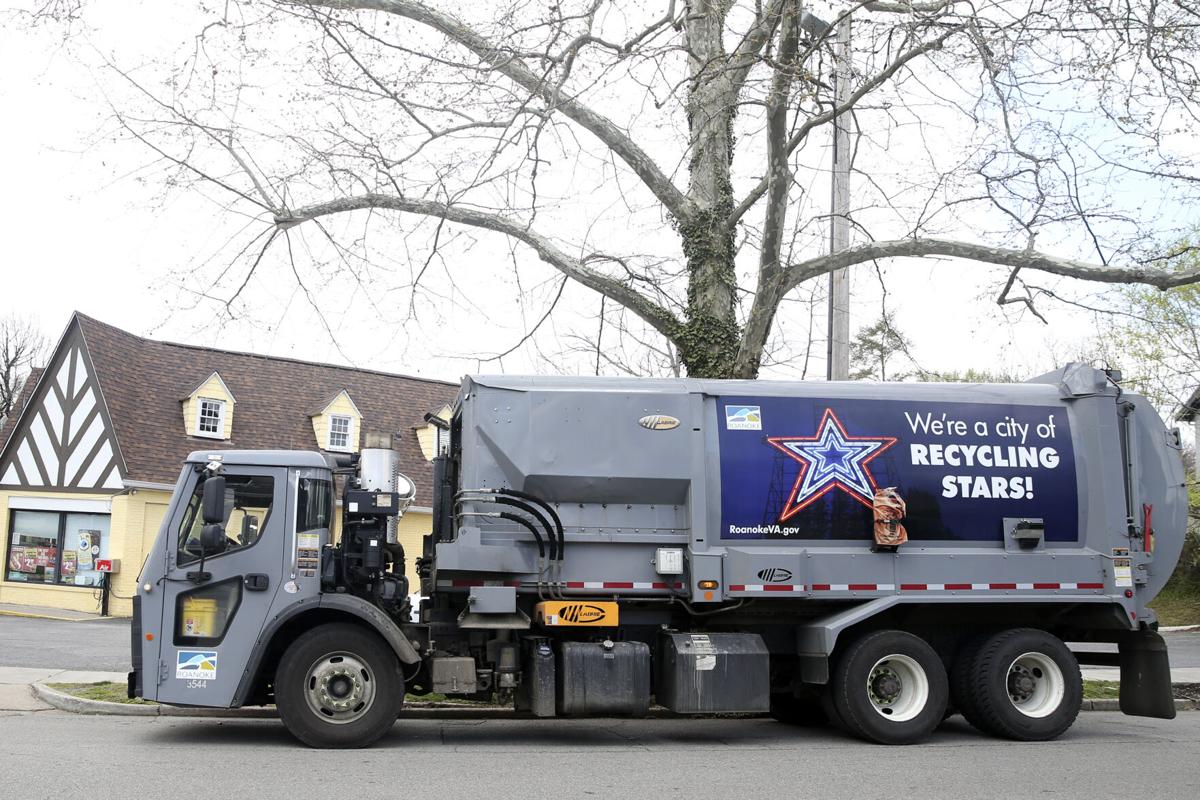 Preliminary numbers for 2020 suggest that recycling may be on the verge of a comeback. Decreased volumes from businesses were offset, to some degree, by people who were staying home and shopped more online, which led to a large increase in merchandise that was delivered to homes in cardboard boxes. 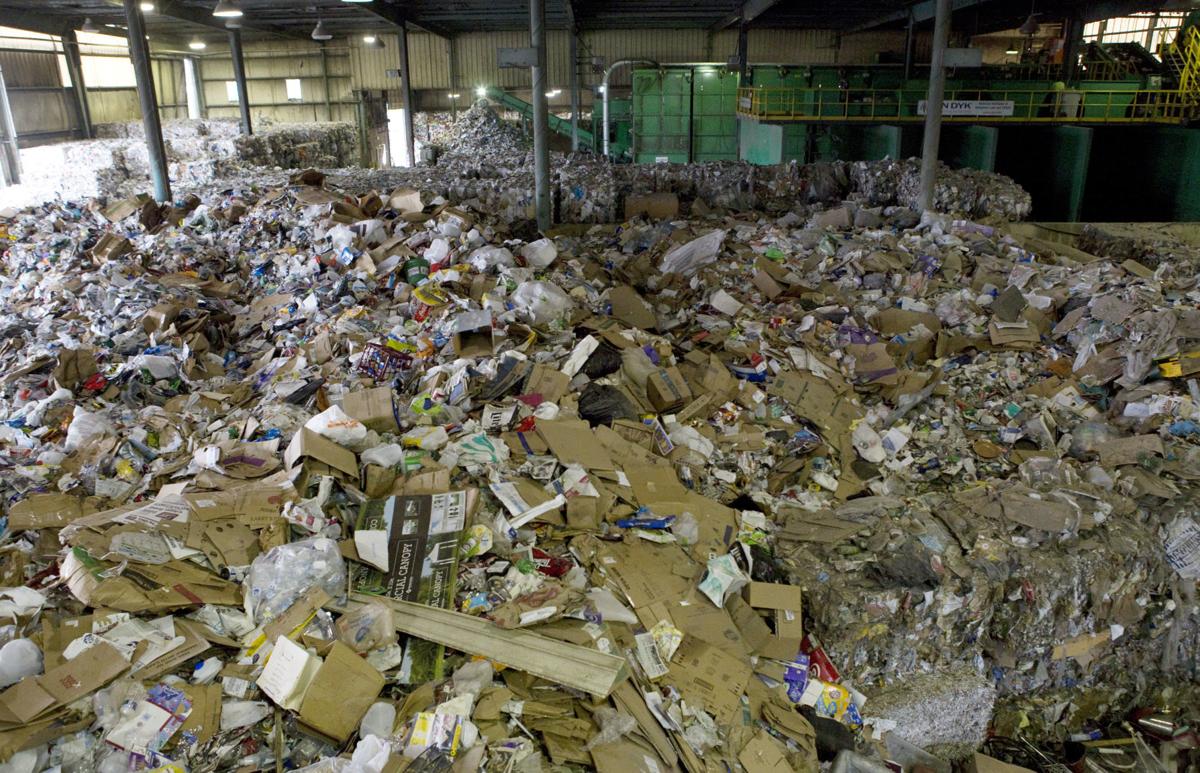 Piles of recycling wait to be sorted at the RDS recycling facility located on Korte Street in Roanoke. 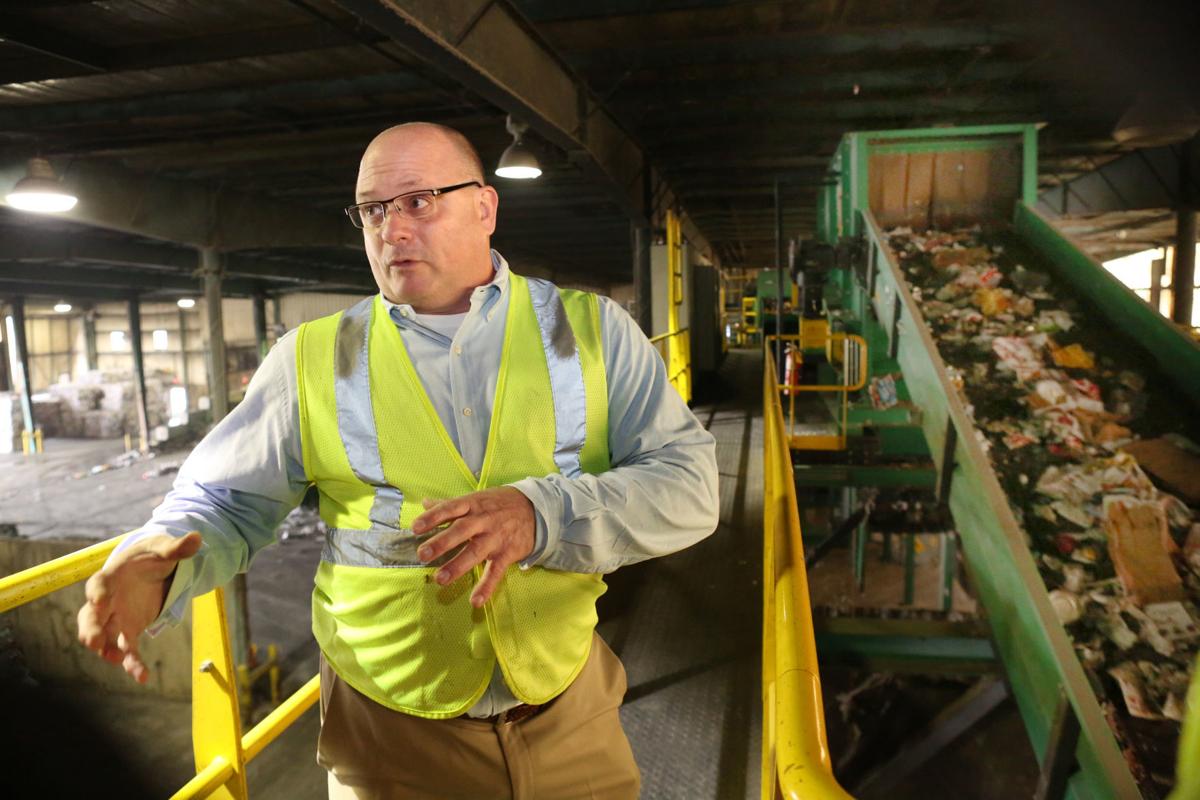 Joe Benedetto, president of Recycling and Disposal Solutions, is contending with a lack of customers for glass waste.

Behind a warehouse, in a strip of industrial properties along the Roanoke River, sits a huge pile of crushed glass.

It is about 12 feet high, 100 feet long, and estimated to weigh 1,810 tons. Mixed in with the pieces of glass are dirt, bottle caps and scraps of paper and metal. On a chilly and overcast morning in late March, its color matched the gray sky.

To most people, this is trash.

Not to Joe Benedetto, president of Recycling and Disposal Solutions of Roanoke, where the pile has been growing for two years. “It’s a recyclable resource,” Benedetto said, surveying the scene as a light rain began to fall.

“It’s a product that is not going to the landfill.”

Benedetto is working to develop a process to grind the crushed glass into a sand-like material and remove the contaminants, making it suitable for the production of concrete, asphalt and a variety of other uses.

But time caught up with him recently, when the Virginia Department of Environmental Quality cited RDS for a number of violations, including exceeding a storage limit of 150 tons for recyclable waste.

As part of a consent order, RDS — which takes recyclables collected by most local governments in the Roanoke and New River valleys, sorts them and finds a buyer — agreed to pay a fine of $21,263.

Benedetto gritted his teeth slightly when talking about the case, which came during a national downturn in the recycling industry, a global pandemic and financial issues that followed both.

“If you could create a perfect storm of problems for us, we probably had it,” he said.

“It has been quite a challenging adventure, I don’t know how else to describe it. But its root cause came from our desire to keep glass out of the landfill, because that is something we felt we shouldn’t be doing, as a recycling company.”

The past few years have not been good ones for the recycling industry.

Problems started in 2018, when China — which for years had accepted thousands of shiploads a day of plastic and other recyclables from the United States — cut off the imports, citing concerns with dirt and other contamination.

Gradually, other markets overseas and at home began to open up. Then a global pandemic hit, and business dropped again.

Virginia’s recycling rate was 43.2% in 2019, down about three percentage points from the year before, according to an annual report released in January by the Department of Environmental Quality. Figures for 2020 were not available.

Although the coronavirus did not spread to the United States until early last year, it impacted Virginia’s 2019 recycling rate by making it harder for localities to collect information from businesses, many of which were closed. Declines in the market caused by China’s shutdown also contributed to the decrease, the DEQ report concluded.

To calculate the state’s recycling rate, DEQ compares the number of tons recycled against the tons hauled to landfills, then assigns credits for things such as reuse of materials not considered municipal waste, like construction debris.

The 2019 rate is based on figures from 17 planning units with populations of more than 100,000. The Montgomery Regional Solid Waste Authority, the only unit from the Roanoke or New River valleys required to report, had a rate of 40%. The authority includes the county and the towns of Blacksburg and Christiansburg.

Some of the smaller units reported their numbers to DEQ, even though it was not required and not counted in the statewide rate. Vinton, which offers curbside pickup, had a rate of 59% in 2019. Salem reported a 34% rate.

Roanoke and Roanoke County did not submit reports for 2019. Roanoke County, which says it cannot afford to offer curbside pickup because of its 250-square-mile size, had a 42% recycling rate in 2016, according to Nancy Duval, the county’s solid waste manager.

Officials in Roanoke, who have said earlier that the rate was 29% in 2017, did not respond to requests for comment last week.

Preliminary numbers for 2020 suggest that recycling may be on the verge of a comeback, according to Teresa Sweeney, president of the Virginia Recycling Association.

Decreased volumes from businesses were offset, to some degree, by people who were staying home. Those people began to shop more online, which led to a large increase in merchandise that was delivered to homes in cardboard boxes, which then wound up in recycling bins.

“We call it the Amazon effect,” Sweeney said.

RDS has seen an increase in cardboard that has helped some. “The market has still not recovered to where it really needs to be to become sustainable, but it is better than it was before,” Benedetto said.

The impact of the pandemic, and the decreased demand for recyclables before then, has forced some governments to make cuts in their collection efforts, which were already operating on a break-even basis, Sweeney said.

“They’re trying to bring in enough money to support their programs, and they’re quite expensive,” she said.

Of all the materials — old newspapers, plastic bottles, cardboard boxes, aluminum and tin cans, emptied beer bottles — delivered by truck to RDS’s warehouse on Korte Street Southwest, glass containers are the hardest to find a new life for.

Some governments, such as Roanoke County, don’t accept glass at their recycling drop-off locations. “We stopped taking it at our sites many years ago, both for safety and market reasons,” Duval said.

Most of the bottles that are placed on a conveyor belt for sorting at RDS have already been broken up by compressors in collection trucks, which empty recycling bins from residential curbside bins and businesses.

As the belt moves through the building, the most valuable recyclables are pulled aside for storage by humans, robots and other mechanical devices. At the end of the line, crushed glass often winds up as one of the misfit toys in the recycling game.

For a while, RDS sold it for use as fill material for the construction of a road in the Rockbridge County landfill. Then it was shipped to a plant in North Carolina, which melted the glass and made new bottles from it, until that market dried up.

More often than not, the glass, or cullet, was dumped in a pile behind the warehouse.

There, it waited for RDS officials to complete a complicated process in which DEQ would declare the cullet beneficial for use as a fill material. That required the glass to be further crushed and ground with new equipment, which cost tens of thousands of dollars at a time when money was tight.

In March 2018, DEQ arrived at the site for the first of several inspections.

A consent order, recently posted to the agency’s website, lists a number of violations: exceeding a 150-ton storage limit, failing to reduce contamination in the pile, and not complying with a plan to purchase equipment needed to refine the glass.

RDS agreed to pay a $21,263 fine, broken down into eight installments through February 2023. The enforcement order will be finalized following a public comment period that lasts through April 16.

There has been no documented harm to the environment or public safety from the glass pile, according to Jerry Ford Jr., an enforcement specialist with DEQ. But the agency takes the position that the harm was to the regulatory system, and that any permit-holder found to break the rules will be held accountable.

Benedetto has no argument with that.

More than $100,000 has been spent on new equipment that will grind the glass and remove its contamination, essentially converting it to sand that can be used as fill material or an ingredient for concrete and asphalt.

Benedetto expects the pile will be gone by July 1, 2022, as required by the consent order.

“Sometimes taking the high road is the hard road to take,” he said. “But we think it will be beneficial for everyone involved.”

Public comments are being taken through April 16 on the enforcement action against Recycling and Disposal Solutions. Comments can be mailed the Department of Environmental Quality's Blue Ridge Regional Office, 901 Russell Drive, Salem, VA 24153 or emailed to Jerry.Ford@deq.virginia.gov.

Recycling continues to struggle in Roanoke and statewide

If Virginia’s recycling rate was measured by a 24-pack of bottled water, 11 of the empty plastic bottles would get recycled and 13 would wind …

The past few years have not been good ones for the recycling industry. Problems started in 2018, when China, which for years had accepted thousands of shiploads a day of plastic and other recyclables from the United States, cut off the imports. Then the global pandemic hit, and business dropped again.

Preliminary numbers for 2020 suggest that recycling may be on the verge of a comeback. Decreased volumes from businesses were offset, to some degree, by people who were staying home and shopped more online, which led to a large increase in merchandise that was delivered to homes in cardboard boxes.

Piles of recycling wait to be sorted at the RDS recycling facility located on Korte Street in Roanoke.

Joe Benedetto, president of Recycling and Disposal Solutions, is contending with a lack of customers for glass waste.