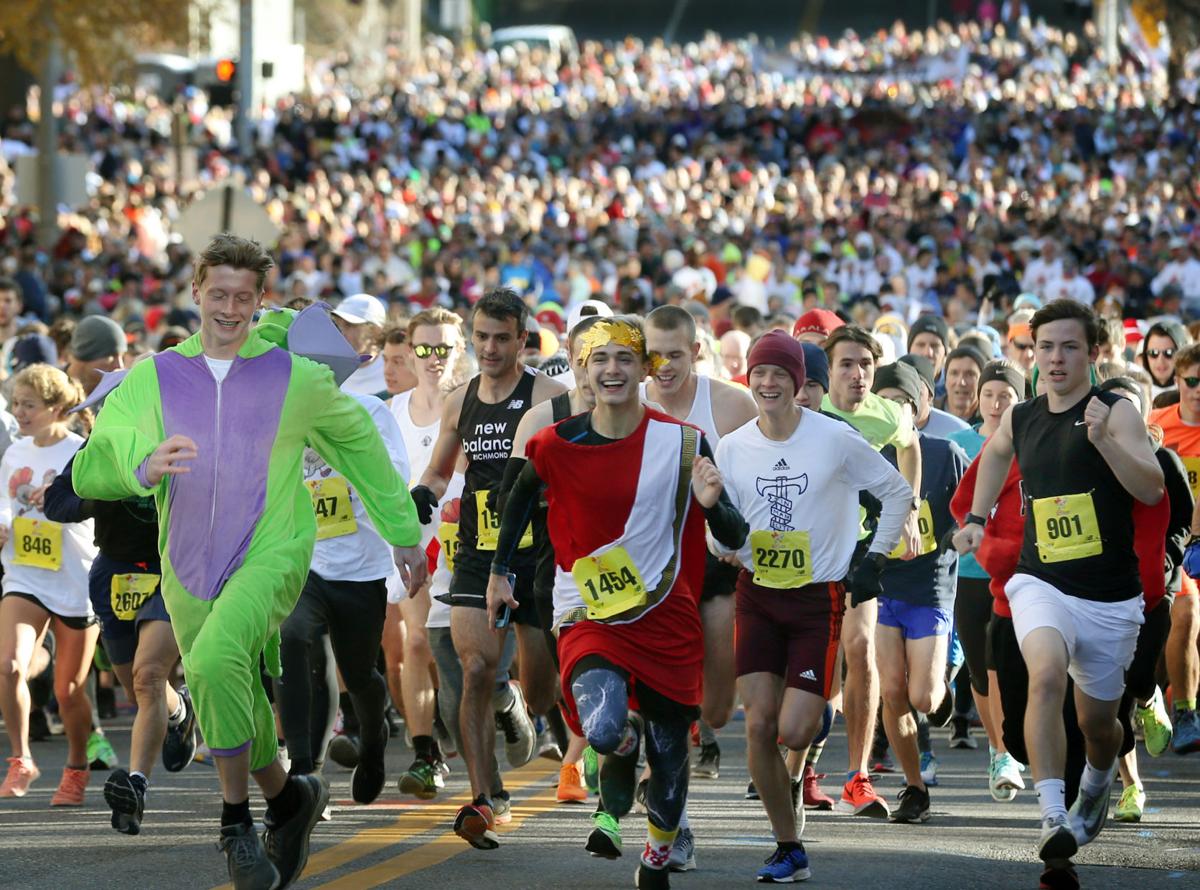 Racers take off at the start of the 14th annual Drumstick Dash in downtown Roanoke on Thanksgiving Day 2019. Organizers announced this week that the race will be virtual this year because of the pandemic. 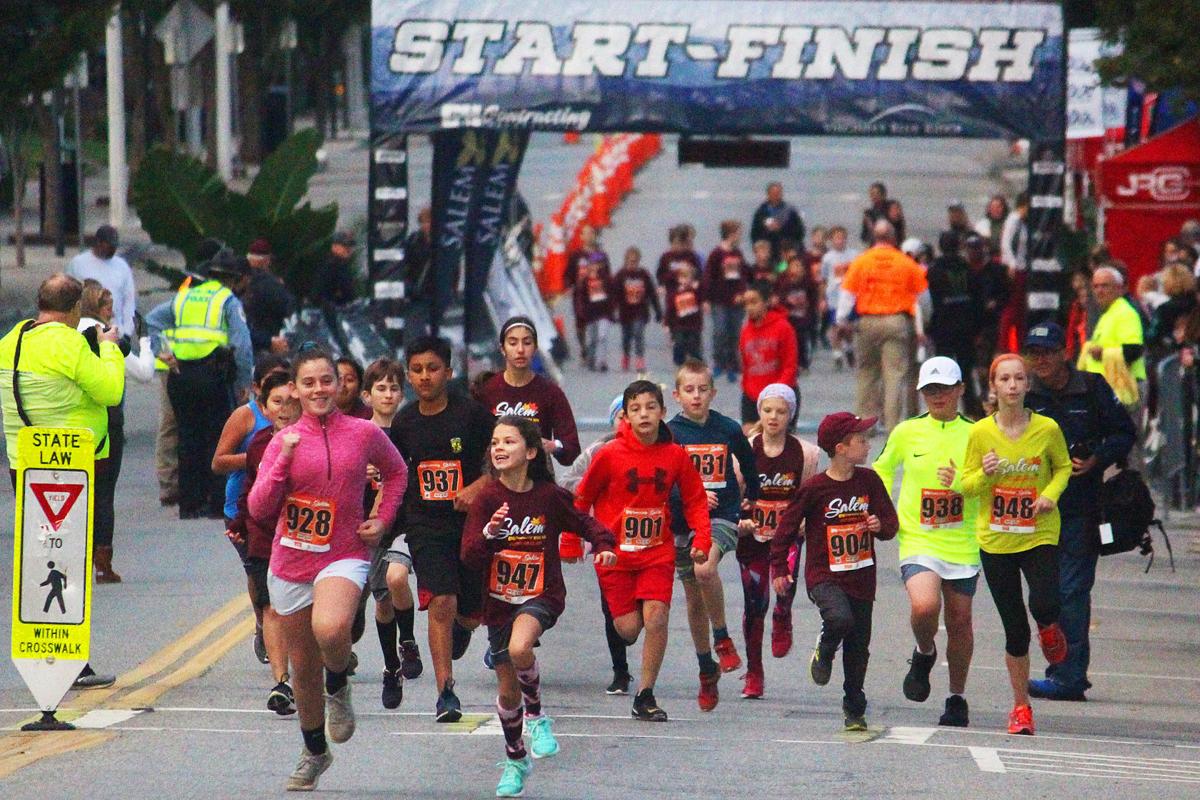 Youngsters come out of the blocks at the start of the kids’ fun run at the 2018 half marathon in Salem. The LewisGale Half Marathon will be virtual this year.

Molly Bullington wasn’t sure what to expect when she went live with that first event in June.

The owner of Blue Ridge Racing reasoned if she could get 200 or 300 people to sign up, it’d be a runaway success.

Her Roanoke-based firm specializes in the hectic work of organizing large-scale races that bring together crowds of runners and walkers for everything from 5Ks to full marathons.

The novel coronavirus, though, had put the kibosh on such events three months earlier. The racing year was upended, and fans of road races — of their camaraderie and challenge and competitive thrill — saw events everywhere toppled in a series of cancellations.

Virtual racing isn’t an entirely new idea in the running community. Even in pre-internet days, there are records of mail-in races being held, according to Runner’s World.

But those events had never really rivaled in-person races in popularity. Now, forced to change course, organizers found themselves wondering: Would runners still lace up for an all-virtual event?

Bullington found herself mulling that question when she launched her first virtual race challenge this summer.

Then she saw the ticker start to go up — and up and up. In the end, more than 750 runners registered for the challenge.

“It really exceeded my expectations by far,” she said. “I had no idea how successful it would be, but it turns out it was really successful.”

Virtual racing is increasingly part of the new normal as communities and event directors try to continue offering an outlet for those who want the fun or personal challenge of getting across the (now online) finish line.

Two major fall events in the Roanoke Valley — Salem’s half marathon in October and the Roanoke Rescue Mission’s Drumstick Dash in November — both announced this week that they’re going virtual.

In the spring, the Foot Levelers Blue Ridge Marathon, which has been called America’s toughest road marathon for its elevation gain, also went the virtual route.

Adapting and sustaining these events is important not only to the running community — which has rallied around the mantra “Running Is Not Canceled” to encourage one another to stick with their wellness goals — but to the nonprofit world, as most races benefit local charities.

In Roanoke, that is most keenly highlighted by the Atlantic Union Bank Drumstick Dash, the city’s biggest annual race and the single largest fundraiser for the Roanoke Rescue Mission.

The 5K, usually held on Thanksgiving Day, often brings out more than 11,000 people and raises enough money to cover the homeless shelter’s food budget for the next year.

That translates to more than 200,000 meals for one of the community’s most vulnerable populations, said race director Kevin Berry.

Donations also support food programs for families who are facing the difficult choice of buying groceries or paying bills.

“When we say your contribution is going to make a difference in the community, it’s really true,” Berry said. “That’s what makes the race and the people who support it so important.”

Organizers of the Drumstick Dash, now marking its 15th year, felt some sadness when it became clear that an in-person race wouldn’t be possible this year, Berry said.

But as alternate planning pushed forward, the team started embracing new ideas to keep the race fun and engaging even as it adapted to the new all-virtual platform.

Both events benefited charity. The parkway challenge is raising money for Friends of the Blue Ridge Parkway. The I-81 challenge, launched at a time when food banks were overwhelmed with need, helped Feeding Southwest Virginia and the Blue Ridge Area Food Bank.

The Drumstick Dash, for its part, sweetened its swag bag to include amenities like a medal and a high-performance shirt. A new 8K race was added to the mix of options, and organizers worked to get participants access to the RaceJoy app.

Leaders are optimistic that support for the event will remain high and that families who have made it part of their annual holiday tradition will continue to take part.

“We still have an awesome opportunity for our runners and walkers to have an amazing experience,” Berry said.

The LewisGale Half Marathon, which also has an 8K and a kids’ fun run option, also is looking ahead with optimism.

“Runners are a unique breed and they adapt to conditions and circumstances all of the time,” said spokesman Mike Stevens, adding that the virtual format has its own advantages.

Runners get the flexibility to mold their own schedules and set their own courses. And miles can be logged over a window of time — 15 days in the case of the Salem event and one month for the Drumstick Dash.

Joining a virtual race can help hardcore runners keep up with training goals, according to the organization Race Directors HQ, as well as be a less intimidating entry point for newer runners, some of whom have picked up the sport as a pandemic hobby.

And, virtual or not, setting a goal and conquering it pays its own dividends, Stevens said.

“We hope the runners see this as a unique opportunity,” he said in an email. “Plus, who doesn’t want to say they won a medal in 2020!”

The Salem Half Marathon is also offering gift bags and access to the RaceJoy app. The event benefits the Salem Food Pantry. The team organizing it includes Blue Ridge Racing.

With location constraints thrown out the window, another potential opportunity for virtual events is the chance to reach a new audience.

Bullington said that of the online-only challenges she’s done this year, more than half of the runners had never taken part in one of her events before.

Runners from as far away as Great Britain found the challenges and signed up — tracking their progress and comparing their stats with others from across the United States.

“I think people are definitely going to be very excited when we’re able to return to in-person races,” Bullington said. “But I also think there is going to be some demand and some room for creativity with these virtual outlets. It may very well be a product that’s here to stay.”

Participants in the Atlantic Union Bank Drumstick Dash will have the opportunity to check their times again this year on Thanksgiving Day.

Racers take off at the start of the 14th annual Drumstick Dash in downtown Roanoke on Thanksgiving Day 2019. Organizers announced this week that the race will be virtual this year because of the pandemic.

Youngsters come out of the blocks at the start of the kids’ fun run at the 2018 half marathon in Salem. The LewisGale Half Marathon will be virtual this year.