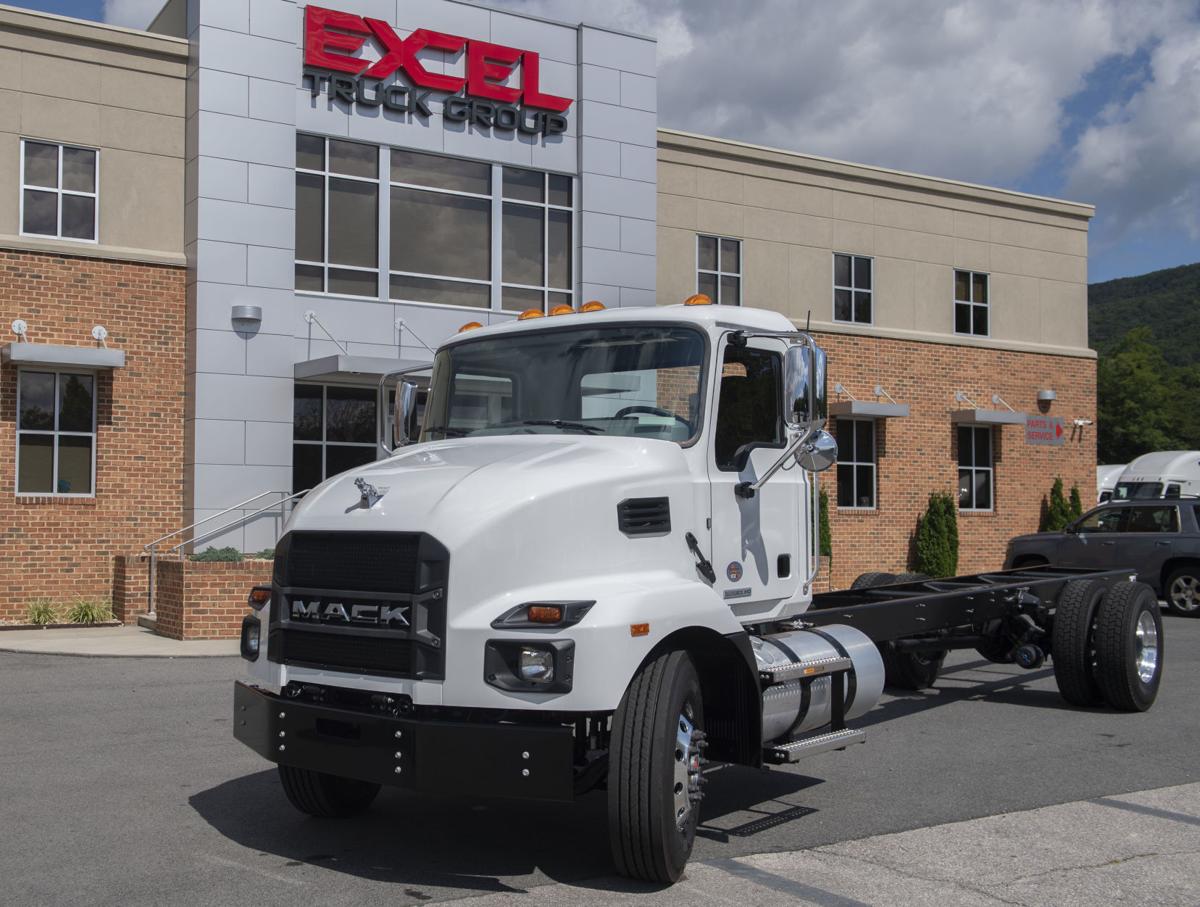 The Mack MD6 is a class 6 truck built in Roanoke County. It has a gross vehicle weight rating of 25,995 pounds and is now for sale at Excel Truck Group in Hollins. 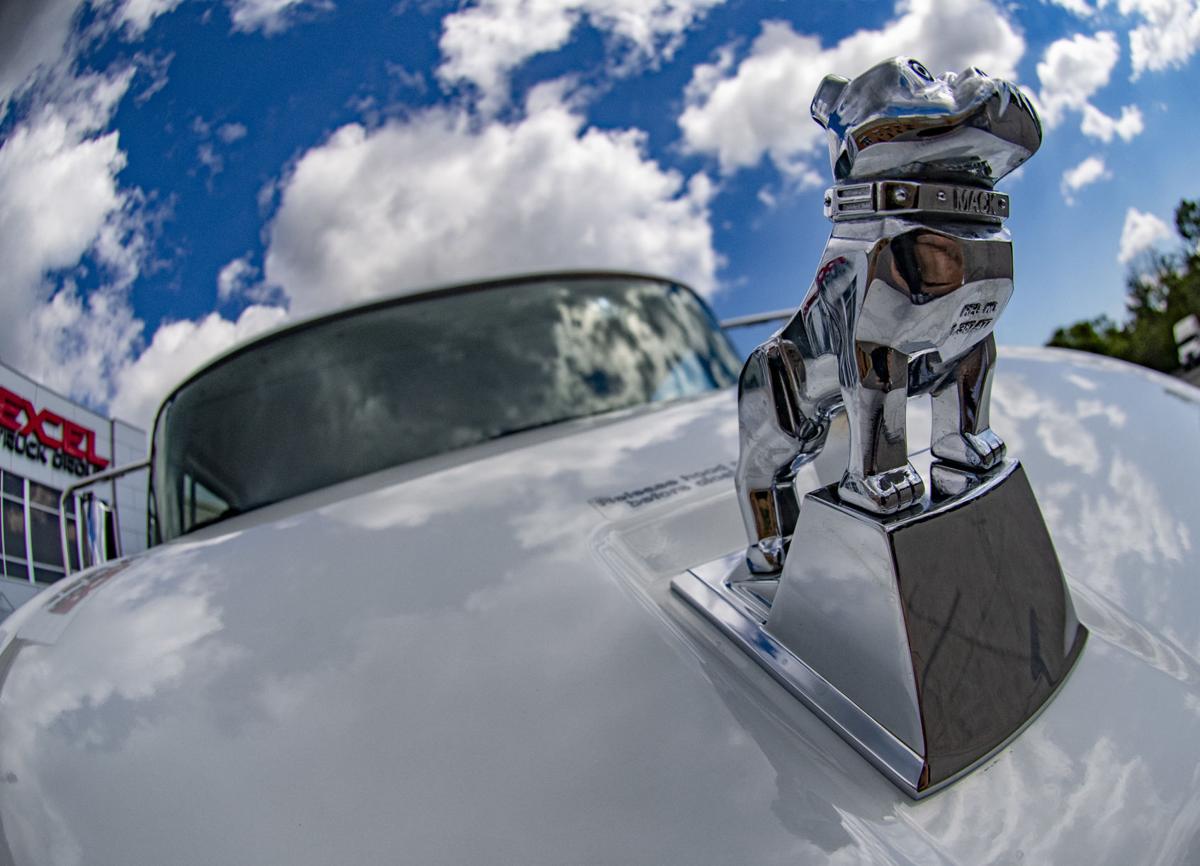 The iconic canine hood ornament, now 95 years old, can be spotted on almost every vehicle in the Mack Trucks lineup. The tiny pooch is known as Mack the Bulldog. 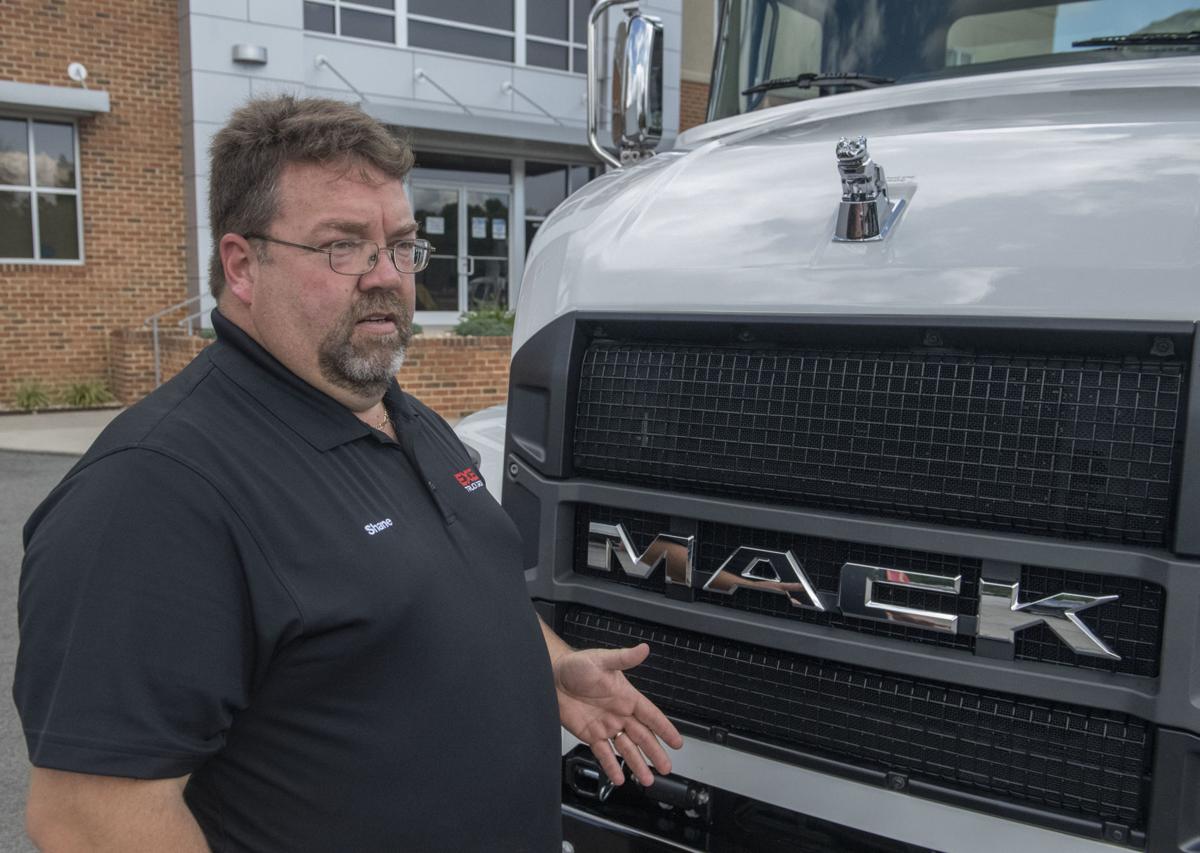 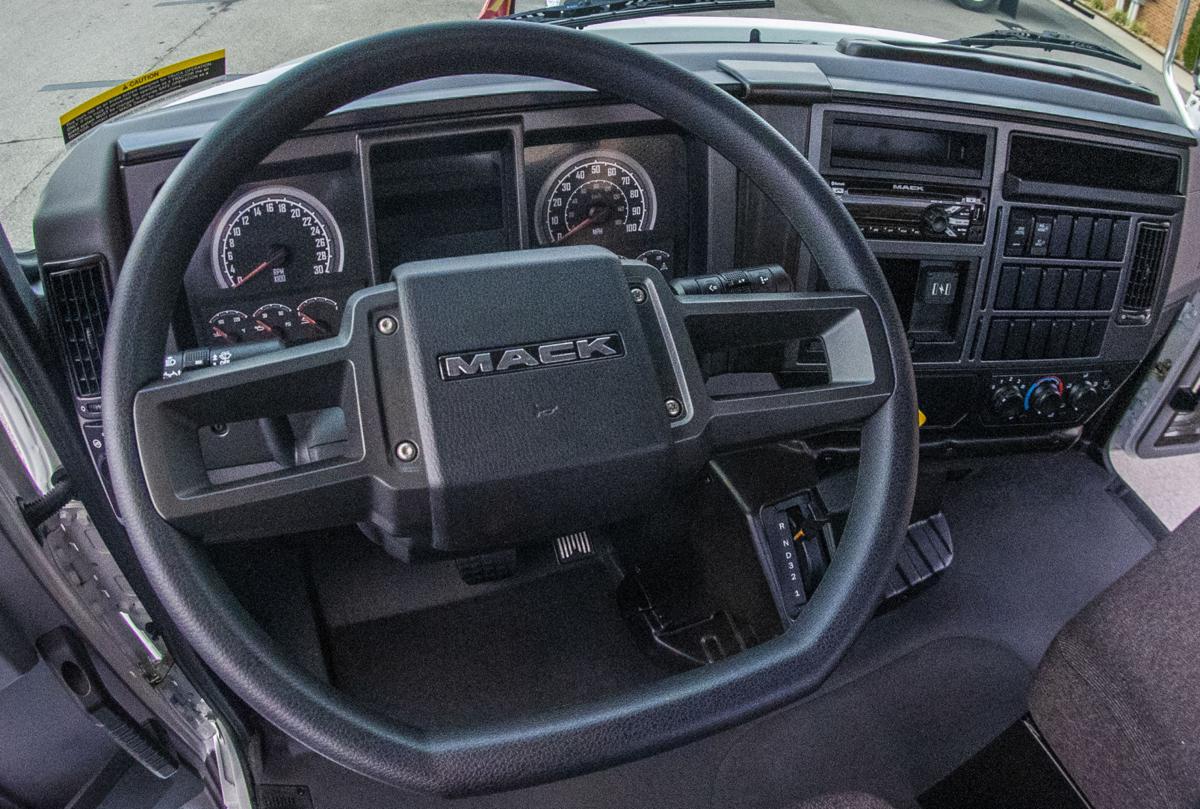 The interior of the cab features a wrap-around dashboard and a flat-bottomed steering wheel. The trucks are equipped with cruise control as well as power door locks and windows. 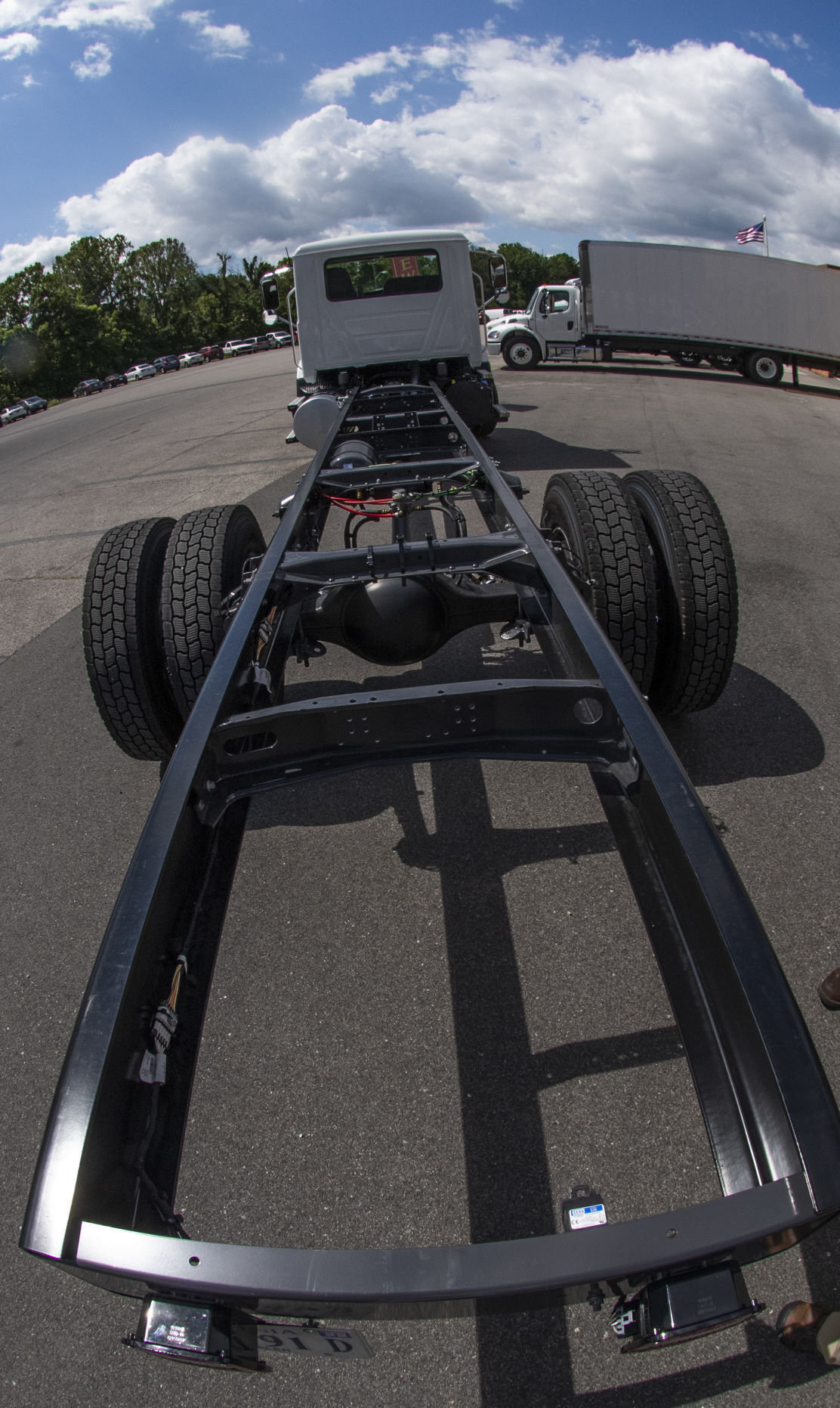 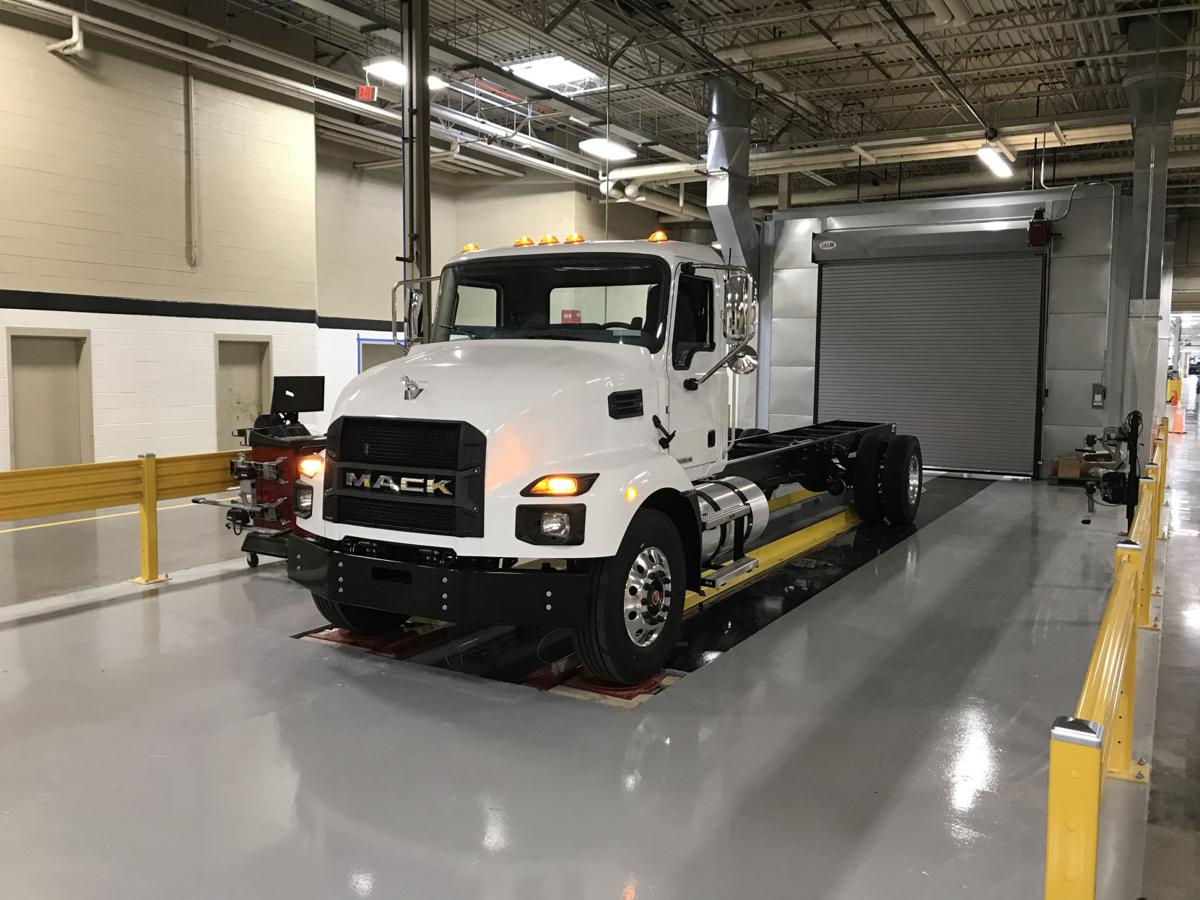 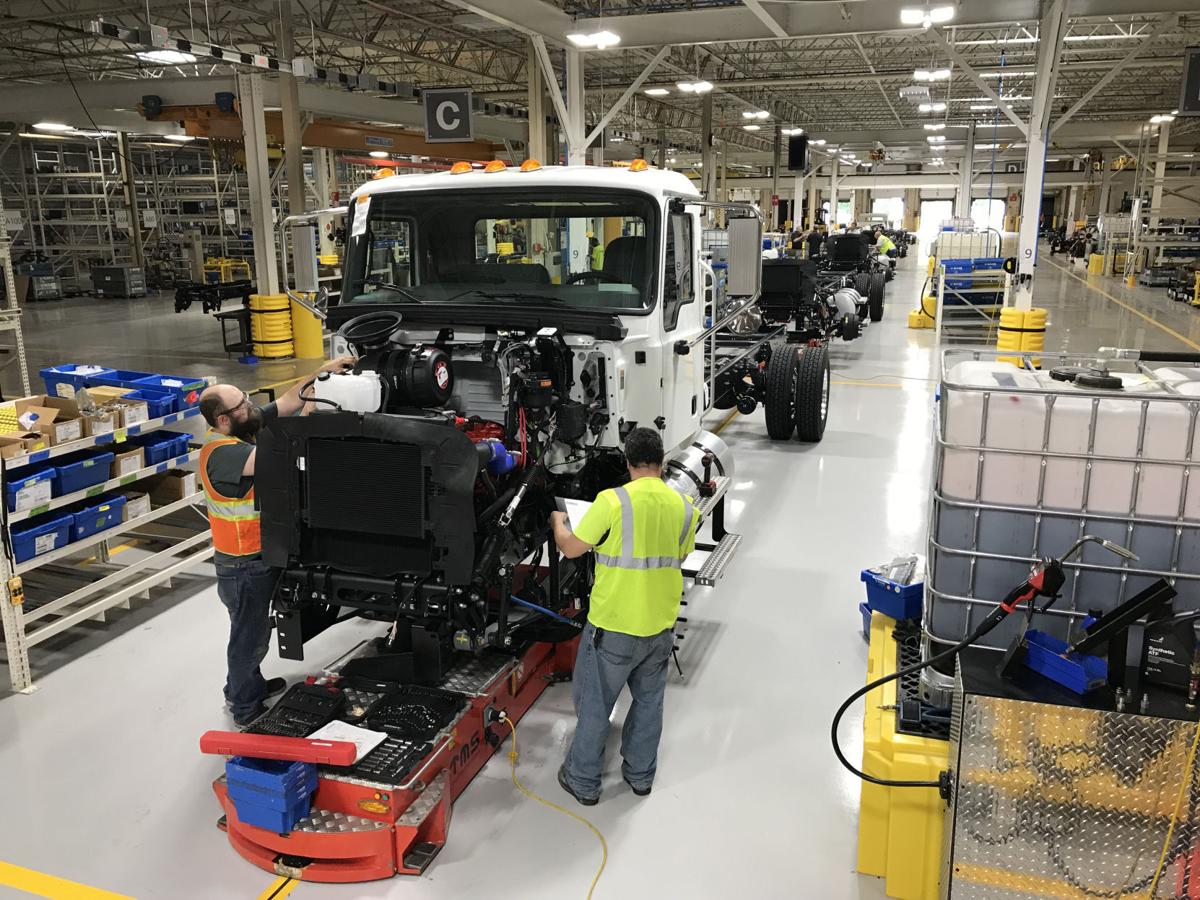 Volvo Group operates two truck manufacturing plants in the United States, one in Macungie, Pennsylvania, and one in Dublin. The number of truck plants was incorrect in an earlier version of this story.

Tim Kingery's name also was misspelled in an earlier version of this story.

Mack Trucks’ new Roanoke County factory is the culmination of a once-secret expansion project that will mark the region as a truck manufacturing center and create hundreds of jobs.

Volvo Group of Sweden chose to set down roots a second time in Southwest Virginia by locating its medium-duty truck plant in Glenvar, 40 miles from the group’s heavy-duty Volvo truck plant in Dublin.

It became the 13th truck manufacturing plant in the United States when it opened July 27 at a cost of $13 million, according to data from the Virginia Economic Development Partnership Authority. Virginia is ranked the fourth-largest state in the country for truck manufacturing employment, the partnership said. The new factory will only add to those numbers.

Mack sold a medium-duty truck at one time, but did not in 2018. It was a gap in offerings that the company decided needed filling and that the time was right. It received plenty of help from jobs-hungry economic developers once the project shifted into gear.

The Virginia Economic Development Partnership caters to businesses seeking assistance for new ventures and relies on a network of on-the-ground local economic development officials to market sites. It distributed a blind request on behalf of Mack Trucks that said a global manufacturer engaged in a startup venture needed a building at least 200,000 square feet in the western part of the state.

She responded with details of a building that she thought could qualify. Not long after, the prospect wanted to see the building. Loope drove out to Valley TechPark in Glenvar, created by Roanoke County in 1994 and set a few hundred feet south of U.S. 11/460. R.R. Donnelley built the park’s flagship facility, a 278,000-square foot structure, in 1997. But Donnelley departed in 2017 amid a slump in commercial printing.

The meeting was set to occur at the former book plant.

“I had no idea who I was meeting with,” Loope said. “I get out of my car and I’m walking to the front of the building and I immediately knew the gentleman standing at the doorway and a big smile came across my face.”

“I know you,” Loope said, she recalled.

“I know you, too,” the man said. It was Patrick Collignon, the former general manager of the Dublin Volvo truck plant. He had migrated over to a special projects role with Volvo Group to help oversee the development of a medium-duty truck for Mack. Loope and Collignon had worked together on economic development initiatives in the New River Valley.

Loope was briefed but could not divulge the project due to a non-disclosure agreement.

Economic developers code-named Mack’s truck project Project Victory and began to sense that something significant was about to unfold. Volvo Group is a $46 billion conglomerate that produces a variety of trucks plus construction equipment, buses, military vehicles, marine engines and portable power units. It operates an autonomous vehicle division and a financial services division. It generates about 30% of its sales in North America.

Its Dublin plant, which makes Volvo trucks, is undergoing a $400 million expansion. Volvo Group also operates a plant in Macungie, Pennsylvania, where it produces Mack Trucks.

Long before the visit to the empty book plant, the project had been proceeding in an unmarked industrial bay at the New River Valley Business Center, a business incubator and office facility five miles from downtown Radford.

The white prototype bore no name but exhibited Mack styling and characteristics. “It was like an unmarked police car. You know it’s a police car but it’s unmarked,” Sweet said. “Around the community, it was somewhat like a Yeti. No one believed it but every now and then someone would spot it but they didn’t know what it meant.”

The company spokesman confirmed use of the Fairlawn center and described as just one of “a variety of North American locations” where a cross-functional team worked on aspects of the new vehicle. Heffner also confirmed the involvement of Collignon, saying he has since left Volvo.

It was eventually time to make a deal.

Mack had more than one possibility. Sweet said Pulaski County offered a building in Fairlawn. Mack favored the former book plant but didn’t want to buy it. Loope wrote a letter to the building owner on behalf of an unnamed buyer stating an offer. Negotiations ensued between the owner and Camrett Logistics of Wytheville, a company Volvo already had worked with in the past. Camrett bought the plant and leased space to Mack.

Mack lined up parts. Among its suppliers is Metalsa Structural Products in Botetourt County, according to Shane Brown, territory sales representative at Excel Truck Group on Lee Highway in Hollins, which carries the new Mack trucks. Each truck has two Metalsa-made truck rails that span the vehicle’s length like twin spines.

The plant’s machinery was brought in and set into place. Brown said there are two lines at the plant, one to generate the frame and running gear and one to create the cab, and added that the two lines converge at a point where truck builders attach the cab atop the frame.

At that point, a new Mack Truck MD is born.

Brown went to the plant and picked up a unit for marketing purposes.

“I’ve taken it out on eight demonstrations. It’s been pretty well received by everybody,” Brown said.

Tim Kingery, vice president of Power Line Rent-E-Quip in Roanoke, said his reaction to the new truck was positive. Power Line rents and sells work trucks for the utility, sign, lighting, telecommunications and forestry industries. The company buys vehicles and mounts aerial devices and bodies on them for the various applications. Kingery expressed confidence that the Mack truck would perform well in the kinds of rugged settings his clients encounter.

“We were pretty impressed,” he said.

The new Macks are available in either class 6 or class 7, a designation that’s governed by the maximum loaded weight of the truck. Cummins makes the diesel engine used — it’s fire-engine red — while Allison makes the transmission. Brown declined to say how Excel Truck will price the truck, but said it will be comparable to other class 6 and class 7 vehicles. A hypothetical purchaser of such a truck could spend $60,000 or even $80,000, he said.

Medium duty is considered a more stable truck segment than heavy-duty, with its seesawing demand curve that sways with economic conditions. That’s due in part to the fact that a medium-duty truck can be equipped for dry or refrigerated delivery, a tank, hauling and dumping, or flat-bed applications.

Loope thinks Project Victory turned out to be just that.

“They’re stable, they’re a clean environment, they have good benefits, they create in-demand positions. That attracts people,” she said. “I think that this is the type of project technically that, long term, could attract new people moving here to work there, which will help grow our economy and population base and all those things we’re trying to do to put Roanoke on the map.”

Get ready for ‘supercharged’ economy after pandemic

Get ready for ‘supercharged’ economy after pandemic

Mack Trucks will invest $13 million to open a manufacturing plant in western Roanoke County, the company announced Thursday. The plant, which …

New Mack Trucks to roll off the line in September, company says

The Roanoke County Board of Supervisors on Tuesday approved a $700,000 performance agreement with Mack Trucks to offset some of the company’s …

Mack Trucks plans to invest $13 million in Roanoke County by opening a new facility where it will manufacture medium-duty trucks.

The Mack MD6 is a class 6 truck built in Roanoke County. It has a gross vehicle weight rating of 25,995 pounds and is now for sale at Excel Truck Group in Hollins.

The iconic canine hood ornament, now 95 years old, can be spotted on almost every vehicle in the Mack Trucks lineup. The tiny pooch is known as Mack the Bulldog.

The interior of the cab features a wrap-around dashboard and a flat-bottomed steering wheel. The trucks are equipped with cruise control as well as power door locks and windows.