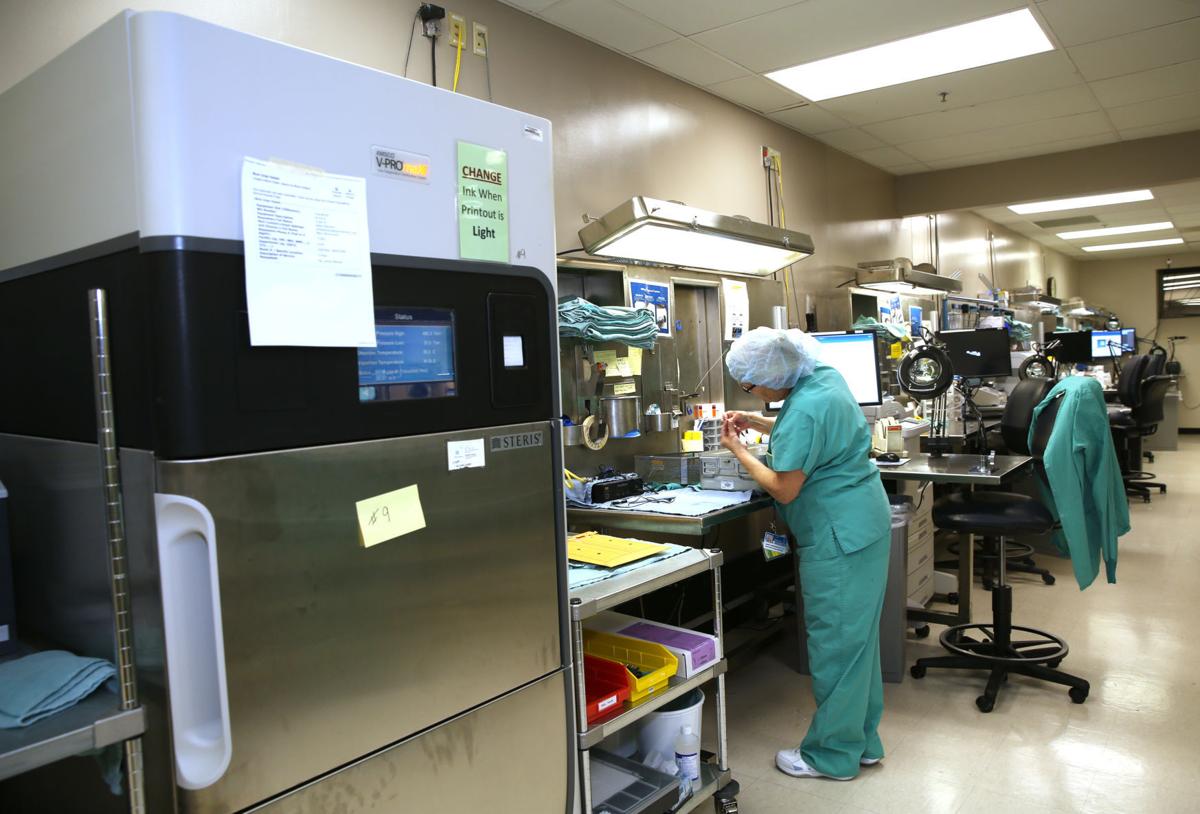 Janice Anderson, Operating Room Services, organizes instruments in the clean area of central sterilization at Carilion near some of the decontamination chambers. 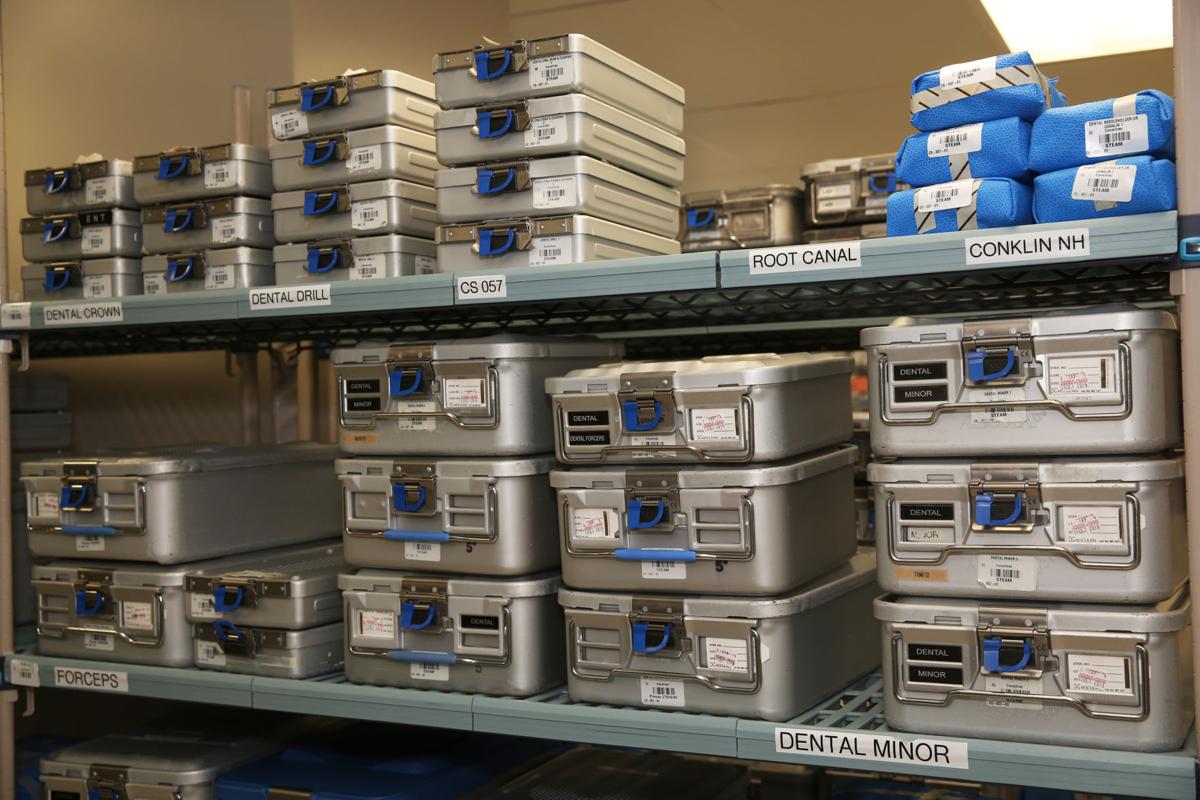 Instruments for dental procedures are processed and ready in the clean area of central sterilization at Carilion Roanoke Memorial hospital. 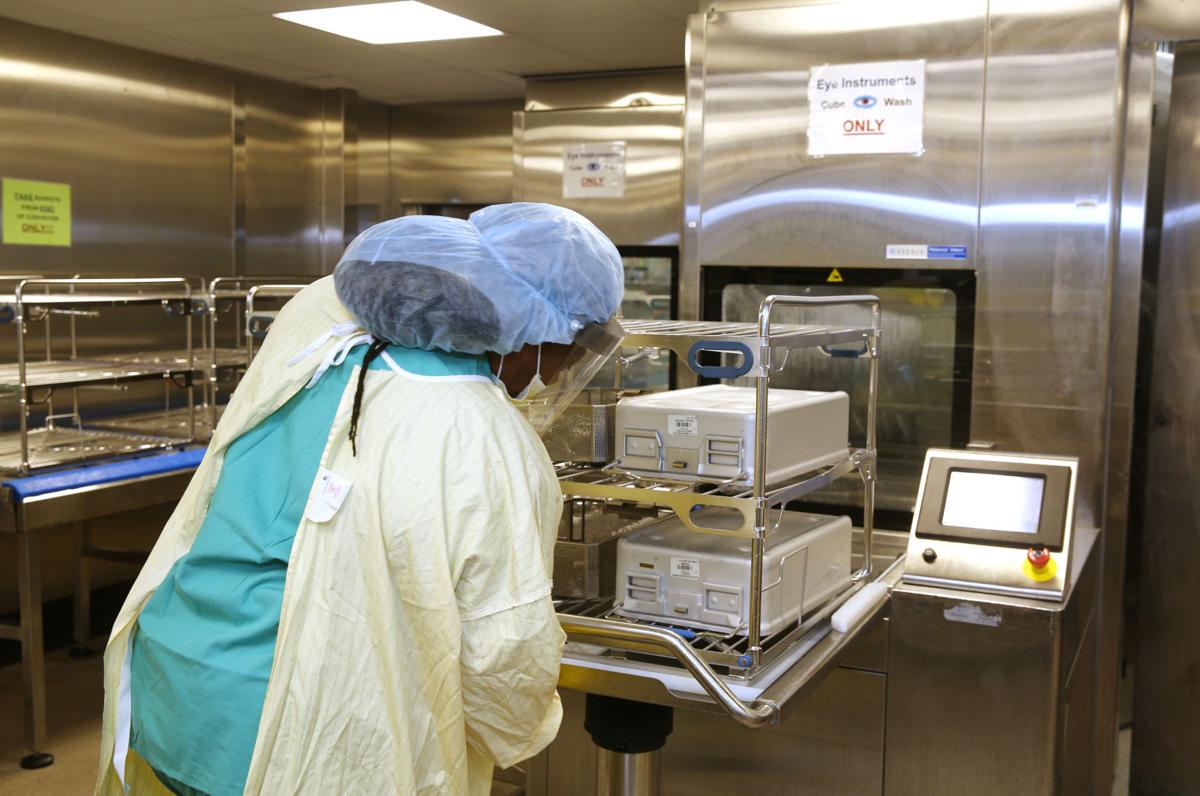 Mary Preston who has worked at Carilion for 20 years as a Central Sterilzation Tech 3 trainer puts medical instruments washed in enzymatic detergent and water regulated between 90-110 degrees into a large washer-decontamination chamber in Central Sterilization at Carilion Roanoke Memorial hospital. 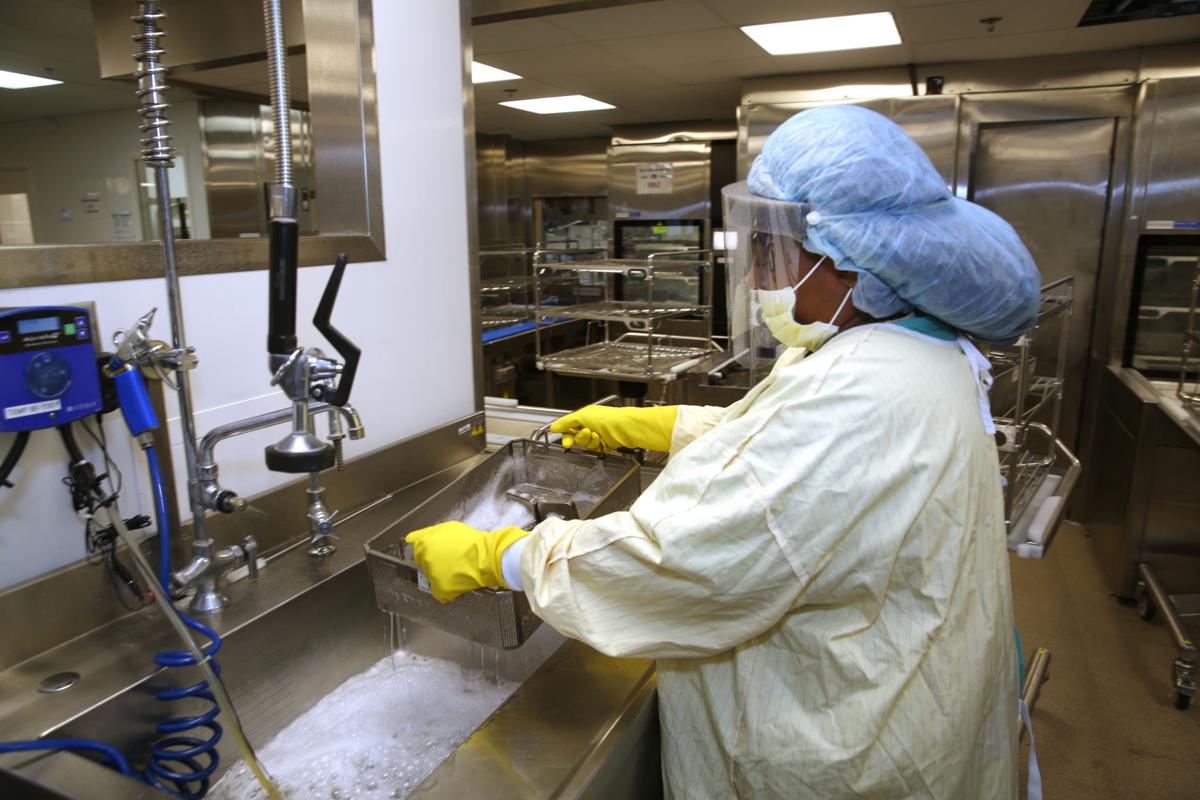 Tech Mary Preson washes instrument in a controlled environment. Since the quality controls were adopted, 40 of 47 Carlion practices that previously sterilized instruments on site have switched to the centralized sterilization process. 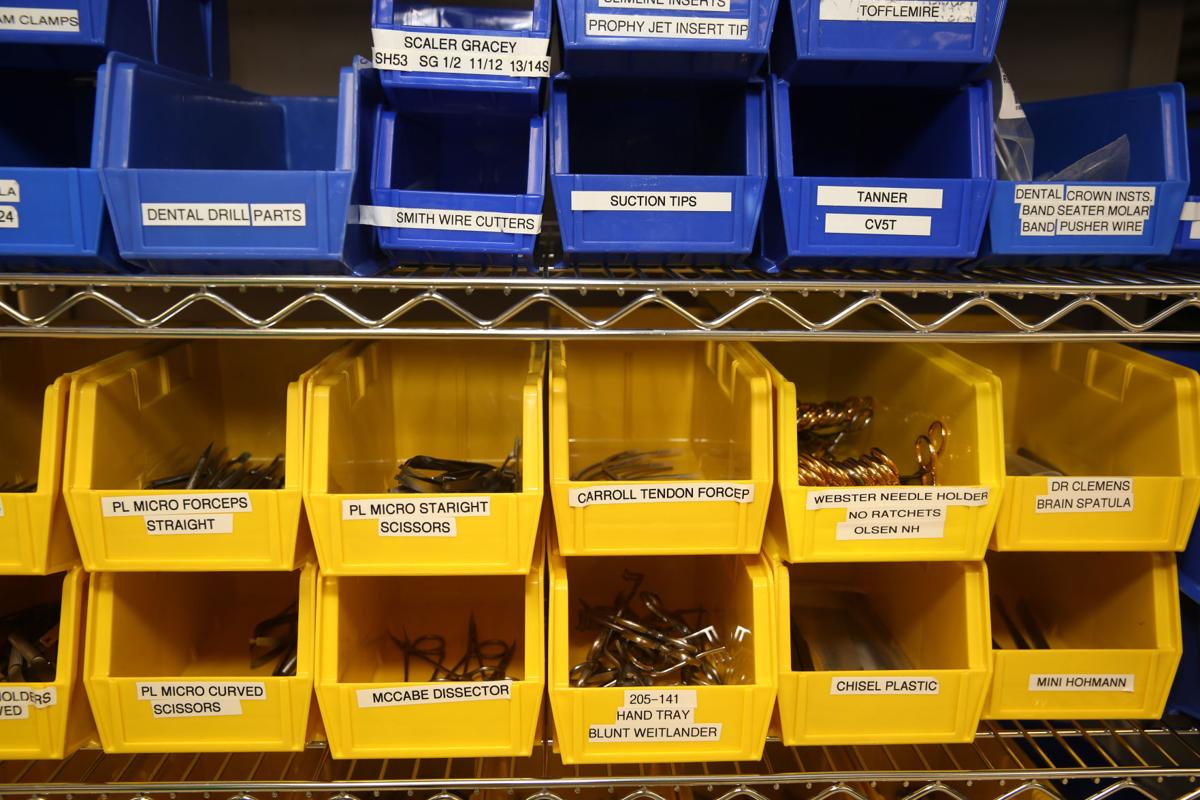 An array of sterilized medical instruments, many for surgical procedures, are organized and ready on shelves in the clean area of central sterilization at Carilion Roanoke Memorial hospital.

Every weekday morning, a 20-member team gathers at Carilion Roanoke Memorial Hospital to talk about everything that went wrong the day before. Each patient fall, employee needle stick, central line infection, medication error, unanticipated death is picked apart until a portrait of the culprit emerges.

The team is seeking to determine what — not who — caused the error. It’s a shift in a health care culture that traditionally drilled down through mistakes, grilling the people involved until a finger could be pointed and punishment meted.

Instead, Carilion is embracing the concept that even the most highly trained, dedicated humans will err. The goal, then, is to redesign processes and systems to keep mistakes from harming patients.

Safety engineering is not a new concept. Other industries already look at the way people work to find ways to do jobs more efficiently and more safely. But applying the concept to health care has been a slow process.

“The metrics we report today will change over the next five years,” said Dr. Ralph Whatley, Carilion’s chief quality officer. “What we aspire is, for the most important metrics for health and safety, to be in the top 10 percent, if not 1 percent.”

To get there, Carilion plans to ramp up efforts to move further away from a culture of denial to one that encourages employees to point out the potential for errors, he said.

“Carilion is within the standards of care set by state and national organizations,” said Steve Arner, Carilion’s chief operating officer. “Countless agencies and organizations measure our quality based on hundreds of thousands, if not millions, of data points. Depending on which ratings, collectively as a system, we fall in the middle or higher upper ratings.”

Arner said Carilion expects to be a leader in quality in patient safety. Part of the plan entails deploying rapid 90-day projects that identify areas of improvement, engage the people involved in the process and then implement changes, which are measured to determine whether they’re working.

Some of the projects cut across departments.

“We can look at any work process to look for efficiency and quality,” said Paul O’Quinn, Carilion’s director of process improvement. “We can figure it out with an analytical approach that takes away some of the blame and is seen as objective.”

In 2000, the Institute of Medicine published “To Err is Human: Building a Safer Health System.” The report found that at least 44,000 people, and perhaps as many as 98,000, die each year in hospitals as the result of medical errors.

In the report’s wake, Congress passed legislation to reduce medical errors by 50 percent in five years. Money was spent to hire quality and safety officers. The public focused on errors. The Centers for Medicare and Medicaid began to adjust payments based on quality measures, and published star ratings on its website for patients to compare hospitals.

He came to medicine through Virginia Tech’s industrial safety engineering program. He was enrolled in the graduate program looking forward to a career in aviation safety, earning his pilot’s license at the Roanoke-Blacksburg Regional Airport, and working as an EMT for Radford’s ambulance service when he discovered emergency department medicine. He enrolled in medical school and has applied lessons learned in aviation to patient safety.

Until the 1970s, pilot error was blamed for numerous crashes, he said. The airline industry was forced to change and look at what caused the pilots to make mistakes, and then to design systems to catch the mistakes before passengers were harmed. Fairbanks said pilots and air traffic controllers still make an average of four mistakes every hour, and yet with 30,000 flights a day, air travel is one of the safest activities a human can do in the United States.

The same could not be said for health care.

“Health care is just about the most dangerous thing we can do in this country. You think about risk. Many people are afraid to fly. You should be afraid to go in the hospital,” he said.

Carilion, which shifted its business model from a collection of hospitals and primary care offices to a clinic that integrates care across platforms, also shifted its patient safety and quality measures about four or five years ago, and is preparing to accelerate efforts.

Fairbanks said Carilion is among health care leaders as it turns away from the practice of looking for someone to blame.

“Health care is a place where people are really, really highly trained with high standards. There are few professions that have the standardization we have in medicine, nursing, pharmacy,” Fairbanks said. “We have smart people, and we have well-intentioned people. Those people are going to make mistakes.”

Fairbanks said the health care industry needs to consider human factors, a type of engineering that crunches data about how people perform tasks and use equipment, then applies the results to designing products and procedures. Ergonomic chairs are an an example of this type of engineering.

Fairbanks showed a picture of a defibrillator that was designed without considering how people would use it. The machine features a big green button that says “On” that’s often mistakenly pushed during an emergency instead of a less-prominent red button that says “Shock.” The “on” button actually turns off the unit — wasting life-saving minutes to recharge.

Yet, Fairbanks said, if he tried to shut down the projector he was using during his presentation — a much simpler machine — he’d get a message asking him if he was sure he wanted to turn it off.

One of Carilion’s success stories is a pharmacy project team at Carilion Tazewell, which looked at why the hospital consistently posted the worst rate among Carilion hospitals for scanning medications into patients’ electronic records. The team found a few barriers. Among them: The wireless connectivity didn’t work well in all rooms. Since the improvement project, Tazewell’s scanning compliance has stayed above 98 percent for the last two years.

A team at Carilion Stonewall Jackson Hospital knocked down its high rate of infections from catheters to zero for 19 consecutive months. Other teams evaluated the quality of different surgical masks, instituted a central process for sterilizing equipment and looked for the best way to help patients lose weight.

“The National Patient Safety Foundation would like to see much more emphasis and research dollars go into ambulatory and home settings, because we don’t have as good a grasp as to what the problems are in those settings and how to avoid them,” said Dr. Tejal Gandhi, the foundation’s president and CEO.

The shift to look at safety outside of hospitals is also being embraced by the Virginia Hospital and Healthcare Association, which has made quality and patient safety one of its top priorities.

It publishes hospital patient safety scores on its websites and provides ways for its members to share best practices. The goal is to make Virginia tops in the nation for patient safety, and not just in hospitals but at home, said spokesman Julian Walker.

Carilion Clinic has launched a stepped-up plan to reduce medical errors by anticipating what might go wrong before it happens. My story Sunday…

A federal report ranks Virginia among the top 10 states in health care quality, reflecting a rise from previous reports that placed it in the …

Janice Anderson, Operating Room Services, organizes instruments in the clean area of central sterilization at Carilion near some of the decontamination chambers.

Instruments for dental procedures are processed and ready in the clean area of central sterilization at Carilion Roanoke Memorial hospital.

Mary Preston who has worked at Carilion for 20 years as a Central Sterilzation Tech 3 trainer puts medical instruments washed in enzymatic detergent and water regulated between 90-110 degrees into a large washer-decontamination chamber in Central Sterilization at Carilion Roanoke Memorial hospital.

Tech Mary Preson washes instrument in a controlled environment. Since the quality controls were adopted, 40 of 47 Carlion practices that previously sterilized instruments on site have switched to the centralized sterilization process.

An array of sterilized medical instruments, many for surgical procedures, are organized and ready on shelves in the clean area of central sterilization at Carilion Roanoke Memorial hospital.