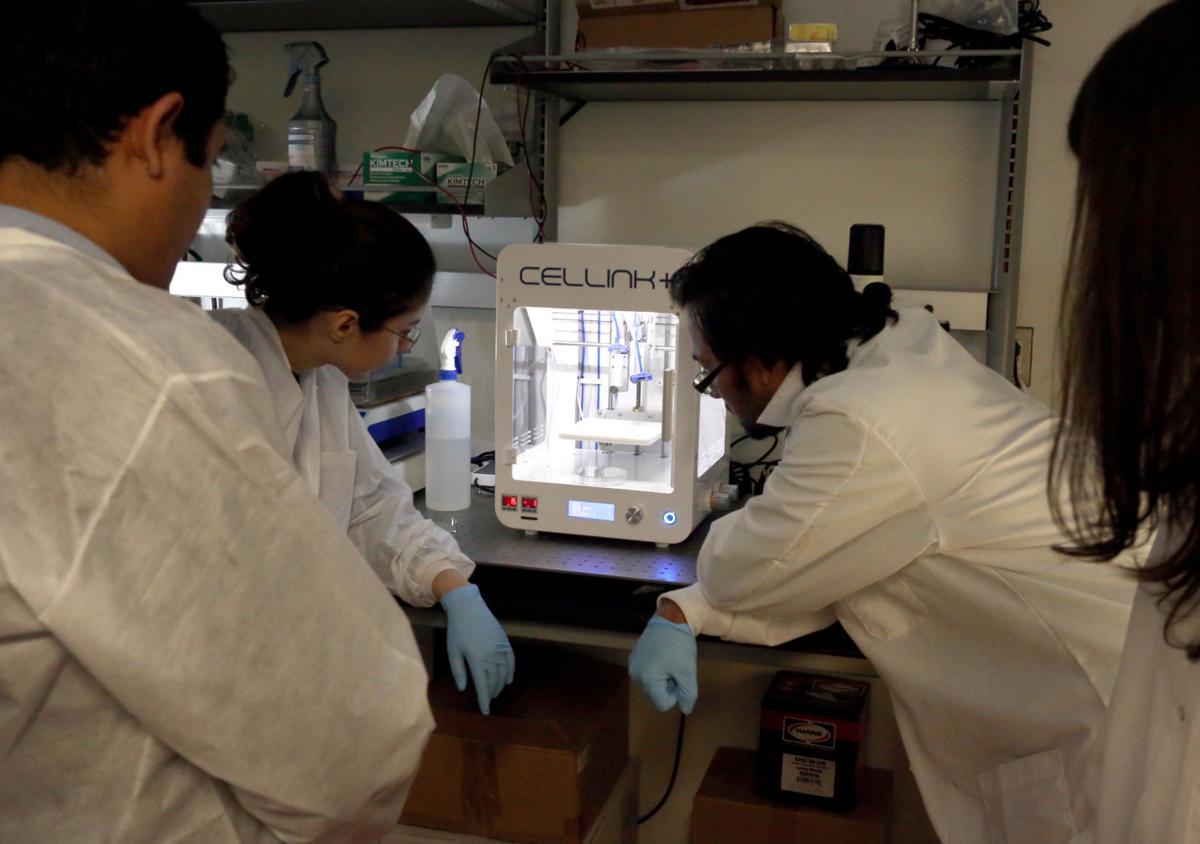 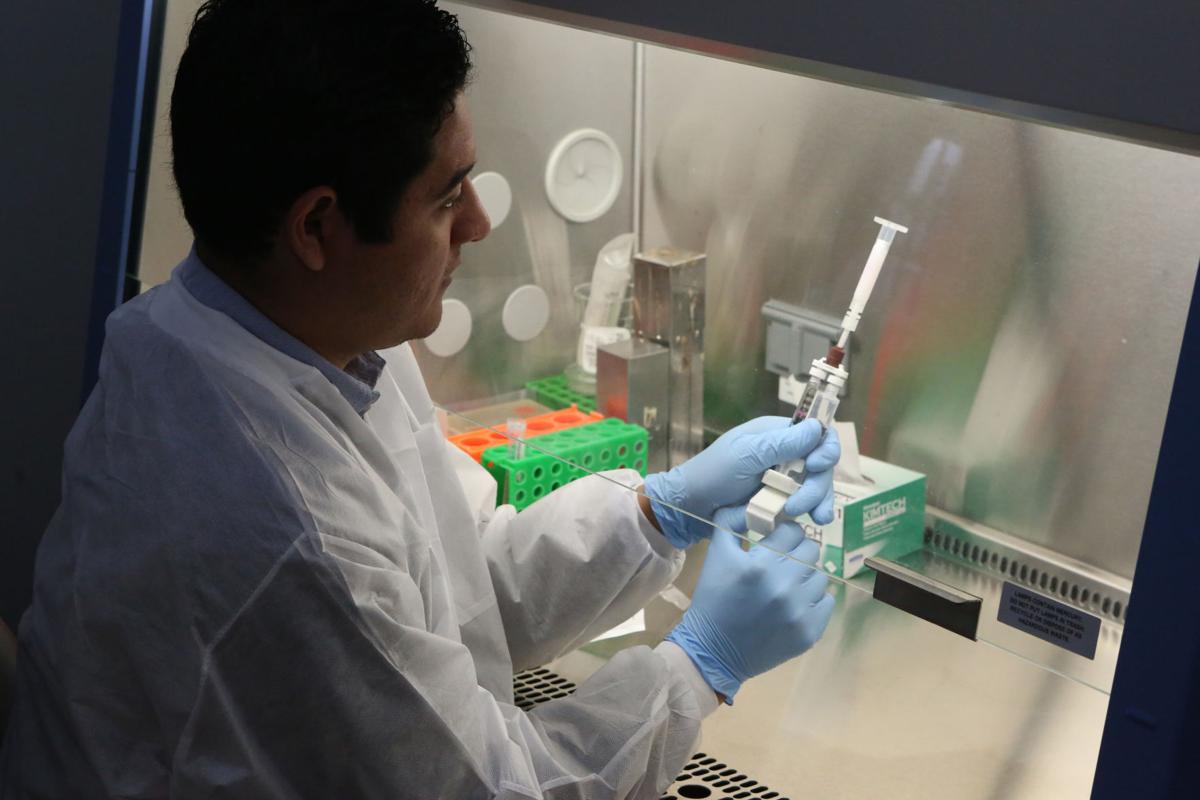 Hector Martinez. Cellink’s chief science officer, shows researchers how to mix bioink components. Special gel-like inks developed by the company are mixed with human cells before being placed in the 3-D bioprinter to form tissue samples for research. 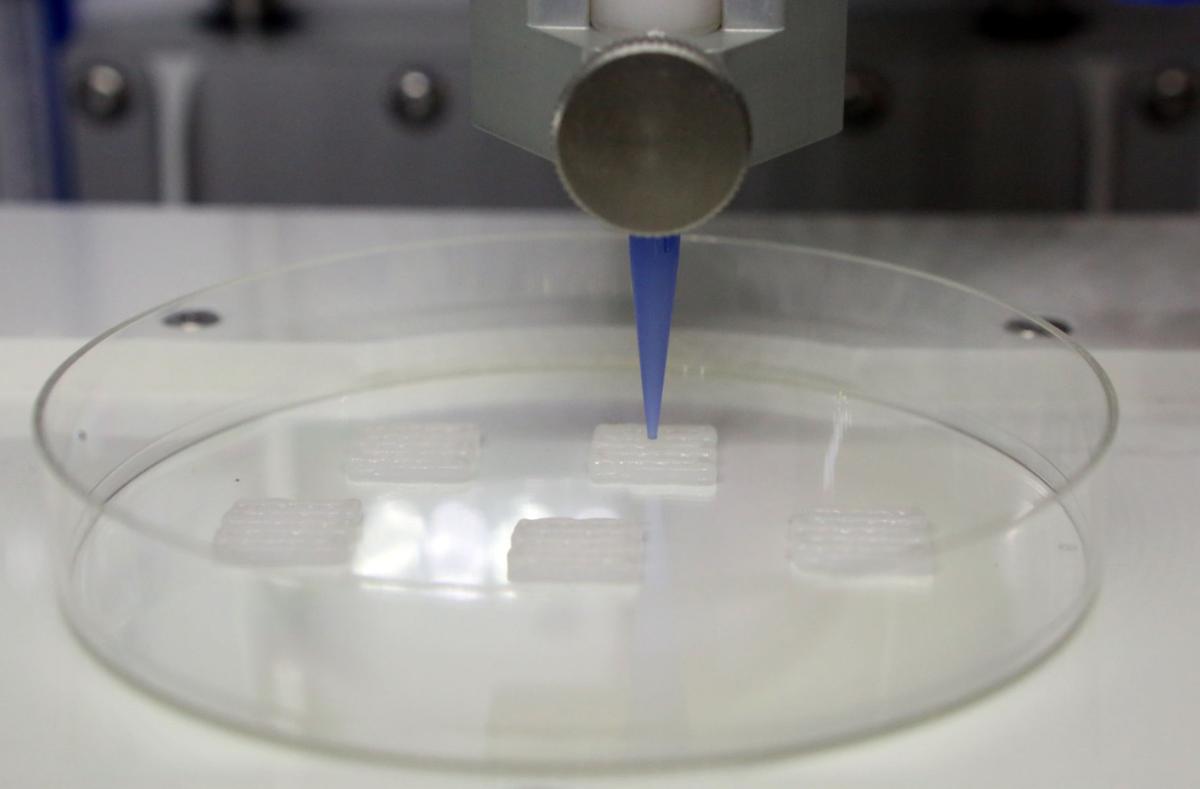 In just more than a year, Cellink has installed hundreds of printers in labs in 30 countries. The company’s basic printers sell for $20,000 but are offered half off to universities. 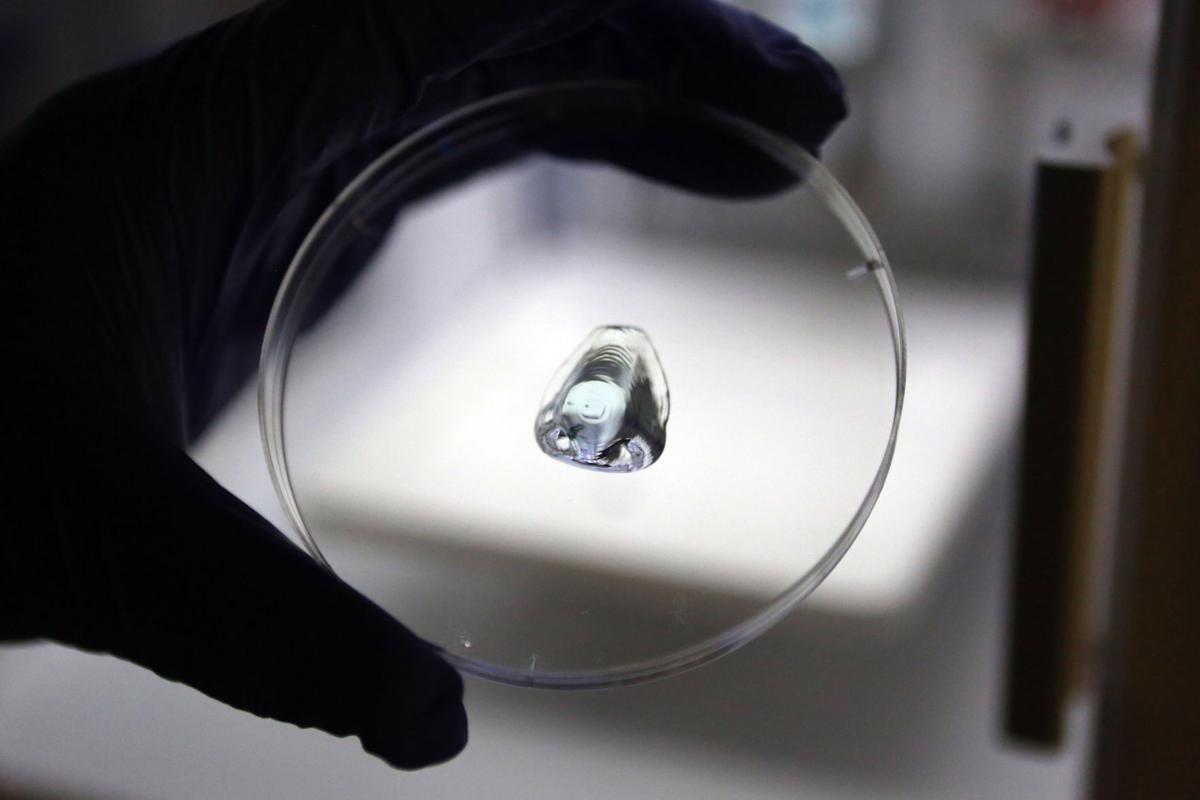 A Cellink bioprinter can build 3-D samples such as this nose. Without a printer, researchers have to build basic 3-D models with molds.

Erik Gatenholm and Hector Martinez are the Henry Fords of the 3-D biotech printer business.

Until Ford came along with his Model T, automobiles were too sophisticated and too expensive for all but the elite.

The co-founders of Cellink saw the same thing happening with 3-D biotech printers. Few could afford high-precision printers with six-figure stickers. For many labs, the choice was between the Rolls-Royce of printers or the horse-and-buggy days of casting simple three-dimensional tissue samples with molds to conduct medical experiments.

“It still does the purpose. Still gets you from A to B,” CEO Gatenholm said. “If you’re a student driver at 16 or 17, do you really need all that is on a Rolls-Royce? No. They need a pedal, a gear to shift, a seat and wheel to get them where they’re going.”

Cellink launched its line of printers slightly more than a year ago from offices in Blacksburg and Sweden. The company had preorders lined up before its launch and now has installed them in hundreds of labs in 30 countries, including Gatenholm’s alma mater, Virginia Tech.

“It’s been insane,” he said of the demand. “We’re now starting to see customers publish work with this equipment, and it’s amazing. I couldn’t imagine a year ago that we’d be there.”

On a recent Friday morning, Martinez, the company’s chief science officer, and Gatenholm, along with a few other representatives of Cellink, were in Tech professor Scott Verbridge’s Laboratory of Integrated Tumor Ecology. They were installing the printer and teaching researchers how to use it.

The cube-like printer is about the size of a table-top microwave and has the slick white finish of an iPhone.

Though it’s considered a basic bioprinter, what it does is rather sophisticated. Scientists select the type of tissue they want to study and mix those types of cells — such as collagen for skin — with a goo-like medium called bioink and then program the printer to make a particular body part, such as a nose.

A window allows viewers to watch as ink jets move with precision, squeezing out the mixture and building layers of tissue in a petri dish. When it’s done, the dish contains a little transparent nose with nasal cavities.

Without a 3-D printer, scientists would first need to cast a mold and then use it to build a structure.

“It gets complicated when trying to make a complex gradient,” said Patrick Thayer, Cellink’s chief bioink officer. “A lot of tissue is not just one cell type. It’s four of five. Using the printer, you can put the material where you want it much easier.”

Verbridge’s lab studies cancer in its environment. Researchers look at the relationship between tumors and surrounding tissues to determine what prompts or retards the tumor’s growth and how bacteria interacts with the relationship.

Until now, they had been building simple tissue samples by using molds.

The 3-D printer “is a nice in-between of the really simple cultures and the animal model that is very complicated and hard to control,” Verbridge said.

The idea for building a printer came when Gatenholm and Martinez were graduate students in Sweden.

Martinez, a mechanical engineer, was intrigued by tissue engineering applications in medicine and by the work that Erik’s father, Paul Gatenholm, was doing. He is a professor of biomaterial engineering at Chalmers University of Technology and at Virginia Tech. Martinez became one of his doctoral students.

Meanwhile, Erik Gatenholm had enrolled in the University of Gothenburg to pursue a master’s degree in business, economics and law.

He said his father introduced him to Martinez.

“We had the same passion and interest in 3-D printing,” Gatenholm said. “Hector had this really cool gel.”

The gel, or bioink, is a medium that binds with human cells to form the new tissue. Different media are needed to form different tissue types. Some experiments are done on just one type of cell found in a particular tissue; other research requires more types of cells that add to the complexity.

Martinez was developing a versatile bioink that he and Gatenholm teamed up to commercialize. Then they expanded their business vision to capture a larger market.

“From the business process, we realized it’s cool to sell ink, and universities are buying it. But the printers are so expensive,” Gatenholm said. “So if we could make a fairly cost-effective printer, we could sell it to everyone, and that would make our business grow. Then we realized this is a great industry.”

Gatenholm said most bioprinters cost about $150,000. They decided to build one that could sell for $20,000 and offer half off to universities.

They could sell the printer and the ink, educate researchers on how to use it and collaborate with them to create new lines of ink and more sophisticated, inexpensive printers.

At night, they worked on their prototype by using pieces of an old 3-D printer and syringes.

Word spread about their plans, Gatenholm said, and orders were placed with half-down deposits that helped to launch the product.

“By the time we had it started, we already had customers,” he said.

Cellink is now in 30 countries.

The printers are built in Sweden, but Gatenholm said they hope soon to make arrangements with suppliers in order to manufacture them in Blacksburg as well.

Cellink has grown to 23 employees since its start in January 2016. The company has raised $4 million through sales and investors and is showing a profit, he said.

“What we’re really looking for is talent,” he said. “We need biomedical engineers and mechanical engineers.” And Blacksburg is where he said he’s hoping to find them.

Cellink is also beginning to build and sell more sophisticated printers to keep up with demand as the science develops.

“We start simple and increase our knowledge base and jump to the next step,” Martinez said. Someday, he expects the science and engineering to advance to be able to print replacement tissues.

“I started working with the field in tissue engineering, trying to imitate our body. I see our body as a perfect machine,” he said. “We just have to hack it.”

What you should ask if retirement is just around the corner

What you should ask if retirement is just around the corner

The most important things about building credit

The most important things about building credit

The plan could flood the market with additional shares and dilute the stock, making it more expensive for a buyer to acquire a controlling stake.

5 Crypto Investments That Could Steal the Spotlight from Shiba Inu, According to Experts

Most of the cryptos actually have use (unlike meme coins).

Names and changes: Business recognitions and promotions for the week of Nov. 21, 2021

Cyber Monday sales are spread over three days at Amazon.

The newsroom, advertising and circulation departments will continue to publish and operate virtually while the new leased space is being prepared.

How to be a savvy shopper amid Cyber Monday hype

Besides recognizing FOMO, here are other ways to be a savvy shopper on Cyber Monday, which is the Monday after Thanksgiving. Also, check out more of the week's best money tips from experts.

How to get your finances in order for the Great Resignation

Here’s a checklist for shoring up your finances before quitting your job. Also, check out more of the week's best financial reads from experts.

As of this week, I bonds are paying out 7%, the second highest rate in their history.

Hector Martinez. Cellink’s chief science officer, shows researchers how to mix bioink components. Special gel-like inks developed by the company are mixed with human cells before being placed in the 3-D bioprinter to form tissue samples for research.

In just more than a year, Cellink has installed hundreds of printers in labs in 30 countries. The company’s basic printers sell for $20,000 but are offered half off to universities.

A Cellink bioprinter can build 3-D samples such as this nose. Without a printer, researchers have to build basic 3-D models with molds. 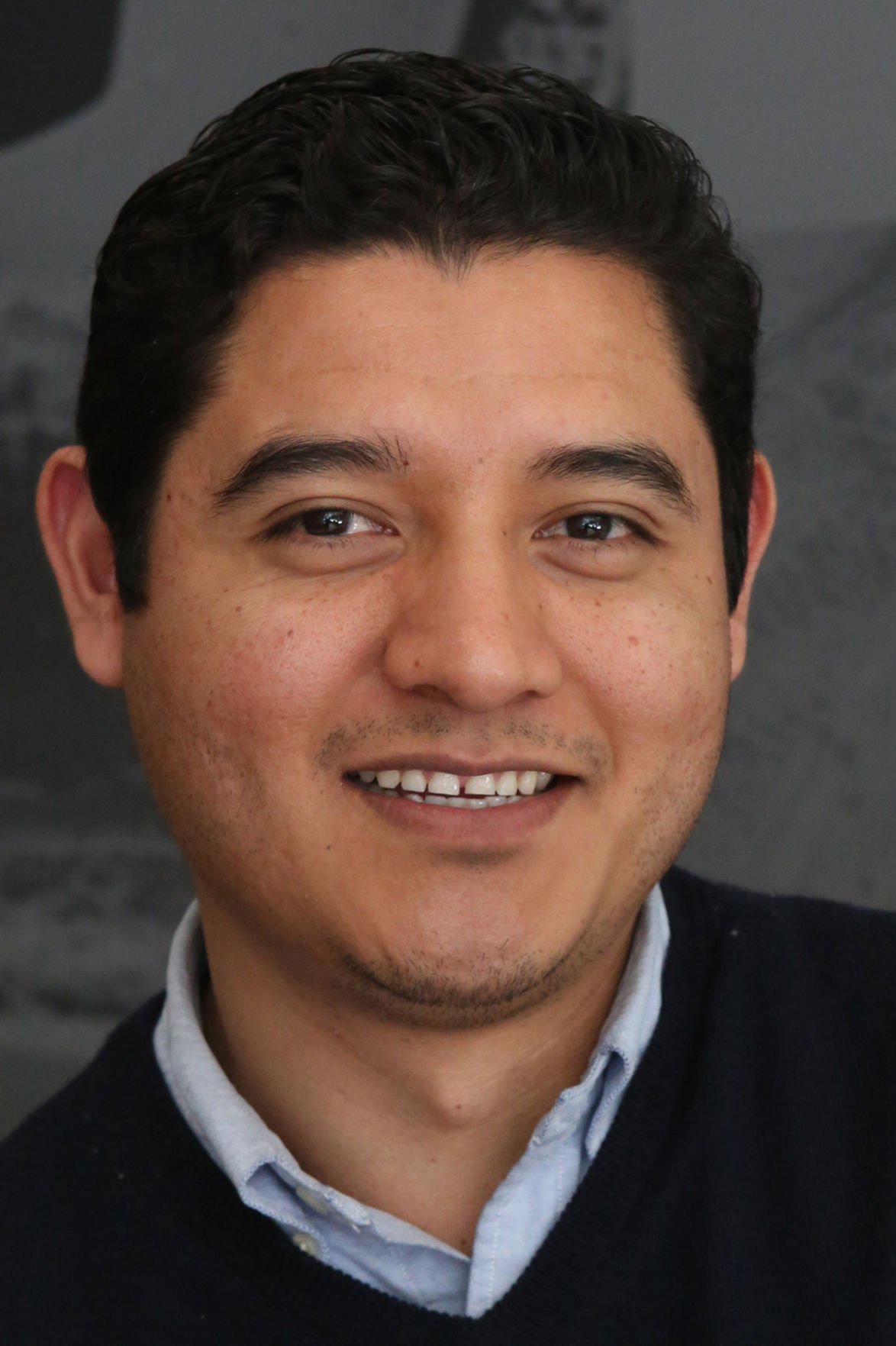 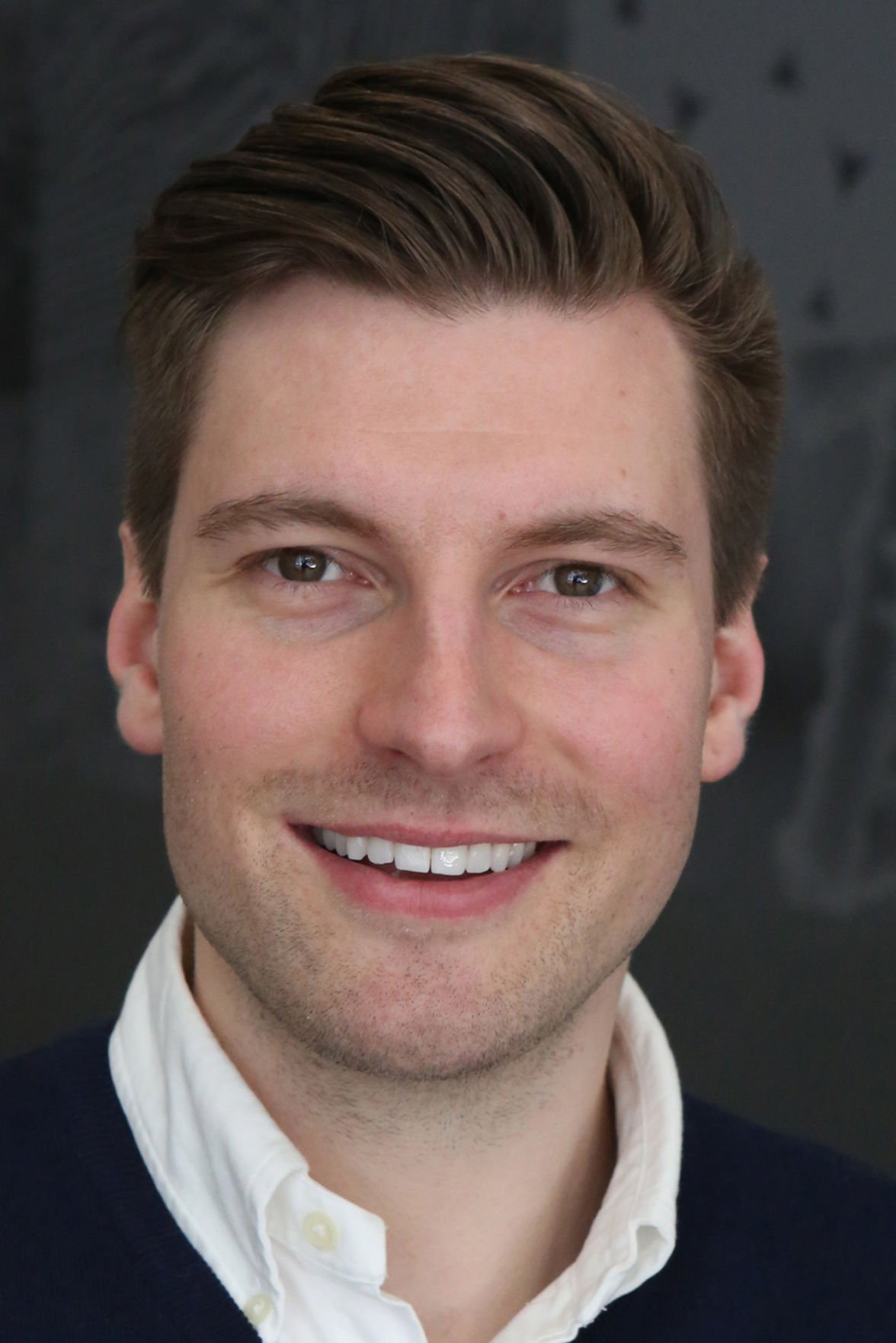