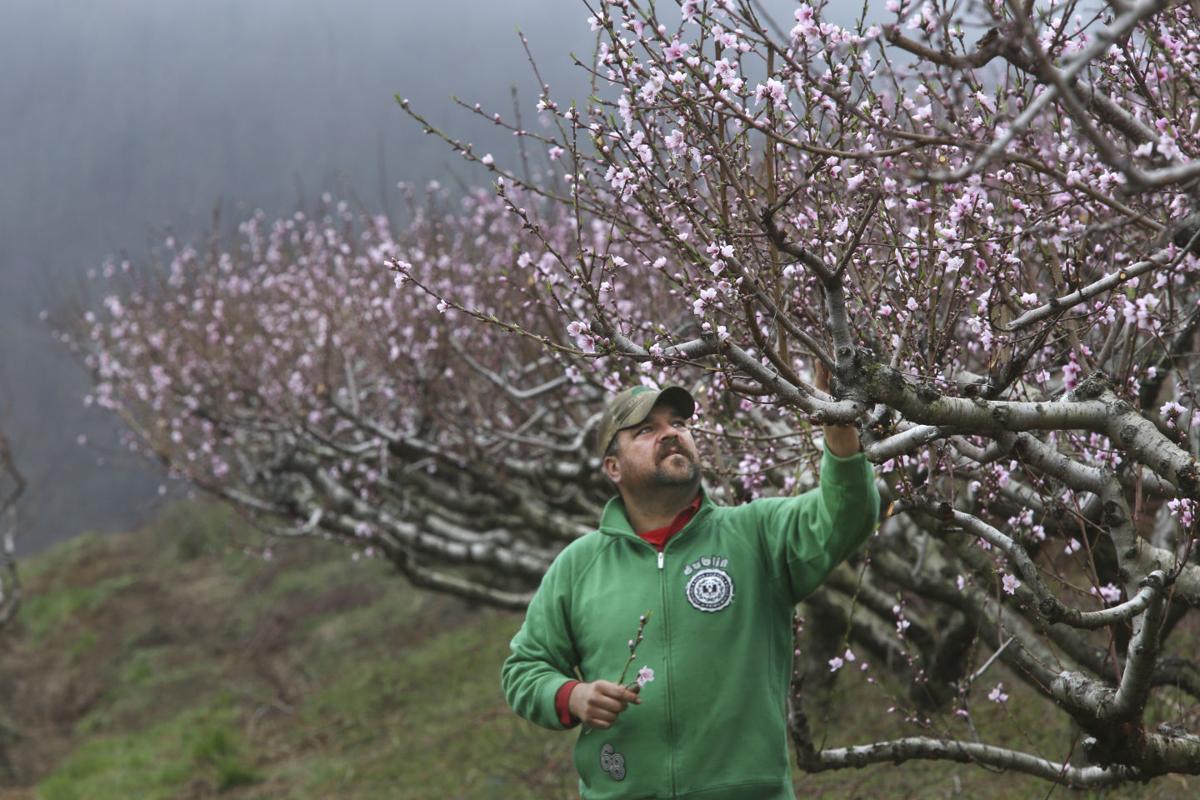 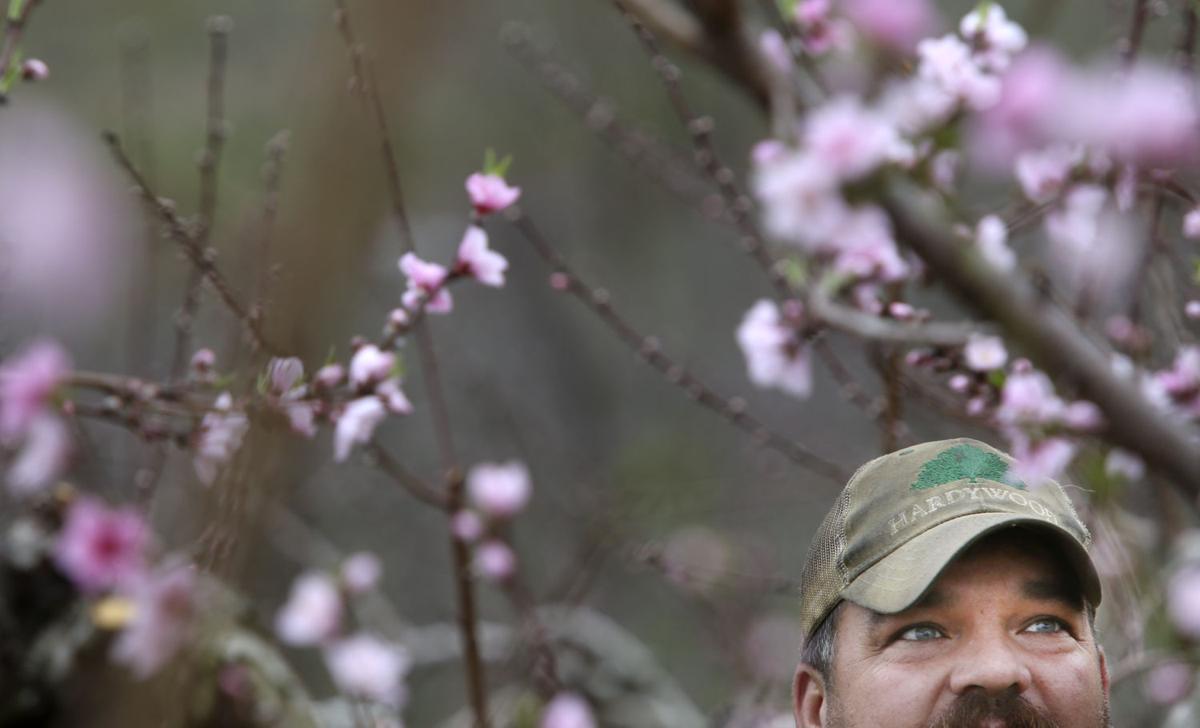 The unusually warm March has peaches and other orchard crops blooming early. Mark Woods, whose family has an orchard in Franklin County, keeps a positive attitude and says they will deal with what the weather brings. 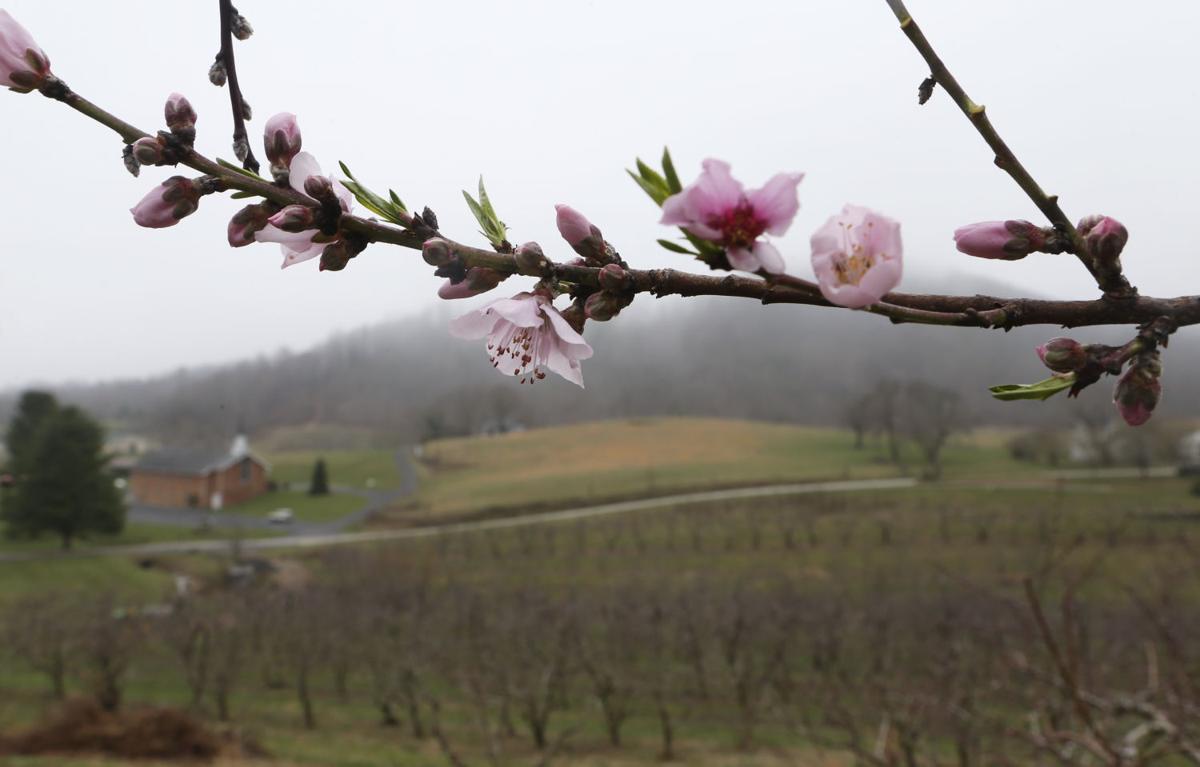 Blossoms on peach trees at Woods Farm have come out early due to warm weather. The blossoms that remain tightly closed protect the forming peach, which may then survive a frost. 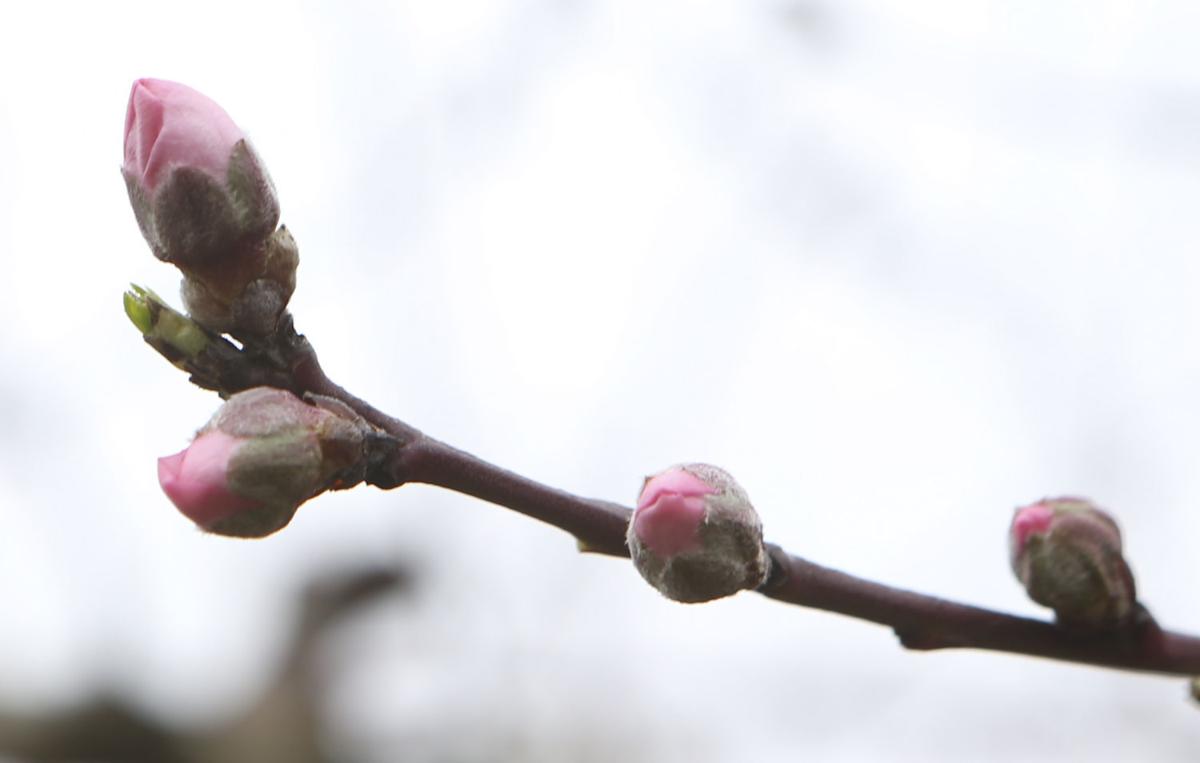 Peach blossoms that remain tightly closed could protect the forming peaches, which could then survive a frost. 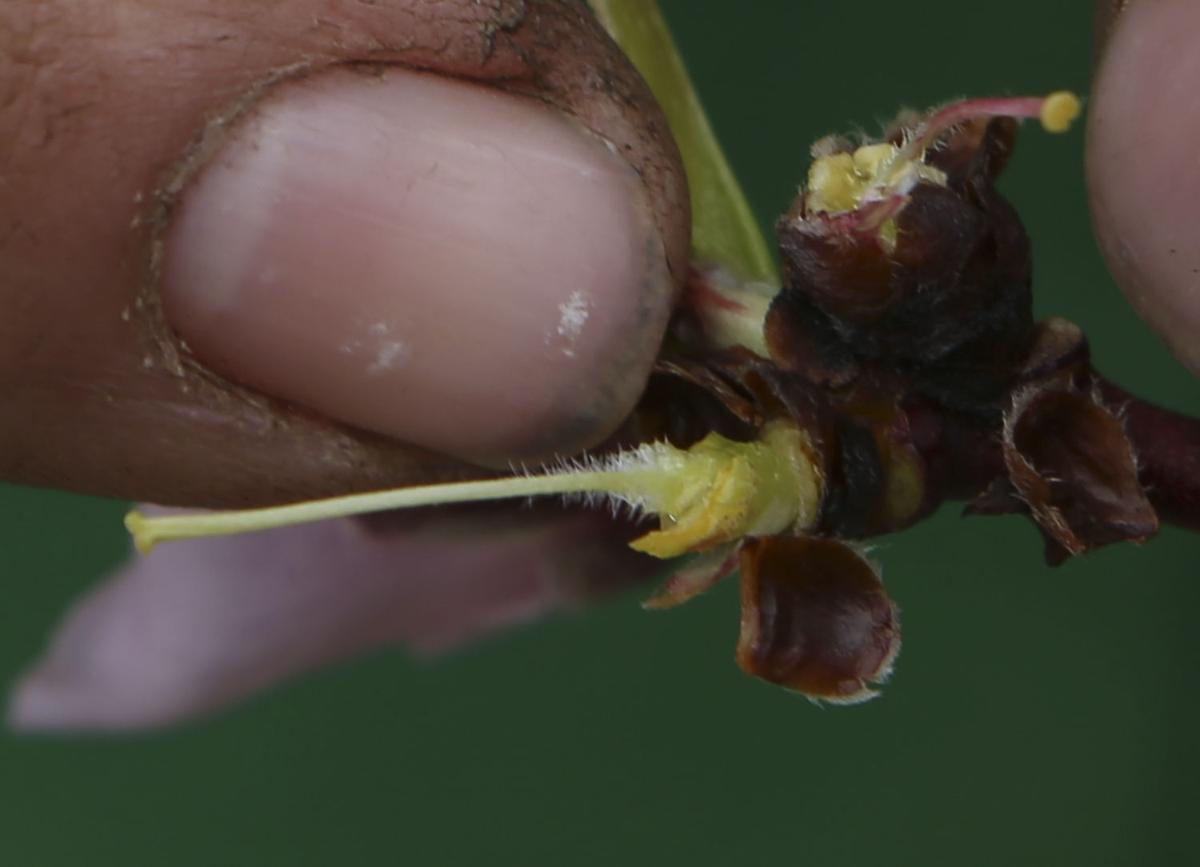 Mark Woods points to a peach forming inside a blossom. 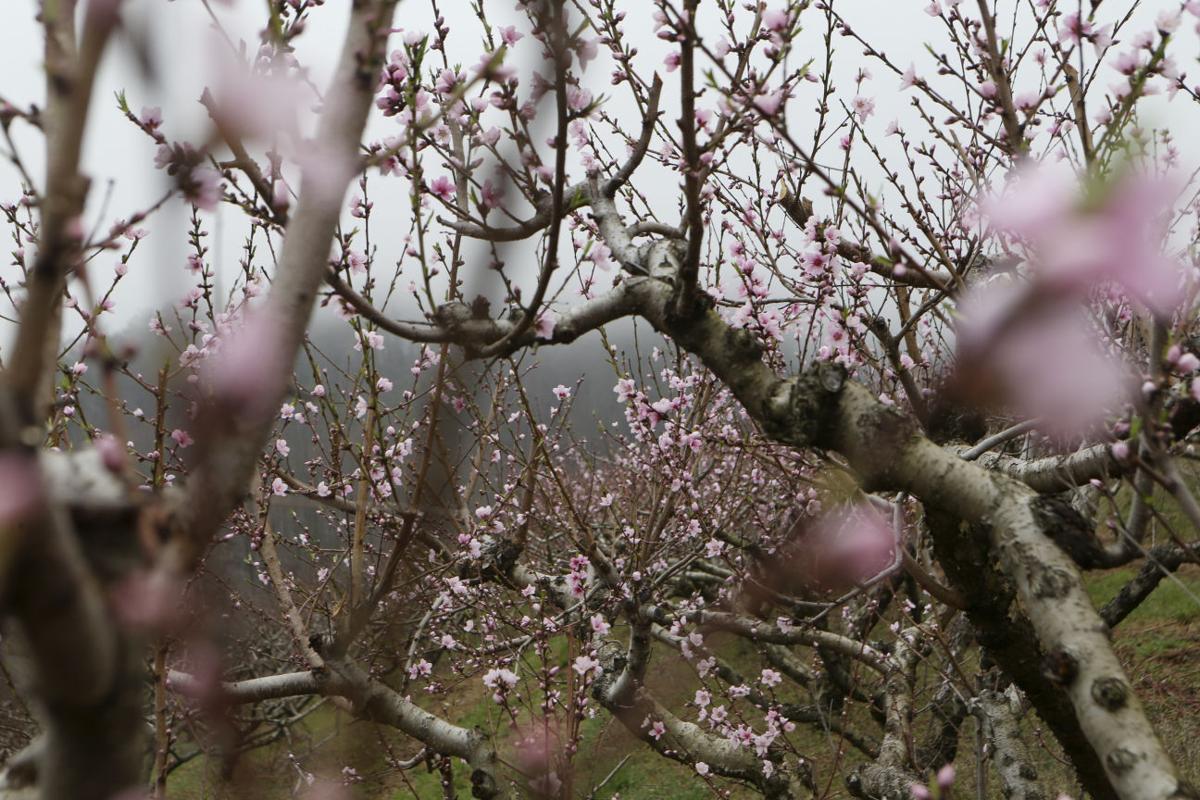 Some peach trees at Woods Farms in Boones Mill have almost fully bloomed.

On a damp, overcast March day, the smattering of white and pink easily stands apart from the rest of the trees at Woods Farms in Boones Mill. Most of the orchard’s trees are bare, which is typical for this time of year. But on the hillside, trees show signs of spring, with blossoms adding some color to the place.

Co-owner Mark Woods yanks down one of the petal-filled branches and delicately opens up one of the flowers.

“Every bloom will be a peach,” he said.

There inside was a nearly microscopic peach. It’s a tad early for peaches at most area orchards, but an early bout of warm weather is kicking off an early growing season.

After weeks of temperatures in the 70s, March has been averaging weather more normal for May than the end of winter. The unseasonable warmth can make certain crops vulnerable, especially peaches, berries, plums, nectarines and, to a lesser extent, apples.

“The real worry is peach crops,” she said.

Unlike apples, which take longer to sprout and generally can withstand some tougher weather, peaches are particularly vulnerable. They need less time to grow. Once the temperature gets above 60 degrees for several weeks, peach trees begin to blossom. This is normal. However, if cold weather returns or there’s a bad frost, it could kill the growing buds.

Will a cold front hit southwest Virginia by the end of March or April? It’s highly possible. In fact, overnight lows Sunday and Monday are projected to be at or below freezing across the region.

Last year, late freezes were responsible for a 20 percent to 30 percent loss in peach crops in southwest Virginia. Woods said he is on “pins and needles” until late April, when the warm weather is likely to stay. Woods Farms has about 40 acres of apples and about 40 acres of peaches. He’s more concerned for the peaches, which make up a chunk of the farm’s inventory.

Other fruits, such as plums and nectarines, are similarly susceptible to the weather, but far fewer of them are grown in the area than peaches.

There isn’t much orchard owners can do to save crops from a frost.

“We are at the mercy of the weather,” said Loretta Ikenberry of Ikenberry Orchards in Boutetourt County.

She said she hadn’t seen any of her peaches blossoming as of last week, but if the warm weather sticks around much longer that will change.

“Once it starts, that’s all you can do,” she said.

In Virginia, fruit makes up a small portion of the overall agriculture industry when compared to crops such as soybeans or tobacco. Yet Virginia was still the nation’s seventh largest apple producer in 2015, according to Virginia Department of Agriculture spokeswoman Elaine Lidholm.

According to data from the U.S. Department of Agriculture, Virginia produced 210 million pounds of apples and more than 12 million pounds of peaches. Lidholm said the bulk of the fruit crops are grown around Charlottesville or Northern Virginia, but there are small orchards throughout the state.

This is the the time of year that orchard growers get nervous.

“I think this year is particularly iffy,” she said, because of the unusual weather patterns.

“I would say it’s a trend. We’ve been in business about 20 years. The weather is getting more unstable,” she said.

One week everything is fine, but next week could put growers in tears. That kind of instability has hurt business before.

Weaver said she had to cancel a Community Supported Agriculture program in 2007 because she was unable to find enough fruit. Mark Woods said several years ago, a freeze hurt his crop so badly, he could fit his entire crop of peaches into a small box.

A shortage in locally grown fruits could lead to some price increases for area farmers markets. Last year, the Southwest Virginia Farmers market in Carroll County showed a price increase of almost 20 percent on some produce. Larger grocers, such as Kroger or Fresh Market, didn’t see as much of an increase because much of their inventory comes from other regions, and they’re most affected if there is a national crop shortage.

Because the weather is different everywhere, a cold front or warm front likely won’t affect every orchard the same, even if they are close to each other. While Woods Farms had a loss last year from the frost, Jamison’s Orchards, less than 10 miles away, had a very good crop.

“Change is the name of the game,” Weaver said. “Instability is everywhere. A dubious outcome is certain.”

Years of experience can be helpful.

Gross’ Orchards in Bedford County has been growing for five generations in the Apple Valley. Ronnie Gross said the peaches are blooming about two weeks early, but this has happened before.

The warm weather is showing that the crop should be good, volume-wise, he said, and his farm is on a good site with a lot of wind that he hopes will prevent a frost.

AmRhein’s Bridals, which has served the Roanoke Valley since 1992, has closed.

The GE Power facility at 1501 Roanoke Blvd., which opened in the mid-1950s, has been for sale for about two weeks.

Roanoke's leadership has been discussing bag taxation but this week set the process in motion. The Roanoke City Council on Monday scheduled a public hearing for 7 p.m. April 19.

Also, more money tips from experts at NerdWallet, Forbes and the Motley-Fool.

'She-cession': The pandemic has hit women in the workforce hard. Here how some are coping

Working women have been severely affected by the COVID-19 pandemic, with a staggering number leaving the work force or dramatically scaling back from their jobs. Experts say women have borne the brunt of the upheaval for two main reasons: devastation to industries employing a high concentration of women, and the additional childcare duties created by the closure of schools and daycare facilities.

Tom Farrell dies at 66, the day after stepping down as leader of Dominion Energy

Thomas F. Farrell II, a lawyer who rose to the top of Dominion Energy to dominate Virginia business and politics, has been praised for his civic involvement but also criticized for his substantial influence on state politicians and the effects of his business initiatives on the environment.

The unusually warm March has peaches and other orchard crops blooming early. Mark Woods, whose family has an orchard in Franklin County, keeps a positive attitude and says they will deal with what the weather brings.

Blossoms on peach trees at Woods Farm have come out early due to warm weather. The blossoms that remain tightly closed protect the forming peach, which may then survive a frost.

Peach blossoms that remain tightly closed could protect the forming peaches, which could then survive a frost.

Mark Woods points to a peach forming inside a blossom.

Some peach trees at Woods Farms in Boones Mill have almost fully bloomed.