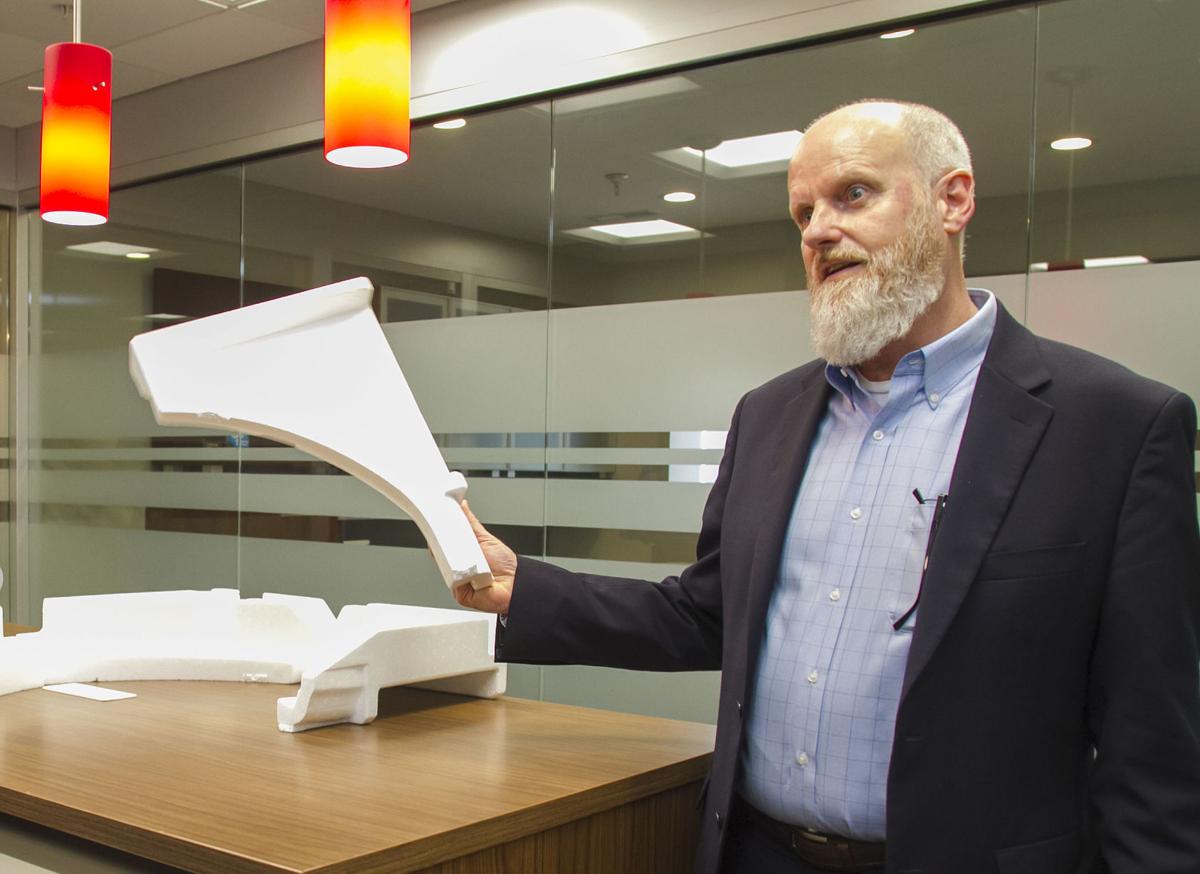 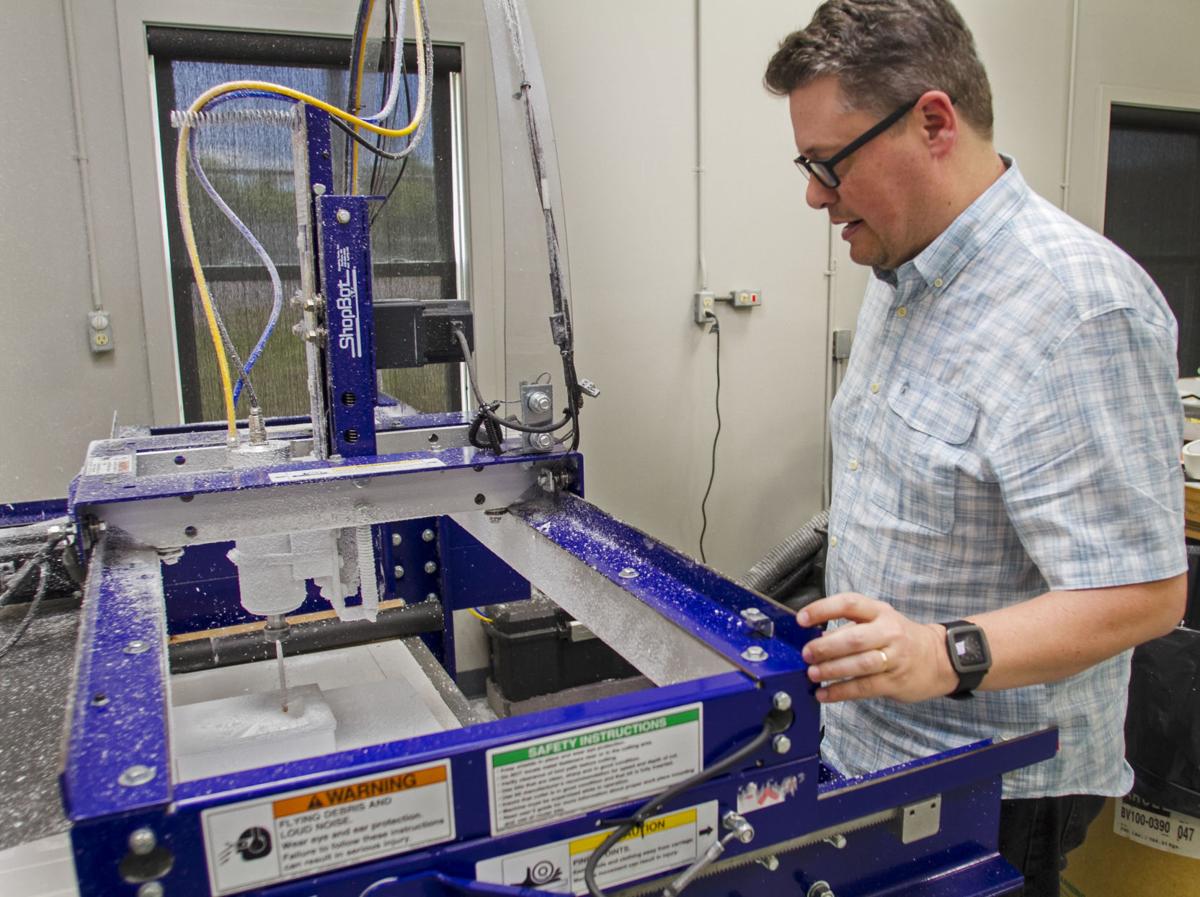 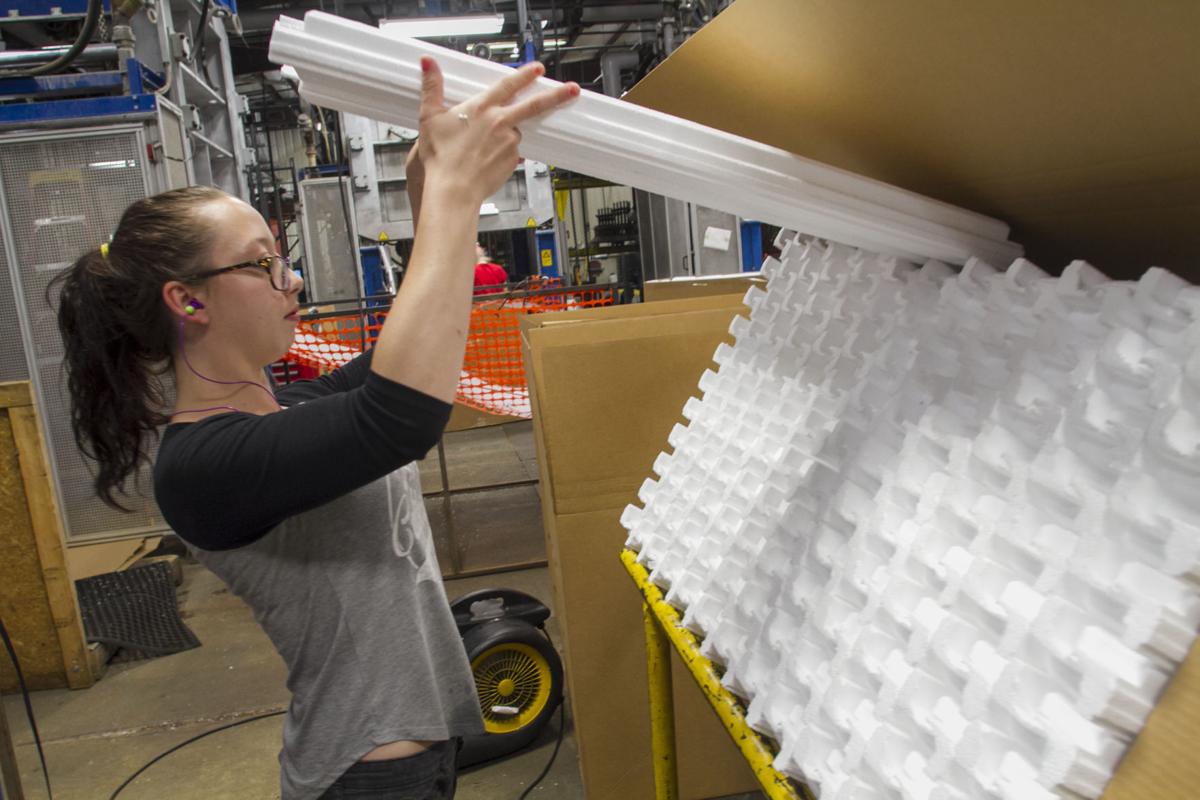 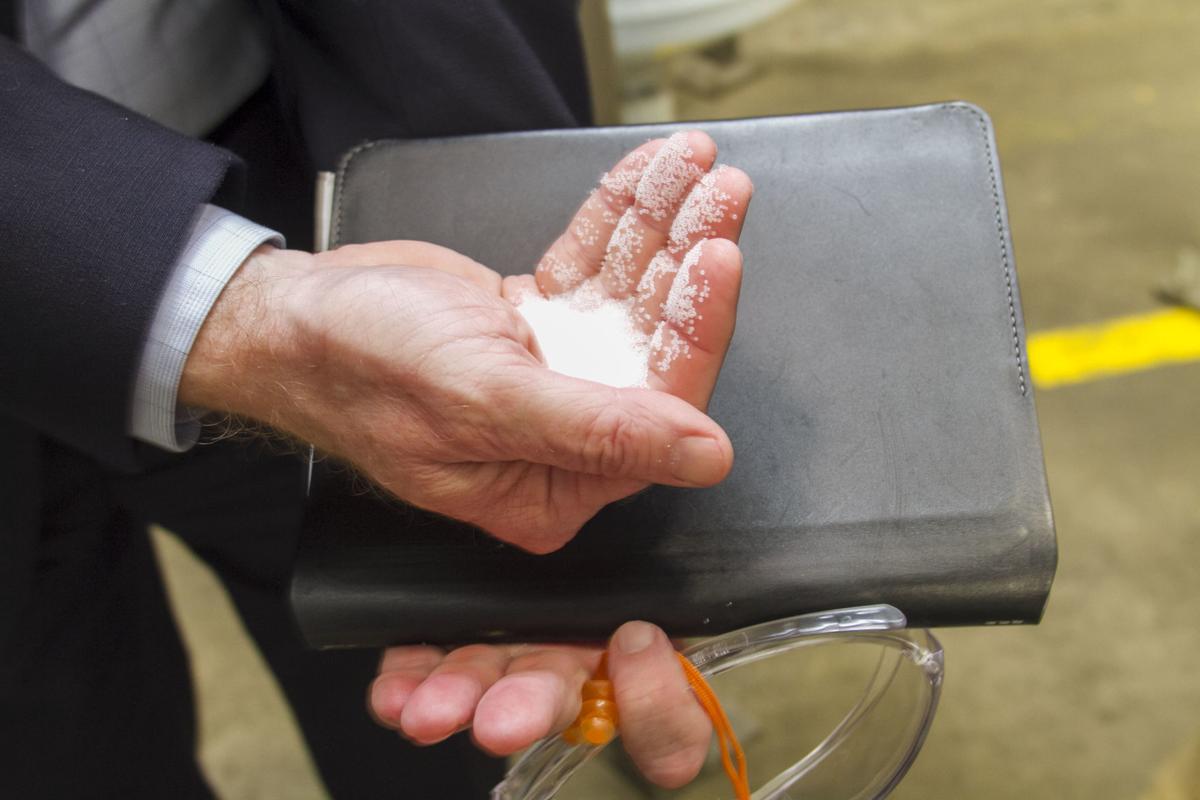 A close-up of the material that used to make components and prototypes at the RADVA Corp. plant. 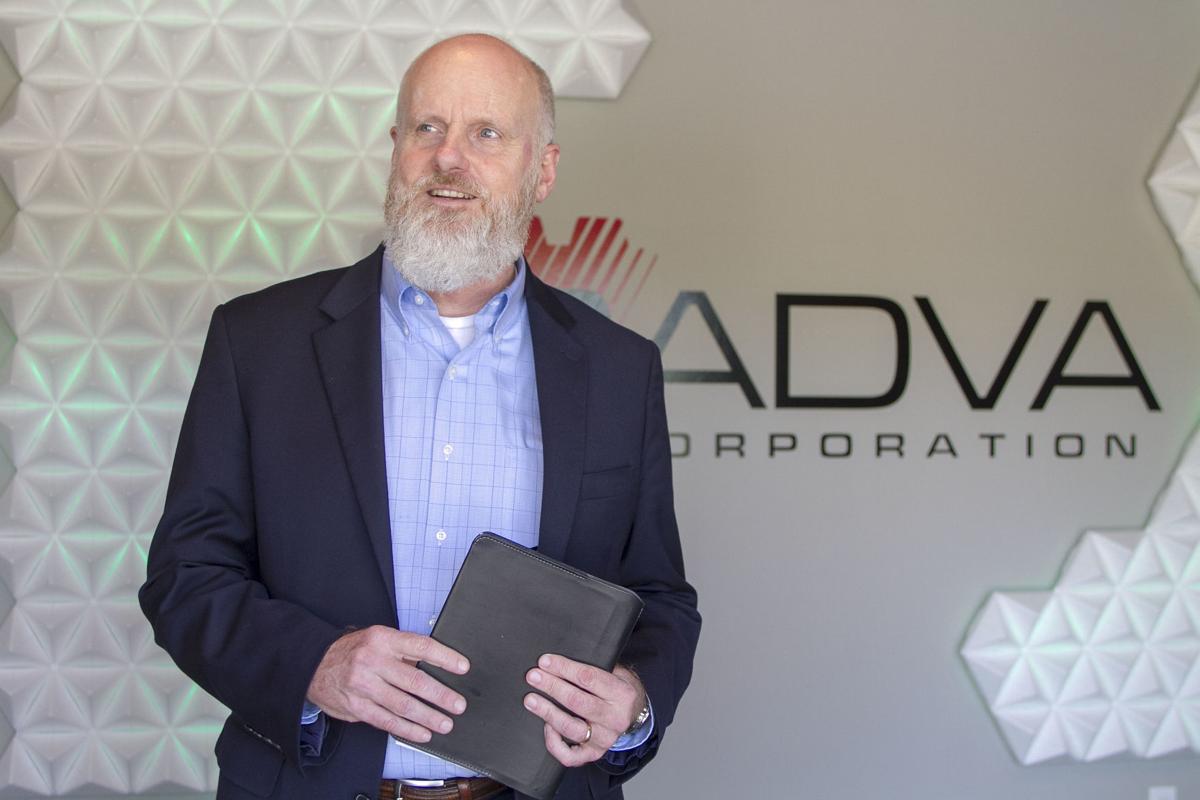 RADVA Corporation CEO Stephen Dickens announced last week that he has sold the company his father founded more than 50 years ago for $17.5 million. The buyer, Huntington Solutions, plans to keep the Radford production facility and employees in place, but Dickens will leave the company where he earned his first paycheck cleaning floors when he was 13 years old. Dickens’ father and RADVA founder, Luther Dickens, died in October 2018. 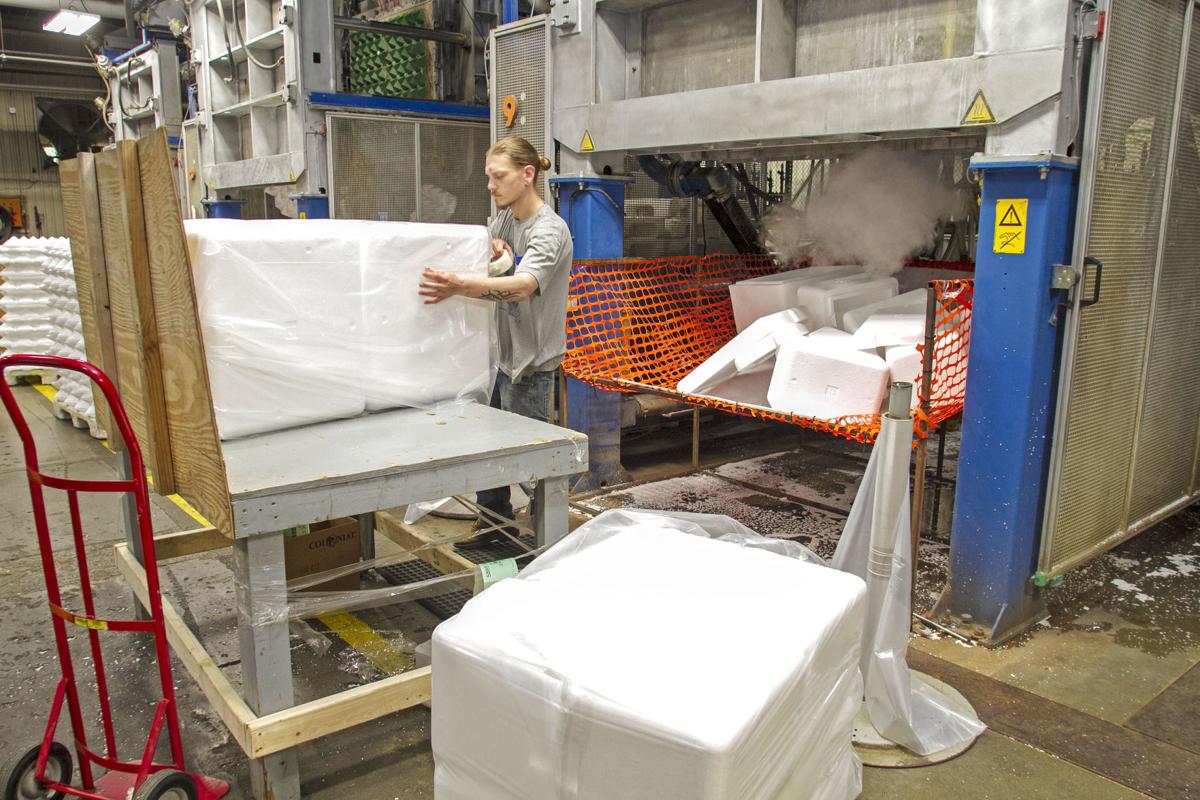 Anthony Worrell gets products ready for shipping at RADVA Corporation.

RADFORD — One of the city’s longest-running manufacturers was acquired this month in a deal valued at $17.5 million, or 1.75 billion pennies — to put it in terms in which RADVA Corp. more often deals.

The business specializes in the expandable plastics used in packaging and associated with the Styrofoam trade name. It works with brands like Canon and Hewlett-Packard, selling many products for less than 10 cents each.

During a recent visit, one of RADVA’s two-story machines hissed every few seconds and spit out a handful of insulated foam containers for shipping urinalysis test kits. Another made pyramid-shaped foam bumpers that protect the corners of boxes, while a third made irregular pieces that fit around printers.

“There’s not a lot of pennies left to make a profit — but we do,” longtime CEO Stephen Dickens said on a tour during one of his last days on the job.

He is leaving the family business after the sale to South Carolina-based Huntington Solutions, a larger competitor with six production facilities across the U.S.

Dickens will consult for the company through the end of the year, but he says his employees will keep their jobs. Huntington has expressed interest in maintaining RADVA’s headcount and geographic footprint.

The sale is good news, said Basil Edwards, the city of Radford’s director of operations. RADVA has become a mainstay in the business community, maintaining local ownership for five decades at a time when that’s not common.

And now Edwards says Huntington will benefit from the investments the Dickenses made over the years.

“They’ve always been a good employer here in the city and a good community citizen,” Edwards said. “They’re entrenched in the community.”

RADVA was co-founded in part by Stephen Dickens’ father, Luther Dickens, in 1962.

Luther Dickens was an engineer at the Radford Army Ammunition Plant when he and a couple of co-workers developed a plastic packaging wrap. It became the basis for their startup, RADVA.

The elder Dickens was an idea man, constantly inventing products under the RADVA brand from children’s toys to building materials. One of his first was Mr. Wobbly, a ball with an off-center weight that made it roll erratically.

Luther Dickens eventually had an idea for construction panels made of foam that could replace wood-frame construction. He took RADVA public in 1986 to help launch the product internationally.

Rick Naschold, a financial adviser on the transaction through Dominion Partners, said RADVA was always the core business and accounted for the vast majority of earnings.

Eventually, the company spun the building materials business off as a separate entity known as Therma-Steel Corp.

ThermaSteel struggled for profitability for years and eventually sold licensing rights around the world. The two businesses had no direct ties by the time the transaction went through, according to Naschold.

“I was left with the legacy of a small, publicly traded company, which is extremely difficult,” Stephen Dickens said.

But for every bit of a dreamer Luther Dickens may have been, his son is equal parts pragmatic businessman.

Stephen Dickens said he earned his first paycheck from RADVA when he was 13 years old, making $1.35 per hour sweeping floors. The stock price had fallen from dollars to pennies by the time he finished college and took over the operations of the family business.

The second-generation manager refocused the company on the protective packaging business. It’s not sexy building industrial parts that cost cents and that most customers hardly notice.

Large manufacturers, like Canon, contact RADVA before they launch new products. RADVA designs and manufacturers foam shapes that are either used in shipment or built into the body of the product itself. Some are one-time runs in the range of hundreds of pieces. Others will be on the assembly line for years with counts above 20 million pieces.

The margins have always been razor thin, so Stephen Dickens is an efficiency aficionado.

When the economy took a dive around 2008, he cut employment by two-thirds and began investing heavily in automation.

“Where I had 120 people before, I do more volume with 60 people [today] based on investing in technology,” Stephen Dickens said.

He sees opportunities for more automation, which could cut costs further and keep the business alive off even slimmer margins.

For a long time, Dickens said RADVA stock has essentially been paper with little value. As recently as 2012, the company was valued below 10 cents per share.

When the company was sold last month, it went for $17.5 million. That comes out to about $3 per share before transaction, legal and other costs are taken out.

“So those people who bought stock back in the ‘80s and couldn’t sell or realize anything from it — they’re going to make some money,” Dickens said.

Stephen Dickens said he has been approached about opportunities to sell the family business in the past, but he was never very interested.

Dickens is an avid cyclist and he said he was riding his bike about 30 mph down Radford’s Rock Road when he saw an SUV run a stop sign and pull out in front of him.

He tried to go to the ground, but there wasn’t enough time.

“I had to make some quick decisions or I wouldn’t be sitting here today,” Dickens said.

He ultimately spent 11 days in the hospital for injuries from the wreck. And then a bacterial infection from road rash extended his stay in the infectious disease unit of the hospital.

After more than 50 years, it finally felt like time to take a look at those buyout offers.

“When I got hit by a car, I rethought things — heavily,” Stephen Dickens said. “It was a life-changing experience.”

The acquisition process began in February 2018. Luther Dickens died in October, and the deal was approved by shareholders this month.

“I’m sorry he didn’t get to see today,” Stephen Dickens said of his father. “I think he would have been proud.”

A close-up of the material that used to make components and prototypes at the RADVA Corp. plant.

RADVA Corporation CEO Stephen Dickens announced last week that he has sold the company his father founded more than 50 years ago for $17.5 million. The buyer, Huntington Solutions, plans to keep the Radford production facility and employees in place, but Dickens will leave the company where he earned his first paycheck cleaning floors when he was 13 years old. Dickens’ father and RADVA founder, Luther Dickens, died in October 2018.

Anthony Worrell gets products ready for shipping at RADVA Corporation.