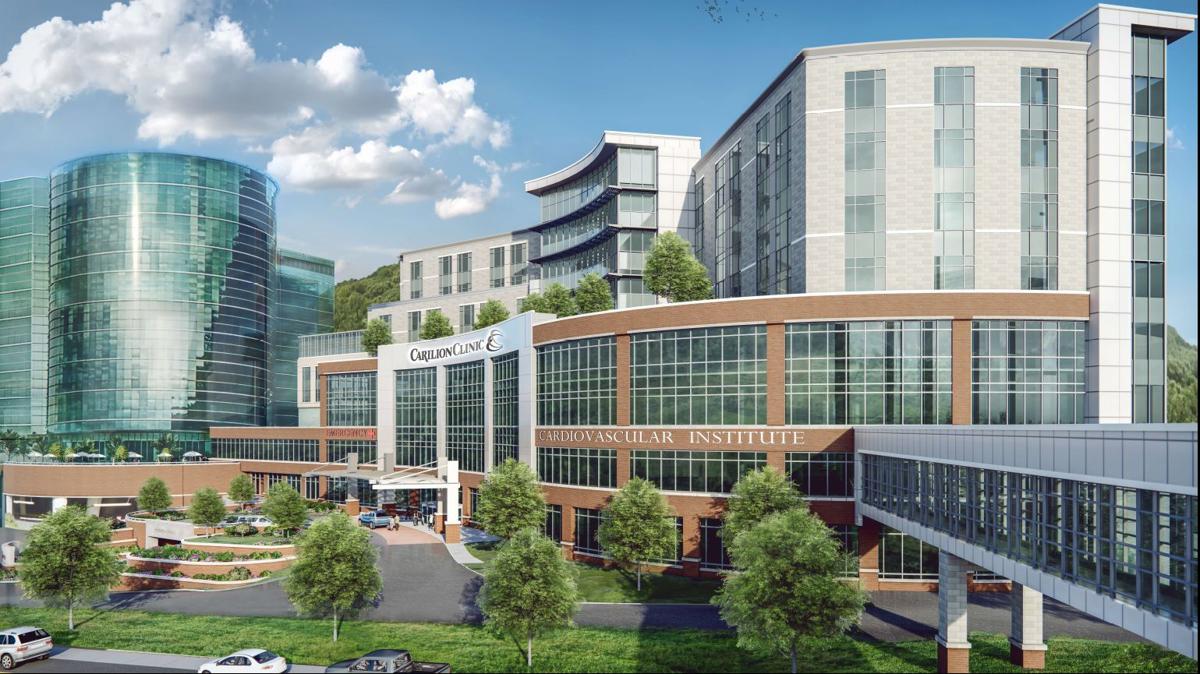 A rendering shows that an addition will be built just south of Carilion Roanoke Memorial Hospital on the site of the city’s former tennis courts. 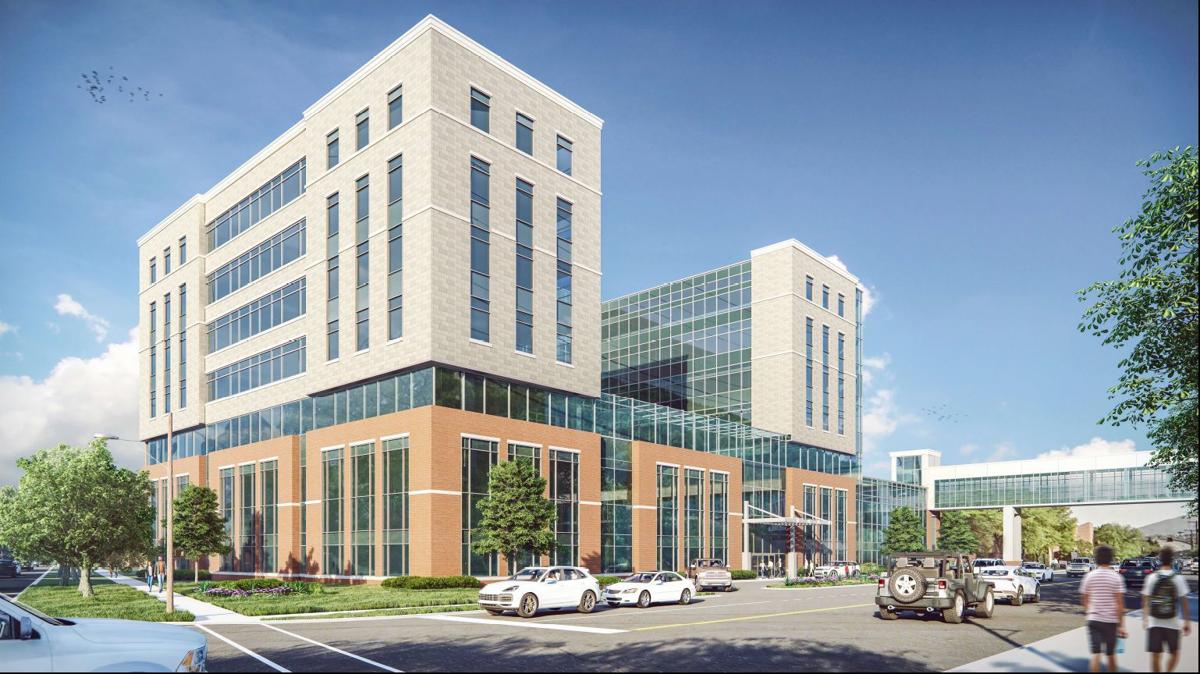 A rendering depicts a building that will be constructed for psychiatric care along Jefferson Street across from Carilion Roanoke Memorial Hospital. 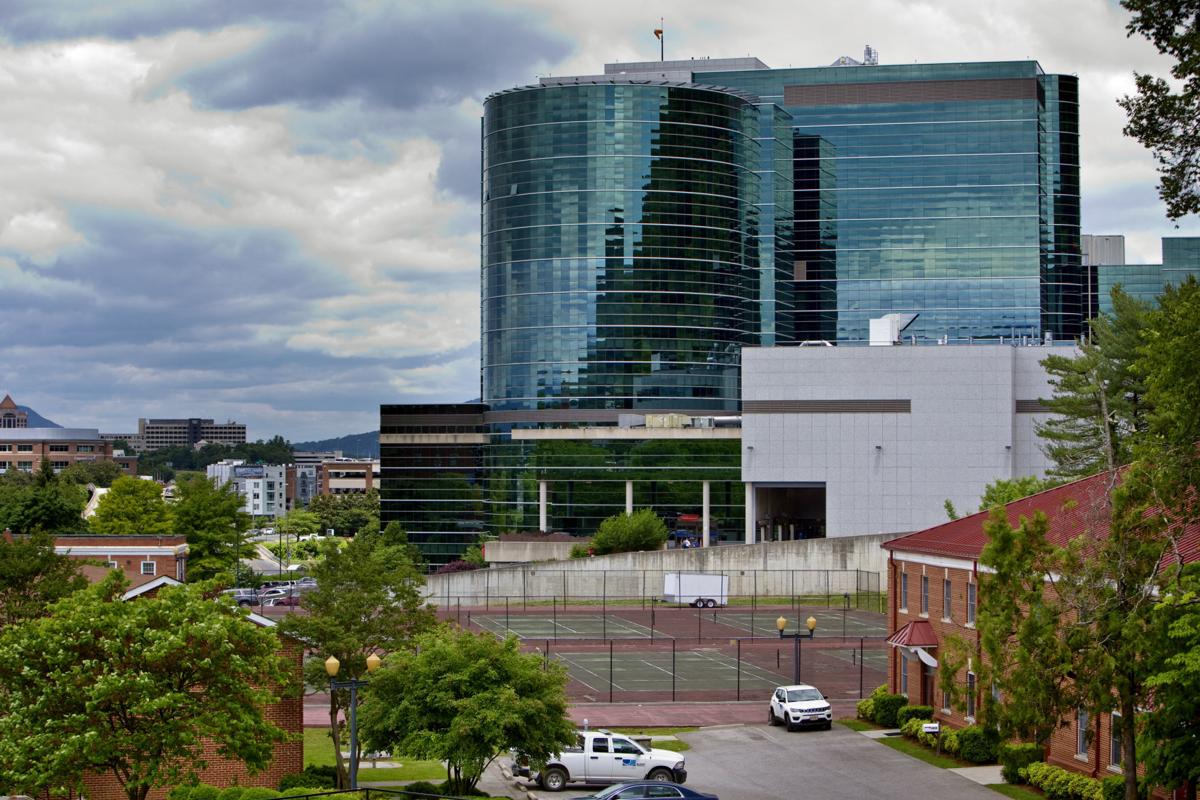 Carilion Clinic on Wednesday announced a $300 million expansion to Roanoke Memorial Hospital that includes a new tower to care for emergency and heart patients, a new behavioral health hospital across Jefferson Street and a parking garage and pedestrian skyway to connect it all.

The expansion that will rise on the former Crystal Spring tennis courts is part of Carilion’s plan to invest $1 billion over the next seven years on capital improvements, including $200 million to equip the new buildings.

“We talked for some time now about expansion and renovation. If we were to go through the hospital, it’s basically four primary buildings that have been pieced together,” said Steve Arner, chief operating officer for Carilion Clinic and president and CEO of Carilion Medical Center. “This gives us the opportunity to build on the Crystal Spring property. Some of it is replacement of aging facilities and to give us expansion capabilities like in the emergency department, and to co-locate things like the Cardiovascular Institute, which is now spread across the hospital.”

The plans were shared Sunday with Carilion’s boards and leadership. Arner, CEO Nancy Agee, Chief Financial Officer Don Halliwill and Chief Medical Officer Patrice Weiss discussed the plans during an interview in advance of the public announcement that was made Wednesday morning after Carilion employees were notified of the expansion.

The hospital addition, called Crystal Spring Tower, will be built just south of Roanoke Memorial on the site of the city’s former tennis courts. Plans call for two or three floors of underground parking that will be topped with six or seven floors of clinical space. The existing emergency room will expand into new space and have 95 beds.

All of Carilion’s cardiovascular procedures and patients, now scattered across the hospital, will be consolidated into the new tower. An additional 40-bed observational unit will be created for patients who are still being assessed to determine if they need to be admitted.

Details will be worked out during the coming months.

“What happens inside, what it will look like, that will take time,” Agee said. “We are relatively nimble but, on the other hand, we are ready, aim, aim, aim, fire. So when we pull the lever, we know what we are doing.”

A new building for psychiatric care that includes a separate emergency room for behavioral health patients will be built across Jefferson Street, where it will replace what is now referred to as the rehab building. Construction will begin with demolition of the rehab building’s auditorium. As the new behavioral health building is completed, the old one will be razed to make way for a 550-space parking garage between the new building and the cancer center.

The new psychiatric hospital will have an interior courtyard. Crystal Spring Tower will also have outdoor space, with a terrace running along the width of one of its upper stories. Another terrace will be added off Roanoke Memorial’s existing cafe in a way that helps to connect the towers.

“I think it’s really pretty. We tried to keep with the flavor architecturally but add more greenery and be more sensitive to the environment,” Agee said.

Carilion first talked about expansion in 2015, when it engaged in a land swap with Roanoke and the Western Virginia Water Authority that allowed it to acquire the tennis courts. During a rezoning hearing, it said the project would have a 15-story tower, with five of the floors for parking, that looked similar to the South Tower that was finished in 2007 and would include an emergency department expansion and an array of services.

Carilion met with neighbors then, and expects soon to share the new plans with them.

The project has changed in appearance and size but is designed to allow for future expansion, Agee said.

The type of services to be offered also changed. While expanding the emergency department remained a priority, so, too, did adding 40 observation beds that are now scattered across the hospital for patients who may need a few hours or few days of care. This type of care developed because of Medicare requirements.

The remainder of the building will be used for heart patients. Agee said Roanoke Memorial has become one of the largest centers in the country for a minimally invasive valve replacement surgery called TAVR, transcatheter aortic valve replacement.

“We’ve just done 800. Most centers are doing in the neighborhood of 50, so that’s a real distinction for us. We are not yesterday’s medical center,” she said.

Weiss said that by consolidating the cardiovascular services, additional beds will open in the existing towers. During the last few years, Carilion has been reworking space within Roanoke Memorial to deal with overcrowding. It spent $13 million on the emergency department to meet the demands of caring for 225 patients a day. The expansion will allow room to configure the department so it works more efficiently.

Carilion has been moving everything out of Roanoke Memorial that does not deal directly with patient care, including its chief administrators.

Halliwill said Carilion plans to spend $1 billion through 2026 on capital needs, and budgets about $100 million for routine projects.

“Part of our deliberative process the last several years was to ensure from a financial perspective to be in a position that we could fund this capital project and still meet our patients’ needs,” Halliwill said. “Our balance sheet is strong. We compare ourselves to our peers across the state and the country and we do really well to better than them in every category except age of plant.”

Last year, Standard and Poor’s upgraded Carilion’s rating and gave it a stable outlook. Last week, Moody’s did the same.

“We feel really good about our performance, and the rating agency is a validation of that,” he said.

Carilion has yet to decide whether it will borrow additional funds. Halliwill said Carilion is in the position to continue to invest in other projects.

“We’re not going to have to sacrifice other things we are doing,” he said.

Carilion in 2006 announced it would reorganize from a collection of hospitals and primary care practices into a clinic model with physician leadership that would offer specialty care. It also announced expansions, began to build its Riverside campus and embarked on a partnership with Virginia Tech to build a medical school and research institute.

James Hartley, chairman of Carilion’s board, said he recalled talking with the former CFO once the board decided to accept the clinic model.

“I asked him what could go wrong, and he said, ‘Well, the market could crash,’ ” Hartley said. “And that became a reality, and that’s what got us in the position we were in in 2010. That’s when we made the decision to say, OK we’re going to keep at this clinic model, we’re going to keep after our partnership with Virginia Tech, and we’re going to focus on continued quality and set some financial goals.”

The Great Recession of 2008 was followed by a collapse in a type of security Carilion had used to fund capital projects and changes in how Medicare paid for health care.

“After that experience, we did become much more financially conservative. We wanted to be certain we did not jeopardize our financial sustainability by taking any large risk,” Hartley said.

Carilion’s expenses exceeded revenues for four years, starting with 2008, with losses totaling $131 million. It returned to profitability in 2014. That experience led the organization to move more slowly than initially planned in expanding Roanoke Memorial.

“It’s probably why we have taken our extra time, because we do have the experience and learned something from it,” Halliwill said. “We’re probably a little more conservative than other organizations in making these types of decisions, but it is aligned with how we spend our patients’ money. That’s a big deal for us.”

Construction is expected to begin by next spring for both the tower and the behavioral health building. First, though, the Western Virginia Water Authority will need to relocate its Crystal Spring pump.

Gary Robertson, executive director of water operations for the authority, said there will be no disruption of water service, as a new pump will be built before the existing one is taken out of service. Crystal Spring as a water source, the treatment plant and the historic steam pump will remain.

Carilion will cover the approximate $8 million cost to move the pump and purchase the land, he said.

The new hospital buildings are expected to open in 2023.

Carilion’s Roanoke Memorial and Community hospitals anchor either end of the city’s innovation corridor, which has promoted growth in health sciences during the past decade through a partnership with Virginia Tech. An expansion of the Fralin Biomedical Research Institute is underway.

Two of the research institute’s main areas of inquiry involve brains and hearts, the two types of care that are part of Carilion’s expansion.

Carilion’s partnerships with Virginia Tech and with Radford University are expected to continue to bring more students and professionals to the city as Carilion’s academic medical presence grows.

“It really continues to reinforce all the organizations that are working in the corridor, their commitment to that corridor,” said Roanoke City Manager Bob Cowell, who attended Wednesday’s news conference. “This is obviously a substantial investment being made by the hospital, so it really does promote that idea of their involvement.”

Cowell said an update to the comprehensive land-use plan is underway to begin to address meeting the needs that will come through supporting services and additional residents.

Roanoke Mayor Sherman Lea didn’t waste time getting to his proudest moment in his fourth State of the City address.

Carilion Clinic plans to expand Roanoke Memorial Hospital by constructing a 15-story building on the city’s nearby tennis courts, according to…

Work on an expansion to Carilion Roanoke Memorial Hospital is becoming more visible as a new crane prepares to swing into action.

A rendering shows that an addition will be built just south of Carilion Roanoke Memorial Hospital on the site of the city’s former tennis courts.

A rendering depicts a building that will be constructed for psychiatric care along Jefferson Street across from Carilion Roanoke Memorial Hospital.