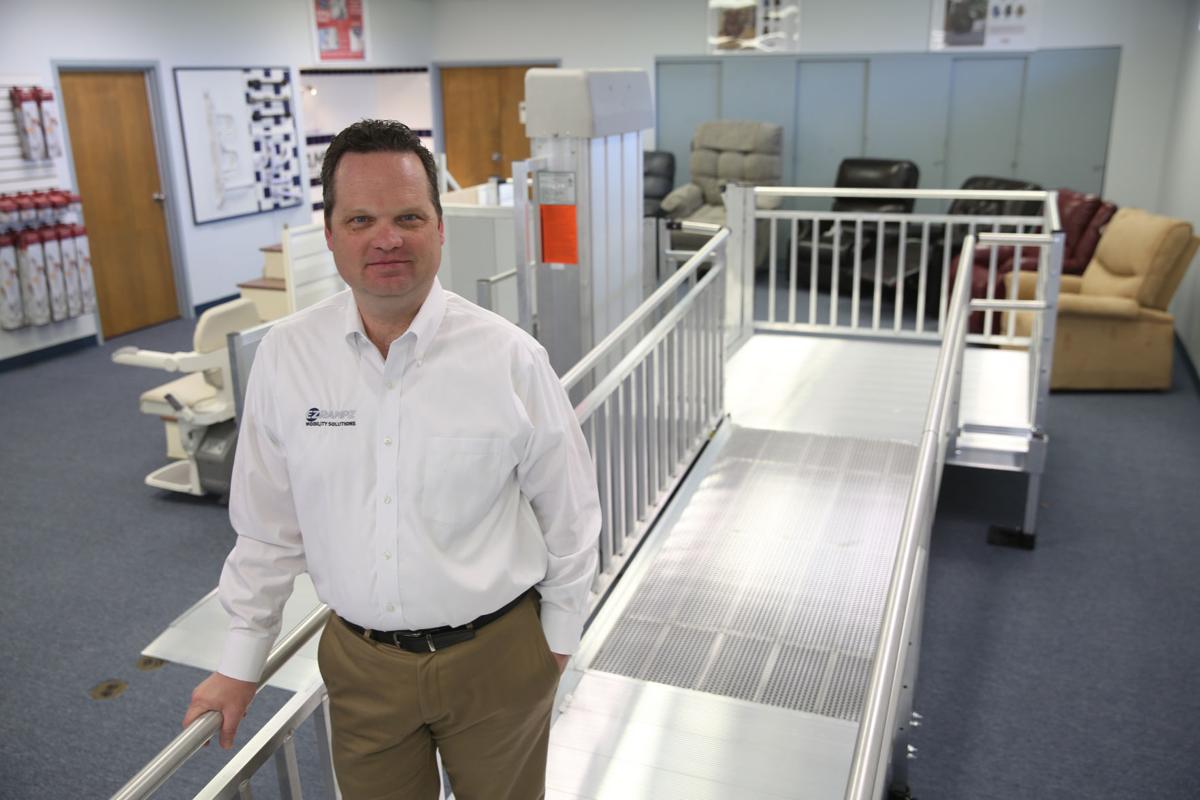 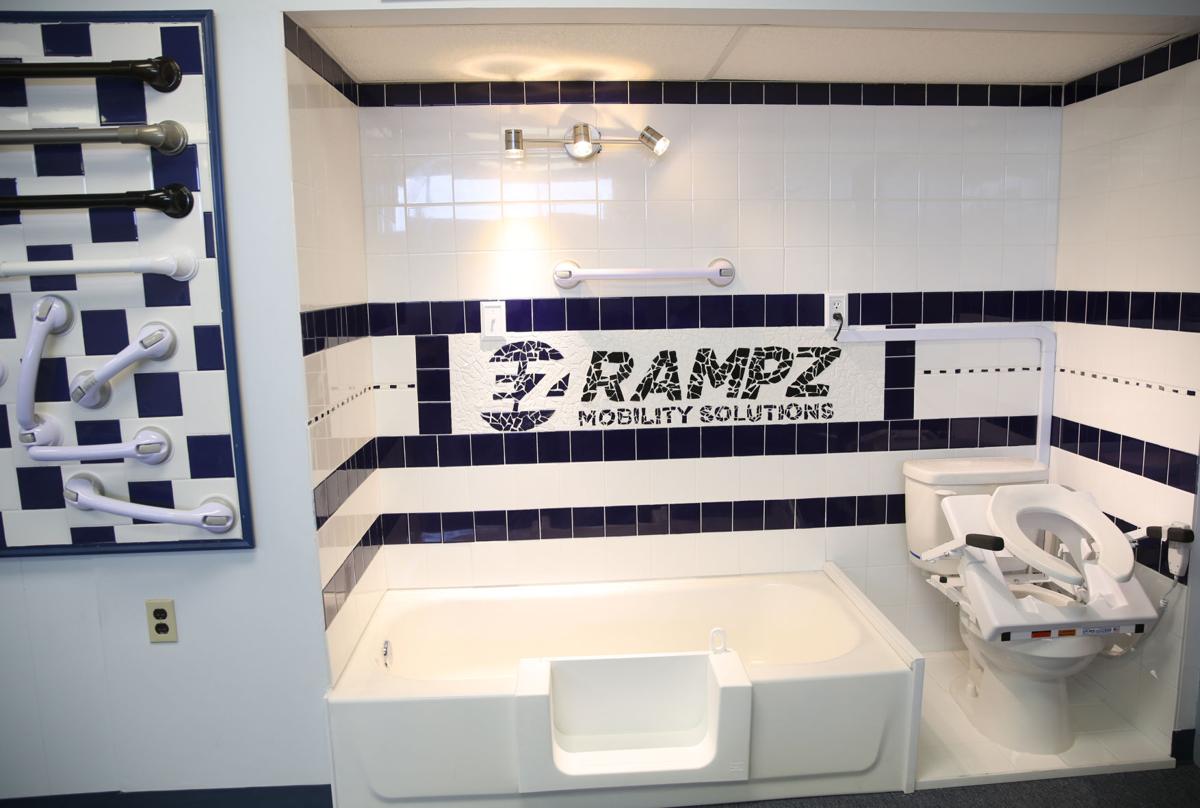 David Todd designed and installed the tile on this display to highlight some of the products he sells at his EZ Rampz/Mobility Solutions business on Hollins Road in Roanoke County. 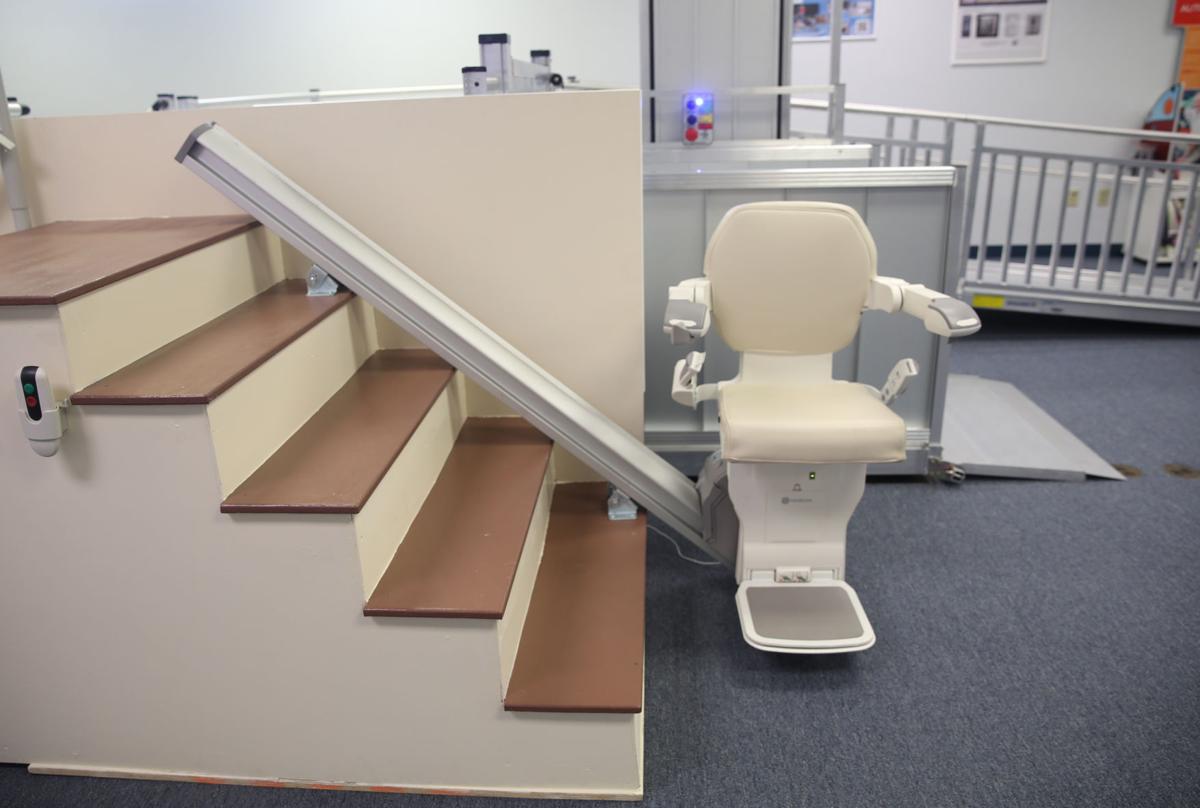 A stair lift can help people stay in their home longer after they can no longer safely negotiate steps. 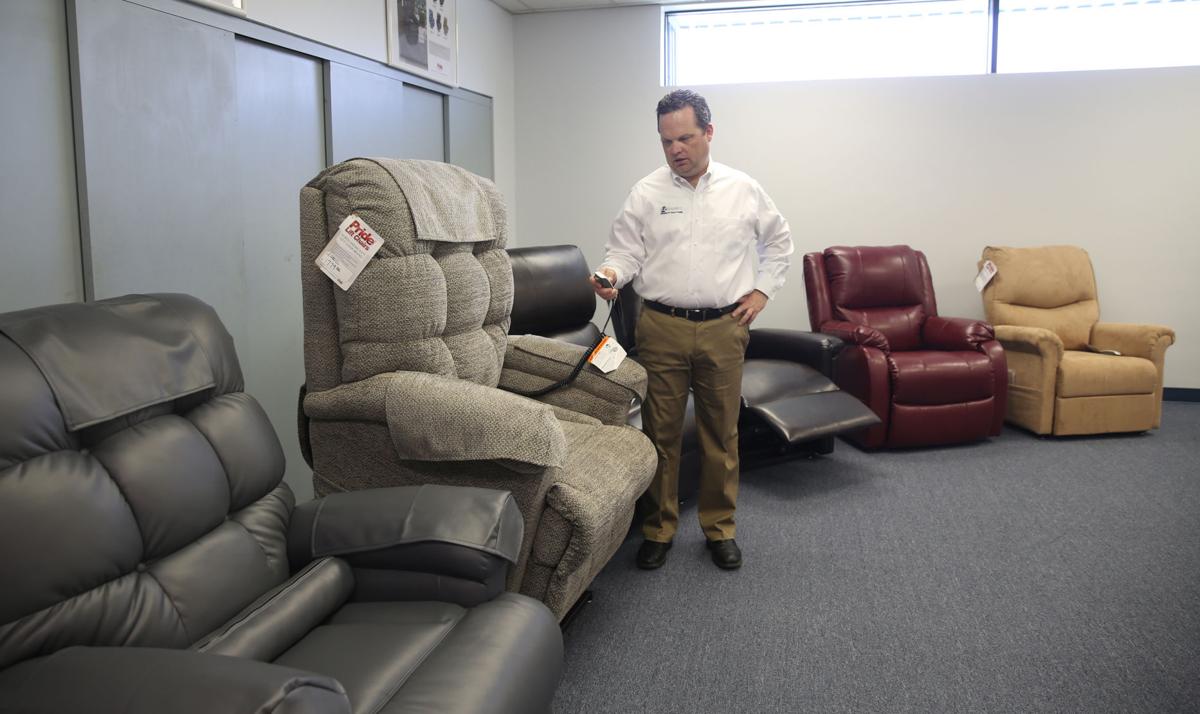 David Todd, owner of EZ Rampz/Mobility Solutions, demonstrates how a chair can help lift someone from a seated position. The company has an interactive showroom where customers can test out mobility equipment. 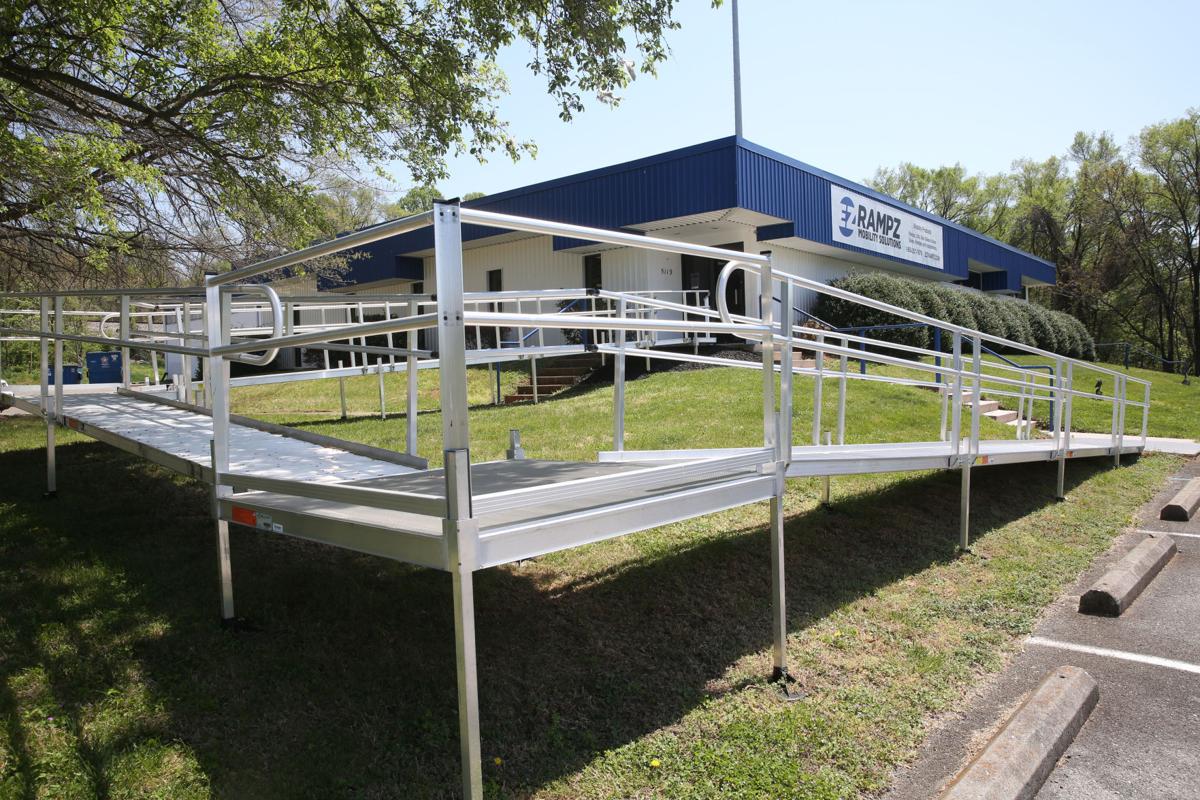 The new location of EZRAMPZ/Mobility Solutions at 5119 Hollins Road includes an outdoor sampling to the front door, of all the configurations of the ramps the company distributes. 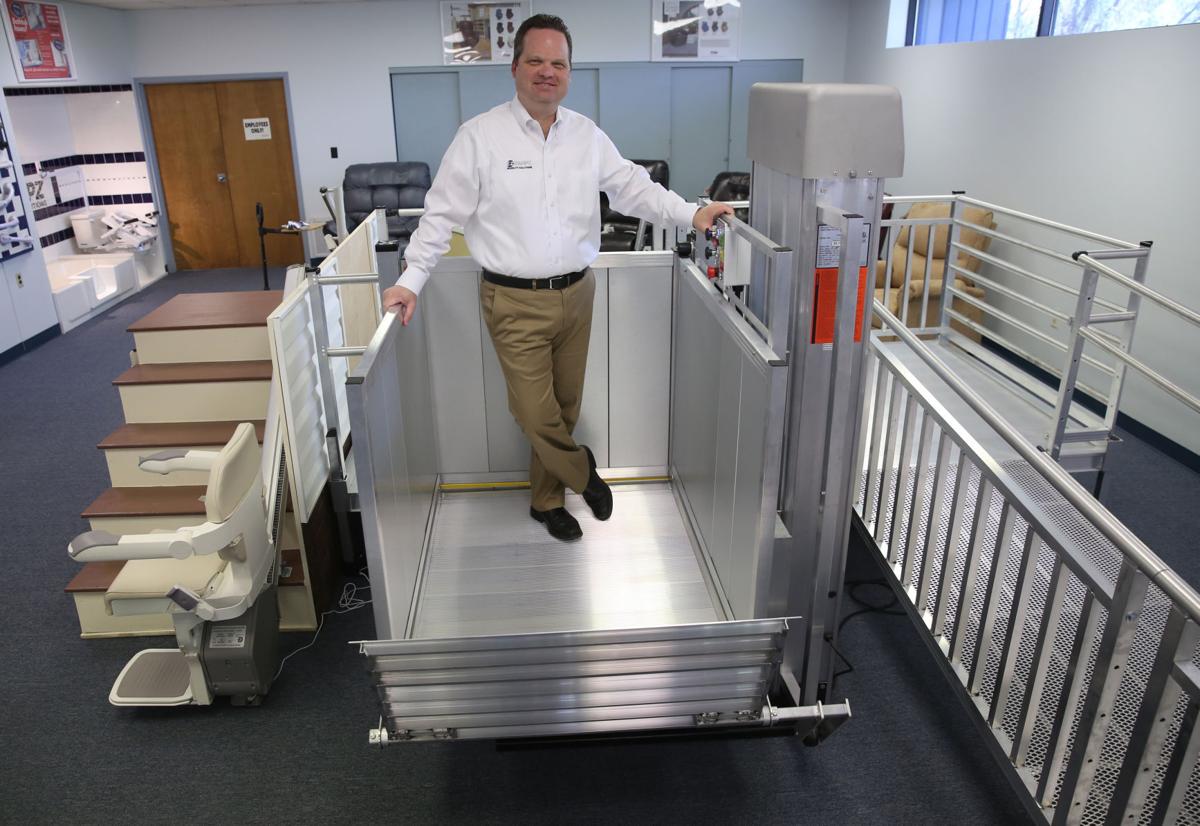 David Todd is the owner of EZRAMPZ/Mobility Solutions. He stands on one of the vertical platform lifts his company sells. They are distributors. He moved his business as it expanded from a 3500 square foot space to a 13,000 square foot space on Hollins Road.

David Todd used to think he would own and operate a restaurant for a living. But after meeting the woman who would become his wife, he decided restaurant operating hours were not for him.

He had always been handy at fixing things, so in 2002 he began installing ramps part-time for EZ-Access, a company based in Washington State that manufactures mobile ramps that are placed at the entrances of buildings.

Now Todd’s ramp construction has evolved into a rapidly growing small business with 18 employees. More than half of the business consists of constructing EZ-Access ramps, but it has also expanded to include other mobility products, such as platform lifts, stair lifts, scooters and other safety equipment for people with mobility needs.

Last year, Todd said his Roanoke County company, EZ Rampz/Mobility Solutions, saw more than $1.6 million in sales, up from $1 million in 2015. The growth led him to move the company from its 3,500-square-foot facility on Peters Creek Road to a 13,000-square-foot warehouse on Hollins Road this winter.

The new building not only has more storage space, but it allowed the company to open an interactive showroom where customers can test out mobility equipment. That’s something many customers want, Todd said, especially as more seniors choose to live at home as long as they can.

When he began installing ramps in 2002, it was just a side gig. But Todd knew he wanted to own his own business. He said he began to see a real purpose behind his work after seeing reactions from the ramps’ users. The first ramp he installed was at the home of an elderly woman in Winston-Salem, North Carolina. He had trouble keeping her off the ramp while he was constructing it. “You don’t understand,” he recalls her telling him. “I haven’t been able to leave my house in years.”

Todd, now 48, was hooked. The reactions he got from customers were overwhelming. One woman cried with joy, telling him she could finally retrieve her mail without waiting for her daughter to come and do it every day.

“You don’t really realize what this does for people until you see it,” Todd said.

In 2008, Todd decided to do the work full time and formed EZ Rampz/Mobility Solutions. At first, he worked out of his garage. By 2011, he realized he needed to rent a space and hire some help. The first four people hired are still employed there.

The company works with people with long- and short-term mobility issues. A large part of its customer base has come from Todd’s long relationship with the Veterans Administration. He estimates that he evaluates about 150 properties a month for veterans to have ramps installed.

The company has installed about 1,200 ramps since the business began.

Skip Davis, an EZ-Access national sales manager, said the most important part of the business is to be respectful of the customer, something she said EZ Rampz has done very well. Installing an access ramp can require difficult conversations, so it’s important to be thoughtful and respectful, she said.

This was very important to 83-year-old Correnia Summers. After hip surgery last year, she knew she would have trouble getting up and down the stairs in her Roanoke home. So she called EZ Rampz to buy a stair lift.

“I’m sure I tried his patience, but he didn’t show it,” Summers said of Todd’s first visit. Without the chair, she would have to crawl up the stairs, she said.

Davis at EZ-Access also said EZ Rampz is “extremely expedient.” The company often installs ramps on a strict timeline, she said, likely as a result of its experience. EZ Rampz is now one of the largest contractors of EZ-Access ramps in the Southeast.

The company’s efficiency led to it being recommended for a contract with the New York City Board of Elections last year. The board owns a number of EZ-Access ramps but needed crews to install them at polling places under a tight timeline — usually just several hours — and then quickly uninstall them.

Polling places are required to be accessible under the Americans with Disabilities Act, and New York City, which is known for its walkability, needs ramps to bridge street curbs at polling sites. Todd said the company handled more than 30 installations at polling sites in April 2016 for the state’s Democratic primary. He also handled sites for elections in June, September and November. He said he expects to oversee about 79 sites for the upcoming November election.

Todd had to increase his part-time manpower for the New York contract and said doing a lot of polling place ramps in other cities might not be feasible, nor would other cities need the sort of ramps a place like New York needs. But the exposure and experience have help boost the company and allowed it to expand into its new space and showroom, he said.

Installing ramps is about 70 percent of EZ Rampz’s business. The rest is made up of mobility equipment sales. Todd expects this to grow to 50 percent of the business soon, especially as the senior population grows — and as more seniors opt to live at home as long as possible. The U.S. Census shows the number of Americans older than 65 is expected to double by the year 2050. A study conducted in 2013 by the Roanoke Valley-Alleghany Regional Commission says the elderly population in the region will increase by 30 percent by 2020.

Todd said he has seen an increase in the number of seniors who want to stay home rather than move into assisted living facilities. Multiple reports from the AARP have found that the vast majority of people older than 50 want to age in place. Technology is often where many seniors turn first.

It’s changed the life of Emilie Broome, 77, in Christiansburg. Walking up the steps in her home was getting the better of her legs, and she said she required shots in her legs just to function. After she bought a lift to take her up her stairs, she no longer needed the shots and she was able to take better care of herself, she said. More importantly, it allowed her to care for her husband in the last months of his life.

“We were able to enjoy our home,” Broome said. “He was able to stay in his home. I was able to take care of his needs.”

The chair looked like “something from outer space” she said, but it allowed them to stay in the house with each other and not require assistance.

Todd said this growing demographic also led him to start renting some of the company’s products. Most wheelchair ramps rent for less than $300 a month and have no monthly minimum payments. The initial cost to purchase a ramp is $2,000 to $8,000, but in many cases the cost is covered by insurance, grants and state agencies. The company doesn’t accept Medicare payments.

Roanoker Jesse Shelor, 59, said he looked all over for a place to rent a ramp. Most places he found offered permanent wooden ramps, which require more construction and permitting. He needed a ramp in 2015 for about a year and half while he dealt with a troublesome foot. He called EZ Rampz again a few weeks ago to install a temporary ramp while he is in a wheelchair. Without the temporary ramps, he would’ve had to install a permanent one or, worse, he would be stuck inside, he said.

Labor Law: Your employee presents a letter saying she is exempt from the COVID vaccine due a religion you’ve never heard of. Now what?

More employers are mandating COVID-19 vaccines, and this has set off a flurry of requests for exemptions – for both medical and religious reasons.

Names and changes: Business recognitions and promotions for the week of Sept. 12, 2021

Dominion to partner on solar project in Virginia coalfields

RICHMOND — A global conservation nonprofit and Virginia's largest electricity utility announced plans Monday to develop what they say will be a large-scale solar project on former surface mines in the southwest Virginia coalfields.

Here are some financial to-do’s to tackle this fall. Also, check out more of this week's best money tips from experts.

Carilion Clinic plans to begin treating patients this fall at its new hub for children’s services at Tanglewood Mall.

The proposed solar farm had faced criticism from the lake community since its announcement.

David Todd designed and installed the tile on this display to highlight some of the products he sells at his EZ Rampz/Mobility Solutions business on Hollins Road in Roanoke County.

A stair lift can help people stay in their home longer after they can no longer safely negotiate steps.

David Todd, owner of EZ Rampz/Mobility Solutions, demonstrates how a chair can help lift someone from a seated position. The company has an interactive showroom where customers can test out mobility equipment.

The new location of EZRAMPZ/Mobility Solutions at 5119 Hollins Road includes an outdoor sampling to the front door, of all the configurations of the ramps the company distributes.

David Todd is the owner of EZRAMPZ/Mobility Solutions. He stands on one of the vertical platform lifts his company sells. They are distributors. He moved his business as it expanded from a 3500 square foot space to a 13,000 square foot space on Hollins Road.