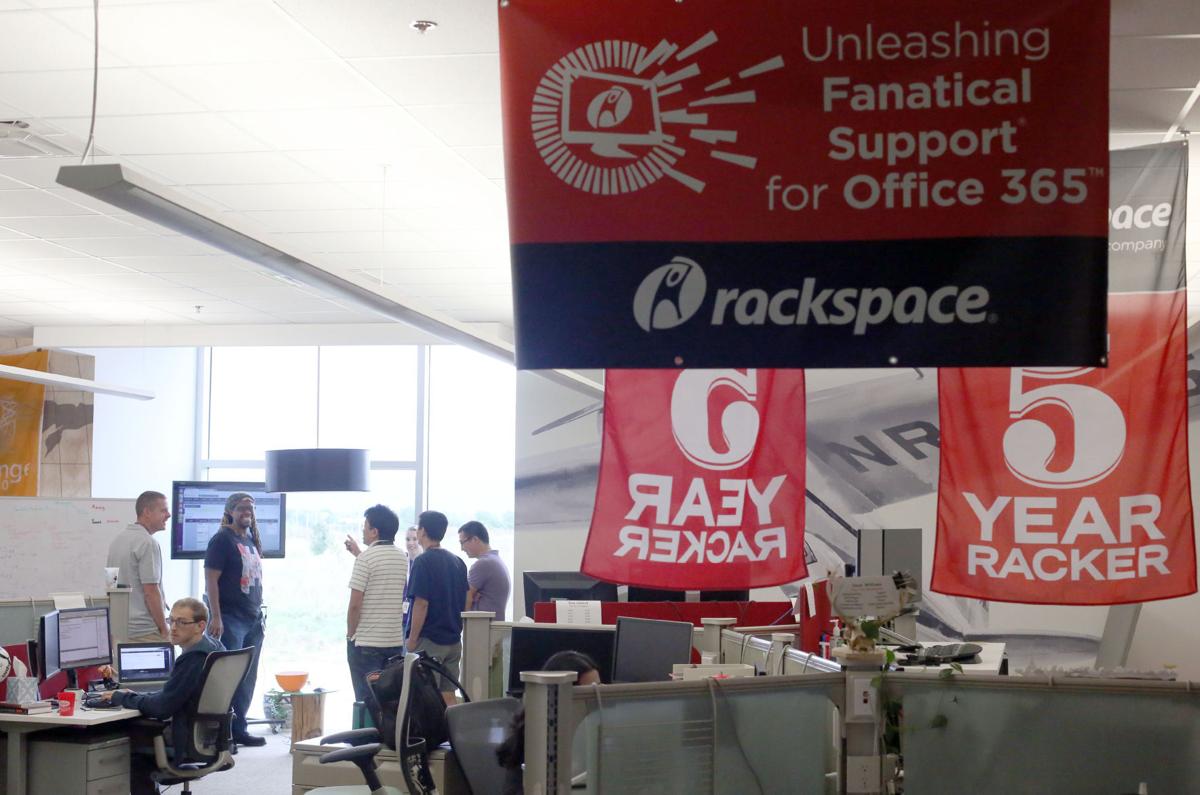 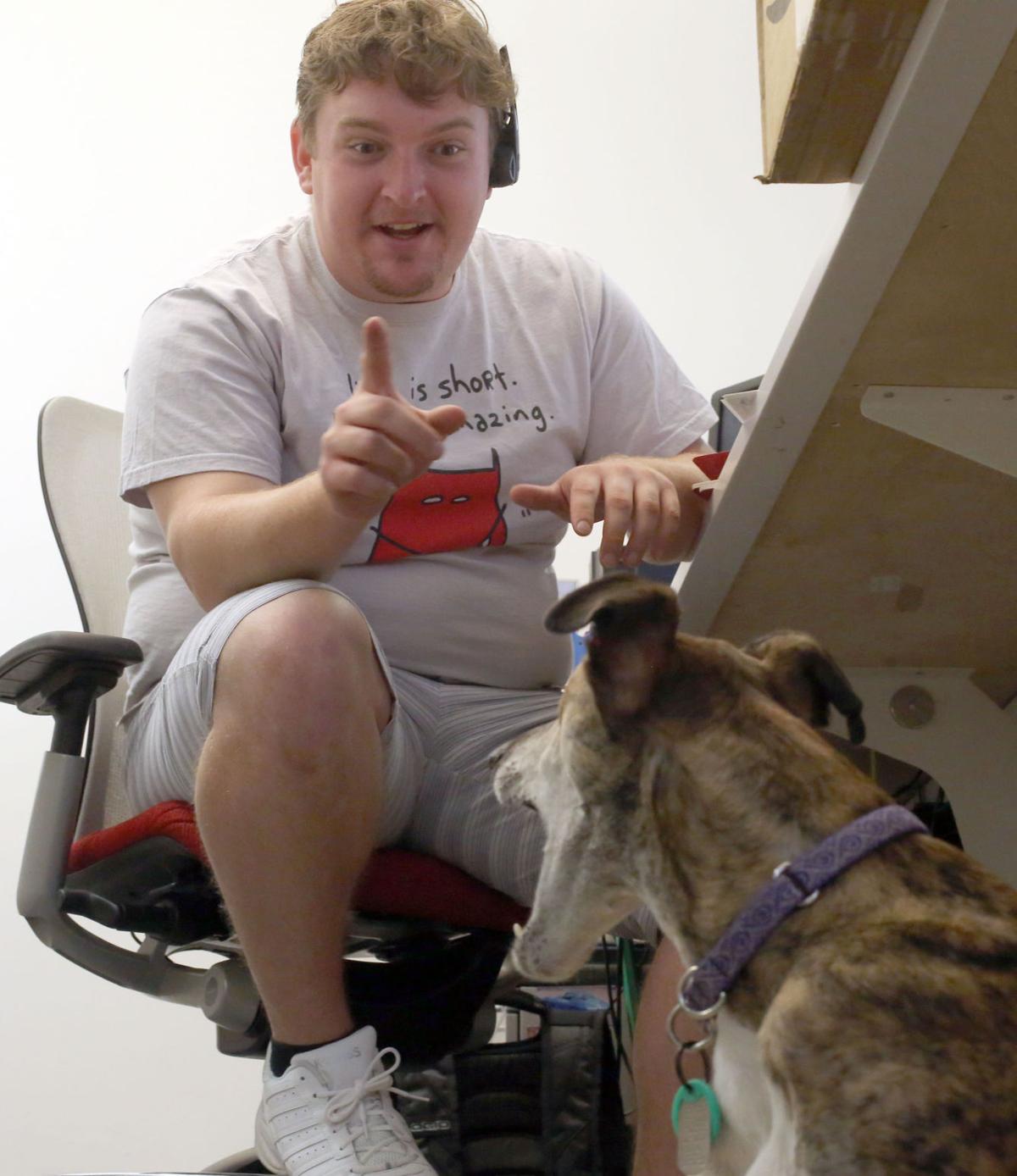 Blacksburg Rackspace office manager Jarret Rhyner talks to his rescued greyhound, Filbert, who hangs out next to Rhyner’s desk. 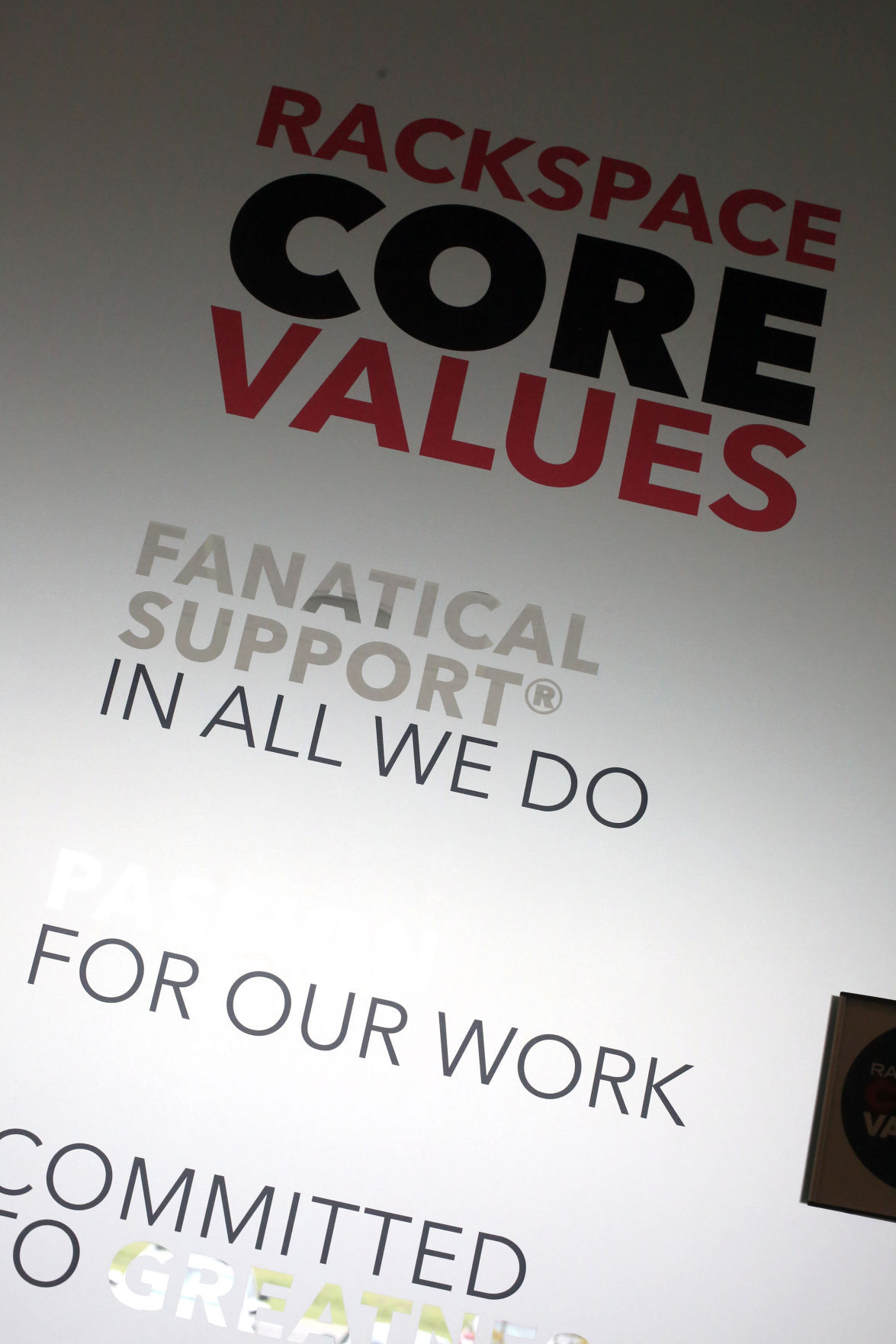 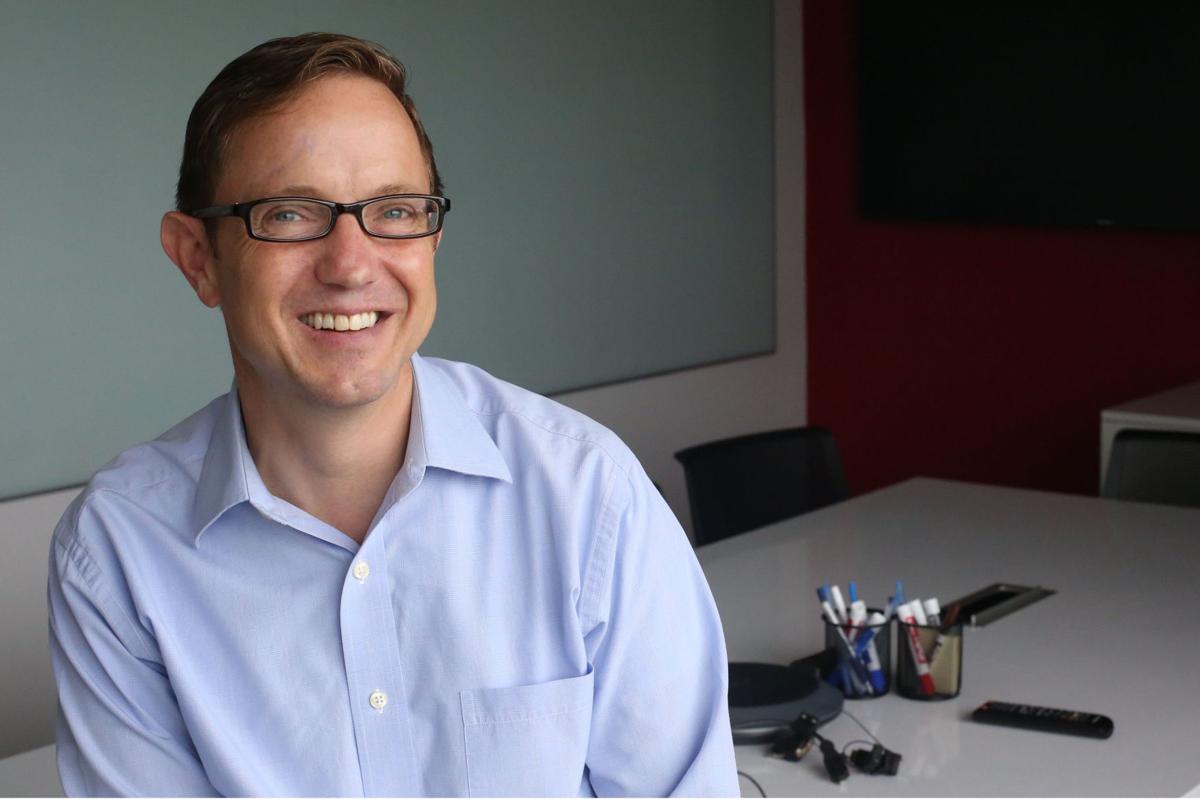 Robert McAden is the Blacksburg Rackspace site lead. He said the Blacksburg office boasts the highest employee retention rate of any of the company’s locations.

The Rackspace office building is on the outskirts of the Virginia Tech Corporate Research Center. 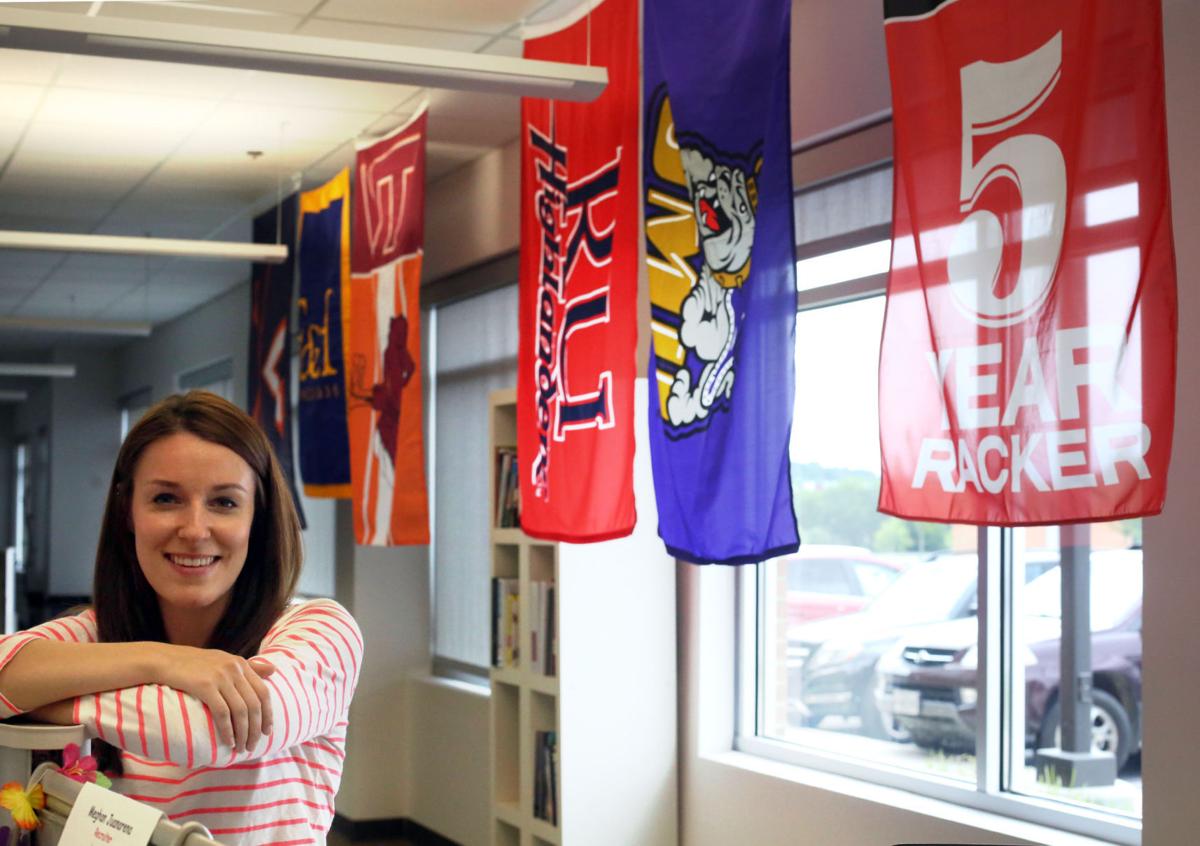 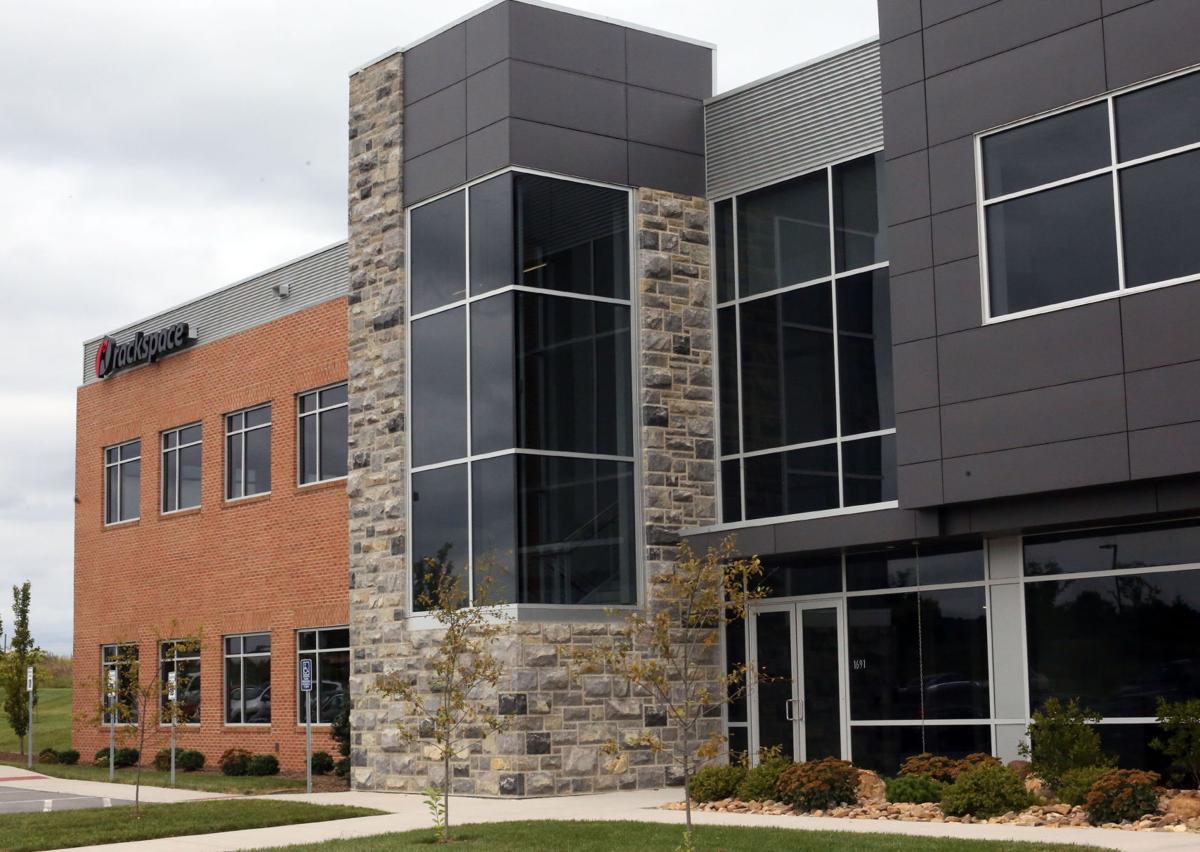 Rackspace’s office at the Virginia Tech Corporate Research Center stands by itself in a former pasture. The company, which was recently purchased by New York-based Apollo Global Management LLC, draws on Virginia Tech to hire workers.

BLACKSBURG — Cloud computing pioneer Rackspace says it’s building some of its fastest growing products more than 2,000 miles from the Silicon Valley, in a pasture that was grazed by cows not so many years ago.

The 99-person engineering center is known as Racksburg around town, but Rackspace co-founder Graham Weston refers to it internally as the company’s “secret weapon.”

The office stands alone on the outskirts of the Virginia Tech Corporate Research Center, past the rolling hills and a zig-zagging John Deere tractor that was mowing one day last week.

The San Antonio, Texas-based company isn’t the largest employer of coders in Blacksburg, a town with an elite engineering school and a nascent technology community that longs to grow into something more. It is, however, the only well-known, billion-dollar powerhouse with a physical presence in the region.

The remote office is certainly out of the way, but the man who created the team before it belonged to Rackspace says that’s exactly why it exists at all.

It has a talent pool in Virginia Tech that works because of the proximity and Rackspace’s unique niche in the market. Employees cost less and stay longer, according to Webmail.us co-founder Pat Matthews. Rackspace bought his company in 2007, inheriting the Blacksburg office along with it.

Rackspace’s recently announced $4.3 billion acquisition by New York City-based Apollo Global Management LLC immediately stirred fears that things may be about to change at the Blacksburg outpost, but Matthews — who no longer works at Rackspace — hopes the competitive advantages that have kept Rackspace here for nearly a decade will be the same reasons the company won’t go anywhere now.

Rackspace spokesman Brandon Brunson previously wrote in an email to The Roanoke Times that the Blacksburg office will continue to serve as a “strategic hub.”

Meanwhile, in a letter sent to employees and later filed with the Securities and Exchange Commission, the company answered a question about the possibility of layoffs by writing, “The candid answer is that we do not know just yet.”

Robert McAden, the Blacksburg site leader, said Weston’s message was clear: “Continue to do what you’re good at, continue to focus and things will be OK.”

Rackspace has been in Blacksburg ever since it acquired local email software company Webmail.us for 1.15 million shares of Rackspace stock, which became worth more than $10 million when the company went public in 2008. Today, that would be worth more than $30 million.

Matthews, a Virginia Tech alum, said he always knew it would be challenging to run the company outside a major tech hub because Webmail couldn’t compete with the lure of California, or the salaries offered by companies like Google and Microsoft.

But Blacksburg was home.

So the company developed a strategy to lean on the one competitive advantage it had over the tech behemoths: proximity to Virginia Tech.

Matthews said Webmail began hiring about 30 part-time workers who stayed enrolled at Tech, but spent their time between classes earning a real-world paycheck at Webmail.

Many of those engineers stuck around when summers came, and joined on full-time after graduation.

Eventually, the program grew into a recruiting pipeline that fed directly from the university.

“Our talent strategy was one of the things that made us who we were. And a big part of that was because of where we were,” Matthews said. “My point of view was always, there’s not a lot of competition in town so let’s make sure we get every hard-working, entrepreneurial engineer that’s at Virginia Tech. I think we did a really good job of that.”

The recruiting pipeline became stronger as Webmail grew, survived the dot-com crash of the early 2000s and became one of the region’s first high-flying startups.

By the time it was acquired, Matthews estimated 75 percent of his roughly 60 employees were Hokies.

Today, McAden said that number is still about 66 percent.

“Ultimately, I think that’s why Rackspace has continued to invest in Blacksburg,” Matthews said. “Really, because of that talent strategy we put in place years ago and they’ve continued to build upon.”

Matthews stayed with Rackspace through 2013, eventually moving to the company’s corporate office in Texas as a senior vice president.

He said he was never worried about Rackspace’s commitment to the Blacksburg site. Matthews saw the company invest in Webmail, growing the internet-based email business threefold in about 18 months — though it eventually took on a new name.

“When we sold the company, we really believed Rackspace had a genuine intention of keeping everything we built, and even accelerating it,” Matthews said. “It all played out exactly how we thought it would.”

Today, Rackspace is a substantial presence in Blacksburg — having opened one of the largest free-standing facilities in the Tech Corporate Research Center.

The company is never shy about showing off its trendy office, complete with everything employees expect from an international tech giant. Millennials abound, giant murals line the walls, dogs sit by coders’ feet, soda machines serve up cold beverages throughout the day and a keg is always tapped for those occasions when a Coca-Cola just won’t do.

The space doubles as a regular meeting area for hackers of all varieties. It sponsors more technology education events than it can count and has created wealth to be pumped back into the startup ecosystem through alums like former site lead Doug Juanarena.

Meanwhile, the office, which is the company’s fourth largest behind San Antonio, London and Austin, now boasts the highest retention rate of any location. McAden said the average tenure for a Blacksburg employee is over five years, compared to less than three years in places like San Francisco.

The office’s most recent cohort of 15 interns featured at least a dozen Hokies, according to Rackspace’s university recruiting lead Meghan Dembrosky. One of those software engineers, John Volk, stuck around this summer and is now working for Rackspace full time — like so many others before him.

“This is kind of home,” Volk said. “This is where I go to school. It’s a great area. I never really left, so to speak.”

As the Roanoke Valley’s profile has grown in the health and biomedical fields, professionals with ties to the region have returned to practice medicine, teach and conduct research.

Cardinal Bicycle has opened its Grandin Village location, which also features a cafe.

Labor Law: Your employee presents a letter saying she is exempt from the COVID vaccine due a religion you’ve never heard of. Now what?

More employers are mandating COVID-19 vaccines, and this has set off a flurry of requests for exemptions – for both medical and religious reasons.

Dominion to partner on solar project in Virginia coalfields

RICHMOND — A global conservation nonprofit and Virginia's largest electricity utility announced plans Monday to develop what they say will be a large-scale solar project on former surface mines in the southwest Virginia coalfields.

Names and changes: Business recognitions and promotions for the week of Sept. 19, 2021

A business offering gift boxes and baskets now has a retail space in Christiansburg.

Blacksburg Rackspace office manager Jarret Rhyner talks to his rescued greyhound, Filbert, who hangs out next to Rhyner’s desk.

Robert McAden is the Blacksburg Rackspace site lead. He said the Blacksburg office boasts the highest employee retention rate of any of the company’s locations.

The Rackspace office building is on the outskirts of the Virginia Tech Corporate Research Center.

Rackspace’s office at the Virginia Tech Corporate Research Center stands by itself in a former pasture. The company, which was recently purchased by New York-based Apollo Global Management LLC, draws on Virginia Tech to hire workers.