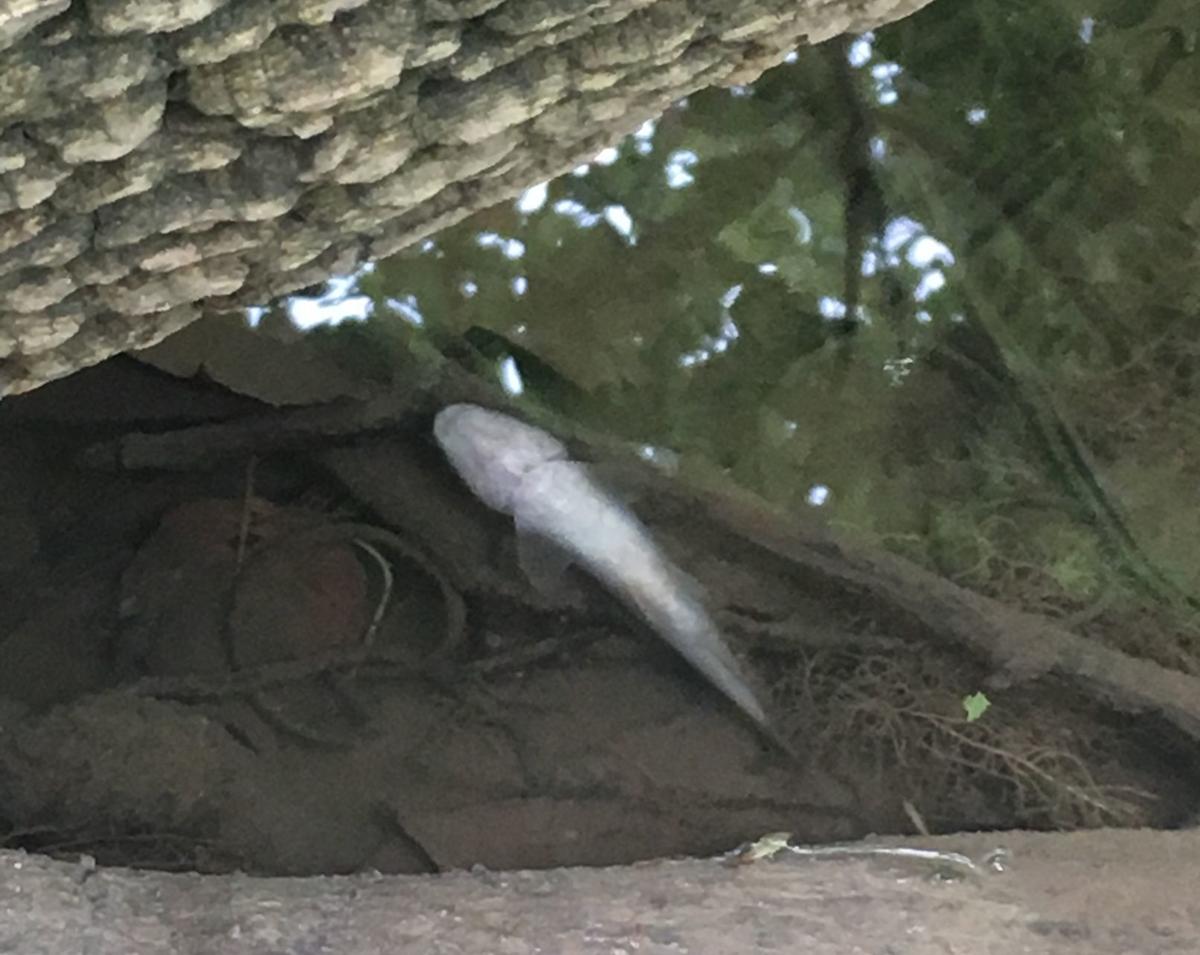 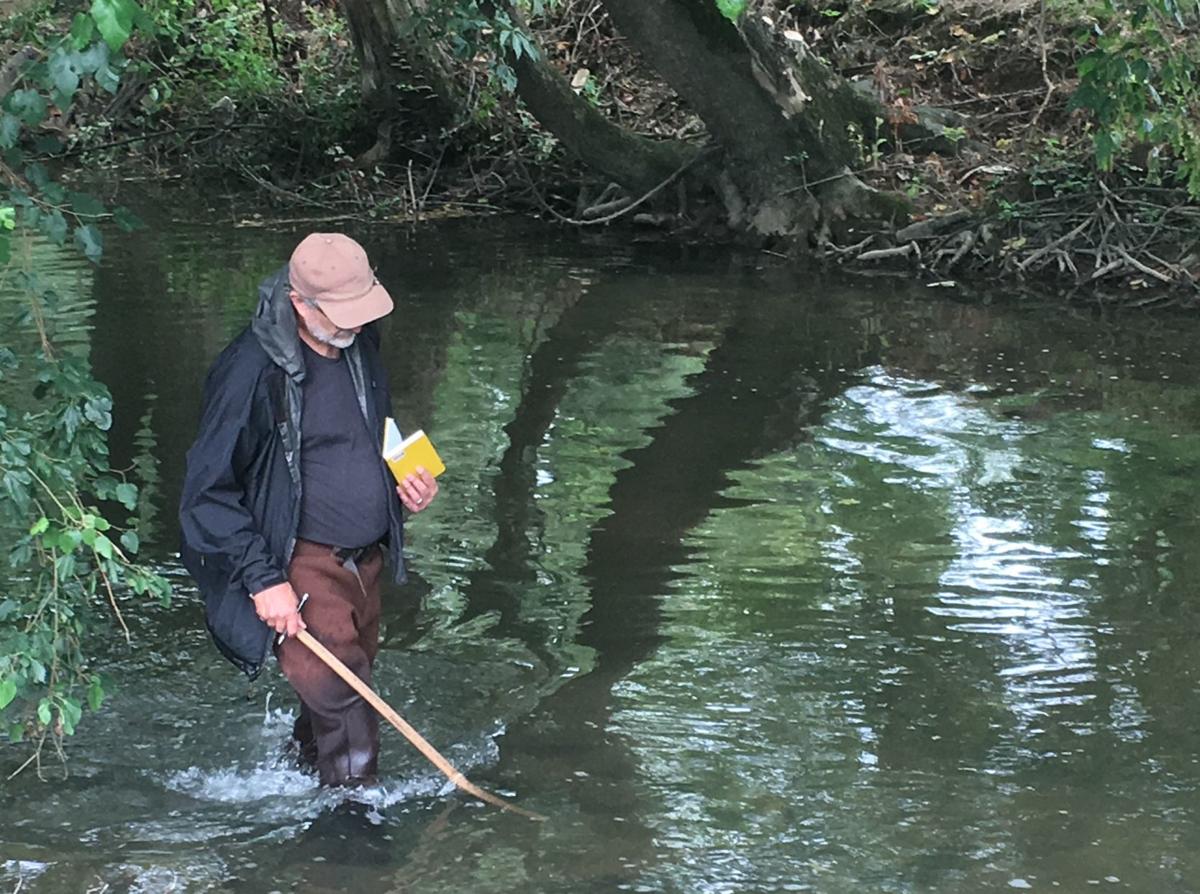 Larry Willis of the Virginia Department of Environmental Quality identifies fish killed in Tinker Creek in 2017.

The company responsible for a chemical spill in Tinker Creek has agreed to pay $425,000 to restore an 11-mile stretch of the creek, where more than 51,000 fish were killed in 2017.

Nutrien Ag Solutions, a global agricultural products company, settled the case under a draft plan proposed by the U.S. Fish and Wildlife Service. The service is accepting public comments before taking final action.

Among other things, the plan calls for the removal of two 10- to 14-foot concrete dams, including the Mason Mill dam, which is part of a Roanoke park.

The Mason Mill and Ardagh dams separate fish populations and bury their habitat in sediment, according to the restoration plan, which also suggests taking down sewer line rock ramps and a diversion structure at the Ole Monterey Golf Club.

Removal of the dam at Mason Mill Park raises questions that need more study, such as the impact on the park, fishing, water quality and sedimentation, according to Dwayne D’Ardenne, manager of Roanoke’s stormwater division.

The city has not taken a position on the proposal.

“That doesn’t mean we are opposed to it, we just don’t know the details,” D’Ardenne said. “It’s just a lot of unknowns.”

Officials with the Fish and Wildlife Service released the plan Friday to The Roanoke Times, but had not responded to follow-up questions by late Monday afternoon.

“The decision on which projects to implement will be based on cost once further progress on design and environmental compliance has occurred,” the 32-page draft restoration plan states.

The plan does not recommend restocking of the creek’s fish, an option it said is “not technically feasible” and too expensive.

On June 29, 2017, a plastic storage tank outside what was then called the Crop Production Services facility in Cloverdale sprang a leak, allowing a highly toxic chemical to flow into Tinker Creek and downstream through parts of Botetourt and Roanoke counties.

Residents who live along the creek began to notice a white foam — and then dying bass, sunfish, minnows, darters and catfish — in what would become one of the region’s largest reported fish kills.

Authorities later determined that an estimated 51,515 fish were killed by Termix 5301, an agriculture-use chemical described by its manufacturer as “very toxic to aquatic life ... with long-lasting effects.”

About 165 gallons of the chemical drained from the storage tank. Termix 5301 is added to herbicides or pesticides to make them more effective before they are sprayed on crops or unwanted plants.

The chemical is water-soluble and dissipated into the creek within a week after the spill, according to tests performed by the state.

In August 2018, Crop Production Services agreed to pay $86,564 in penalties and reimbursements to the Virginia Department of Environmental Quality for its role in the spill. As part of a merger later that year, the company is now known as Nutrien Ag Solutions.

Calls and emails to Nutrien were not returned Monday.

In the past, Nutrien officials apologized for the spill and expressed an interest in helping to restock the creek.

But that was not recommended by the Fish and Wildlife Service, which cited the “limited or lack of experience with propagating many of the fish species” killed by the spill. Multiple years of research would be required, the plan stated, followed by the creation of a facility and personnel to implement the restocking. Another rejected alternative was to do nothing, allowing the creek to recover naturally.

Officials with DEQ said in 2018 that parts of the waterway were showing signs of life, with some small fish, crayfish and snails making an appearance. It was not clear Monday how much the natural recovery had progressed.

After considering a number of options, the Fish and Wildlife Service settled on a plan to enhance the fish habitat. That would be accomplished in part by removing dams and other structures that impede fish from migrating to other parts of the creek, limiting their ability to “feed, breed, grow or rest,” the plan stated.

One such impediment is a “diversion structure” at Old Monterey Golf Club.

Kelly Crovo, manager of the club, said he has heard nothing of the plan from federal officials. The club has some irrigation pipes in the creek, but Crovo said he was not sure if that was the “structure” referred to in the plan.

“It would be nice to talk to somebody about it,” he said.

The restoration plan also calls for a one-time stocking of brook and rainbow trout, which were not killed by the chemical spill, and for providing greater public fishing opportunities at Tinker Creek.

Written public comments on the Tinker Creek plan are being taken through April 20. Comments can be emailed to serena_ciparis@fws.gov or mailed to the U.S. Fish and Wildlife Service, 6669 Short Lane, Gloucester, VA 23061.

The plan is available at http://www.cerc.usgs.gov/orda_docs/DocHandler.ashx?task=get&ID=5859.

Dam removal could be part of plan to restore Tinker Creek

A chemical spill that killed more than 50,000 fish in Tinker Creek could lead to the demise of a popular downstream attraction — the Mason Mill dam.

These Are the Safest Places to Keep Your Emergency Fund

These Are the Safest Places to Keep Your Emergency Fund

Larry Willis of the Virginia Department of Environmental Quality identifies fish killed in Tinker Creek in 2017.