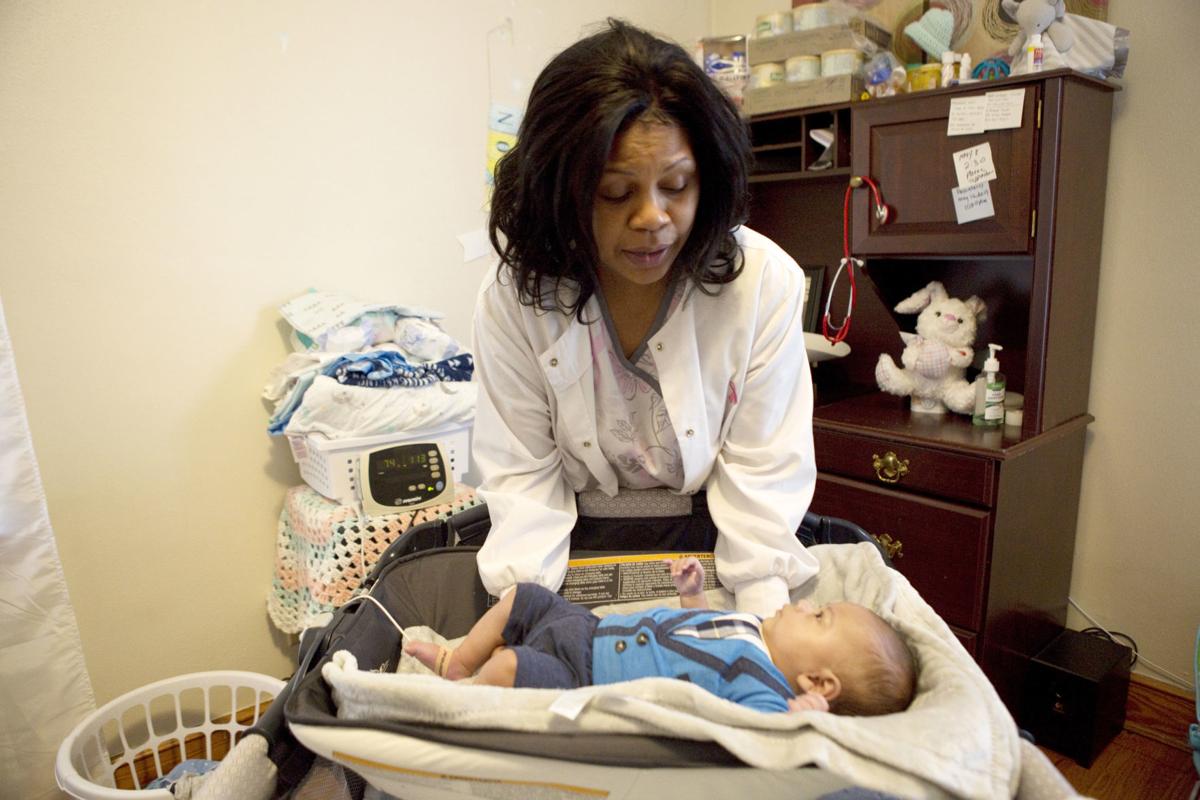 Flossie Horace takes oxygen levels and weighs her 3-month-old grandson Elliyon Horace every morning in her Roanoke home. On this late April day, she carefully picks him up in the position she was told is safest. Elliyon was born with half a heart. His grandmother uses a Locus Health remote monitoring app and equipment to communicate with University of Virginia doctors so they can monitor the baby’s vital signs. 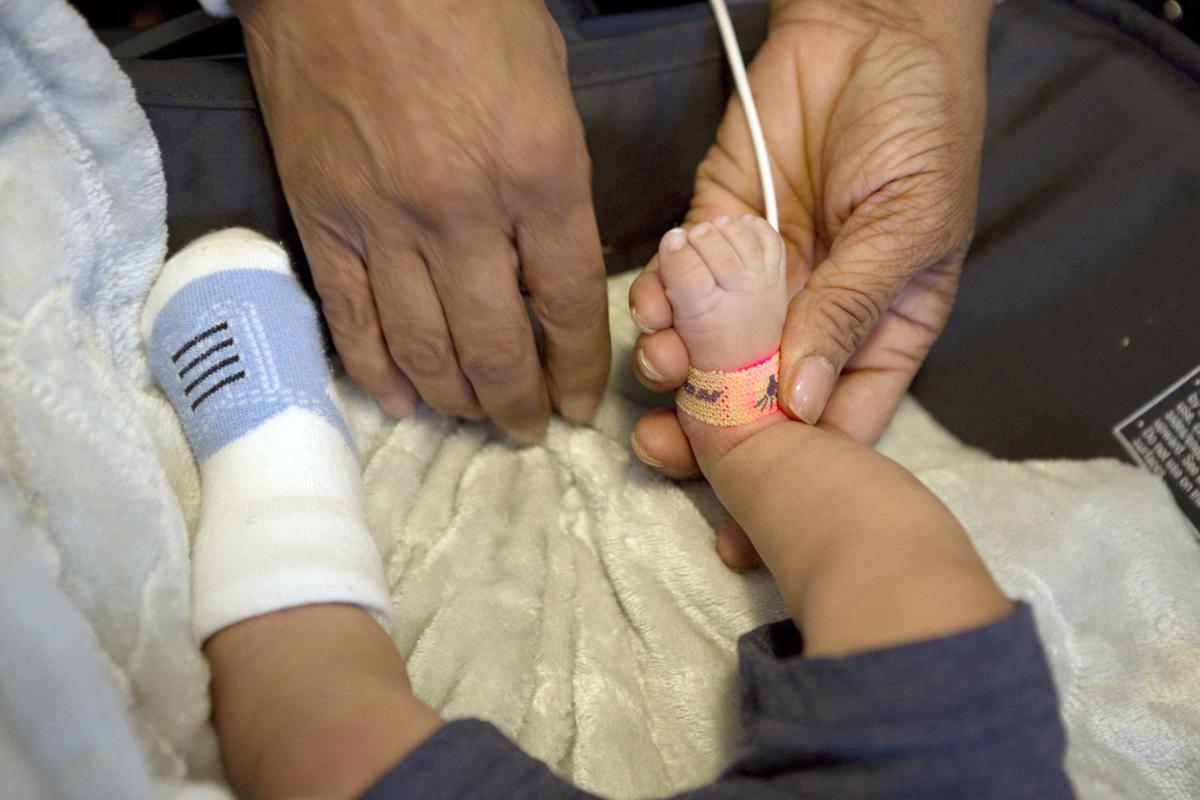 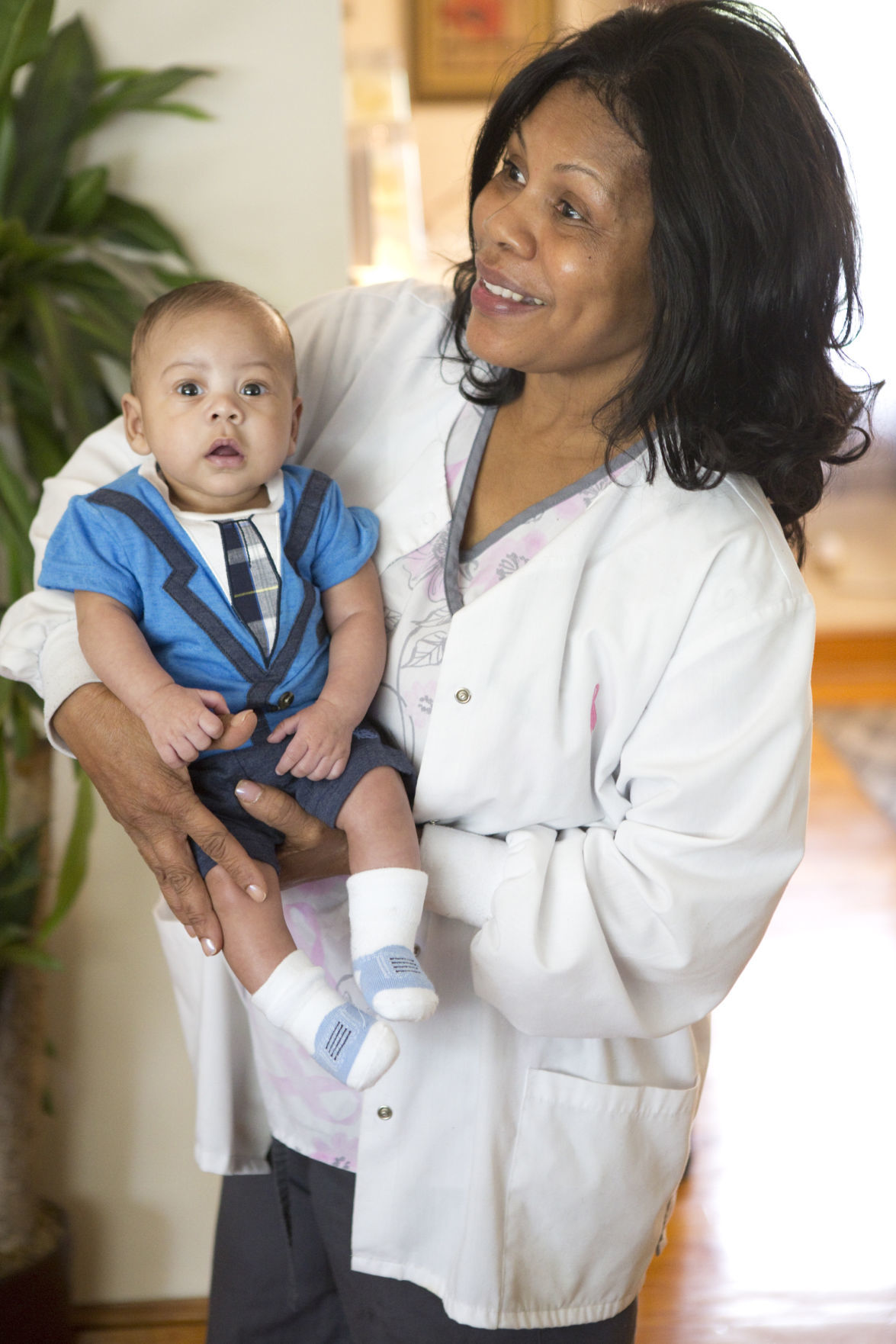 Flossie Horace takes care of her 3-month-old grandson Elliyon, who was born with what his doctor explains as half a heart. Flossie uses a remote monitoring app so that Elliyon can stay at home with her in Roanoke, while his doctors in Charlottesville can keep an eye on him.

Flossie Horace takes oxygen levels and weighs her 3-month-old grandson Elliyon Horace every morning in her Roanoke home. On this late April day, she carefully picks him up in the position she was told is safest. Elliyon was born with half a heart. His grandmother uses a Locus Health remote monitoring app and equipment to communicate with University of Virginia doctors so they can monitor the baby’s vital signs.

Flossie Horace takes care of her 3-month-old grandson Elliyon, who was born with what his doctor explains as half a heart. Flossie uses a remote monitoring app so that Elliyon can stay at home with her in Roanoke, while his doctors in Charlottesville can keep an eye on him.

Elliyon Horace spent the first month of his life in the University of Virginia’s neonatal intensive care unit recovering from open-heart surgery.

“The best way to describe Elliyon’s heart disease is to say he was born without a developed right side of his heart. The lay term that I use is he was a baby that was born with about half of a heart,” said pediatric cardiologist Dr. Jeff Vergales.

Elliyon will need several operations as he grows so surgeons can fashion a way for his blood to flow. His first was at one week, the second at five months. In between, his grandmother, Flossie Horace, was able to take him home to Roanoke because of technology that allowed for continuous monitoring.

Even with her nursing background, Horace said she would have been too nervous to care for Elliyon without the seemingly simple-looking equipment that allowed her grandson’s nursery to become a sophisticated communication center linked with Vergales and others at UVa.

Horace gives Elliyon his medication, weighs him, and checks his temperature and oxygen level; all are recorded on an iPad that links directly into the baby’s medical record at UVa and to a dashboard that allows clinicians to monitor him as if he were in the hospital.

“The platform itself is incredibly robust and is in no way simple, but we want the parent to be able to use it in a very simple fashion,” Vergales said. “That’s really, really important to us that it is simple for them to use.”

Horace said she can contact Elliyon’s doctors and nurses at UVa through the iPad, and send videos and pictures.

An algorithm flags anything that might be of concern.

The equipment was developed at UVa by Locus Health and is being used at a growing number of children’s hospitals all over the country.

“Before we launched the platform three years ago, we would send families home with a big binder with a bunch of tables in it. We would ask families to fill out all the tables and then call us multiple days later and give us all the data,” Vergales said.

He remembers thinking, “‘Boy, I hope these parents can figure it out.’ I had parents who didn’t read as well or maybe didn’t speak English, and we’d get this information in different fashions. Some very educated parents would email spreadsheets. Some would call in with it written on napkins, or we didn’t get it at all.”

Lindsey Koshansky, who grew up in Bonsack and graduated from William Byrd High school, was working in UVa’s pediatric intensive care unit when she decided to return to UVa’s nursing school for her master’s degree in order to discover solutions to take care of larger populations of children.

She loved taking care of children one on one, but was baffled by some of the processes. For example, the vital signs of children in intensive care units are monitored continuously.

“Then they are weaned to every two hours, then three hours until you get to the end and literally check their vital signs before they leave the hospital, put it on their discharge papers and say, ‘Hey, you’re good to go. Good luck,’ ” she said. “How terrifying, and not only for patients and parents who had a very sick child, but I almost felt like I needed to send a part of me home with them.”

Koshansky joined Locus six years ago as vice president of clinical innovations to work on a better way to send sick children home.

The platform was developed by looking inside the health system, thinking about the clinicians and their touchpoints with the patients.

“We developed the tool to really reflect how that process works and needed to work. We were fortunate enough to be a small company and be down the street from a large academic institution, UVa, that wanted to be part of developing these products,” she said.

Families are provided with an iPad and a cellular connection so they don’t need to have Wi-Fi or remember to pay their cellphone bill, she said.

The tool is being used for all types of pediatric patients.

“When we first developed it, we knew we were developing it for more than kids like Elliyon because thankfully that only happens 25 or 30 times a year,” Vergales said. It is being used for children with cystic fibrosis to monitor weight gain. For children receiving chemotherapy. For babies born prematurely who are working on feeding, growing and oxygen levels. And for transplant patients who have a lot of monitoring needs when they go home.

Vergales said only one family, who lived in Virginia’s coalfields, turned down the offer.

“The only issue is in very, very rural Virginia. We only had one patient who had issues of connectivity where they live,” he said. “The mom was very adamant that she didn’t even think the ambulance would come to her home.”

Koshansky said she wants families to feel comforted because they remain connected to the hospital.

“It’s really the proof of the tool because the families say, ‘I just don’t know what I would do without it.’ That’s with all good technology,” she said.

Horace, who has custody of Elliyon, said there is no way she would have been able to bring her grandson home between his first and second surgeries without the support.

“I would have been so nervous. With this, I can communicate with them. UVa is a blessing. Any question I have, they make sure somebody is there all the time,” she said.

Elliyon had his second surgery July 2 at five months old. He’s home and recovering so well that he will no longer need intensive monitoring, Horace said.

Horace said her grandson was just starting to flip over, pull himself up and sit, but he has had to relearn these skills as his strength returns.

He will need to have a third open-heart surgery about the time he turns 3.

Vergales said Elliyon might need other procedures but his future is bright for a normal, healthy life.

“I expect him to look on the outside and act like a pretty normal kid. I want him to go to school. He’s going to ride a bike. He’s going to play T-ball and soccer and all he hopes and dreams and the aspirations Flossie has for him,” he said. “We want him to thrive. We’re not just keeping him alive.”