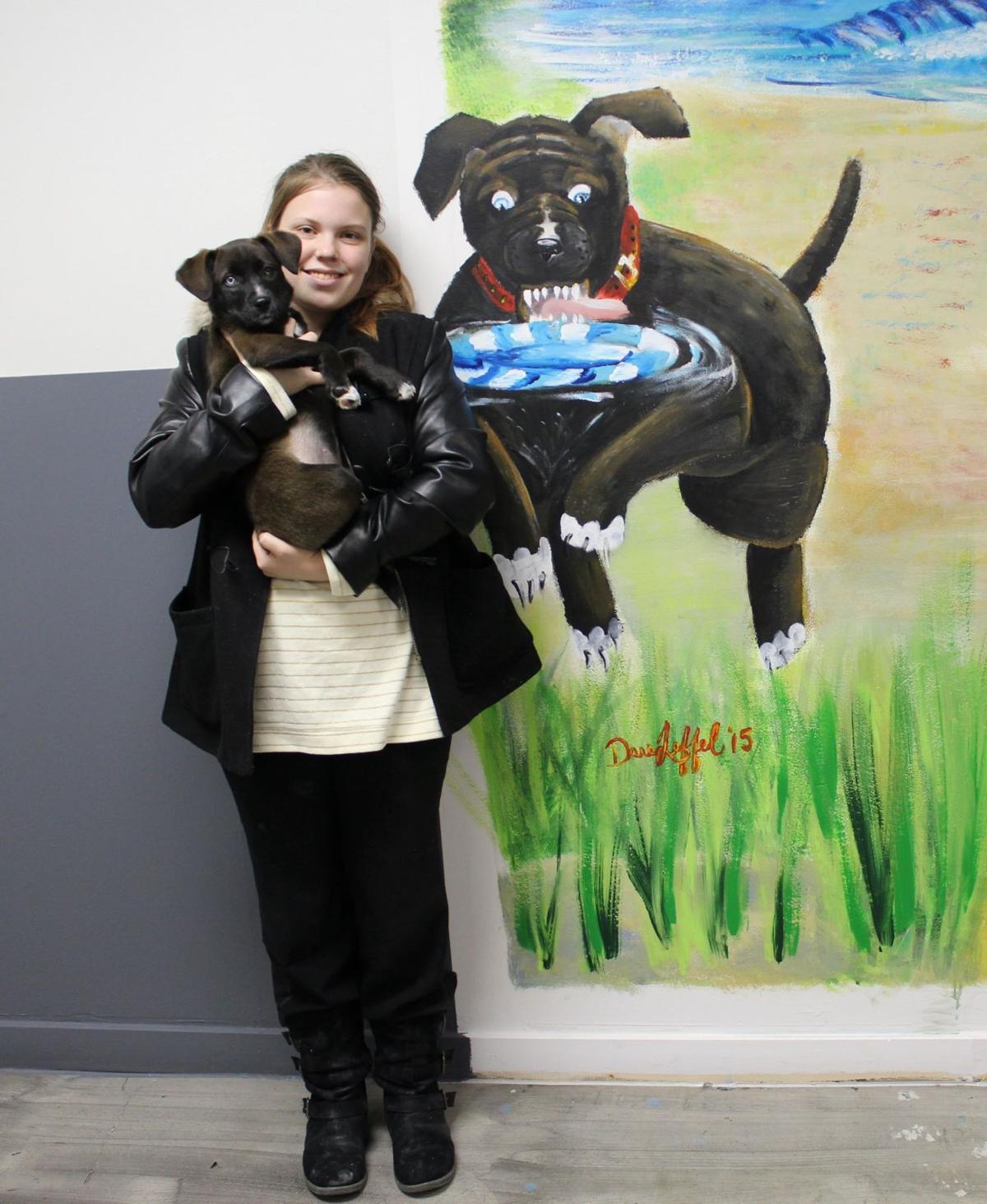 Salem High School senior Dare Leffel used her new puppy, Autumn, as the model for one of the dogs in the mural she painted for Biscuits and Bubbles pet shop located on East Main Street. 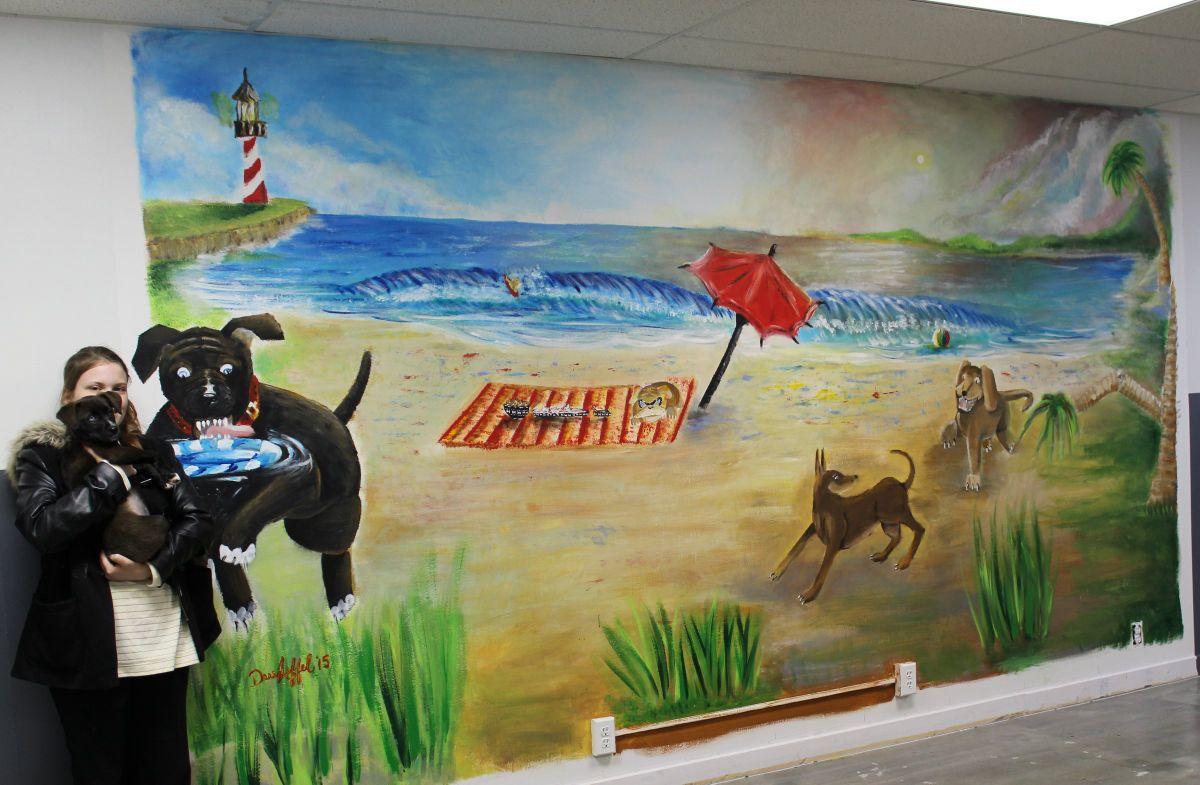 A relaxing beach scene covers a wall in the recent addition to the doggie day care at Bubbles and Biscuits -- the new room for highly active dogs will be ready Jan. 1.

Salem High School senior art student Dare Leffel has gone to the dogs – to paint, that is.

She has just completed a mural for Biscuits and Bubbles, a family-owned pet shop, salon and doggie day care located on East Main Street in Salem.

Owner Blair Johnson has plans to expand the doggie day care program by adding a new room for the most active dogs.

“A TV will be playing Animal Planet, there will be two leather couches, fire hydrants and an agility ramp,” said Johnson. “There will also be a second fenced area outside for them to run and play.”

Even with all the latest in doggie products and services, something was missing — the walls were just too stark.

“Blair sent an email to my teacher, Mr. Gibson, asking if there was someone who could paint a mural, and he thought it would be a great senior project for me," said Leffel.

The project, done using acrylic paints, took about six weeks to complete painting for several hours a day after school. There were no artistic stipulations except that “Blair wanted a beach scene with dogs.” And Leffel had the perfect subjects to paint — a new puppy of her own named Autumn and a dog named Whisper belonging to her boyfriend’s family.

Leffel, who is taking an IB art class this semester, sketched the mural beforehand but found that painting it to scale was more difficult than she thought. Leffel, who plans to continue to study art after high school, would like to one day have a career as an artist, either painting or in the graphic arts field. Or perhaps both.

Johnson said the new doggie day care room will be ready for canines Jan. 1, and hours of operation will change slightly, as well. New hours will be Monday through Thursday from 7:30 a.m. to 6 p.m. and Fridays 7:30 a.m. to 5 p.m.

“The idea is for dogs to have a safe and fun play and interaction while owners are at work,” said Johnson.

For more information, Blair Johnson can be reached at 378-5200 or biscuitsandbubbles@comcast.net.

Why does white always go first in chess?

Ever since the late 1800s, it has been standard for white to go first in chess. Has the time come to get rid of that rule?

New photograph of Prince George for his 8th birthday

Keeping with tradition, the photo was snapped by his mother, Catherine, Duchess of Cambridge, who has a passion for photography.

While the COVID-19 pandemic has had profound impacts on pregnancy and birth rates, some effects have defied expectations.

Cornershot: Thanks to the pioneering women of NPR

National Public Radio is celebrating its 50th birthday this year. I usually have NPR on in the background while I'm working. Back in May, the …

It's very common for pets to be frightened by fireworks around the Fourth of July. Here are some tips to help ease their anxiety.

How to add the perfect pot filler to your kitchen

A pot filler is a fancy addition to any kitchen. Basically it's a cold water tap installed by the cooktop area, eliminating filling pots at the sink.

Recipe of the Day: Summertime Meatloaf

When you think about what to serve for dinner during summer you probably consider pasta salad, ceviche and other cold dishes. But classics like meatloaf are not to be overlooked.

Which insect repellent is best for children? Here's a pediatrician's advice

Warm weather means more kids are getting outside to play, hike and enjoy the fresh air, and it also means preventing insect bites.

How to cut a watermelon 4 ways

Choose from spheres to spikes (without any trips to the emergency room), and learn how to properly store the fresh fruit.

Salem High School senior Dare Leffel used her new puppy, Autumn, as the model for one of the dogs in the mural she painted for Biscuits and Bubbles pet shop located on East Main Street.

A relaxing beach scene covers a wall in the recent addition to the doggie day care at Bubbles and Biscuits -- the new room for highly active dogs will be ready Jan. 1.