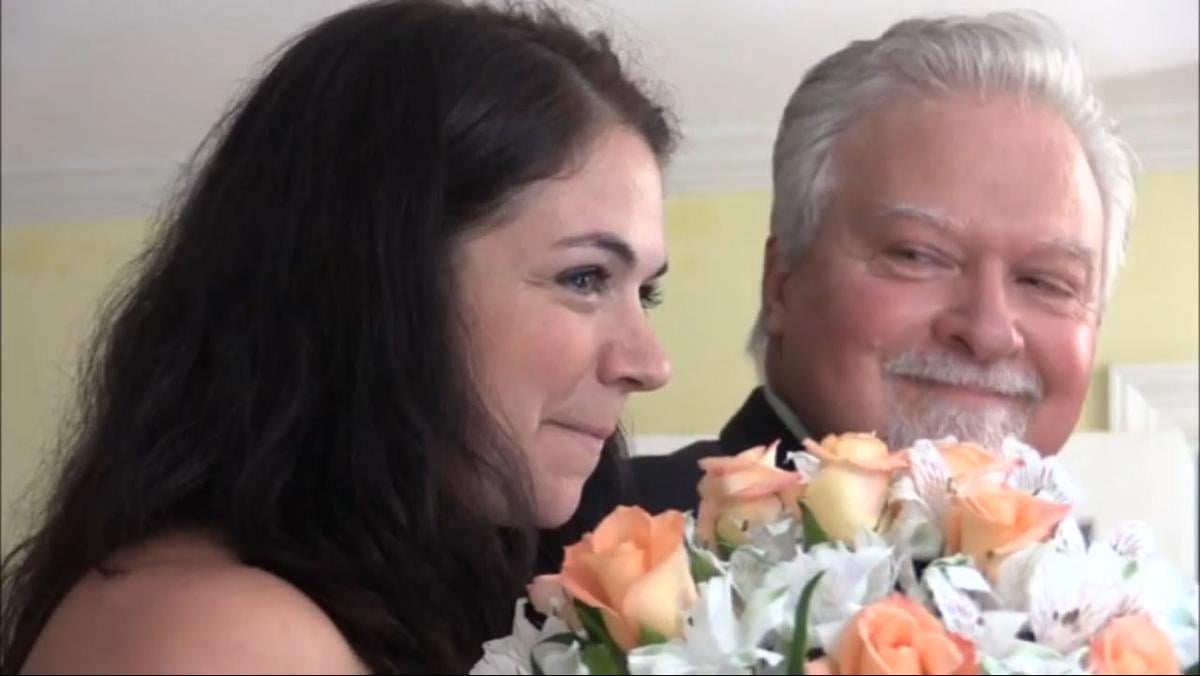 Brigid DiPalma and Wyatt Ewell in “To Tie the Knot or Not,” a movie by John Lawson adapted from his own comedic play performed multiple times in years past at Attic Productions in Fincastle. Originally, the movie was to be screened at the D. Geraldine Lawson Performing Arts Center as part of Attic’s 25th anniversary celebration. A link to the film can be found on the Attic Productions website.

Attic Productions in Fincastle had big plans for its 25th anniversary celebration, with a year full of plays that had previously graced the stage of the small nonprofit’s custom-built theater.

Instead, the coronavirus pandemic has added yet another plot twist to the remarkable story of this community theater.

“We may have been thwarted in 2020, but we are progressing into 2021,” said Katerina Yancey, Attic’s executive artistic director. Much depends on the course of the pandemic and the resulting state guidelines for social gatherings, but Attic hopes to next year perform all the shows that couldn’t be performed this year, in what Yancey called a “25th Anniversary Season, Take Two.”

In the meantime, Attic is staying active artistically by posting YouTube videos of plays, which can be accessed through the theater’s website. The first, “The Angel of Brooklyn,” is a two-actor play written by Yancey’s husband, Dwayne, a prolific Botetourt County playwright who is also editorial page editor for The Roanoke Times.

“The Angel of Brooklyn,” directed by Sally Miller, was performed using Zoom teleconference software. The recording was posted in August.

The next video, “To Tie the Knot or Not,” is a 2017 movie written, directed and produced by Attic founding member John Lawson, an adaptation of his own comedy performed multiple times on the Attic stage. Lawson is one of the children of the late Geraldine Lawson, a co-founder of the theater who was its driving force and whose vision still guides it today.

Originally from Wise County, Geraldine Lawson earned an English degree at Hollins College and a master’s degree in theater from Virginia Tech. During a 1995 gathering at her dinner table, she and a group of friends decided to form Attic Productions. She became the founding president.

At first they rehearsed in churches and performed in schools. The productions regularly filled seats. “Geraldine had her finger on the pulse of Botetourt County. She knew her audience,” Katerina Yancey said.

She was, however, the first person to set foot on the stage in the D. Geraldine Lawson Performing Arts Center. “Geraldine went to the building when it was under construction, her mother was with her. They were the only ones there in the auditorium at the time. Geraldine made her way up to the stage and gave her opening speech. I wish I had been able to hear it,” Yancey said.

Lawson handled so many tasks herself that her duties had to be divided among at least two people after she died. The love of theater among the volunteers drawn to Attic have kept it going strong in the years since.

In March, the cast and crew were in the midst of rehearsing “Welcome to Mitford” by Robert Inman, based on the popular Mitford novels by Jan Karon, with flyers and posters printed, when the COVID-19-related shutdowns started, affecting all theaters throughout the region. “There were some people that went into mourning,” Yancey said. “Mourning and shock and disbelief. As artists we have so much of ourselves tied up in the productions.”

Attic has plans to post more videos before the end of the year. “We will also be filming a short play called ‘The Shifter’ written by students in John Lawson’s class at the community college in Wytheville,” Yancey wrote in an email. “We will be streaming it around Halloween.”

Many additional ideas are under discussion. Planning is tricky with the course of the pandemic still a major unknown.

What makes a woman beautiful? Society’s answer changed significantly between 1870 and 1970. For better or worse, our appearance communicates s…

Brigid DiPalma and Wyatt Ewell in “To Tie the Knot or Not,” a movie by John Lawson adapted from his own comedic play performed multiple times in years past at Attic Productions in Fincastle. Originally, the movie was to be screened at the D. Geraldine Lawson Performing Arts Center as part of Attic’s 25th anniversary celebration. A link to the film can be found on the Attic Productions website.