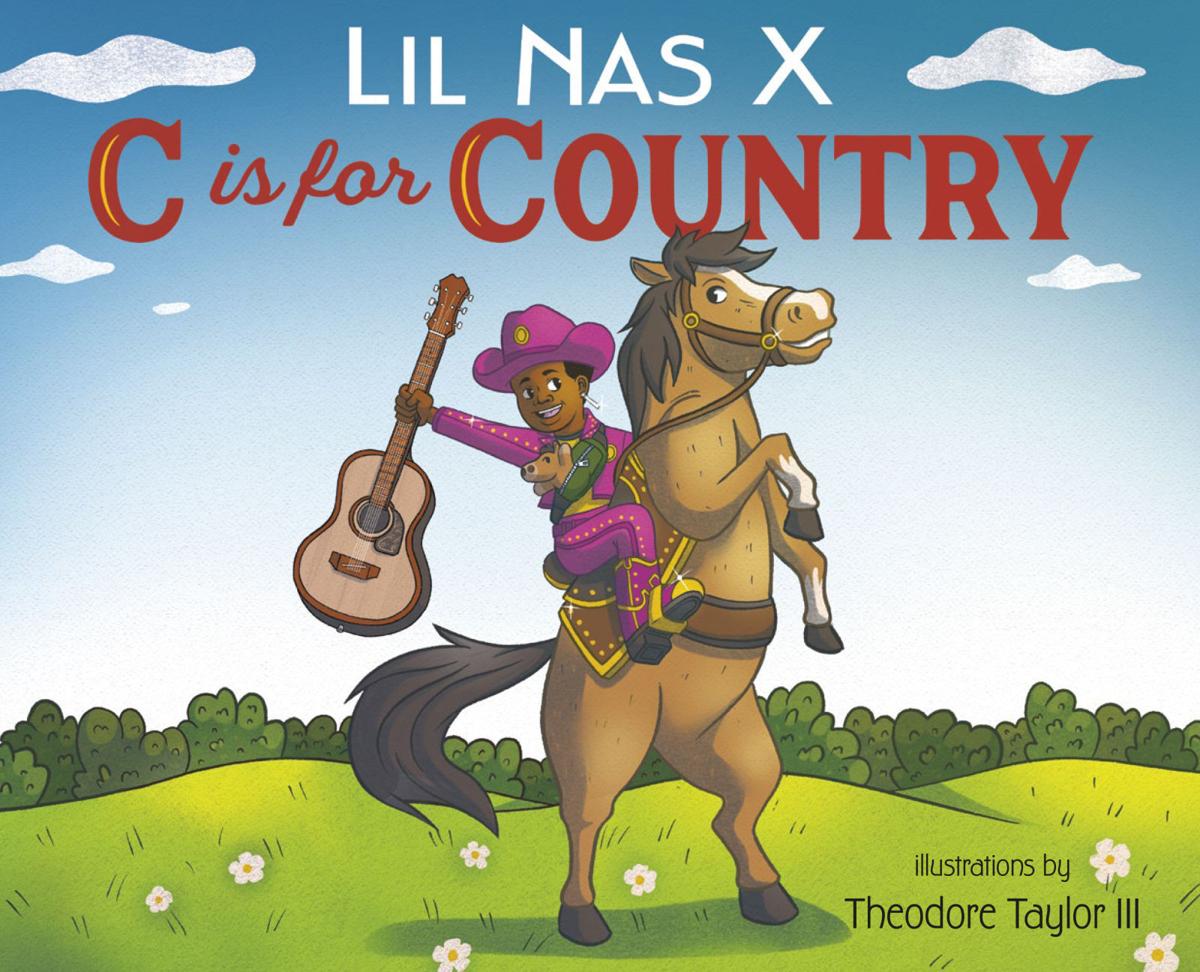 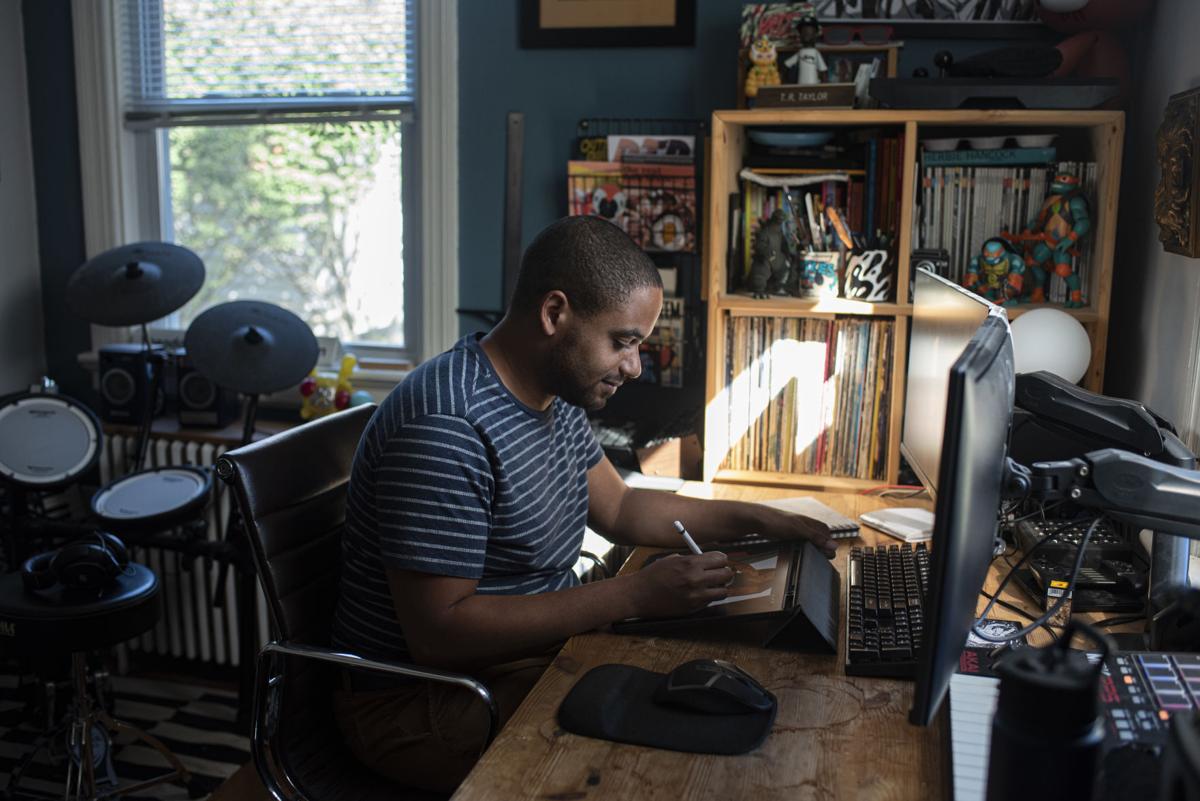 Roanoke-born artist Theodore Taylor III with his drawing tablet at his desk in his Richmond home.

A Roanoke-born artist has illustrated “the best kids’ book of all time.”

In 2018, Georgia native Lil Nas X, original name Montero Lamar Hill, came out of nowhere — or more precisely, out of the online video platform TikTok — with a humorous country hip-hop fusion called “Old Town Road” that broke all records for time spent as the No. 1 single on the Billboard Hot 100.

In “C Is for Country,” Lil Nas X and a pony named Panini mosey out to teach young readers their ABCs. The illustrator bringing that journey to life is 34-year-old Theodore Taylor III, “Teddy” to his friends, Patrick Henry High School Class of 2004.

Taylor, who met his wife, photographer and jewelry maker Sarah Schultz-Taylor, while both were art students at Virginia Commonwealth University in Richmond, said he’s not authorized to say much about “C Is for Country.” He didn’t work with the musician personally — the entire collaboration was handled through his publisher.

“It was a pretty quick project and it started right before quarantine happened,” Taylor said. “That was kind of like my quarantine project.” While working at home in Richmond, he had his 5-year-old son Theo with him, which created some challenges in getting the art done.

It’s not his first artistic collaboration with a celebrity. In 2015 and 2016, he illustrated the three picture books in the “Little Shaq” series created by National Basketball Association legend Shaquille O’Neal.

Prior to working on “Little Shaq,” Taylor had only one book published, “When the Beat Was Born: DJ Kool Herc and the Creation of Hip Hop,” written by Laban Carrick Hill. For his work on “When the Beat Was Born,” the American Library Association bestowed Taylor with the Coretta Scott King/John Steptoe New Talent Award.

“I think that’s how they found me,” Taylor said, referring to Shaq’s publishers.

“When the Beat Was Born” also won the Texas Bluebonnet Award in 2016, an award designed to encourage Texas children to read. Montgomery County author Tom Angleberger’s “The Strange Case of Origami Yoda” won that same award in 2012.

Taylor has had a penchant for drawing since he was very young, although he wasn’t necessarily aiming for a career in picture books. “I have a stack of sketchbooks in my mom’s basement from elementary school that she probably wants me to take out of there,” he said with a laugh. “I’ve always been interested in animation and cartoons and comics and things like that.”

He received a lot of encouragement from Patrick Henry teacher and art department chairman Fletcher Nichols, who retired in 2018 after 31 years with the school. Taylor said Nichols made him realize that art could be a profession.

(Taylor’s mother, Leslie Taylor, used to be an editor for The Roanoke Times and now edits Roanoke College Magazine.)

After he graduated from VCU, his art for album covers and posters caught the eye of the art director who recruited him for “When the Beat Was Born.”

“It just continued from there,” he said. “I just sort of got lucky!”

Taylor has illustrated nine books so far. The next book he’ll finish will be one about street art, and, in a first, he is writing it as well as illustrating. “For this one, I have to come up with everything on my own, it’s a lot different. I’m learning a lot.”

Next up will be another first, a graphic novel. Keep up with Taylor at theodore3.com.

Glencoe Mansion, Museum & Gallery is pleased to announce the opening of the gallery show “A Painted Portrait of a Beloved: A Family Heirlo…

Craft & Draft, a beloved annual Radford festival, will be back this year with a new look.

Roanoke-born artist Theodore Taylor III with his drawing tablet at his desk in his Richmond home.