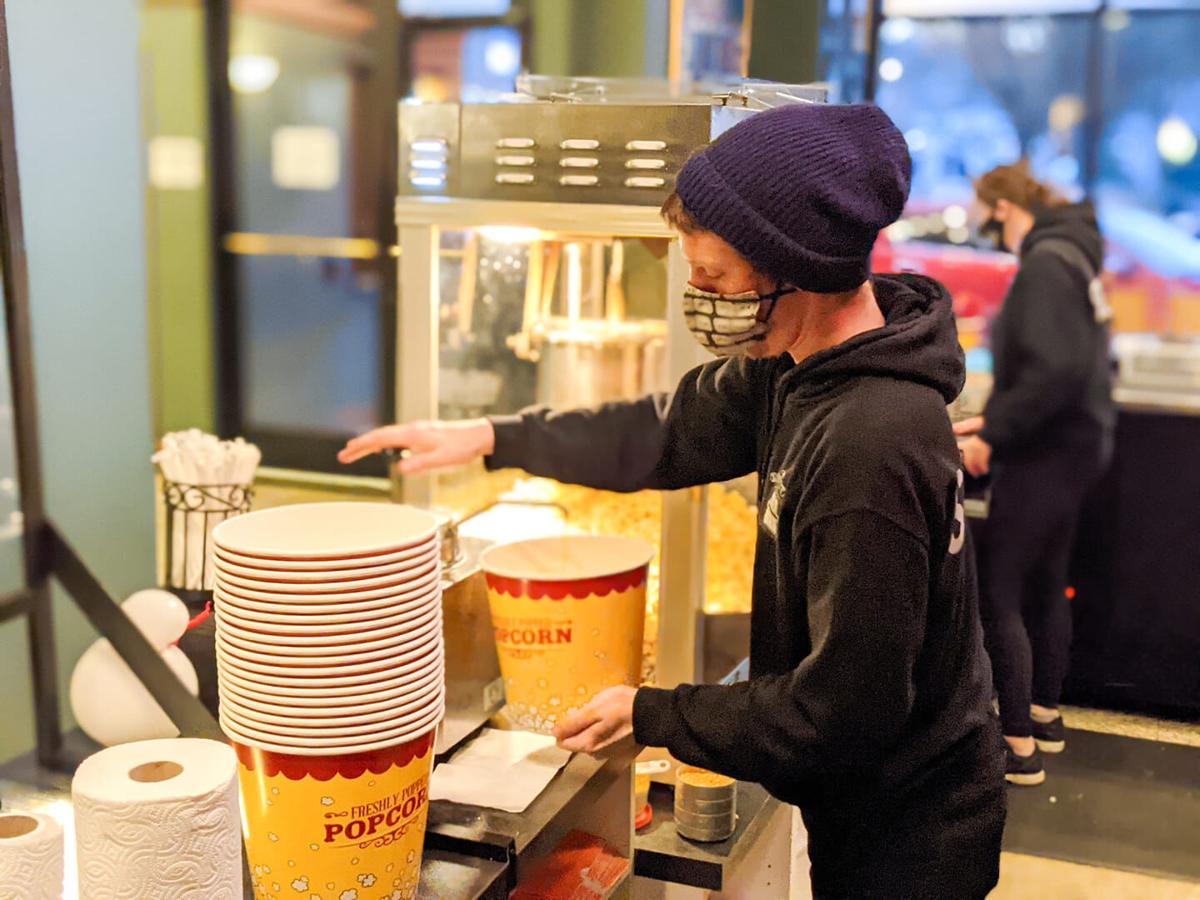 A Grandin Theatre employee puts butter on popcorn. During the spring 2020 shutdown brought about by the COVID-19 pandemic, the nonprofit art house theater sold its popcorn curbside. 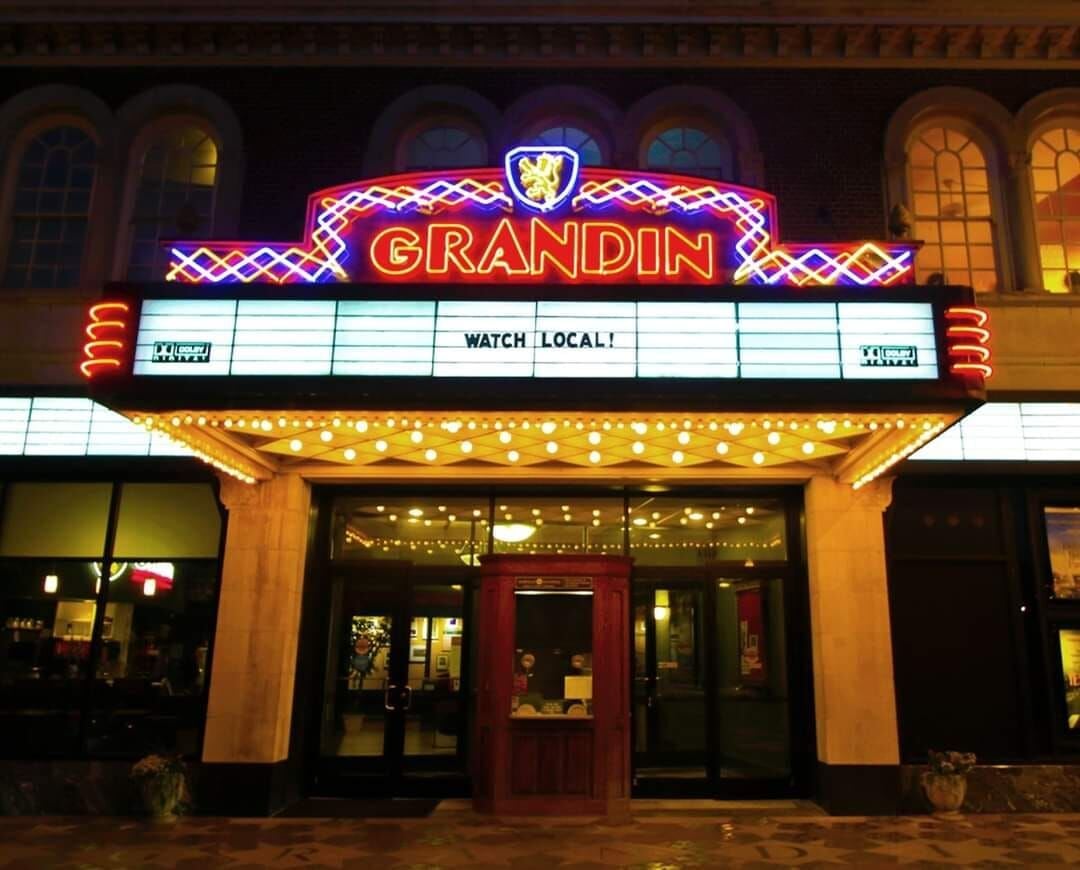 The pandemic is the latest of many challenges the Grandin has weathered since opening in 1932.

The Grandin Theatre in Roanoke has been showing movies to packed houses — or at least, houses packed as much as state restrictions on audience size permit while the pandemic continues.

In June, as the Grandin reopened to moviegoers, “We were at the beginning of shifting to a new model that was safety-first, limited engagement, and socially distanced, all the COVID-related stuff. We didn’t know if it was going to be successful,” said Grandin Theatre Foundation Executive Director Ian Fortier.

Fortier emphasized that the theater, which is run as a nonprofit foundation, still needs all the donations it can get. Also, like other Roanoke Valley arts organizations faced with pandemic-related revenue loss, the Grandin has had to drastically reduce its staff, from 23 employees to five.

Seeking additional funding, the Grandin is applying for a new kind of COVID-19 federal assistance. Created in the Dec. 27 federal stimulus package and offered through the Small Business Administration, the Shuttered Venue Operators Grant or SVOG is intended to help qualifying performing arts organizations, movie theaters and museums.

“A lot of organizations that qualify in Roanoke are going to be going after this money,” Fortier said, noting that an organization cannot opt for an SVOG and also apply for a Paycheck Protection Program loan.

All that said, the Grandin’s strategies for navigating the pandemic have earned praise from outside sources. Roanoke-based marketing firm Wallace 360 published a lengthy article in October that references the multiple crises the theater has weathered since it first opened in 1932.

“COVID-19 is not the first turning point that forced the Grandin to adapt to continue its mission,” wrote Katie Wallace. “Although it looks a little bit different, the Grandin Theatre got creative and adapted to the situation at hand, all the while staying true to its values.”

In the summer, the Grandin started a private rentals program, allowing customers to rent its empty theaters, lobby and art gallery for events like anniversaries, birthday parties — or just for the sake of getting out of the house to watch a movie. The theater has been rented to gatherings as small as two, Fortier said.

“This in a lot of ways has been the saving grace for an independent movie theater,” Fortier said. “Since June 1 through January we’ve done something like 180 private rentals.”

As for public programing, the Grandin’s booking agent, Jan Klingelhofer of Pacific Film Resources in Oakland, California, praised Fortier’s choice to hold once-a-week screenings of familiar titles from the past rather than trying to book new releases that are almost always postponed. Klingelhofer noted that theaters maintaining a schedule of multiple screenings over multiple days have to expend a lot of money and effort on cleaning in order to meet pandemic safety standards.

By contrast, Fortier “focused on a single event every week so that the community could say, ‘I want to go to a movie,’ and they had a time, they had a place,” Klingelhofer said. “He would actually sell them out and I’m sure that those who came felt … it was populated enough to have that sense of community.”

From July 1 to Dec. 31, “we’ve shown maybe 35 to 40 second run films, probably 50 now if you include January,” Fortier said. “We’ve sold thousands of tickets,” even though “we went from doing 140 movies a week to one or two. Right now with the governor’s mandate, we’re only selling 70 tickets per show.”

Themed bookings have helped move those tickets. In November, the Grandin had a Harry Potter film festival. In December, the nonprofit booked Christmas programming and family matinees.

“Week after week in his one show, he had better growth than some of my other theaters with multiple screens operating a number of titles over the whole weekend, maybe not even doing as much as he did in one show,” Klingelhofer said. “That’s when I started telling my other clients, ‘Look, I’ve got this guy in Roanoke and here’s what he did and why you might consider it.’”

At the moment, naturally, the Grandin’s films are geared toward Valentine’s Day. “Moonstruck,” with Cher and Nicolas Cage, plays 7:30 p.m. Friday and “Sleepless in Seattle,” with Tom Hanks and Meg Ryan, screens 7:30 p.m. Saturday. Later in February the theme switches to Black History Month, with showings of “Hidden Figures” and “Akeelah and the Bee.”

A Grandin Theatre employee puts butter on popcorn. During the spring 2020 shutdown brought about by the COVID-19 pandemic, the nonprofit art house theater sold its popcorn curbside.

The pandemic is the latest of many challenges the Grandin has weathered since opening in 1932.