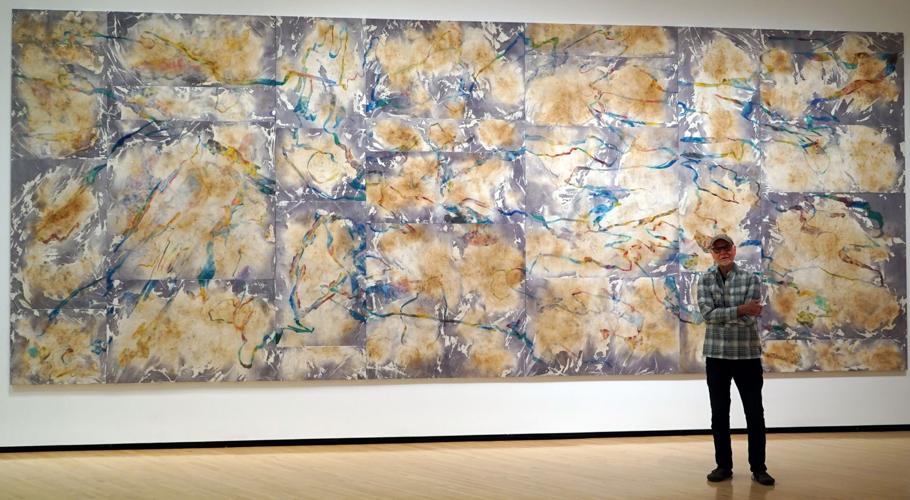 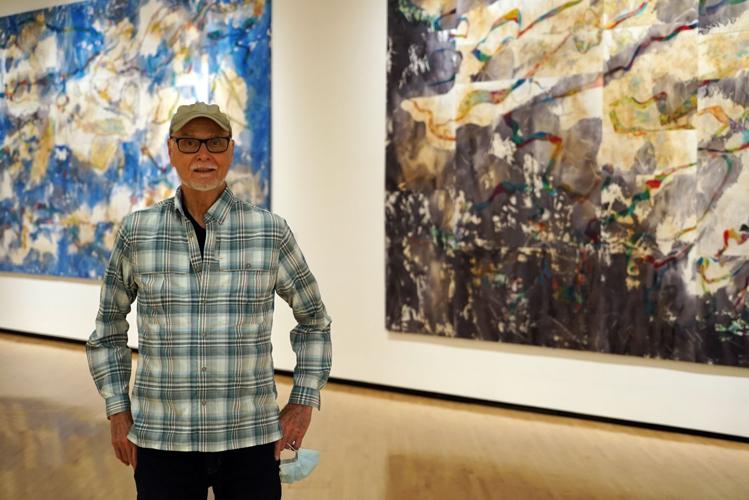 A New York native, Kass first came to Blacksburg in 1976. The retired Virginia Tech art professor has influenced the Roanoke and New River Valley art scenes for 40 years, not least because of the Mountain Lake Symposium and Workshop he founded and co-organized in the 1980s and ’90s.

The multipanel paintings, which use watercolor, oil emulsion, beeswax and other media, were all created through a complex process that involves both plotting designs on graph paper and leaving a number of elements up to chance. They’re so big that just four of them fill the walls of the Carilion Clinic Gallery in the Taubman Museum of Art. They range from 18 to 27 feet wide and 8 to 11 feet tall.

“They were all painted on the floor of my studio,” Kass said. “I don’t have a wall big enough in my studio to hang any of them.”

A retired Virginia Tech art professor, Kass has been an influence and inspiration in the Roanoke and New River Valley art scene for decades, in no small part because of the Mountain Lake Symposium and Workshop, a conference he founded and co-directed in the 1980s and ’90s that brought internationally renowned artists to Southwest Virginia to make art in collaboration with local volunteers.

Kass’ show at the Taubman, “riverrun: New Works by Ray Kass,” premiered in November and will close Aug. 16.

“It’s great for this time,” said Cindy Petersen, executive director of the Taubman Museum. “It’s very meditative. People can go through and sit and contemplate.”

Closed in March because of the pandemic, the Taubman reopened earlier this month with strict social distancing measures in place and reduced hours. The art museum in downtown Roanoke is open Fridays and Saturdays 10 a.m. to 5 p.m. and Sundays noon to 5 p.m. Admission is free.

Petersen said the museum has averaged about 300 visitors per weekend since reopening, hailing from 23 states.

Kass has been involved with the museum for more than 40 years, dating back to when it was known as the Roanoke Fine Arts Center and resided in a South Roanoke mansion called Cherry Hill. After the museum opened as the Taubman in 2008, Kass served for a time as an adjunct curator. By then he had retired from a 26-year career at Tech, though he continues to advise and offer internships to students.

In 2019, the Longwood University Center for the Visual Arts in Farmville premiered an exhibition, “Rural Avant-Garde: The Mountain Lake Experience,” about the Mountain Lake Workshop founded by Kass. The exhibition is still touring, and the University of Virginia has published a hefty book that Kass co-edited, “Mountain Lake Symposium and Workshop: Art in Locale,” which is on sale in the Taubman’s gift shop.

“It was the best midlife experience I ever had as an artist,” Kass said.

Kass uses those same methods in his own works, including those on display at the Taubman. In addition to the four “Notation” paintings, the show contains earlier artworks that show Kass gradually developing the techniques that went into making these large paintings, as well as examples of the materials he uses and a video showing the process he and his assistants use to add smoke stains to paper.

The patterns in these paintings that resemble the boundaries of lakes come from pieces of sycamore bark that Kass has found on his property alongside the Roanoke River in Montgomery County. Sycamores shed their thin bark in striking organic shapes like jigsaw puzzle pieces. Kass reproduces those shapes as large scale stencils that become part of his artistic process.

He has occasionally visited “riverrun” without revealing to visitors in the gallery that he’s the artist. He takes delight in the varying ways museum-goers have engaged with his paintings.

“I hope they see an aspect of the cosmos,” he said.

The museum in downtown Roanoke has also extended the closing date of “Celestial Centennial: The Art and Legacy of Dorothy Gillespie” until Sept. 13. For more information, call 342-5760 or visit taubmanmuseum.org.

Saturday, the combined History Museum of Western Virginia and the O. Winston Link Museum at 101 Shenandoah Ave. N.E. will reopen to the public, with social distancing guidelines in place. The photography exhibition “Light & Shadow” by Jimmy Deck remains on display. New hours will be Tuesday through Saturday, 10 a.m. to 4:30 p.m. Admission has been reduced to $3 for all categories, with children under 12 admitted free. For more information, call 982-5465, email info@vahistorymuseum.org or visit roanokehistory.org.

Out & About: Henry Rollins at Harvester

The Montgomery Museum of Art & History will celebrate a grand re-opening on Saturday, Oct. 1, from noon until 6 p.m. The 15,000 square-foo…

Out & About: 'The Diary of Anne Frank' at Mill Mountain Theatre

Mill Mountain Theatre will present one of history’s most important stories when “The Diary of Anne Frank” opens Wednesday at the Trinkle Mainstage.

Regional culture kicked into a big gear on Friday at the Taubman Museum of Art.

Comic made his name doing wild and painful stunts on "Jackass."

Shakira to stand trial on tax fraud charges in Spain

Shakira to stand trial on tax fraud charges in Spain

A New York native, Kass first came to Blacksburg in 1976. The retired Virginia Tech art professor has influenced the Roanoke and New River Valley art scenes for 40 years, not least because of the Mountain Lake Symposium and Workshop he founded and co-organized in the 1980s and ’90s.