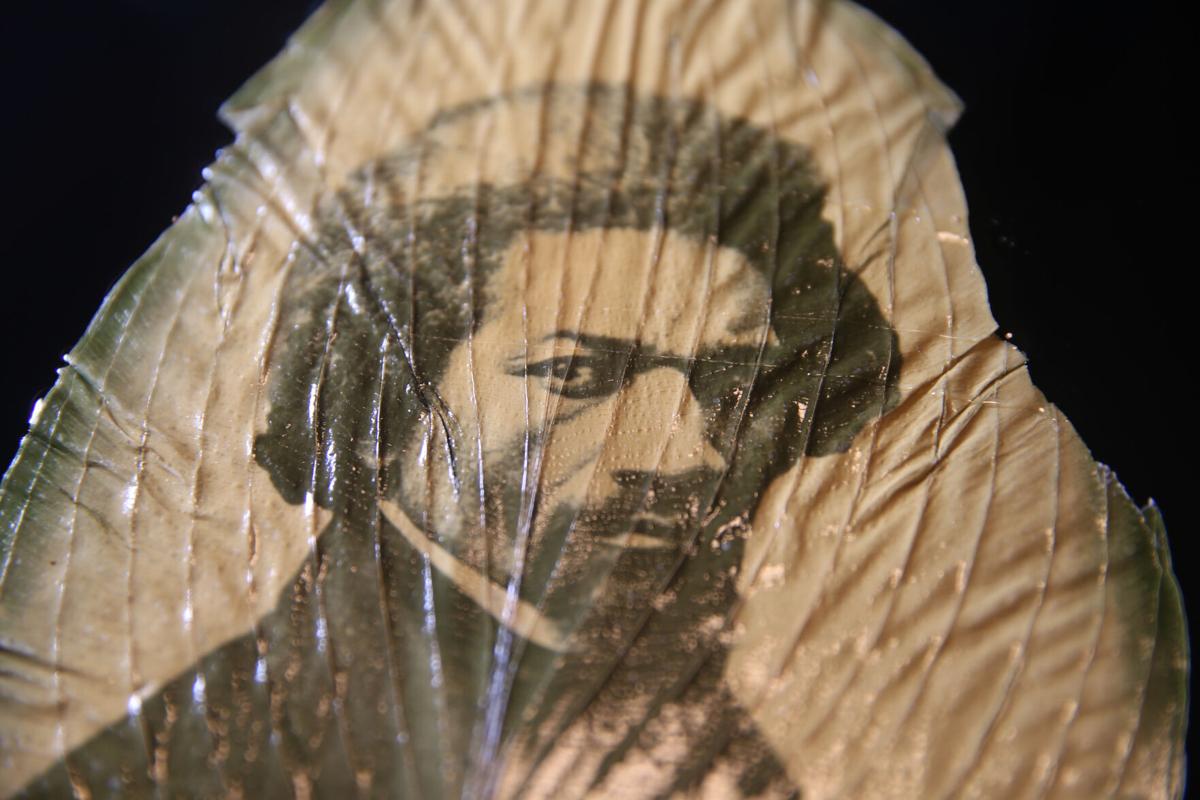 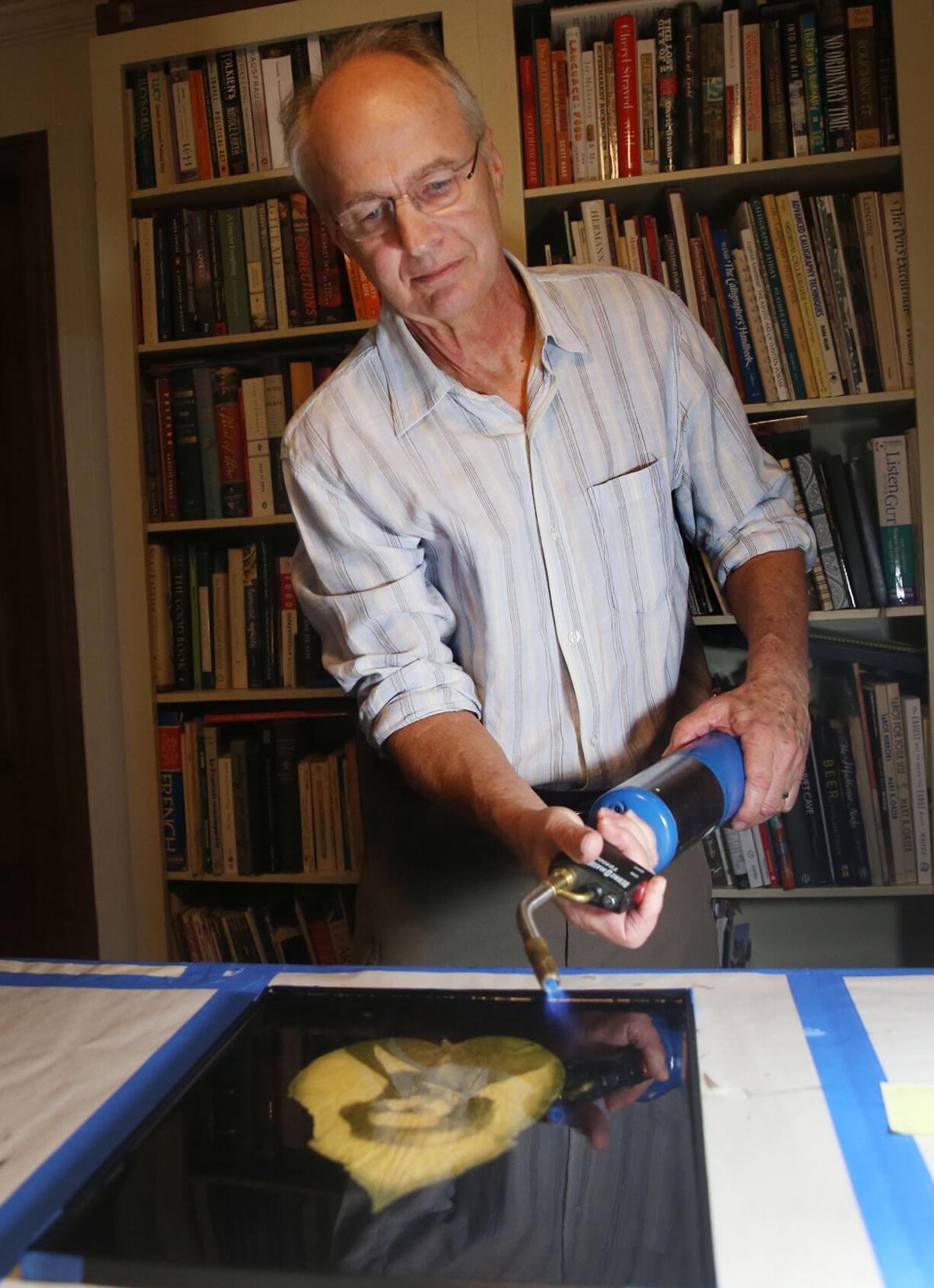 Robert Schultz uses a torch as part of creating his Memorial Leaves series, a response to Walt Whitman’s war writings. 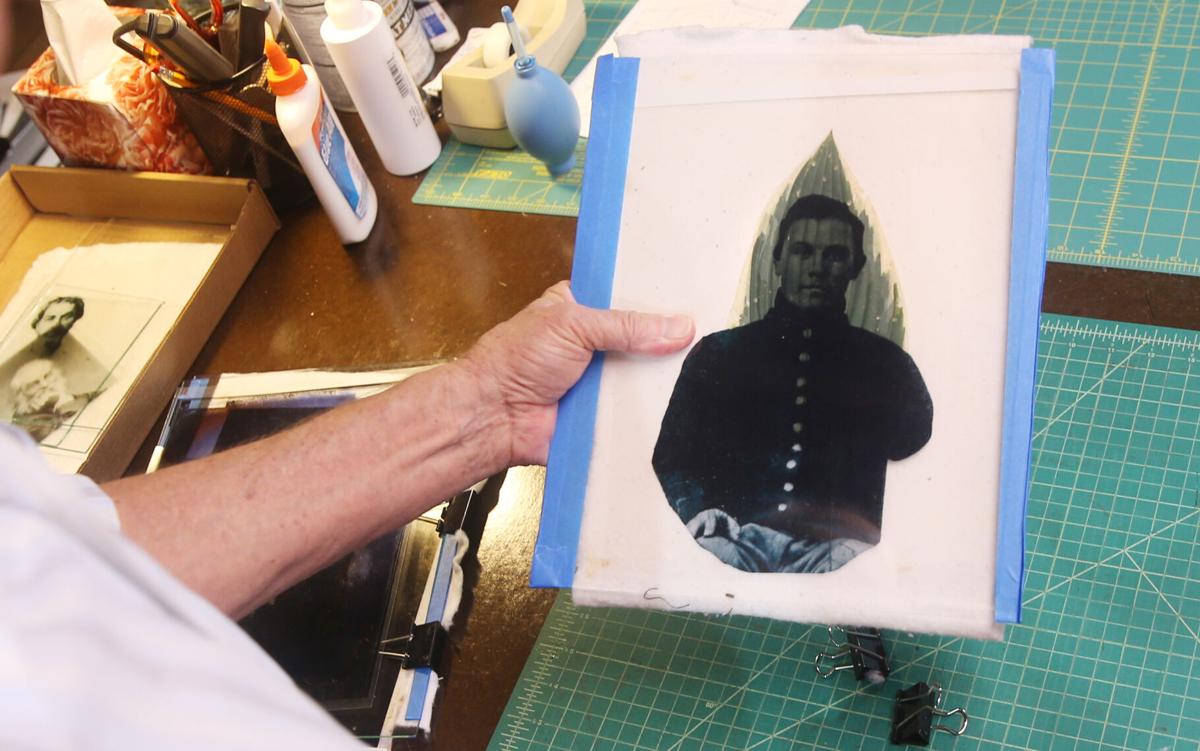 Robert Schultz shows the beginning stage of making a leaf portrait, using images from the U.S. Library of Congress, overlain atop a leaf and left to sit in the sun. 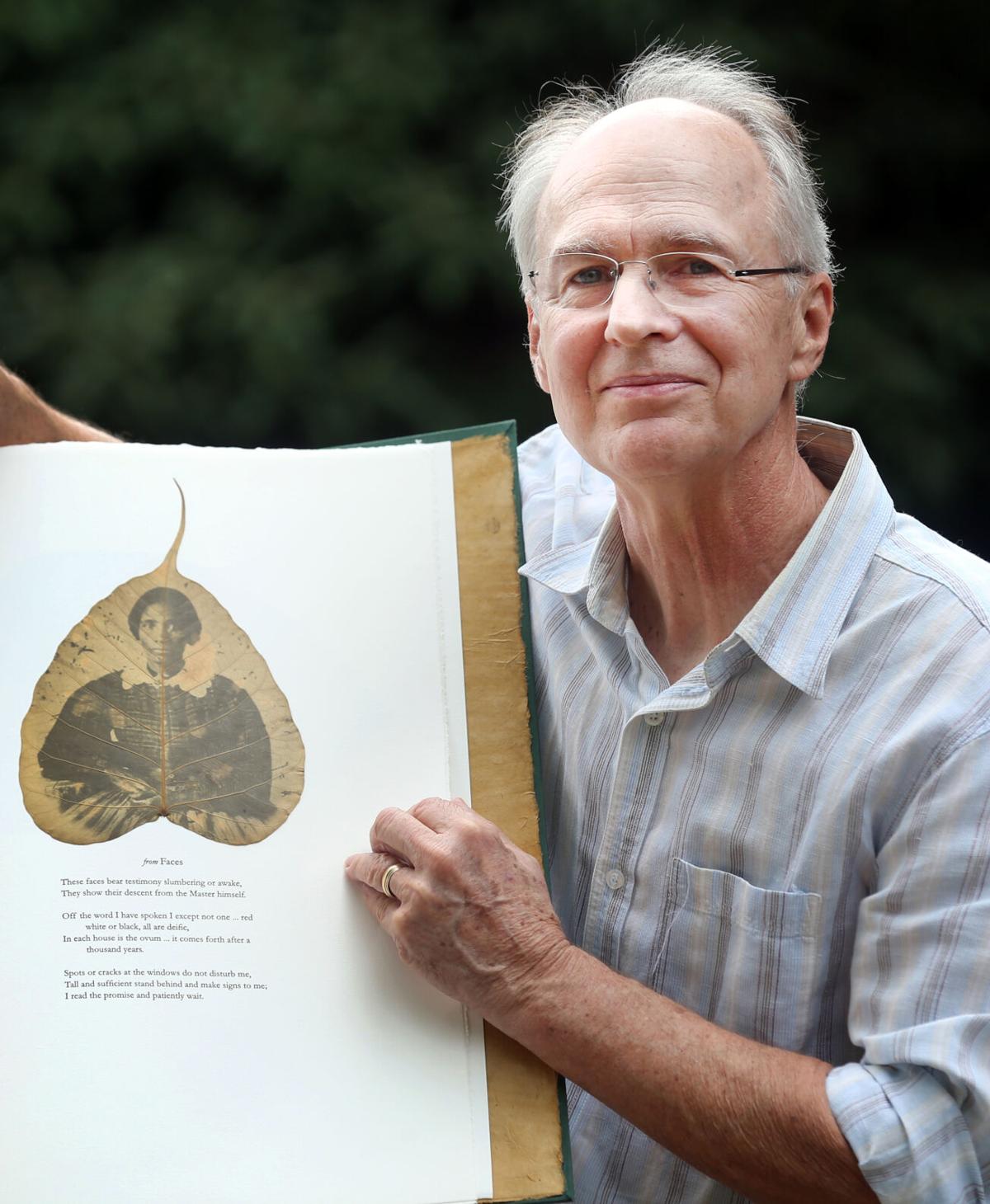 SALEM — Robert Schultz leaned over one of his latest photographic prints and fired up a blowtorch.

The print replicated a vintage photograph of 19th century American author Frederick Douglass, who escaped enslavement to become a federal marshal, newspaper publisher and abolitionist leader. The medium for the print was a leaf from a hosta plant.

After he had poured a thick resin over the hosta leaf print, the work ended up speckled by tiny bubbles. Schultz began to remove those bubbles using the heat from the blowtorch.

A poet and retired Roanoke College professor, Schultz, 70, has been making chlorophyll prints ever since learning the technique from the artist who invented it, Vietnam-born, California-based photographer Binh Danh.

His first solo art exhibition, “Memorial Leaves,” just closed in the Athenaeum Gallery in Alexandria. The show featured images of Black Union soldiers from the Civil War reproduced in leaves.

A Washington Post review of the exhibition said that Schultz “offers his prints as an alternative to the Confederate monuments that are finally being removed. It’s fitting that, rather than flaunt the solidity of marble and bronze, Schultz’s memorials appear as wispy and fragile as American unity.”

“As it happens, my subject matter is trying to make an exhibition that helps to memorialize the Civil War in a new way, that is less divisive and less controversial and more constructive, and it happens to coincide with all the Confederate ‘Lost Cause’ monuments coming down,” Schultz said.

Born and raised in Iowa, Schultz moved to Salem in 2004 to join the Roanoke College faculty. He first became aware of Danh’s work in the late 2000s. Danh earned national attention for his chlorophyll prints, created by placing transparencies over leaves and grass and leaving them exposed to the sun.

Images Danh has reproduced in foliage have included photographs taken by the Cambodian government of the victims of the Khmer Rouge, and Life Magazine portraits of American soldiers who died in the Vietnam War. Danh told the New York Times his purpose was to provide a new way to remember the cost of war.

“When I saw his leaves, I thought Walt Whitman, because it’s the whole trope of ‘Leaves of Grass,’” Schultz said. “Death goes into the ground and life emerges renewed from it.”

During the Civil War, contemplating the thousand of young men killed in battle, Whitman wrote, “the land entire is saturated, perfumed with their impalpable ashes’ exhalation in Nature’s chemistry distill’d, and shall be so forever, in every grain of wheat and ear of corn, and every flower that grows, and every breath we draw.”

Schultz corresponded with Danh and wrote poems in response to his work. After the two met at Hollins University and became friends, Schultz collaborated with Danh on a Taubman Museum of Art exhibition, “War Memoranda,” focused on the Civil War, that led to a book of the same name, published by the Taubman.

By the time of the Taubman show, Danh had moved on to other kinds of printmaking, so it fell to Schultz to create the new chlorophyll prints, with Danh’s assistance. “War Memoranda” focused on soldiers, their portraits acquired through the Library of Congress archives, rather than famous generals and politicians, a motif Schultz continued in “Memorial Leaves.”

Retired in 2018, Schultz has devoted more time to his newfound vocation as visual artist. He and his wife have even moved, not into a smaller house, but a larger one that afforded him a roomy basement studio. Since his retirement, he’s produced three books (in addition to “War Memoranda,” there’s poetry collection “Into the New World” and art book “Specimens of the Plague Year”) and participated in six group exhibitions in addition to the solo show in Alexandria.

He has begun experimenting with his chosen medium. An award-winning series of close-up digital images of the faces embedded in his leaf prints, “Being Seen,” resulted from his experience peering into those eyes from the past after he scanned the prints and enlarged them on his computer monitor, revealing fine details.

“Now I get to be a writer and an artist full time, and it agrees with me,” Schultz said.

Go to this story at roanoke.com/entertainment/arts-and-theatre to see video and a photo gallery.

M. Night Shyamalan will be the president of the 2022 Berlin Film Festival jury

M. Night Shyamalan will be the president of the 2022 Berlin Film Festival jury

The Halloween attraction created by Center in the Square haunts the site of the old American Viscose plant in Southeast Roanoke.

Amnon Weinstein, an Israeli violin shop owner and master craftsman, reclaimed his lost heritage by restoring instruments nearly lost during the Holocaust. A concert featuring some of those instruments is coming to Roanoke.

Out & About: 'Legally Blonde The Musical' at Mill Mountain Theatre

The black dress, the pigtails, the unblinking stare, the frighteningly flat affect and morbid obsession with torture, especially when inflicte…

Maybe it’s the catchy theme song, but whatever the reason, “The Addams Family” has had remarkable staying power over the years since the serie…

Robert Schultz uses a torch as part of creating his Memorial Leaves series, a response to Walt Whitman’s war writings.

Robert Schultz shows the beginning stage of making a leaf portrait, using images from the U.S. Library of Congress, overlain atop a leaf and left to sit in the sun.