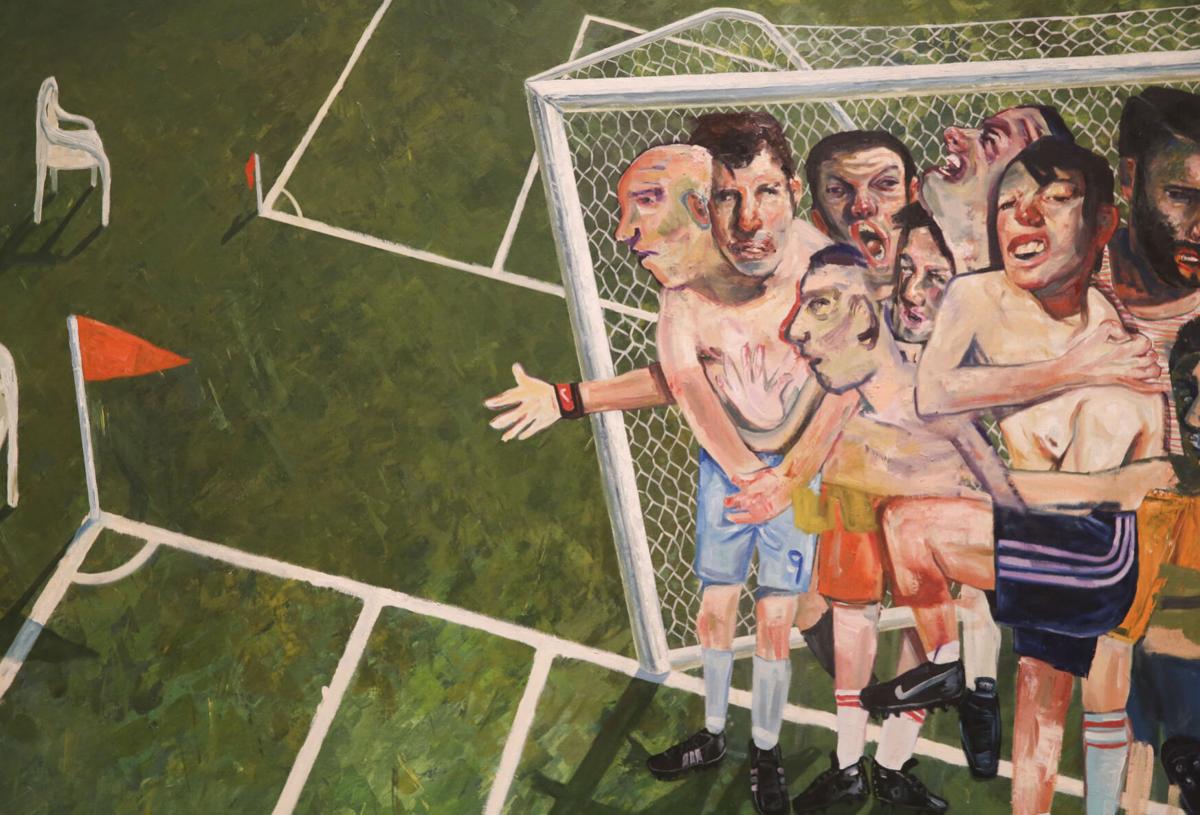 In this detail from Esteban Ocampo-Giraldo’s 2015 oil painting “Indirecto en el area [Indirect in the Area],” the Colombian artist depicts a dreamlike scene drawn from childhood soccer games. The work is featured in a new Taubman Museum of Art exhibition. 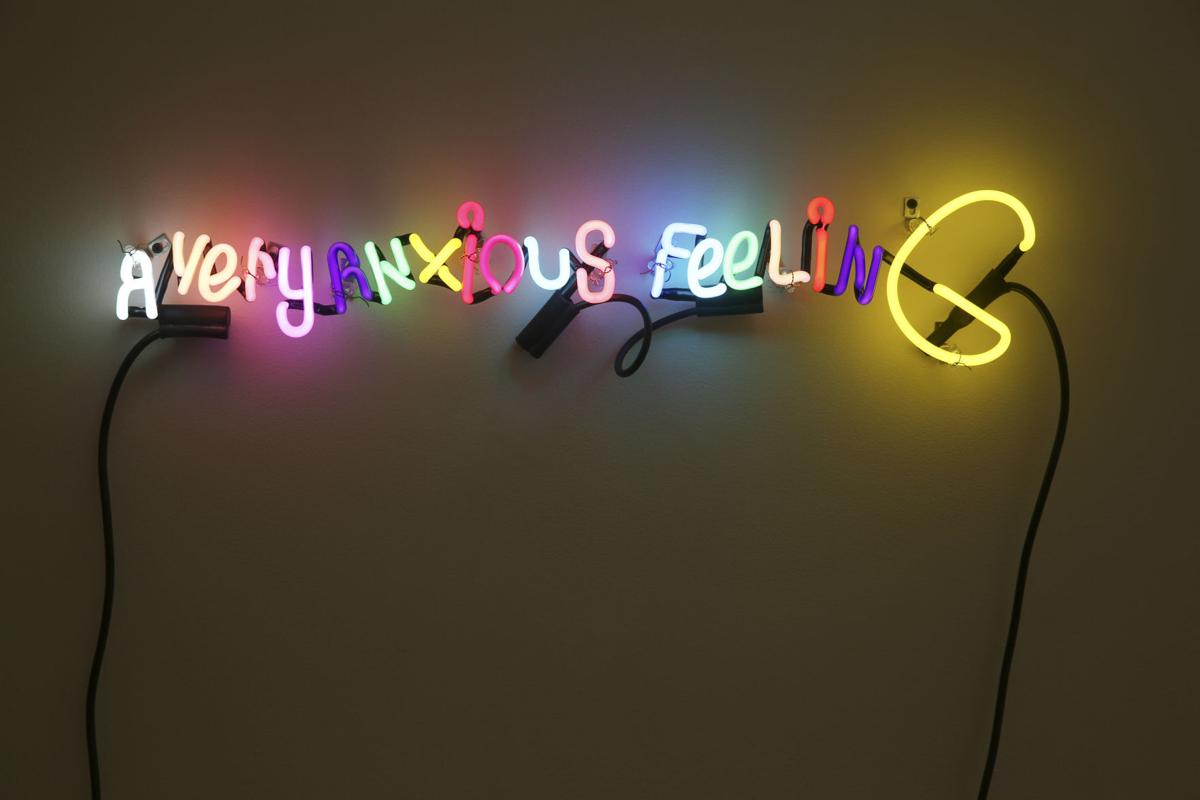 This neon tubing sculpture that gives the Taubman show its name was made by the art collective avaf, led by Eli Sudbrack and Christophe Hamaide-Pierson. 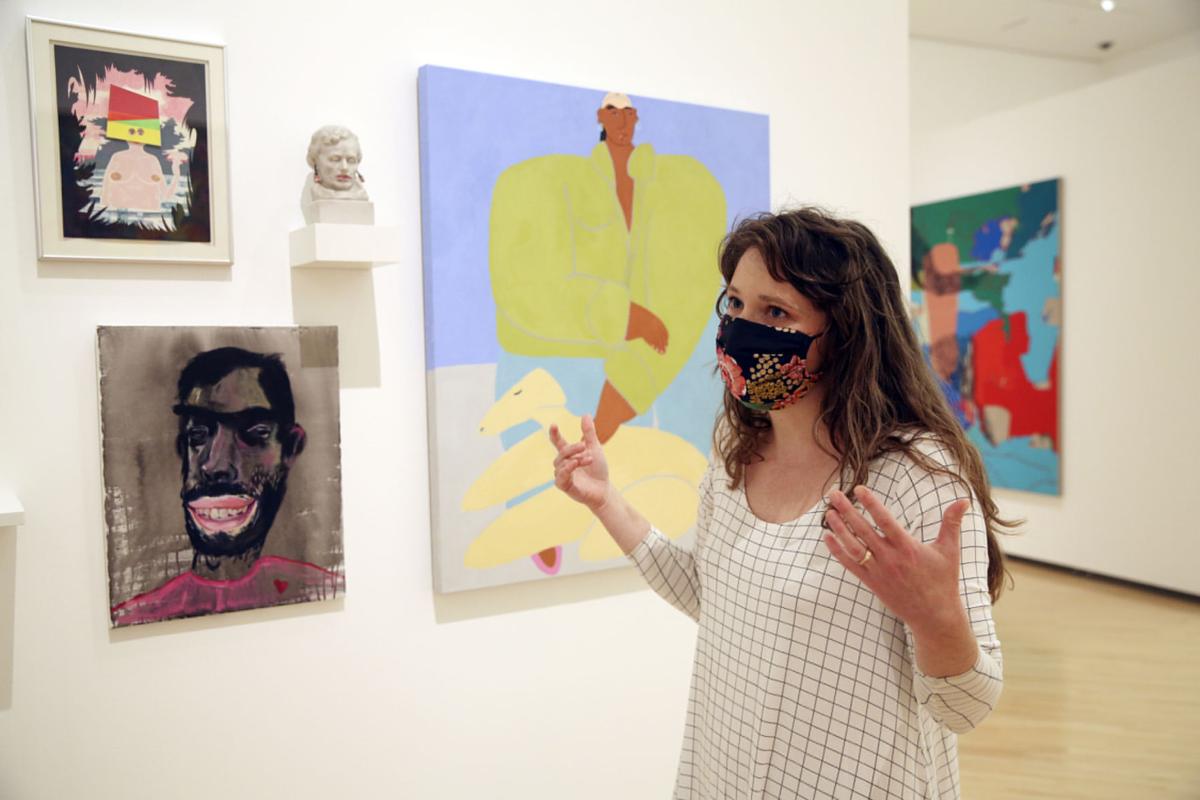 A new banner exhibition is up at Taubman Museum of Art, “A Very Anxious Feeling: Voices of Unrest in the American Experience.” Exhibition co-curator Amethyst Rey Beaver talks about some of the artwork Oct. 1. 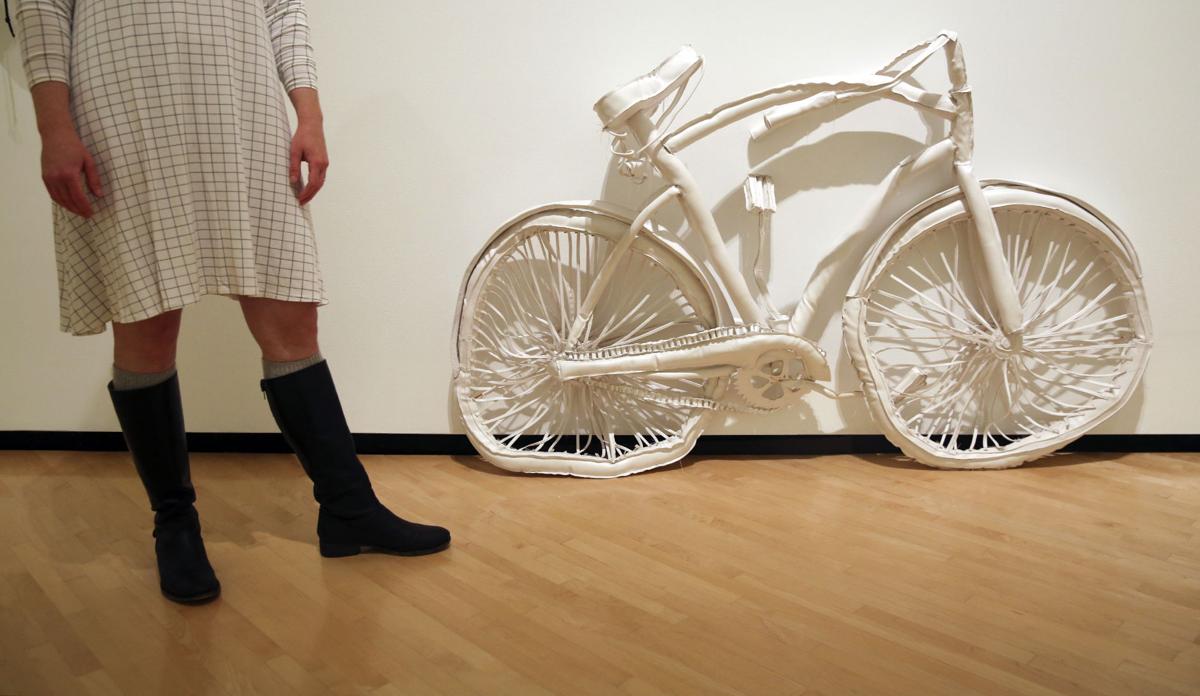 This bicycle made by Margarita Cabrera is made from vinyl, foam, string and wire. Cabrera’s sculptures often address issues of consumerism, labor, and migration. Exhibition co-curator Amethyst Rey Beaver stands by the sculpture.

The art collective avaf, co-founded by New Yorker and Brazilian native Eli Sudbrack, made the sign in 2007 as a commentary on the looming American presidential election of 2008.

That piece lends its name to a new exhibition at the Taubman Museum of Art — “A Very Anxious Feeling: Voices of Unrest in the American Experience” — that showcases creations by Latin American and Latinx artists living and working in the United States. Most of the works in the show were made during the past three years.

“All of these artists are absolutely teeing off on what’s still happening politically,” said co-curator Amethyst Rey Beaver.

These 70 works by 57 artists touch on subjects such as the plights of Latin American domestic workers, oppression of minorities, urban poverty and crime and the effects of trade agreements like NAFTA on labor and industries.

There’s also eye-catching color and a playful spirit throughout, exemplified by such works as Leonardo Benzant’s “Black Joy Takes Courage.” A son of Dominican immigrants in Queens, New York, Benzant assembled his piece using beads, string and leather in colors that evoke African and Afro-Caribbean jewelry and textiles.

The sentiment behind the piece is that in a system designed to undermine and oppress Black people, “showing joy is a form of resistance,” Beaver said.

The Taubman has ventured into new territory in its presentation, recruiting Virginia Tech students to write descriptions of the art in both English and Spanish.

All the exhibits in the show come from the collection of New York-based art collector Beth Rudin DeWoody, who has amassed more than 10,000 works of art over 51 years.

In a 2018 interview with The Roanoke Times, DeWoody said that she’s drawn to “artists that do things that are a little out there, that a lot of people wouldn’t show or buy.” The Taubman first showcased works from her collection that year in “Reclamation! Pan-African Works from the Beth Rudin DeWoody Collection,” another exhibition that combined playful, political and provocative elements.

DeWoody first came in contact with the Taubman through her friend of four decades, Joanne Leonhardt Cassullo, a Roanoke College alumna and fellow trustee of the Whitney Museum of American Art in New York. Cassullo, who is also on the Taubman’s board, directs the Dorothea L. Leonhardt Foundation, which is providing financial support for the show and for affiliated education programming.

The museum is putting together online programming to go with the show. “We’ll be doing at least two artist studio visits virtually,” Petersen said.

Beaver, a Louisville, Kentucky-based assistant curator for 21c Museum Hotels (a chain of combination hotels and museums focused on 21st-century art), brought her background in modern and contemporary Latin American art and a fluency in Spanish to the selection of works for the show, co-curating with the Taubman’s Eva Thornton. The theme that evolved focused on many different manifestations of anxiety.

That anxiety goes back further than the most recent presidential term and election cycle. Beaver highlighted a 1978 painting by Luis Cruz Azaceta, “The Striptease of Humanity,” that combines festive color with primal yet cartoon-like portrayals of extreme violence, reflecting the artist’s experience as a Cuban native who left his home country after Fidel Castro’s revolution and relocated to New York City, which was plagued with its own crime and unrest.

New York designer Sebastian Errazuriz, born in Chile, provides a grim meditation on the future of work with “The Useless Caste,” a tableau of 3D-printed miniature sculptures that resembles a crowd in turmoil, representing the workers in upcoming decades who could lose their jobs to automation.

Not every offering is quite so somber. A visitor might be forgiven for thinking a man is sitting casually in a gallery corner drinking a cuppa when they first glimpse Luis Flores’ “Morning Coffee.”

“It’s made out of crochet,” Beaver said. “It’s a self-portrait of the artist.” Flores has made other life-sized sculptures of himself engaged in WWE-style wrestling with his own doppelgangers, always using crochet, which he learned from his mother. “He’s also thinking about the materials that he’s using. Crochet is typically a handicraft that has not been considered fine art.” He’s also questioning the traditional notion of crochet as a craft practiced only by women.

Originally from the Dominican Republic, Firelei Báez gives a fierce, arresting gaze to the woman in her large portrait, “For Marie-Louise Coidavid, exiled, keeper of order, Anacaona,” features that are all the more striking because the figure is faceless, with a body containing flames. Pursuant to her goal of bringing the stories of women from Afro-Latina and Afro-Caribbean history to light, the portrait represents an amalgam of two individuals, one a queen of Haiti, one a poet and chief of her people who was executed by the Spaniards. No portraits from life of these women exist, only historical accounts.

One of the most moving pieces is Jose Alvarez’s lively mixed media work “The Promised Land,” made with paint, ink, mica, porcupine quills and bright-hued feathers.

Born Deyvi Orangel Peña Arteaga, he fled the homophobic violence of his home country of Venezuela in the early ’80s, and continued to live in the U.S. under an assumed name after his visa expired. In 2012, he was arrested by U.S. Immigration and Customs Enforcement and held for two months in Miami’s Krome Detention Center, an institution with a history clouded by accusations of human rights violations.

The artist was not deported, though many of the men he met and drew portraits of during his incarceration were. On returning home, he created “The Promised Land,” a work full of celebration. “It’s like what happens when you transcend the darkness and go to the light,” Beaver said.

Southwest Virginia Ballet Artistic Director Pedro Szalay, who is also from Venezuela, chose “The Promised Land” as the backdrop for a dance he performs in a video shot by the Taubman.

An interesting bit of trivia: Alvarez is married to his longtime partner James Randi, aka the Amazing Randi, who toured in the 1970s with Alice Cooper and later made many network television appearances in which he would debunk the supposed “powers” of self-proclaimed psychics.

The museum continues to operate under reduced hours, and has felt the economic effects of the ongoing COVID-19 pandemic in other ways. In August, with the expiration of the Paycheck Protection Program loans that were part of the federal CARES Act, the museum laid off five employees. “It was with a very heavy heart that we recently implemented a reduction in force here,” Petersen said.

The museum has also had to get creative in making changes to its exhibition schedule. Another new exhibition opened in August, “The Subtle Power of Photographs: A Private Collection.”

“As COVID hit, many of the exhibitions needed to be adjusted as we looked at the future, lots of shifting of exhibitions throughout the entire spaces,” Petersen said. Shows originally booked to ship from New York to the Taubman were postponed; artists who had planned to travel to the museum and set up installations chose to hold off.

The art museum reached out to regional partners and resources for help, among them Jenine Culligan, director of the Eleanor D. Wilson Museum at Hollins University, and art collectors Walter and Sally Rugaber.

The couple, who live in Meadows of Dan, started a photography collection with a focus on photojournalism about 20 years ago. Walter Rugaber, a retired publisher of The Roanoke Times and a former Hollins University president, met his future wife more than 50 years ago when they both worked in the Atlanta Journal newsroom.

The images span the mid-19th century through the 1960s civil rights era, with many taken during the Great Depression. Culligan curated “20th Century Photographs from the Rugaber Collection” for the Wilson Museum in 2019, and guest curated the new version of the show for the Taubman.

“One thing that’s fascinating in rethinking this show is how timely all of this is now,” Culligan said, with photos documenting economic hardship echoing “how COVID has affected communities, just the changes that are happening, families having trouble and trying to cope with things that are beyond their control.”

Petersen herself curated another new show, “In a Decade: Recent Acquisitions to Our Collection,” showing artworks the Taubman has acquired for its permanent collection within the past decade.

“A Very Anxious Feeling: Voices of Unrest in the American Experience”

On display through Feb. 7

“The Subtle Power of Photographs: A Private Collection”

On display through Jan. 10

“In a Decade: Recent Acquisitions to Our Collection”

On display through Jan. 3

A new exhibition at the Taubman Museum of Art showcases creations by Latin American and Latinx artists living and working in the United States.

In this detail from Esteban Ocampo-Giraldo’s 2015 oil painting “Indirecto en el area [Indirect in the Area],” the Colombian artist depicts a dreamlike scene drawn from childhood soccer games. The work is featured in a new Taubman Museum of Art exhibition.

This neon tubing sculpture that gives the Taubman show its name was made by the art collective avaf, led by Eli Sudbrack and Christophe Hamaide-Pierson.

A new banner exhibition is up at Taubman Museum of Art, “A Very Anxious Feeling: Voices of Unrest in the American Experience.” Exhibition co-curator Amethyst Rey Beaver talks about some of the artwork Oct. 1.

This bicycle made by Margarita Cabrera is made from vinyl, foam, string and wire. Cabrera’s sculptures often address issues of consumerism, labor, and migration. Exhibition co-curator Amethyst Rey Beaver stands by the sculpture.