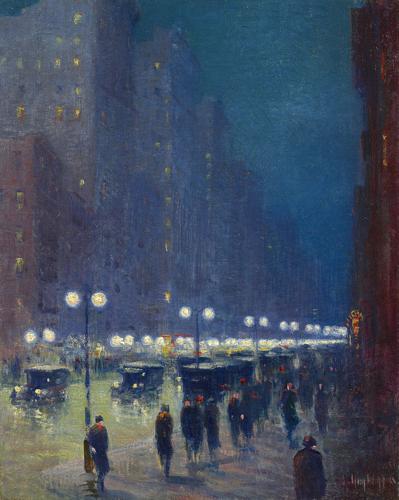 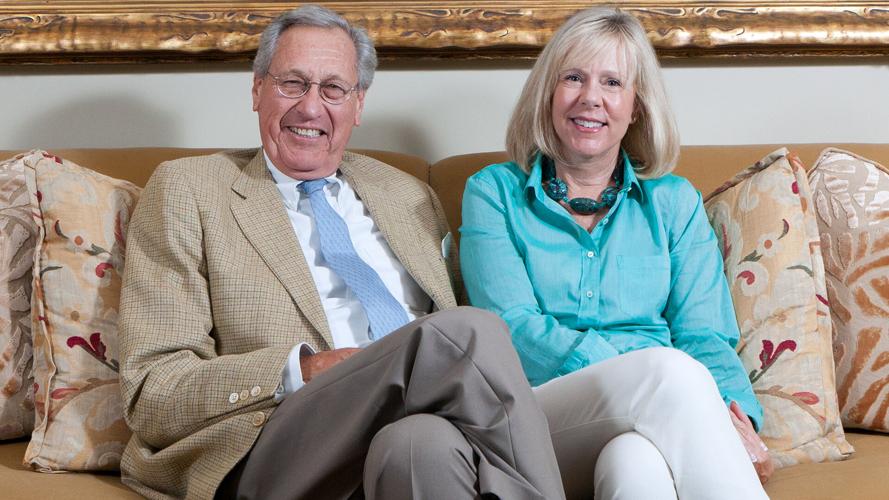 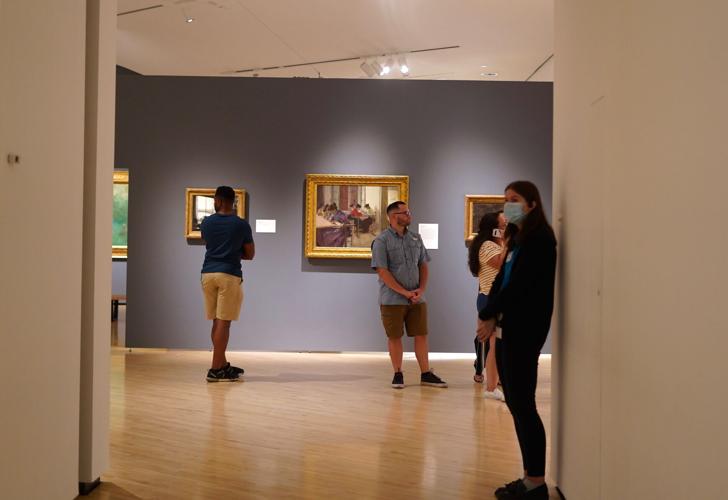 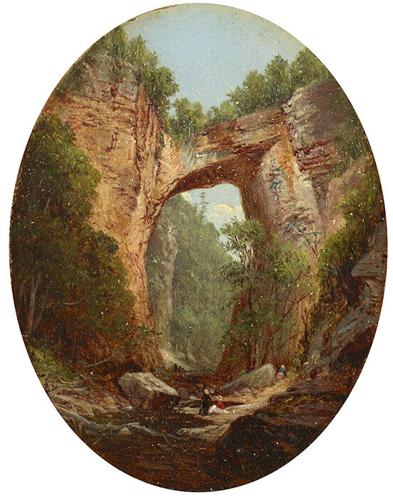 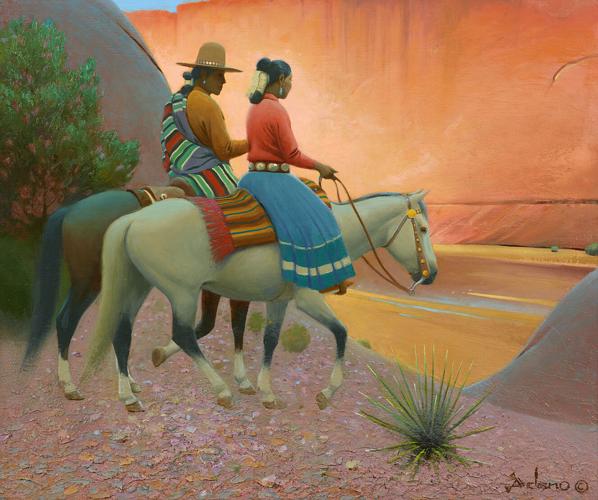 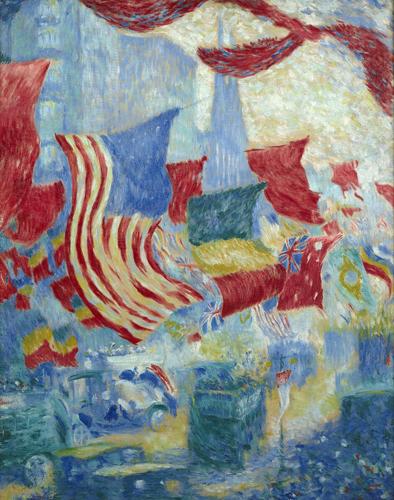 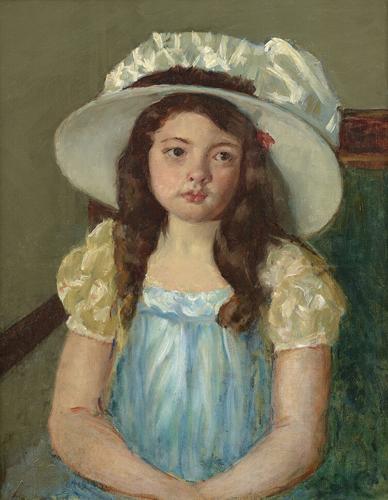 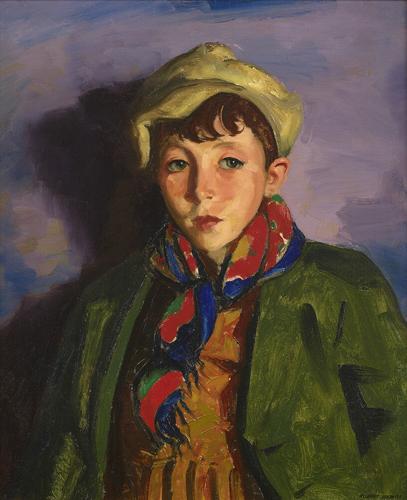 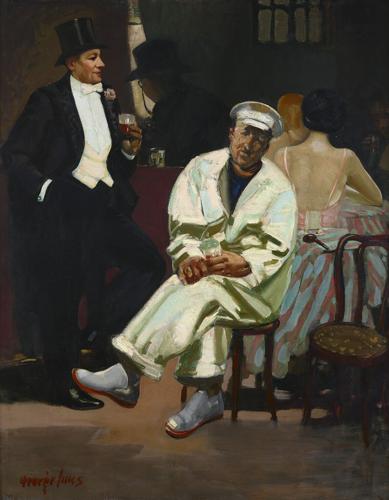 Art collecting began as an adventure in giving for two of Roanoke’s best-known philanthropists. But as years passed, Heywood and Cynthia Fralin’s own trove was growing.

The pair, noted for the 19th- and early 20th-century American art they own, are sharing more than 90 pieces with the public through a Taubman Museum of Art exhibit called Treasures of American Art: The Cynthia & Heywood Fralin Collection.

It has been on exhibit at the Taubman since May 13 and features 64 American artists’ works from 1861 to 1975. The Fralins formed the collection over more than a quarter century, and it is the first time that all of the works will be on view together.

“It truly began one purchase at a time and has included funny and unexpected moments along the way,” The Fralins wrote in an essay from the exhibition catalog.

Early in their journey, they almost missed out on a Robert Henri painting at a Christie’s auction because they were arguing over who would hold up the paddle during the auction.

“We were very excited about it, but we almost missed it because neither one of us could get the paddle to bid on it. It was about to be closed, and we finally reached the paddle and raised it; lo and behold, we got it,” Heywood Fralin recalled in a July 12 interview.

Buying to giveThe couple’s first purchases were actually for others rather than for themselves. When Heywood Fralin’s brother, Horace, died in 1993, Heywood and Cynthia Fralin arranged the purchase of four American art pieces for his widow, Ann. Later, Ann Fralin gave the couple one of them: “The Mary Powell at Newburgh” by Gifford Beal, which can be found in the exhibition.

The first time the Fralins bought a painting for themselves was in 1995. It was a scene from 1916 by William Wallace Gilchrist Jr., who painted his family having breakfast.

“I have a record of every one of them, except for that one because it was the first one, and I didn’t know I was going to buy anymore,” Heywood Fralin said.

In 2012, the couple donated a collection of American art to the University of Virginia, his alma mater. The school’s rector and board of visitors re-named the museum after them, in honor of the gift.

The pair’s love for American art, their relationships and their experiences fostered their adventure in collecting. Another key influence: Debra Force, an American art expert.

Force, who has appeared frequently on PBS’s “Antiques Roadshow” and owns a gallery on New York’s Upper East Side, specializes in works from the 18th to 20th centuries. She has almost 40 years of experience in the art world and has been the Fralins’ trusted right hand almost from the start of their collecting days. She bore witness to their passion and love for art.

“Once one has the bug to collect, it never dissipates,” Force wrote in an essay from the exhibition catalog.

The couple has benefited from Force’s expertise and advice for more than twenty years.

“Debra is a very knowledgeable individual,” Heywood Fralin said. “I realized that very quickly after we had met.”

The exhibition is broken down into six categories.

The Portrait, which touches on such issues as celebrity and intimacy, includes “Françoise Wearing a Big White Hat” by Mary Stevenson Cassatt, the only American painter to participate in earlier exhibitions of French impressionists, as the collection’s curator, Karl Willers, noted.

The Countryside focuses on rural landscapes and features marvels like “Old Mill, Marlborough on the Hudson” by George Inness, which possibly showcases one of the oldest Jewish Settlements in America — Gomez Mill House.

The Frontier contains pieces from such artists as Thomas Hart Benton, a pioneer of American regionalism, a school of painting that explored images of American Indian figures and the American heartland.

The Interior provides intimate and intricate glimpses into the world of labor and leisure. A notable piece in this category is “The Noble Experiment” by George Luks, a gigantic painting portraying a mix of social classes in a bar in the 1920s, at the peak of the Prohibition era.

The Coast shows beautiful paintings depicting New England coastal areas and beaches. This category features works from N.C. Wyeth — illustrator of Robinson Crusoe and more — his son, Andrew and grandson Jamie, the only living artist of this collection.

The sixth category is The City, displaying representations of city life — both bustling traffic and peaceful parks.

Georgia O’Keeffe, Fairfield Porter, and Grandma Moses are other great names in the exhibition.

In an essay from the exhibition catalog, Taubman executive director Cindy Petersen wrote that the collection mirrors “examples of groundbreaking moments in American art: impressionism of the late 19th century; figurative realism by a group of artists known as The Eight (also known as the Ashcan school) that arose in the early 20th century; and various illustrative styles and regionalist schools of art active in the United States from the late 19th century up to 1950 and beyond.”

The collection focuses on American works painted between 1890 and 1950, yet a few paintings fall outside that range. These include the stunning “Natural Bridge” by David Johnson, painted in 1861, chosen because of its specific Southwest Virginia subject, and a Winslow Homer watercolor from circa 1879, selected because of Homer’s significance in American art history.

When buying art, the Fralins have three non-negotiable criteria: Both of them have to like the piece; it has to be a well-respected American artist’s work; and it has to be educational for the community. As three James Madison University students — Haley Gillespie, Madison Treat, and Caitlin Fernandez — enjoyed the exhibition on July 16, it appeared that the Fralins met the latter criterion.

Gillespie and Fernandez, both graphic design majors, said they were happy to recognize a few names from their art history classes and identify locations depicted in some pieces.

“I really like when I recognize a place like the Roanoke River,” Gillespie said. “I was like, ‘I know that.’ And then, I love all the scenes in the mountains. I think it’s really pretty.”

Even after many years of discovering and collecting gems, the Fralins confess that the most memorable acquisition and the painting they most admire tends to always be the last one they purchase, which is what keeps them moving forward and continuing to collect.

“All the works in the collection are meaningful to us in one way or another,” they wrote in an essay from the exhibition catalog. “We have gathered the pieces in the collection first and foremost for our own pleasure and enjoyment, but with the idea that they would one day become teaching tools for future generations of students interested in American art.”

The Fralins advice to aspiring collectors: “… get good advice from experts and to purchase art you love, that you want to look at every day, and that will continue to excite you.”

The exhibition remains on display through Sept. 4.

Go to this story at roanoke.com/entertainment/arts-and-theatre to see video from the exhibit.