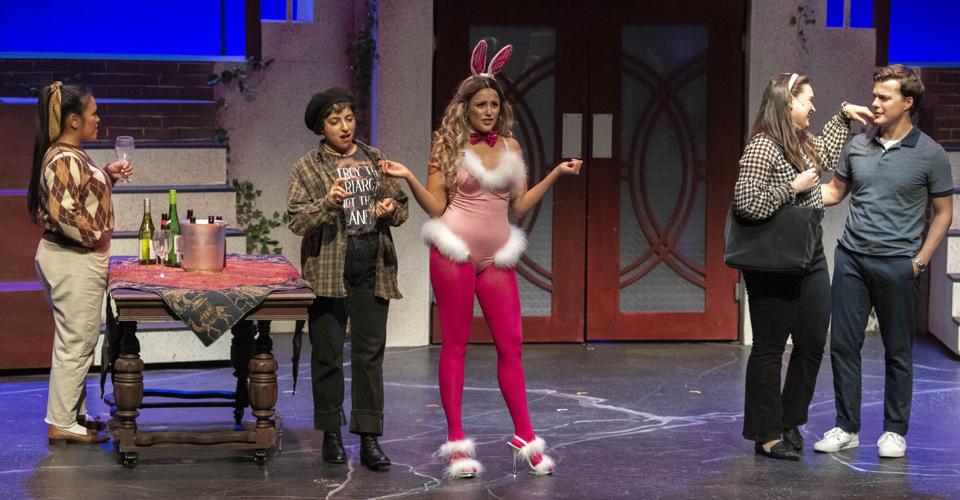 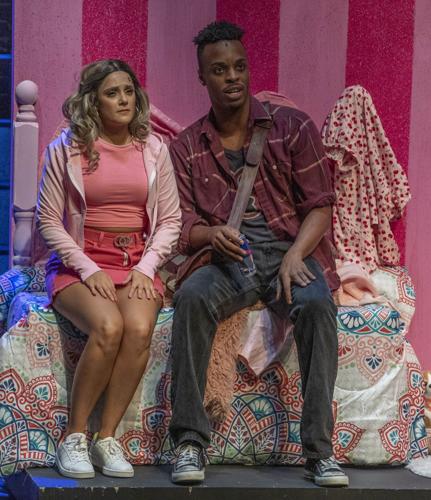 Twenty years ago, moviegoers were introduced to a perky California coed named Elle Woods, whose improbable acceptance to Harvard Law School, where she hoped to win back her boyfriend, wound up catapulting her to much bigger dreams.

Amid a growing new-millennium trend of Hollywood films being adapted to the stage, it’s little surprise that the theater world took notice of this endearing storyline, and in 2007 “Legally Blonde: The Musical” opened on Broadway.

The good news for fans of the movie is that there’s plenty to love about the stage version — like a college reunion where you get to spend time with old friends again.

For newcomers, don’t let all that pink fool you — this is a David-vs-Goliath story.

All the key plot points are here (sometimes with a few adjustments): the break-up scene in the restaurant that launches Elle’s quest; the cramming for the LSATs; the awkward first meeting with her brainiac fellow students; and so forth. Small, efficient set changes anchored by one multi-level, multi-tasking backdrop transport the audience to the many locations where the action takes place.

Moving the story along are almost 20 musical selections featuring snappy, cleverly crafted lyrics that fill in the narrative. One standout among many is Act I’s “Blood in the Water,” in which Professor Callahan, played by Andrew Mauney, schools his new students about what being a lawyer is really all about. Many of the songs are also accompanied by exuberant dance numbers, skillfully choreographed by director Kristen Brooks Sandler. Longtime fans will appreciate the expanded treatment of the memorable “Bend and Snap” scene in the beauty parlor.

In her Letter from the Director, Sandler writes, in part: “This show presents as a bubbly bop comedy but is actually an exploration of some of the same issues we face today … It was inspirational to view the show through a contemporary lens as opposed to a Y2K time capsule….”

One impact is on the casting, which strikes a note of diversity barely hinted at in the film, and which has resulted in an engaging ensemble.

As Elle, Lisa Graye is an adorable dynamo who will have the audience cheering her transformation from Valley Girl to champion of justice. And her solo performance of the tune “Legally Blonde,” where she despairs of her law school dream (leaving out a potential plot spoiler here), is much more heart-wrenching than the same scene in the film.

As one of the men in her life, Logan T. Sutton rocks a shallow East Coast prep school vibe as Warner, the boyfriend who thinks he’s too good for her. Meanwhile, Andre Hinds brings warmth and gravitas to the reimagined role of Emmet, who forms a blossoming friendship with Elle.

Erin Kei does a lovely turn as Vivienne, whose relationship with Elle undergoes a metamorphosis by the end of the show.

Two of the key performers are double-cast. Amy Baldwin is tasked with portraying both the frumpy hairdresser Paulette as well as the hyper-fit aerobics queen Brook Wyndham. But between the costume department and her acting chops, Baldwin pulls it off.

Also working a second role is Mauney who, in addition to playing the icy Callahan, portrays the beefsteak UPS guy Kyle (Paulette’s love interest), and Mauney’s comic presence grabs the audience from his first entrance.

A fine team of supporting players with outstanding vocals and sharp dance skills rounds out the troupe.

The show is on the longish side, about two-and-a-half hours overall. Patrons should note that both non-vaccinated and vaccinated persons will be required to wear masks throughout the performance — a small concession to make in exchange for the return of live theater to the Mill Mountain stage.

It’s always an exercise in flexibility to experience an artistic work in more than one form, and as Sandler notes in the program: “I invite you to release your typical expectations and go with us on a whole new ‘Legally Blonde.’ But don’t worry … it’s still fun, hilarious, and COVERED in pink!”

224-1200, millmountain.org, in-person at Center in the Square box office

Every scene needs rock-solid supporters. The Roanoke Valley lost one this week.

EXPLAINER: Drag queens and how they got pulled into politics

A group of protesters stood outside the yard at Sweet Donkey Coffee Shop on Saturday, holding signs in response to an all-ages-welcome drag show there. Multiple Facebook posts in the weeks prior registered both anger about and support for the business and its event.

Music scholar and musician Gary Reid has dug deep into mountain music legend Carter Stanley’s story and brings it back to a life on Saturday. …