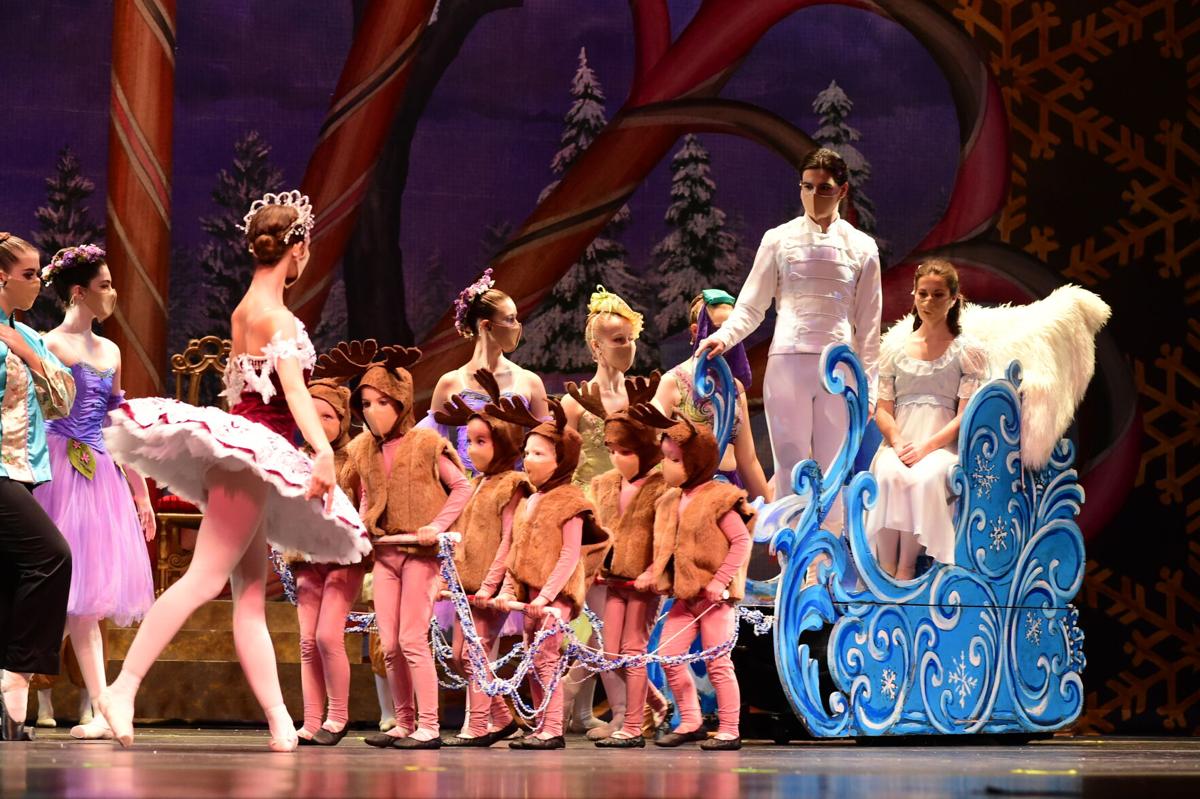 A scene from Southwest Virginia Ballet’s virtual production of “The Nutcracker,” with performers wearing masks. 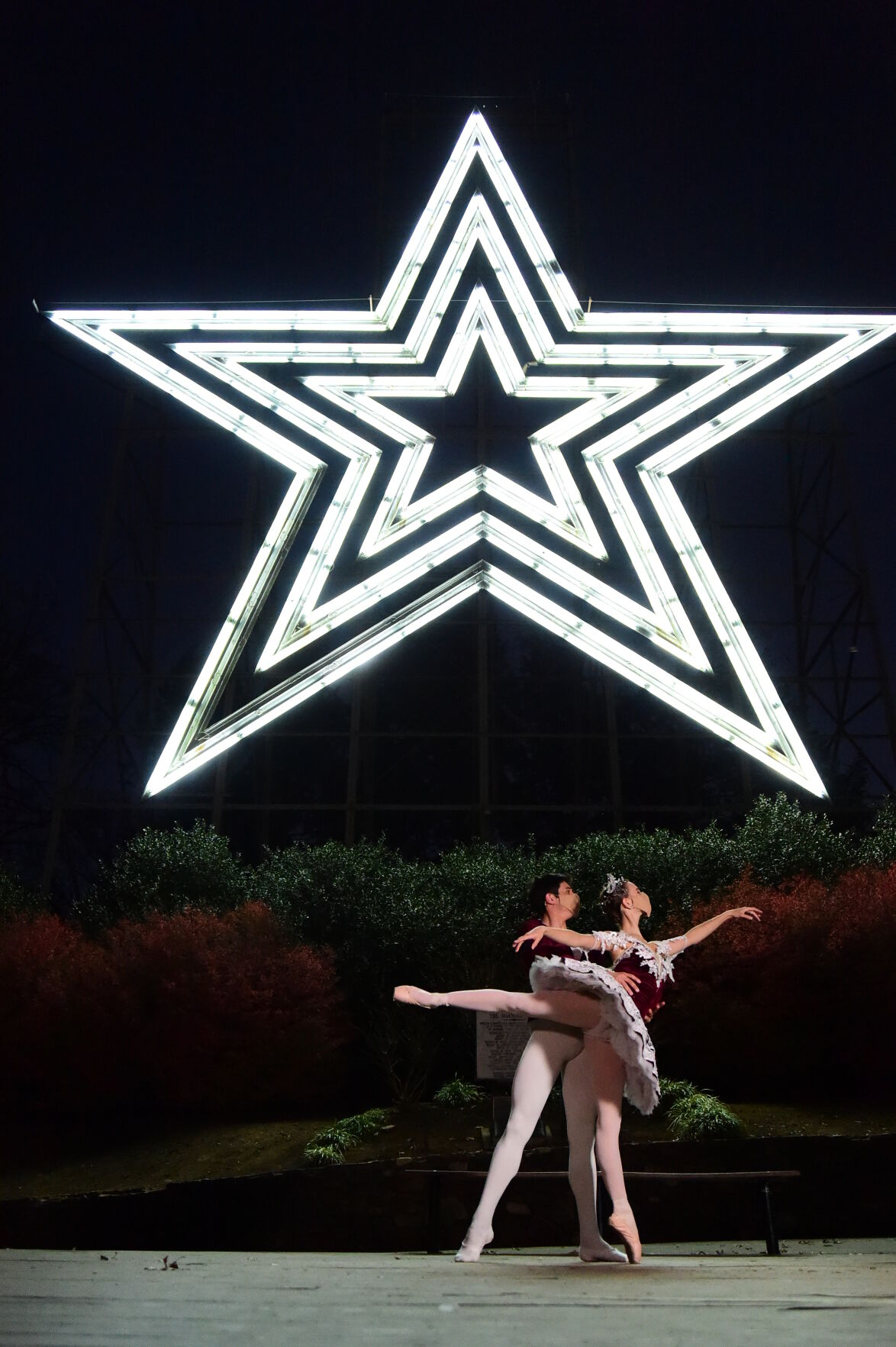 Working with Blue Ridge PBS, Southwest Virginia Ballet shot portions of "The Nutcracker" at sites like the Roanoke Star. 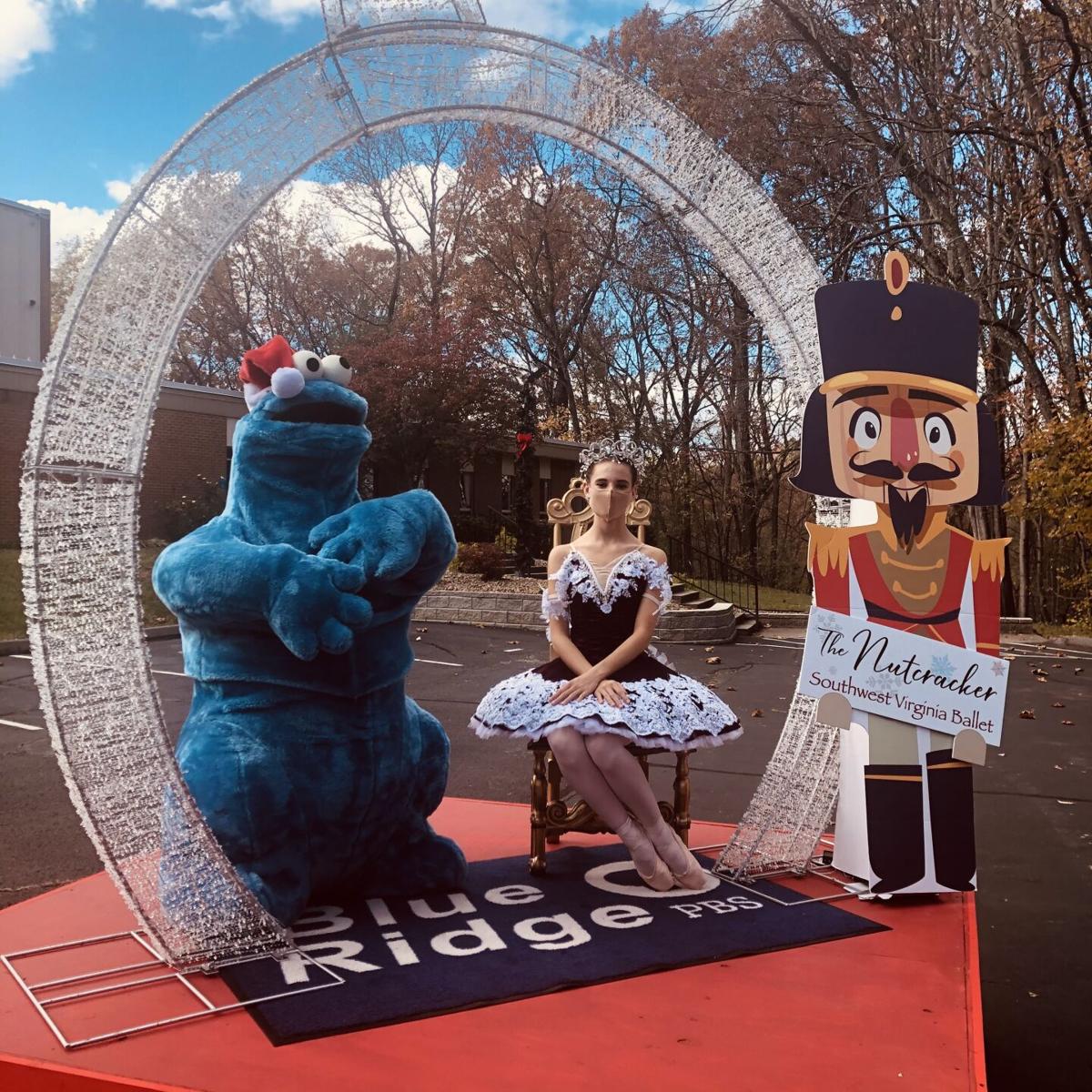 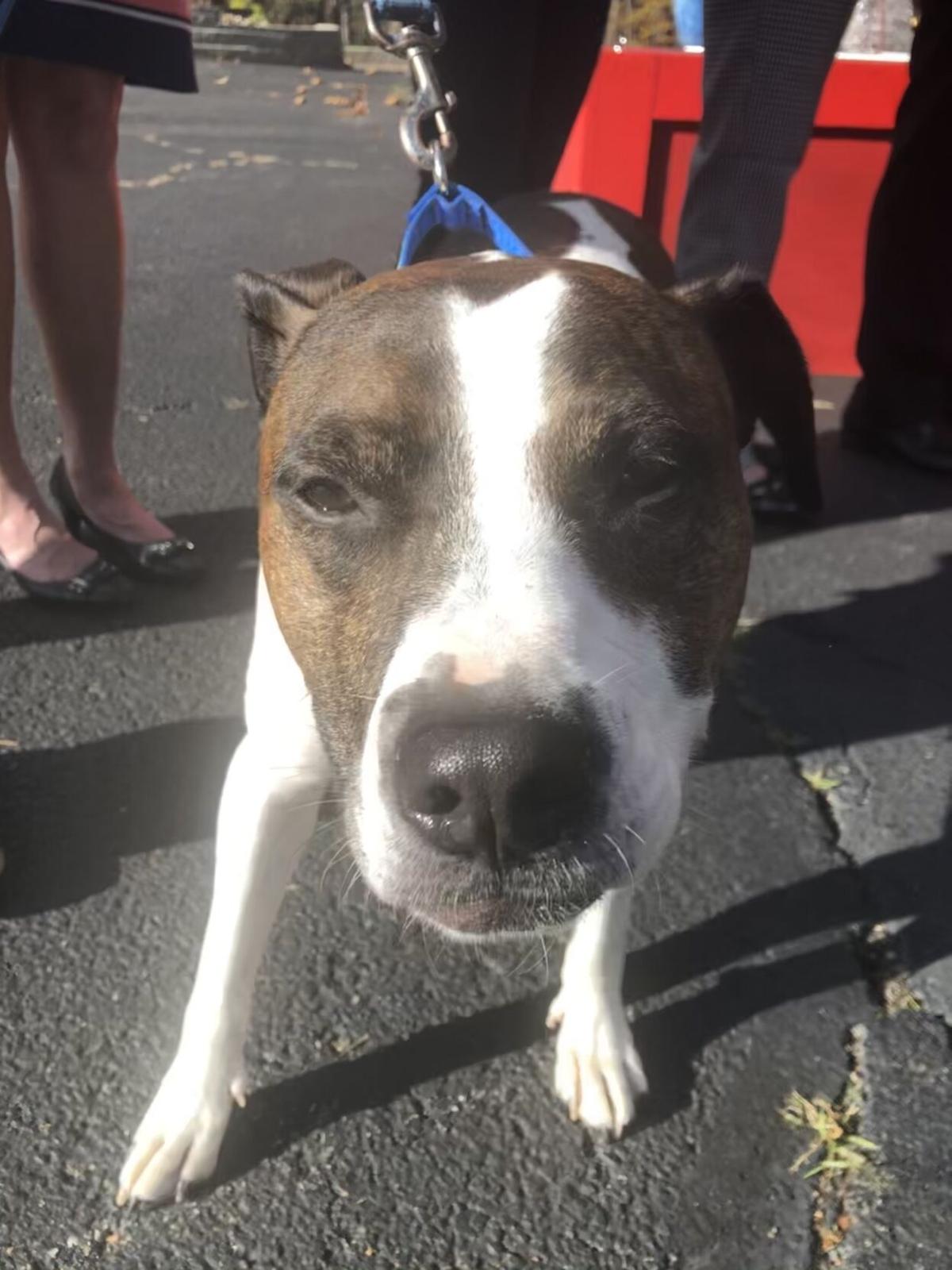 Hank, a pit bull mix adopted out by Roanoke animal shelter Angels of Assisi, has a role in Southwest Virginia Ballet's "Nutcracker" video.

Updated Nov. 20, 2020, 5:15 p.m.:The Roanoke Symphony Orchestra has canceled its upcoming live events due to the rise of COVID-19 cases in the area but still plans to share virtual performances this holiday season.

A time-honored Roanoke holiday tradition will be coming to television screens in December instead of being confined to a Berglund Center stage.

Were it not for the COVID-19 pandemic, Southwest Virginia Ballet would be preparing to mark the company’s 30th annivesary by rehearsing for its 29th production of “The Nutcracker” at the Berglund Performing Arts Theatre.

Instead, the show is already over — at least the parts where the ballet dancers do their thing. The resultant footage is in the process of being edited for a broadcast on Blue Ridge PBS (WBRA-TV, Channel 15).

“We’re happy to bring it to all of you,” said Blue Ridge PBS President and CEO Will Anderson at a Tuesday press conference held at the station. “It’s our gift to the community.”

“Pedro has really been the inspiration behind all this, he’s our creative source,” said SVB Executive Director Carol Jessee.

His leadership led to “a true collaboration in the arts community,” she said, with scenes shot on video in Hotel Roanoke and the Taubman Museum of Art and by the Roanoke Star, as well as on the Berglund theater’s stage.

“We wanted to bring all the community together and make a showcase of our beautiful region,” Szalay said.

The SVB dancers, per regulations, danced their parts “all with their masks on,” Anderson said. “They performed it multiple times for us, multiple takes, multiple cameras, six cameras including a drone.”

The video will be made available in schools, hospitals and senior communities, Jessee said. Also, through the Roanoke PBS station’s streaming service, the video will be available “to many thousands of people who would not have been able to see ‘The Nutcracker’ even if we were live at the Berglund Center,” she said.

Ticket sales for “The Nutcracker” comprise the bulk of the Roanoke-based nonprofit ballet’s income. SVB is looking to offset that loss by offering sponsorships for the “Nutcracker” broadcast, Jessee said. “We have found that people are craving the arts and that they want to be a part of a success story and that is what we are producing.”

“It’s such a tradition,” Schon said. “I know people who drive from all over the state to come to see ‘The Nutcracker’ every year. It’s like if they don’t see it, something bad’s going to happen. It’s a tradition.” In discussions with Szalay and Jessee about how to keep the tradition going, “the wheels started turning. Everybody else is doing something virtual, why can’t they do it?”

Regarding Schon’s proposal, “we said absolutely,” Anderson said, citing the station’s commitment to the regional arts. “It was a no-brainer.” Additional partners recruited included the Taubman, the city of Roanoke, Hotel Roanoke and Visit Virginia’s Blue Ridge.

Roanoke animal shelter Angels of Assisi also contributed a performer to the video: a pit bull mix named Hank, a recipient of the nonprofit’s Biscuit Fund for abused and neglected animals, who has been recently adopted. Hank, present at the press conference, did not address the audience, but snuffled this reporter’s cellphone camera in friendly fashion.

Roanoke Symphony Orchestra has announced a series of live and virtual performances for the months of November and December. At the live performances, social distancing and mask wearing will be required.

The scheduled live performances are:

Virtual broadcasts in the works include “Christmas Concerto with RSO Virtuosi,” “Holiday Brass” and “Holiday Pops from the Vault,” which will be an airing Dec. 19-20 of a past RSO performance at the Moss Arts Center in Blacksburg.

Note: For the Dec. 13 airing, a watch party will be held at the Grandin Theatre in Roanoke. Admission $15, children 12 and younger $8.

The show will also be available on the Blue Ridge PBS “Blue Ridge Streaming” YouTube channel Dec. 11-13 and on later dates.

We welcome once again to this column country music band Old Dominion, whose Matthew Ramsey and Whit Sellers come from Botetourt County.

On Tuesday, the Oscar-nominated star of movies like "Juno" and "X-Men: Days of Future Past" shared with fans that they are transgender and identify as non-binary.

NASHVILLE, Tenn. (AP) — Country singer Jimmie Allen continues to rise on the charts, but he can’t think about his own success without giving praise to one of the stars who paved the way for him: country music trailblazer Charley Pride.

As a songwriter, singer Ingrid Andress discovers her voice

NEW YORK (AP) — In a songwriting session with a group of rappers, which Ingrid Andress was attending to help write a hook, the conversation turned to immature guy talk about “all the different girls they had.”

See what's happening online and in person this week in the Roanoke and New River valleys.

Valerian and the City of a Thousand Planets - Luc Besson

This week on our film podcast 'Just to be Nominated,' we're talking about Mockumentaries!

Because everything is just so stressful these days, this week on our film podcast 'Just to be Nominated' we're talking about lightening thing up with our favorite mockumentaries! Listen all the way at the end, a very special guest!

Live music in the valleys and beyond...

New this week to TV, streaming and more: 'I Am Greta,' Chris Stapleton and CMA Awards

Here's a look at what's arriving on TV, streaming services and music platforms this week.

Santa's 'hometown' opens to the public as lockdown ends

Santa's 'hometown' opens to the public as lockdown ends

A scene from Southwest Virginia Ballet’s virtual production of “The Nutcracker,” with performers wearing masks.

Working with Blue Ridge PBS, Southwest Virginia Ballet shot portions of "The Nutcracker" at sites like the Roanoke Star.

Hank, a pit bull mix adopted out by Roanoke animal shelter Angels of Assisi, has a role in Southwest Virginia Ballet's "Nutcracker" video.