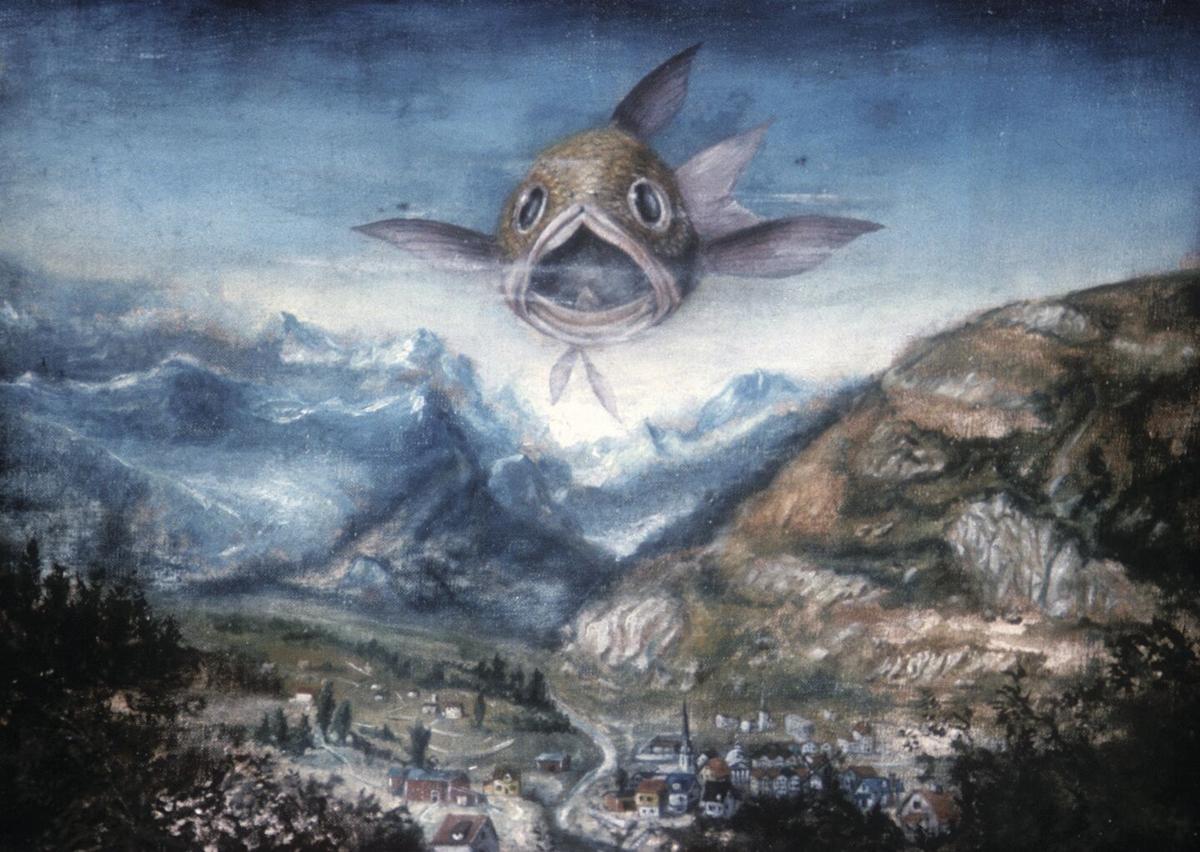 “Coming of the Great Fish” by Donald Nield, a New York surrealist who is getting his first major solo exhibition at Roanoke College 37 years after his death. 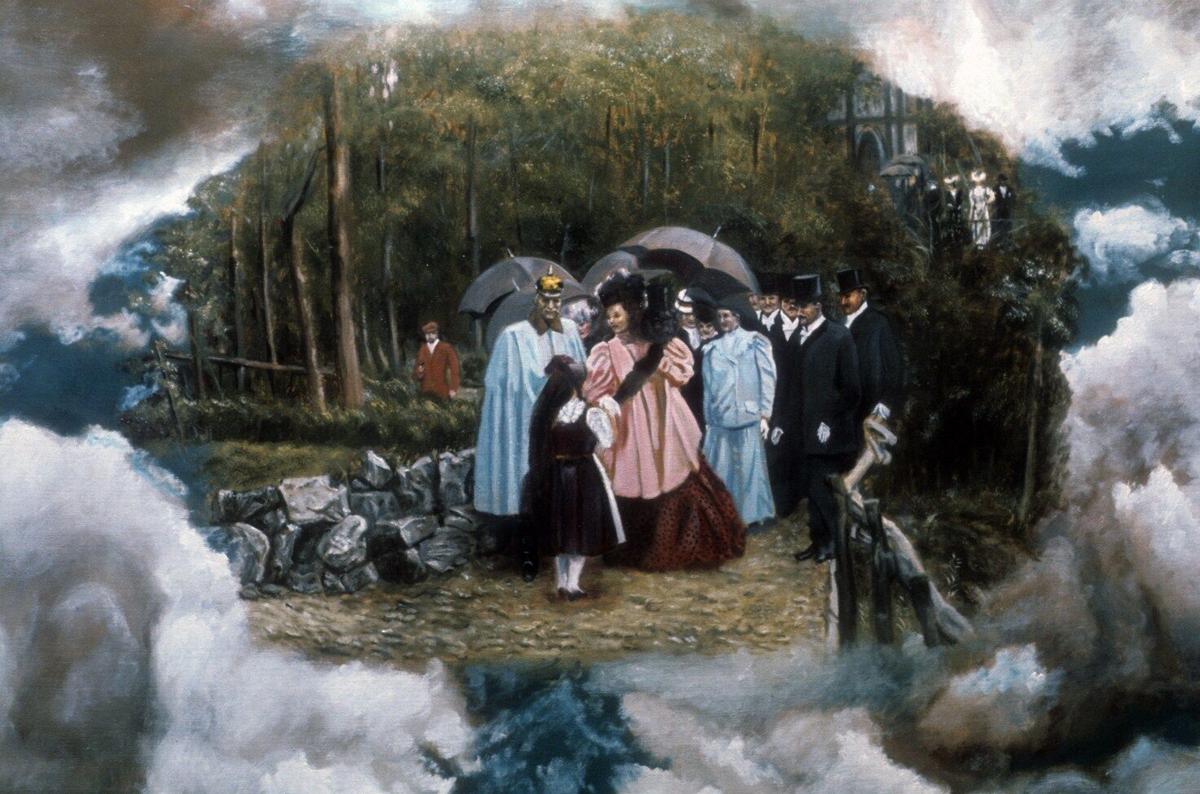 ABOVE: “Red Assassin” by Donald Nield presents a dreamlike reimagining of the assassination of the Austrian Archduke Franz Ferdinand — the event that set World War I in motion. Artist Donald Nield’s first solo show is opening Sept. 10 in Roanoke College’s Olin Hall Galleries — 37 years after his death. 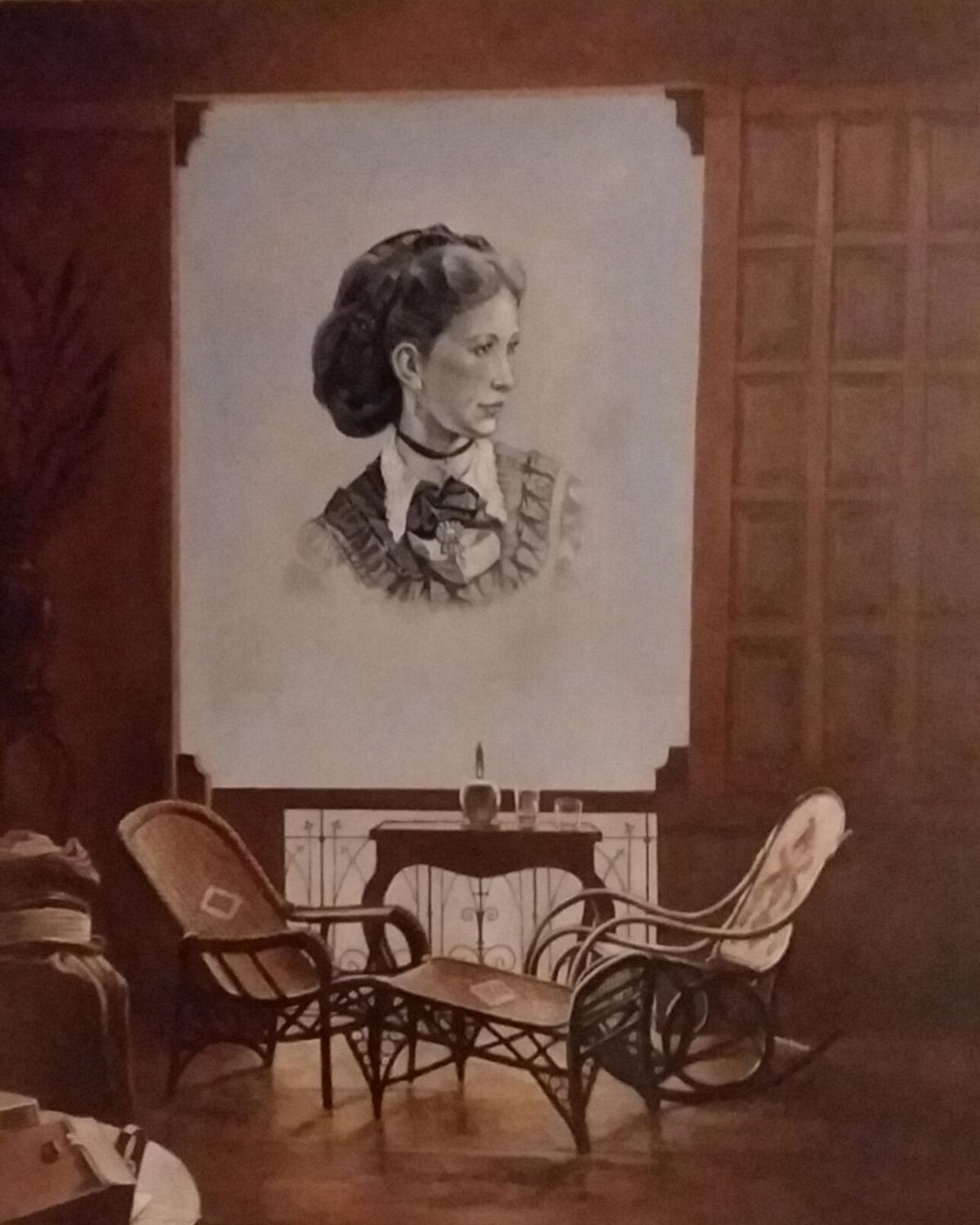 “Portrait Through the Balcony” by Donald Nield. The artist studied the techniques of the old masters at a time when the art world was focused on minimalism and abstraction. See Arts & Extras, Page B8

At the time, they both lived in an apartment building in New York’s East Village.

“My sister and myself and a friend were coming up the stairs,” Kargl said. Two men barreled past them and turned to confront Kargl’s friend, one of them holding a gun. Not seeing the gun, “I blew my police whistle,” which caused people to pour out of a nearby apartment, brandishing pots and pans. After the muggers fled, Kargl’s party was invited inside for tea.

The apartment was Nield’s, and a recent painting he’d done of a strange, desolate landscape rested on an easel. Kargl, at first, was unimpressed. “I didn’t realize that he did that on purpose, that the picture was ugly on purpose.”

Because of the friendship that begin with that encounter in the early 1970s, Nield’s first solo show is opening Sept. 10 in Roanoke College’s Olin Hall Galleries — 37 years after his death.

“The paintings are stunning,” said Olin Hall Galleries Director Talia Logan. “He should be celebrated. That’s why we’re really excited about this show.”

The exhibition, “Coming of the Great Fish,” will take up both the Olin and Smoyer galleries, and remain on display through Oct 10.

Nield’s imagination was expansive. In “Arctic Masque,” a pair of titanic peacock feathers grow from an icy wasteland, their false blue eyes doubling as the eyes of a mysterious face hanging in the sky. In “Red Assassin” a scene reimagining the fateful 1914 assassination of Archduke Franz Ferdinand manifests among the clouds.

In the piece that gives the exhibition its title, “Coming of the Great Fish,” a koi-like fish bigger than any whale flies above a village nestled in ice-capped mountains. In a humorous continuation of the theme, “Flight from the Fishes” shows a woman running through an archway as giant fish fill the sky behind her, recalling Tippi Hedren in Alfred Hitchcock’s “The Birds.”

Nield was born in Shanghai to a mother who was half-Chinese, half-Scotch. His father died when he was six, and his mother remarried, to an American businessman. He came of age in Michigan and moved to New York, at first with ambitions to become a writer, but he took up painting instead.

He took inspiration from the theories of Carl Jung, figures from history, people he knew and places he visited, and brought a photorealisitc approach to his surrealistic subjects that used techniques from the old masters. “He likes to portray people in these dreamlike states, sort of in a context of their environment, but also something else,” Kargl said.

While attending college and working at a bookstore, she became Nield’s part-time assistant, helping to stretch canvasses and carry art supplies. “On one painting I actually helped paint the background, because it had a lot of these ridiculous, repetitious little flowers. That was my job, to put in the little flowers in magic marker.”

Later, she photographed his paintings and wrote catalogs of his works, and ended up in possession of his art after his death in 1984.

“He was a very good friend. He was a mentor. He was empathetic with people,” she said. “I felt I owed him a debt of gratitude because I was struggling in school and he encouraged me: ‘Why don’t you take art history? You could write about my paintings.’ I never really took that very seriously, and I don’t consider myself a professional art historian or anything, but it changed the trajectory of my life.”

Kargl, 69, has lived in Roanoke since 1988. While working as a nurse in Salem, she enrolled in the design program at Virginia Western Community College, with an aim toward assembling a book about Nield’s life and art. A mutual friend put her in touch with Logan. At first Kargl simply had questions about how best to preserve an art collection. Plans for the show grew from there.

Though Nield had a small following during his lifetime, and gained occasional major commissions and media attention, he never broke into New York’s gallery system. Instead of pursuing a big break, he preferred to paint.

“He was never well known, and unfortunately died young,” Kargl said. “He deserved his 15 minutes, like everybody else,” Kargl said.

Nield’s 15 minutes of fame might at least extended into metaphorical 30 minutes, as after the Roanoke College show closes, his paintings will travel to Washington and Lee University’s Staniar Gallery, where “Donald Nield: American Surrealist” will stay up from Jan. 10-Feb. 9, 2022.

Another new Olin Hall Galleries exhibit won’t be found indoors, but you might spot it rolling down the street.

Los Angeles-based street artist Kenny Scharf has a celebrated series called “Karbombz!” in which he has painted lively cartoon faces, some accelerated by speed, on the bodies of more than 200 cars.

Norma the Art Car, a 1992 Cadillac painted by Scharf, is one of the “Karbombz!” Roanoke College alumna and trustee Joanne Cassullo, president and director of the Dorothea L. Leonhardt Foundation (who also sits on the boards of the Taubman Museum of Art and the Whitney Museum of American Art) brought Norma to Salem.

“The car is named Norma after its owner, Norma H. Demetrion, who passed away in the fall of 2020,” Cassullo said in a statement. The widow of Cassullo’s stepfather, Demetrion “was a spirited redhead which is why I suspect Kenny used lots of red when painting her car.”

Norma’s duties will include delivery of art kits and appearances at Roanoke College arts events.

Speaking of Hollywood connections to Roanoke College, a 2005 graduate is part of the screenwriting team that wrote “Hitman’s Wife’s Bodyguard,” a star-studded action sequel that topped the Father’s Day weekend box office in this troubled cinematic year 2021.

Phillip Murphy, who grew up in upstate New York, majored in history at Roanoke College, and tried his luck doing standup in New York City before joining his older brother Brandon in Los Angeles to write and pitch screenplays. Though the brothers have other projects in development, “Hitman’s Wife’s Bodyguard” is the first to make it to multiplexes.

The brothers also host a comedy podcast, “Camp Goodboy,” that can be found on Apple Podcasts.

“Coming of the Great Fish” by Donald Nield, a New York surrealist who is getting his first major solo exhibition at Roanoke College 37 years after his death.

ABOVE: “Red Assassin” by Donald Nield presents a dreamlike reimagining of the assassination of the Austrian Archduke Franz Ferdinand — the event that set World War I in motion. Artist Donald Nield’s first solo show is opening Sept. 10 in Roanoke College’s Olin Hall Galleries — 37 years after his death.

“Portrait Through the Balcony” by Donald Nield. The artist studied the techniques of the old masters at a time when the art world was focused on minimalism and abstraction. See Arts & Extras, Page B8