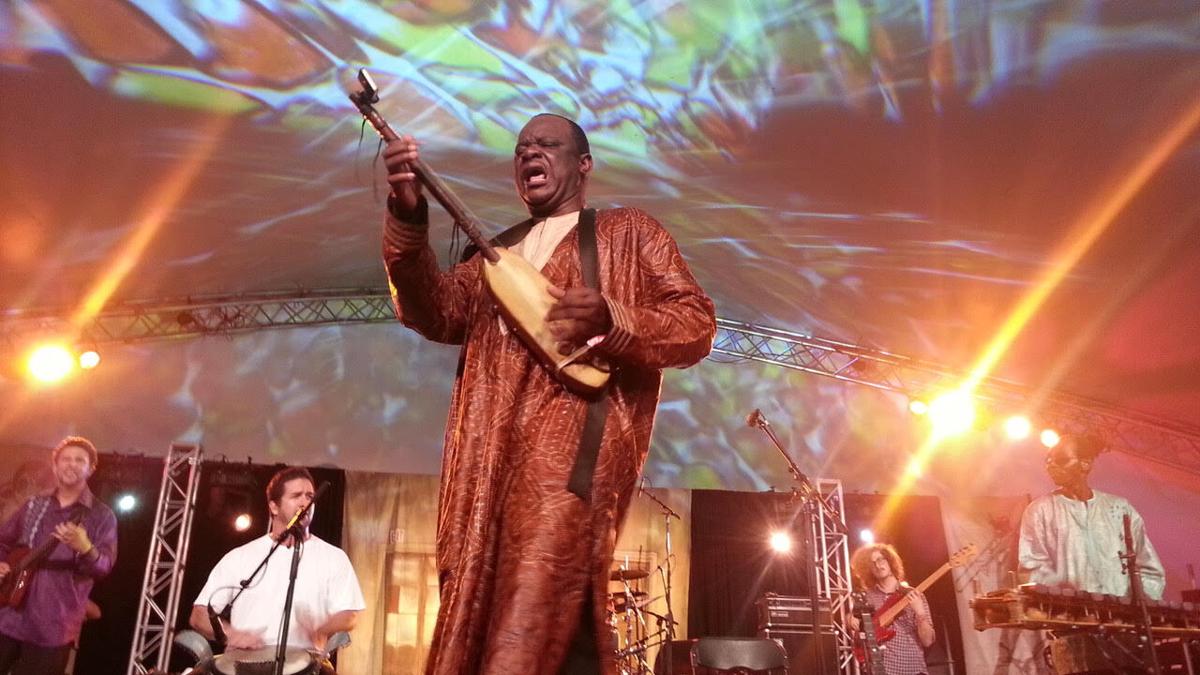 Cheick Hamala Diabate plays the ngoni, an African instrument that is ancestral to the banjo. 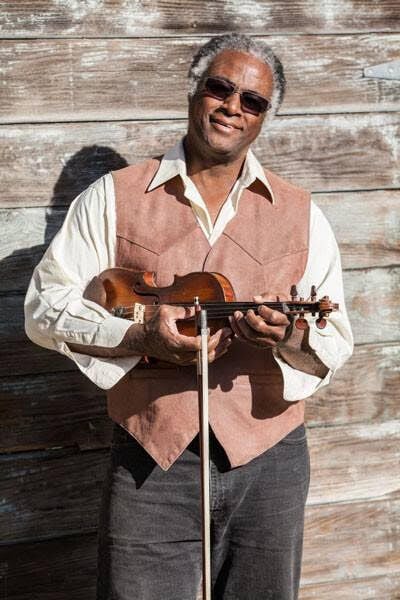 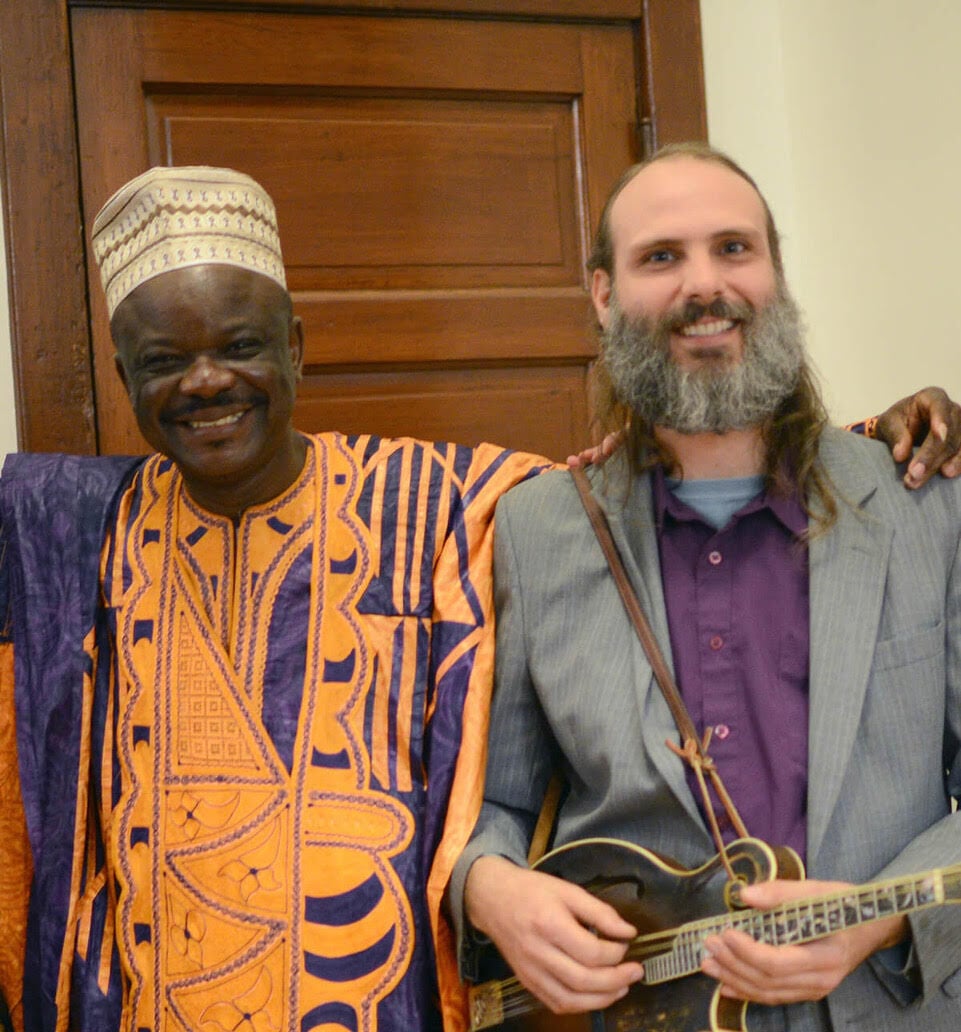 Cheick Hamala Diabate and Danny Knicely, shown in a recent photo, said they met at the Old Fiddlers' Convention in Galax.

Music fans know that American blues music is rooted in West African rhythms. Less well-known is that old-time music also owes a large debt to Africa. Performers on Saturday at The Floyd Country Store will celebrate and explore that deep musical connection, in a show entitled "From Mali To Appalachia."

Cheick (sounds like "shake") Hamala Diabate, a Grammy nominee for his 2007 album "From Mali to America," was born into a family of griots in Mali, West Africa. A griot ("gree-oh") is a musician, singer, poet, storyteller, and historian who carries on a tradition passed from "grandfather to father, father to son," Diabate says.

Among the instruments Diabate plays is the ngoni, an African stringed instrument with a skin head.

"Ngoni is the ancestor of the American banjo. Everything I play on the ngoni I can fit on the banjo," said Diabate, who lives in Washington, D.C. "I would like everyone to come see the connection."

White, who lives in Floyd County's Indian Valley section, is one of a handful of Black old-time fiddlers. He met Diabate when both were hired to play music for a documentary produced by WNET, the New York public television station. "They had him playing gourd banjo and I was basically playing the fiddle, and the scene was to depict what the slaves did after working out in the fields all day," White said.

White came to music by way of dancing. While attending East Carolina University, he co-founded the Green Grass Cloggers dancing group, then found himself drawn to playing the music he was dancing to. He is a teacher as well as a performer.

"Any slave that was a musician was a commodity to the owner," White said.

They were often hired out to play at neighboring plantations. Enslaved musicians who traveled from plantation to plantation had a greater opportunity to escape.

"Part of where they found refuge was in the Appalachian mountains," White said. "A lot of people of Scottish and Irish descent took them in, because the Irish were considered by many during those times to be as low as the lowest Black person was."

Although they had been taught to play European styles on the plantations, Black musicians brought African influences to their music. That set the stage for mixing African and Scots-Irish styles.

Danny Knicely grew up in a Rockingham County family steeped in mountain music traditions. He met Diabate at the Old Fiddlers' Convention, in Galax, soon after Diabate moved to the United States in 1995.

"The banjo has its roots in Africa, even though it is often considered a white 'hillbilly' instrument," Knicely said.

That perception is at least partly due to marketing decisions made a century ago at the dawn of the recording industry. Blues recordings, known as "race records," were marketed to Blacks, while early country or "hillbilly" records were marketed to whites.

"In the early 1900s when music became entertainment, the recording labels sort of chose the path for us," Locke said. "That's not necessarily the way it was prior to that moment in time."

Listeners on Saturday can expect to hear a celebration of the banjo, with "a lot of African music and a lot of old-time music and a lot of conversation about the influences and how music sort of evolved over time as the instrument landed in the Appalachian Mountains," Locke said. "There'll be a good bit of dialogue between Cheick Hamala and Danny Knicely and Earl White about this journey."

Locke sees the show as a contribution to the wider social dialogue happening now.

"What's important especially right now is we are really honoring the deep influences of African Americans on American music, not just blues and jazz, but old-time music and country music, generally speaking, that's been left out of the history books on some level," he said.

But, he added, the evening will not have the tone of a lecture.

"There's no agenda other than a real celebration of contributions to music," Locke said, "a real simple and beautiful representation of how great music is, and how it doesn't conform to lines that people draw in the sand."

'From Mali to Appalachia: A Musical Exploration'

Where: The Floyd Country Store, Floyd

A full-scale version of the Martinsville festival has not gone off since the COVID-19 pandemic.

Cheick Hamala Diabate plays the ngoni, an African instrument that is ancestral to the banjo.

Cheick Hamala Diabate and Danny Knicely, shown in a recent photo, said they met at the Old Fiddlers' Convention in Galax.