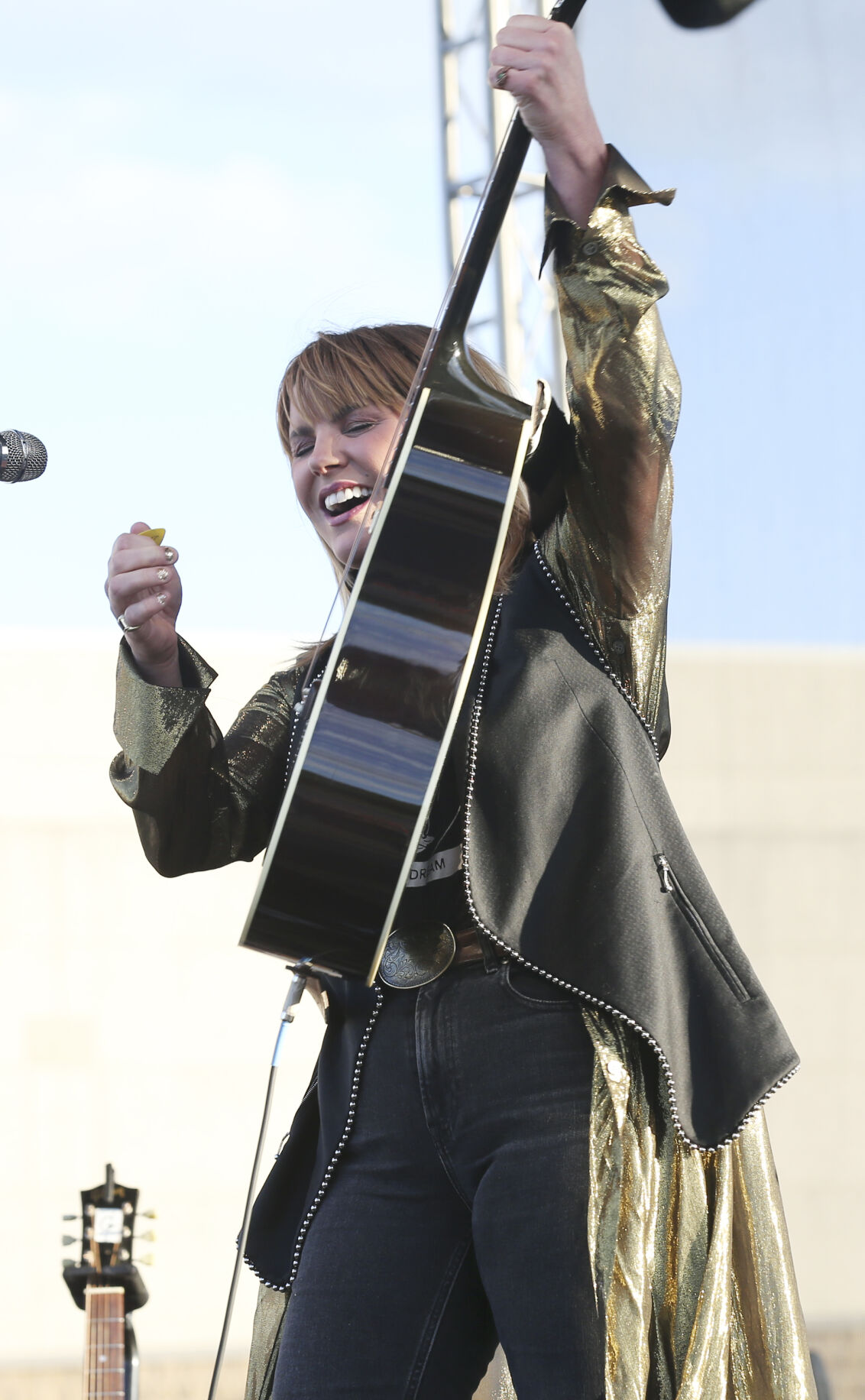 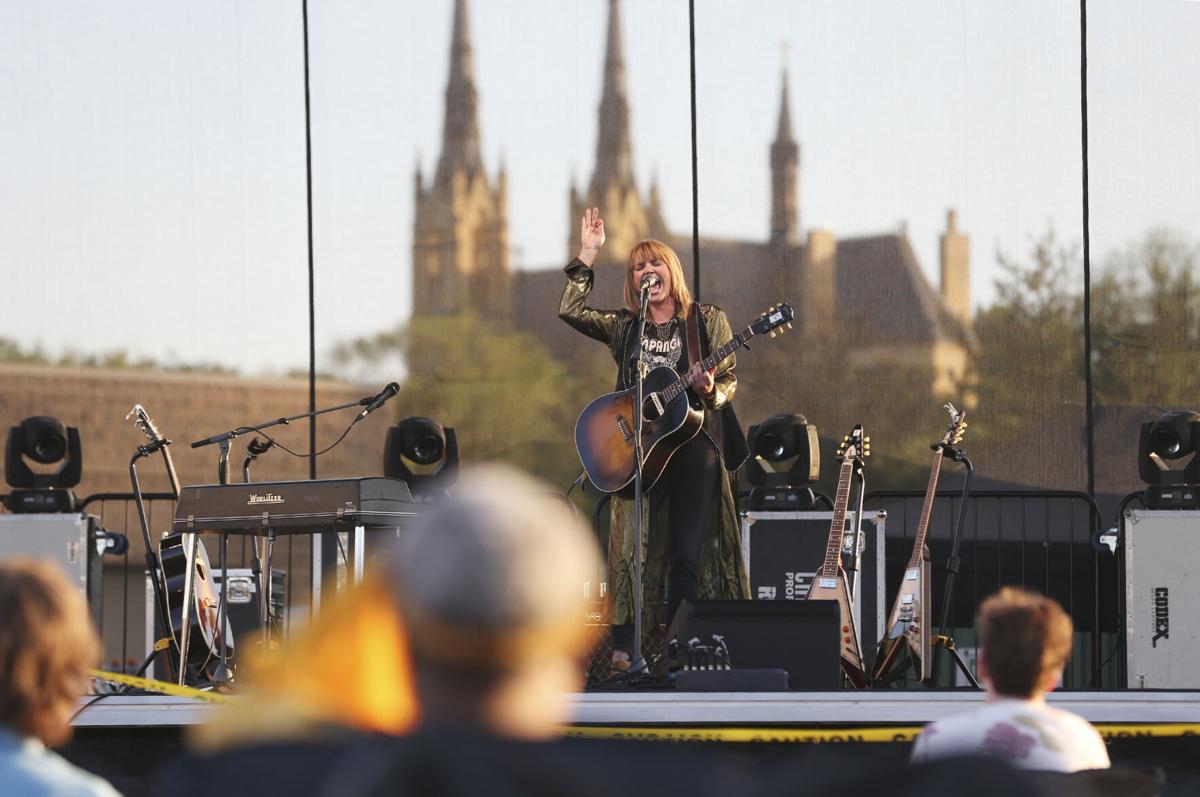 Grace Potter performs a pod-style outdoor concert at in the Berglund Center parking lot on Thursday evening in Roanoke. 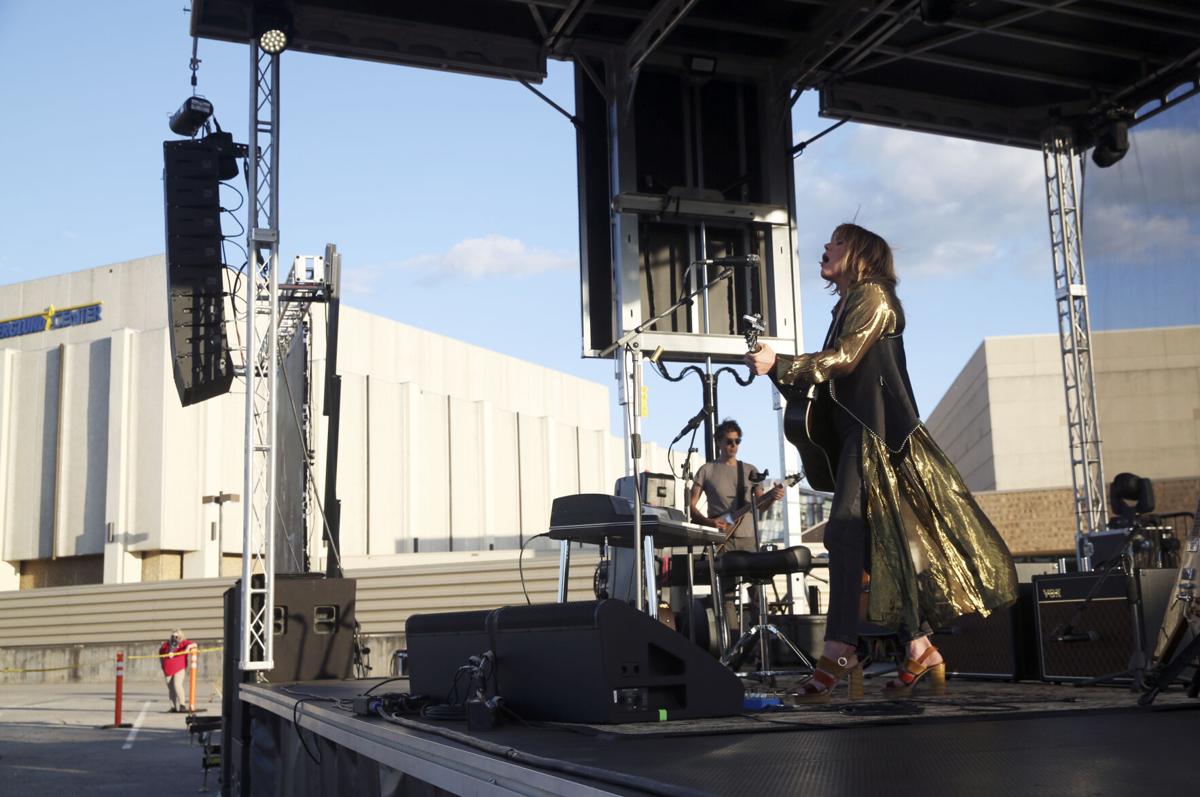 Early in what would turn out to be a two hour set, soul-rock singer Grace Potter played a quick snippet of Snoop Dogg’s “Gin And Juice,” then told her small audience at Berglund Center’s parking lot that it reminded her of a VIP stage crowd.

The solo performance was an intimate experience, but with social distancing rules in place, no one had to dance close to strangers and smell each other, she said. That line sent her off on a tangent about Axe Body Spray.

“I can always tell when I’m near a college” because of the scent, Potter said.

Those quick moments represented much of her Thursday night show, in which she mixed bits of songs — many requested from among the 286 people there, and some seemingly pulled from Potter’s inner playlist — with solid servings of goofy humor and stories about her music. Fan favorites including set-opening “Oh Mary” and “Medicine” shared space with covers of Prince’s “When Doves Cry” and The Rolling Stones’ “Dead Flowers.”

The free-flowing attitude and audience interaction were fun. Her voice, though, was the star. Potter accompanied herself with one of several guitars or an electric piano, allowing every nuance of her world class vocal instrument to break through.

Her range was, as usual, stratospheric. Every slide into falsetto, every controlled rasp was more apparent than in every other Southwest Virginia performance, which included her bands.

After darkness fell over the scene, and she had rumbled through pastiches from Ann Peebles, Al Green and Ace of Base, she got pseudo-serious.

“I love the wedding band vibe, but I’m gonna do some of mine,” she said. “I’m a Grammy nominated artist!”

Her most recent album, “Daylight,” had in fact received a Grammy nod for best rock album, and its title track another nomination, for best rock performance. She played that number for the first time, solo, she said after wailing through it.

“That was a daring experiment, Roanoke,” Potter said.

Other “Daylight” cuts included “Every Heartbeat,” “Shout It Out” and set closing “Release.” Potter went back in her career for “You and Tequila,” on which she had guested with country star Kenny Chesney and received her first Grammy Award nomination, in 2012.

Later, someone in the crowd requested it again.

“I’m not going to play it twice just because you were peeing” the first time, Potter said.

After playing “Apologies,” a song from her Grace Potter and the Nocturnals era, she told the crowd that she was 18 when she wrote it, but didn’t want to perform it for anyone, because she didn’t want her parents to know that she had had sex. Turned out, that was the song that introduced Chesney to her voice and led him to bring her in for the “You and Tequila” session that would broaden her audience.

Potter is also beloved in the jamband world for her collaborations with Warren Haynes. She nodded to that with Fleetwood Mac’s “Gold Dust Woman,” her Wurlitzer electric piano setting the vibe nicely.

Potter was well known in these parts, with shows at Jefferson Center, FloydFest and Berglund Performing Arts Theatre, before Chesney and Haynes were part of her story. She told the crowd that in all of her visits to perform here, she had never gone up Mill Mountain before, so she decided to improvise a new song about Roanoke, in which she sang of that municipal peak a la Led Zeppelin, grinding out some blues-rock riffage on her Gibson Flying V guitar.

She promised the crowd that she would have it finished, to play next time she comes to town.

See video and more photos of the concert online at roanoke.com

James Wan has revealed the full title for ‘Aquaman 2’

James Wan has revealed the full title for ‘Aquaman 2’

Ariana Grande has filed a trademark for a beauty line

Ariana Grande has filed a trademark for a beauty line

cutNscratch: Production teams get back to work

The live music scene has burst back to life in recent weeks. That means more than just bands jamming and fans dancing.

Thile returns to a venue he played with Bela Fleck in 2017.

CDC guidance saying fully vaccinated people can go maskless has spurred a desire to return to normal, and to concerts. So how risky are indoor concerts?

CMT Music Awards 2021: How to watch and who's performing

The CMT Music Awards are Wednesday night. The show, which will air live from Nashville, is hosted by Kane Brown and Kelsea Ballerini and some of country's biggest names are set to take the stage.

It’s actually happening. It actually feels OK to be out amongst people and listen to live music again.

Grace Potter performs a pod-style outdoor concert at in the Berglund Center parking lot on Thursday evening in Roanoke.