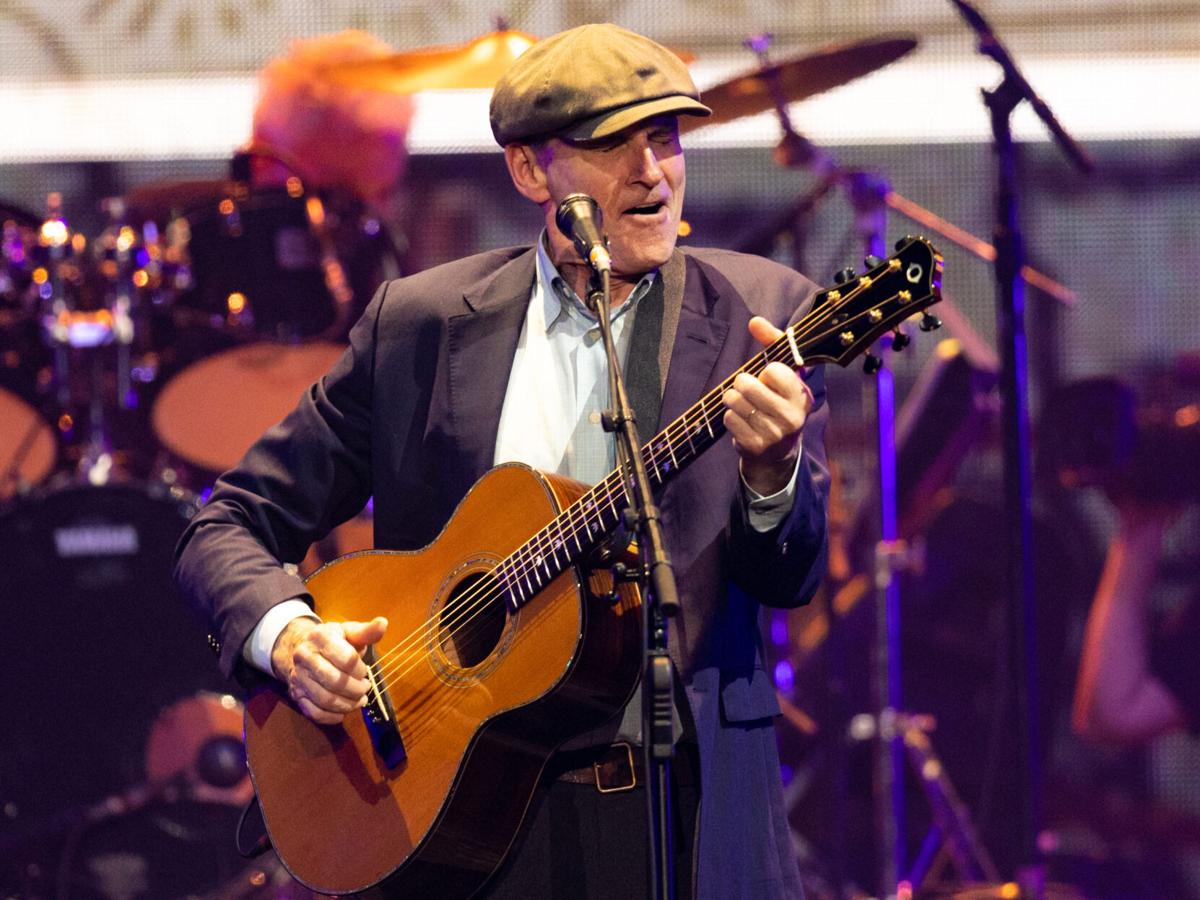 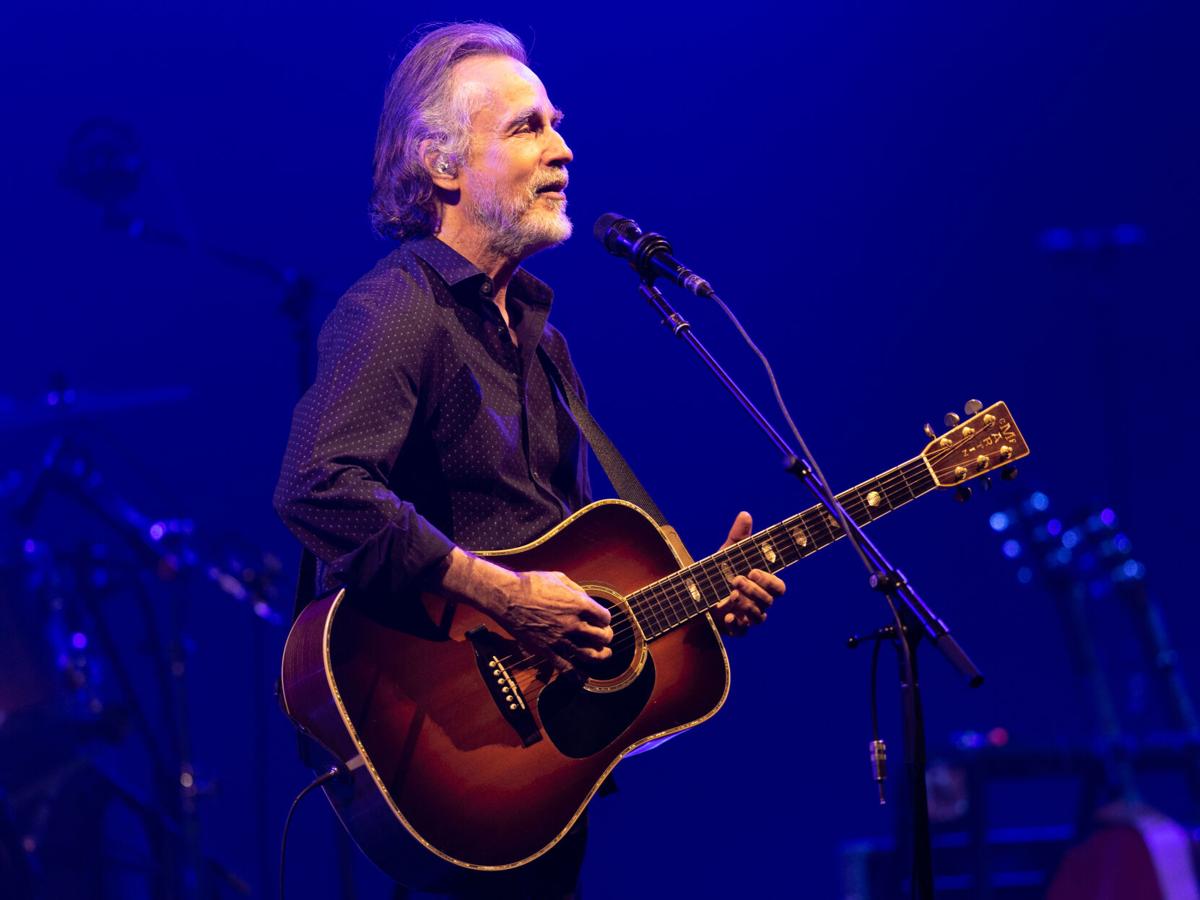 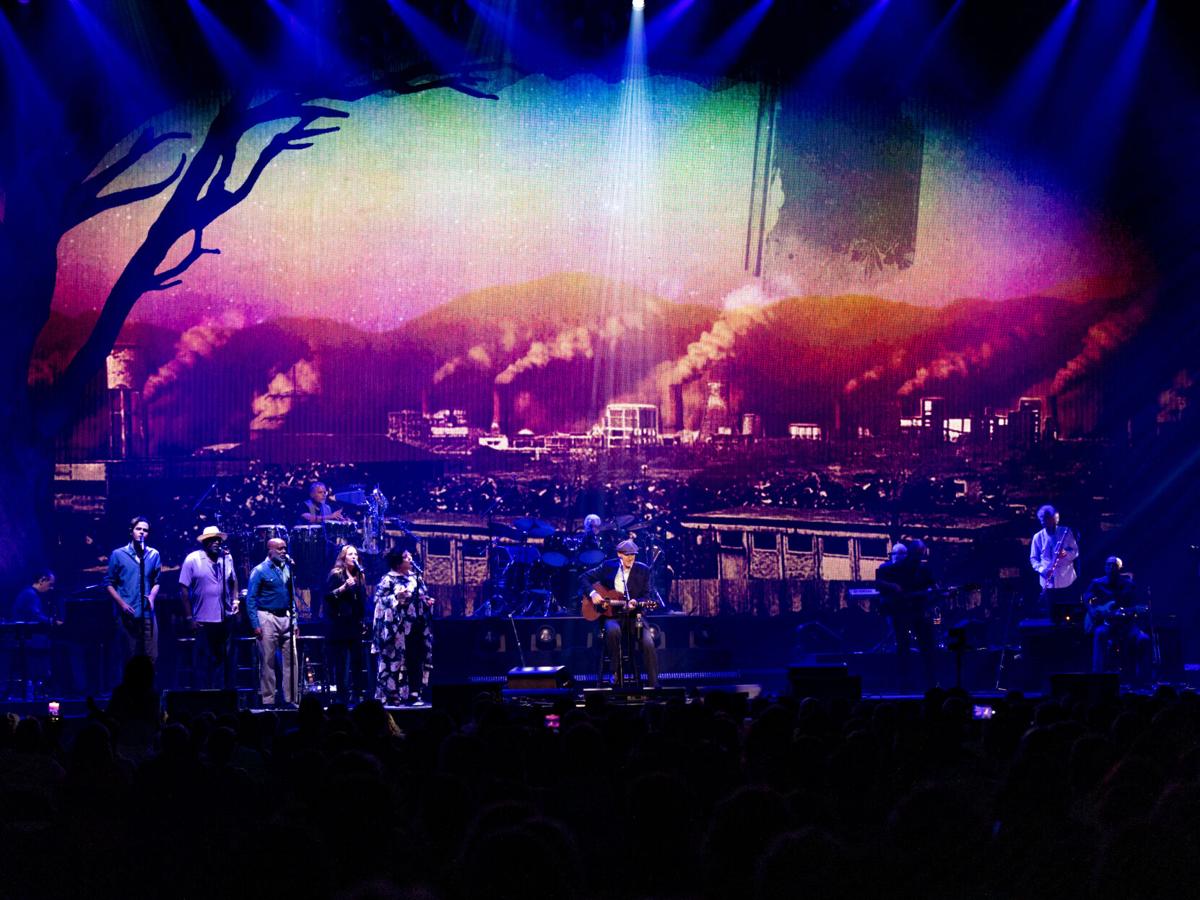 Taylor, a folk rock hero who has for nearly 40 years outlasted “Saturday Night Live” and “Animal House” star Belushi, told a sold-out audience of 7,366 at Berglund Center Coliseum on Wednesday that the comedian’s drug overdose death was a “wake-up call” for him. He used that important life info to introduce one of his songs, “That’s Why I’m Here.”

The Belushi-centric second verse, which he told the audience was the first he wrote for the tune, was part of a song about fate and friendship and his relationship to “perfect strangers” who call him “by name” and “pay good money to hear ‘Fire and Rain’ again and again and again.”

In a way, it explained why the 73-year-old singer and songwriter stood on stage, long after he could have hung it up and relaxed in the country somewhere. The best part: He seemed to still be loving it. With his All Star Band, including backup-singer-slash-son-slash-”the-apple”-of-father’s-eye, Henry Taylor, JT brought about 105 minutes of hits and a couple of energetic deep cuts, and shared stage time with his opening act, Jackson Browne.

Who else is Jackson Browne, a certified mellow gold headliner, going to open shows for? We’ll get to him in a few.

But first, that all-star band. Not many performers introduce their sideman drummer after the first song, but not many performers can afford to have Steve Gadd on the throne. Gadd, who played the drum beat on Paul Simon’s “Fifty Ways To Leave Your Lover” and tracked the groove and timeless drum break on Steely Dan’s “Aja,” was in full effect from his boss’s opening song, “Country Road,” bringing tom-tom thunder, dynamic variety and perfect groovemanship to the proceedings.

“He’s a bit of a legend,” Taylor told the crowd of Gadd.

Taylor also called longtime violinist and harmony singer Andrea Zonn after that number, though her fiddle cut out a couple of times in the intro. Another stage glitch occurred later on, when the house lights came on unexpectedly as Taylor addressed the crowd. “Has anyone considered that this place might be haunted?” he asked, to laughter.

Most of the set, though, went off as expected, with Taylor and band rolling through such cuts as “Copperline” — he teased that it was about the state just south of Virginia, but was not “Carolina In My Mind.” That old smash would come later.

Other lesser-known but well-received numbers included “Line ‘Em Up,” with its sympathetic opening verse about President Richard Nixon’s resignation, and “As Easy As Rolling Off A Log,” which he said was inspired by the old Merrie Melodies cartoons, then proved with the animation on large screens.

Clarinet on that one came courtesy of “Blue” Lou Marina, the reed man extraordinaire who was part of Belushi’s and Dan Aykroyd’s “The Blues Brothers” projects, and has been with Taylor since at least his most recent Roanoke appearance, in 2011 at neighboring Berglund Performing Arts Theatre.

The highlight for this old blues and jazz freak came with “Chili Dog,” an obscure number that featured organist Larry Goldings and guitarist Michael Landau in a song about addiction to the specialty at Los Angeles landmark Pink’s Hot Dogs, near where Taylor has recorded. Gadd and rhythm section mate Jimmy Johnson burned on that one, too. Seriously, a writer could focus reviews on each of those two musicians, and run out of print space.

The hits included the aforementioned “Fire and Rain,” which received one of three standing ovations the audience gave Taylor and crew. “Sweet Baby James” — with a pop-up cowboy book set-piece video on the big screen — “Fire and Rain,” the actual “Carolina in My Mind,” “Shower the People” and the classic cover of “How Sweet it Is (To Be Loved By You)” rounded out the set.

Encore number “Shed A Little Light,” with Taylor and five harmony singers delivering vocals, was an emotional highlight. The Rev. Martin Luther King Jr. inspired the song, and Taylor’s lyrics were a reminder that in such strange times, it’s probably wise to actually study what MLK was about, instead of just regurgitating out-of-context and oversimplified talking points.

Browne joined his old friend Taylor for “Take It Easy,” the Eagles hit that Browne wrote with the late Glenn Frey. The headliner closed with one of his classics, a cover of Carol King’s “You’ve Got A Friend.” And, you know, that’s what he’s here for: to make folks feel warm through music.

Browne was returning the favor that Taylor paid during the nearly hour-long opening set. JT, with his ever-present acoustic guitar, took plenty of lines on “The Pretender.” Fortunately, he warmed up his voice later, for his own set. It’s certain that most of the crowd didn’t notice.

JB never had to be a “happy idiot,” as he was writing important songs about the same time he was eligible for a drivers license. And he’s still doing it, with several songs from his new album, “Downhill From Everywhere,” in his show. It’s fair to say the most rocking among them were the title cut and “My Cleveland Heart,” which he told the crowd was about receiving an artificial heart.

Browne didn’t really get one of those, but he did get COVID-19. His Roanoke show with Taylor was postponed twice during the pandemic, but the two were grateful to be here, they told the crowd.

“Thanks for hanging onto your tickets,” Browne said.

With the new songs and such classic rock staples as “Doctor My Eyes,” “Late for the Sky” and “Running On Empty,” Browne was so much more than your typical opener. His vocals are still strong, his harmonizers still more than able, his band spot-on for the occasion.

In fact, this show could have used another act. It started on time at 7:30 midweek, as many were still rolling in on shuttles and/or being turned away for having bags larger than allowed under new rules at the venue. It’s a shame to think that folks missed a second of either performance.

Photos: From the James Taylor, Jackson Browne concert in Roanoke

Sometimes you don’t know how widely beloved someone was until they die. That was the case last week with comic Norm Macdonald’s death.