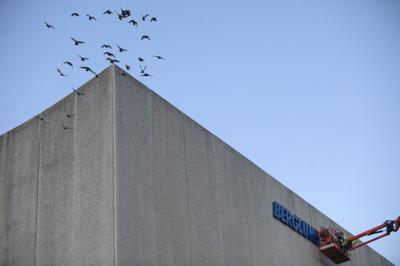 The James Taylor and Jackson Browne show at Berglund Center was rescheduled for Aug. 11. The date was incorrect in a Wednesday Extra story, in print, and an earlier online version.

What were once drive-ins are now walk-ons.

Berglund Center combined with Charlotte, North Carolina-based concert promoter MaxxMusic this spring to put on a series of drive-in shows on the venue’s parking lot.

When soul-rocker Grace Potter hits the stage on Thursday for the third in the series, she will mark a change in the way they’re done. No more drive-in shows from here on. The remaining events will be pod-style, socially distanced ones.

The change came in part because of evolving COVID-19 regulations about gatherings, MaxxMusic president Gregg McCraw said. But audience — and potential audience — feedback about accessibility and ticket prices further drove home the need, McCraw said in a Tuesday phone call from Charlotte.

The promoter and his team took note of social media responses to each concert announcement.

“The message that we heard very clearly was there were a lot of people who wanted to go only with one other person who they had been socially distancing with anyway, and it become cost-prohibitive for a lot of people to go out and basically pay for four people [per car] but only take 2 people.”

“It’s just much easier, much less expensive for those who only want to come in pairs, come as couples, to experience the event and not feel like they paid for something that they didn’t get. So we listened to all those comments that were posted online, with the exception of the one guy who kept beating up the Berglund Center because he couldn’t bring his gun.”

A recently passed Virginia law allows localities to ban firearms on their property. The Roanoke City Council this year enacted such a ban.

“There’s not much I can do for that guy,” McCraw said. “I’m pretty happy that he, especially, cannot bring his gun to the concert. Short of that, we really did try to listen.”

Each of about 600, 10 x 10 pods that organizers will line out on Wednesday, with 6 feet of aisle space at each side, will comfortably fit six people. Ticket prices start at $115 for two people, with the option for four more per pod (see Grace Potter story for more information). That opens up the potential for a crowd of about 3,600.

Capacity for the drive-in shows was about 600 people.

“When we started doing this in North Carolina, we couldn’t even guarantee people that they could get out of their cars,” McCraw said. “We thought we might have to broadcast to FM radio, due to outdoor public assembly guidelines.

“We planned for people to have a space beside their vehicle … but as [capacity limits] eased even further, we can remove cars from the equation, allow for higher capacity and make the experience better for everyone. It’s not different from going outdoors for a festival-like concert, except you have an assigned space to be in.”

Another major difference, at least for those who enjoy adult beverages at a concert, is that patrons may bring their beer, wine and other concessions to their pods. Due to ABC law, Berglund Center kept alcohol consumption relegated to a makeshift beer garden for the first two shows in the series — Tab Benoit with Samantha Fish, and Robert Earl Keen.

“It should be easier in this setup than with cars,” McCraw said. “As much as we tried to stagger the spots … There was always somebody with a larger car, and somebody who felt like they couldn’t quite see. With this, we’re removing those obstacles. I think this gives better sight lines and will encourage people to stay within their assigned spaces.

“We will still encourage people to wear their masks when they have to leave … for the restroom or concession.”

Patrons will park as they typically have when going to a Berglund Center show, then queue up in socially distanced lines for ticket scanning before staff directs them to their pods, Berglund Center spokesman Robert Knight said.

Security staff will be in place to mind the commingling once the audience is on the concert lot.

Two more shows are scheduled on the lot. St. Paul & The Broken Bones play on May 26, and The Nielsen Trust (featuring Cheap Trick guitarist Rick Nielsen) with Nick Perri & The Underground Thieves are set for June 5. Both of them were originally announced as drive-in concerts.

“We’re getting everyone much closer to the stage in this setting, and we’re doing everything we can to reward people who bought their tickets already, get them better seats, but they will be pod shows going forward,” McCraw said.

He added: “We’re trying to do everything we can to make this accessible to more people, so they can get out and enjoy music till we can all get back inside and do things like we’ve always done them.”

“We’re happy to provide options for live entertainment for everybody,” Knight said. “It’s what Berglund Center does, and we’ve been missing doing it for over a year. We’re live event junkies … so we’re happy that things are going in the direction to where we’re open at full capacity in the next six months or so. Who really knows what that time frame looks like?

“But we’re happy that it’s going toward it, and if anything, pods speak toward regulations being loosened, from when we even started this. We did the cars because of social distancing.”