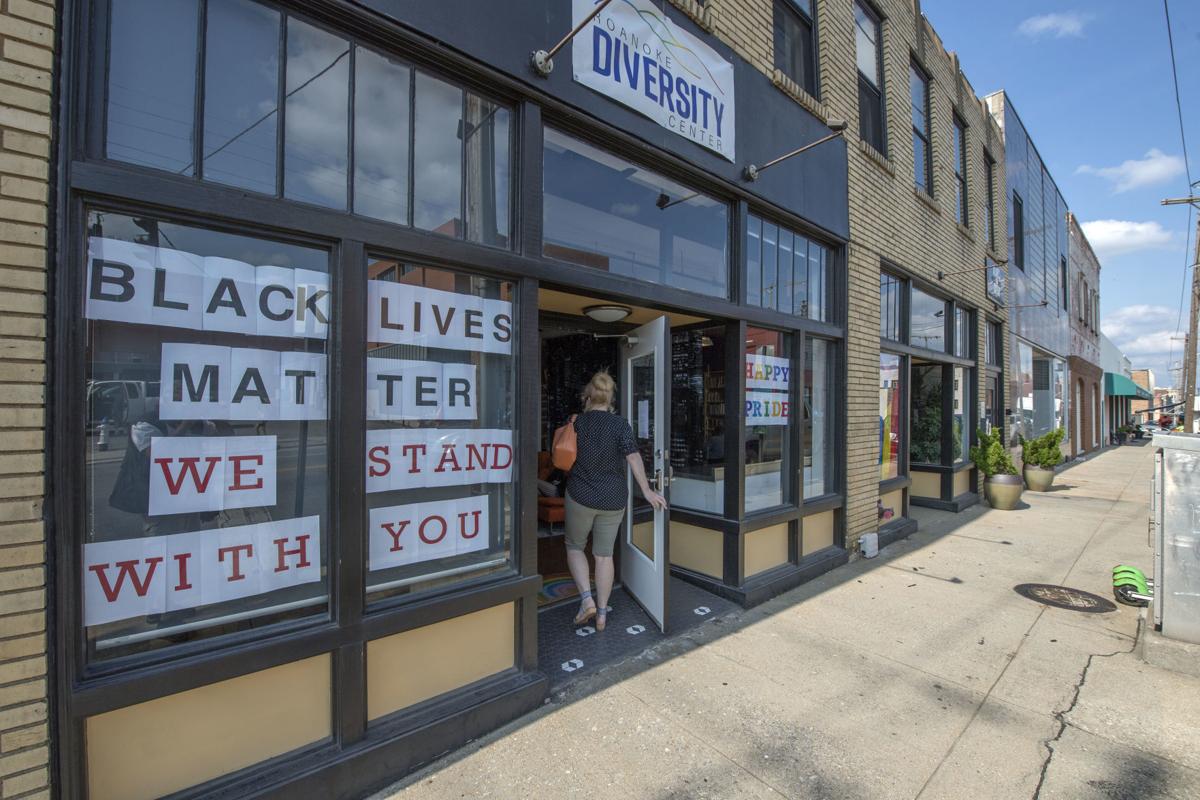 The center’s new location is at the corner of Campbell Avenue and Fifth Street. 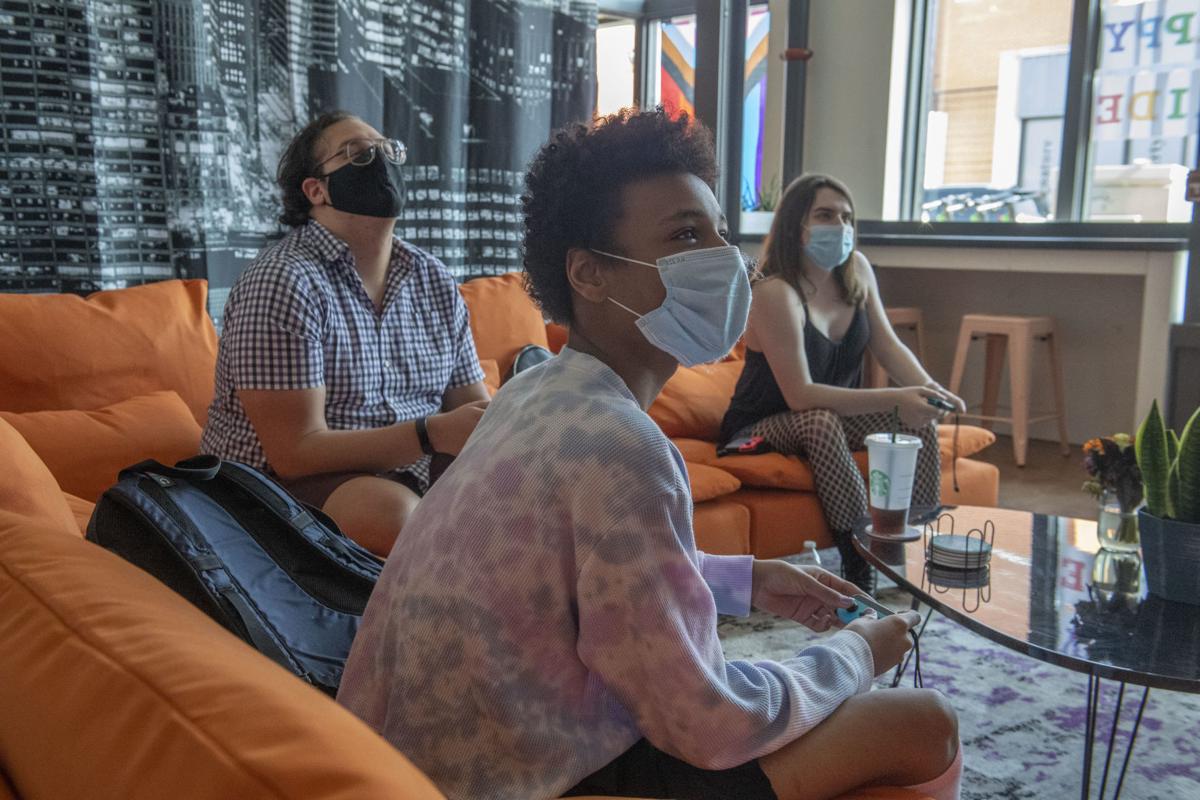 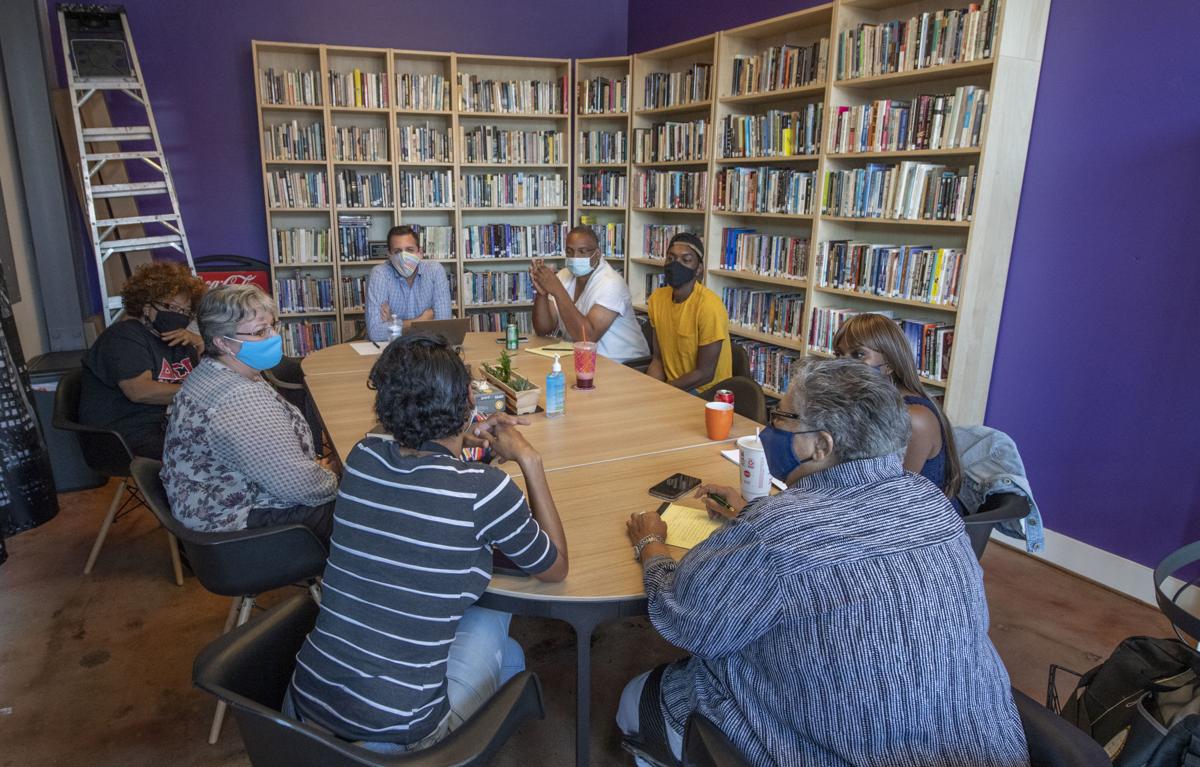 Volunteers meet in the library at the new Roanoke Diversity Center. 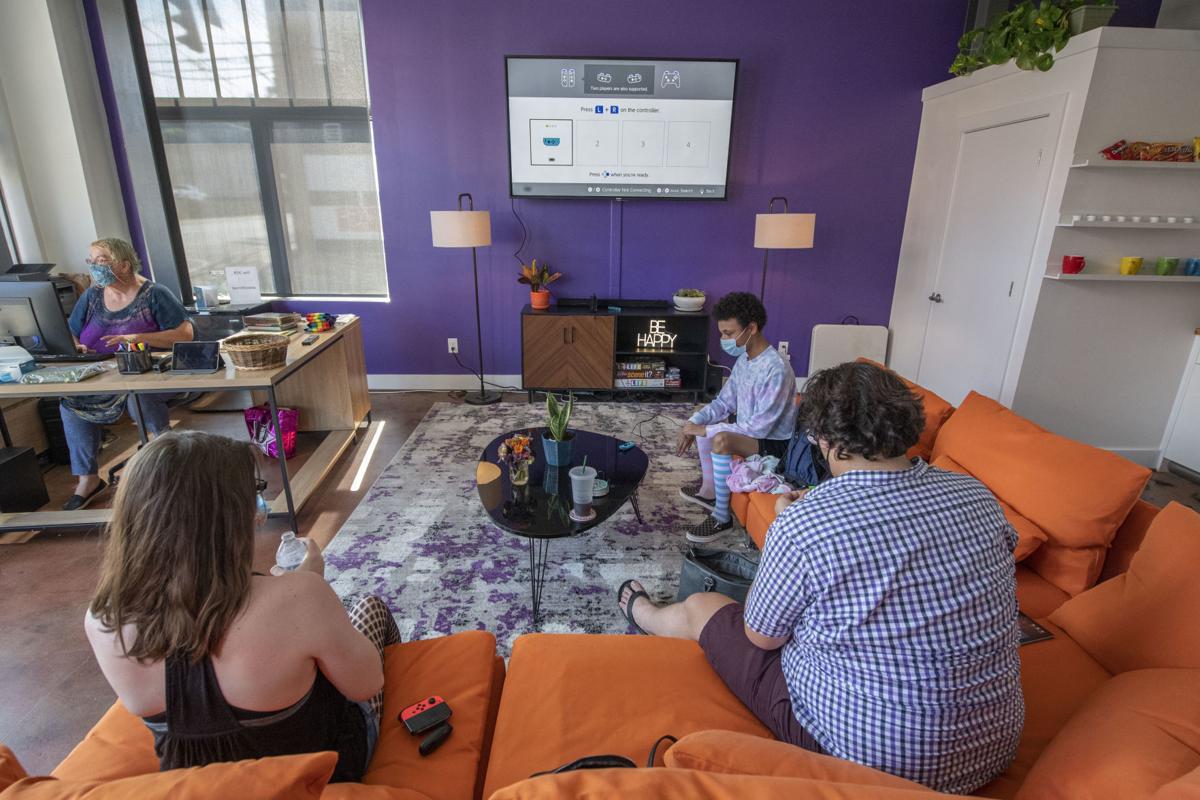 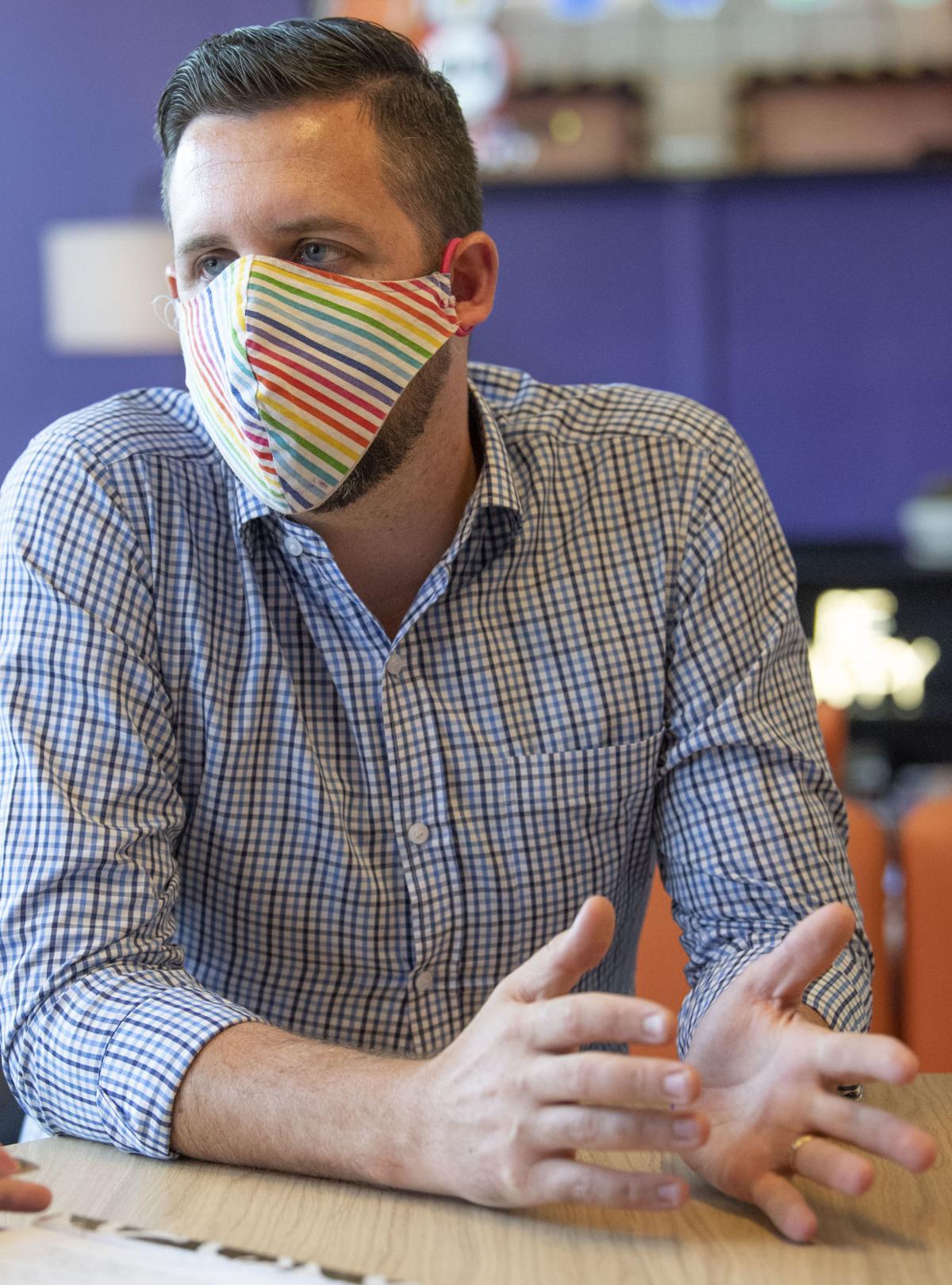 Peter Volosin at the new Diversity Center in Downtown Roanoke 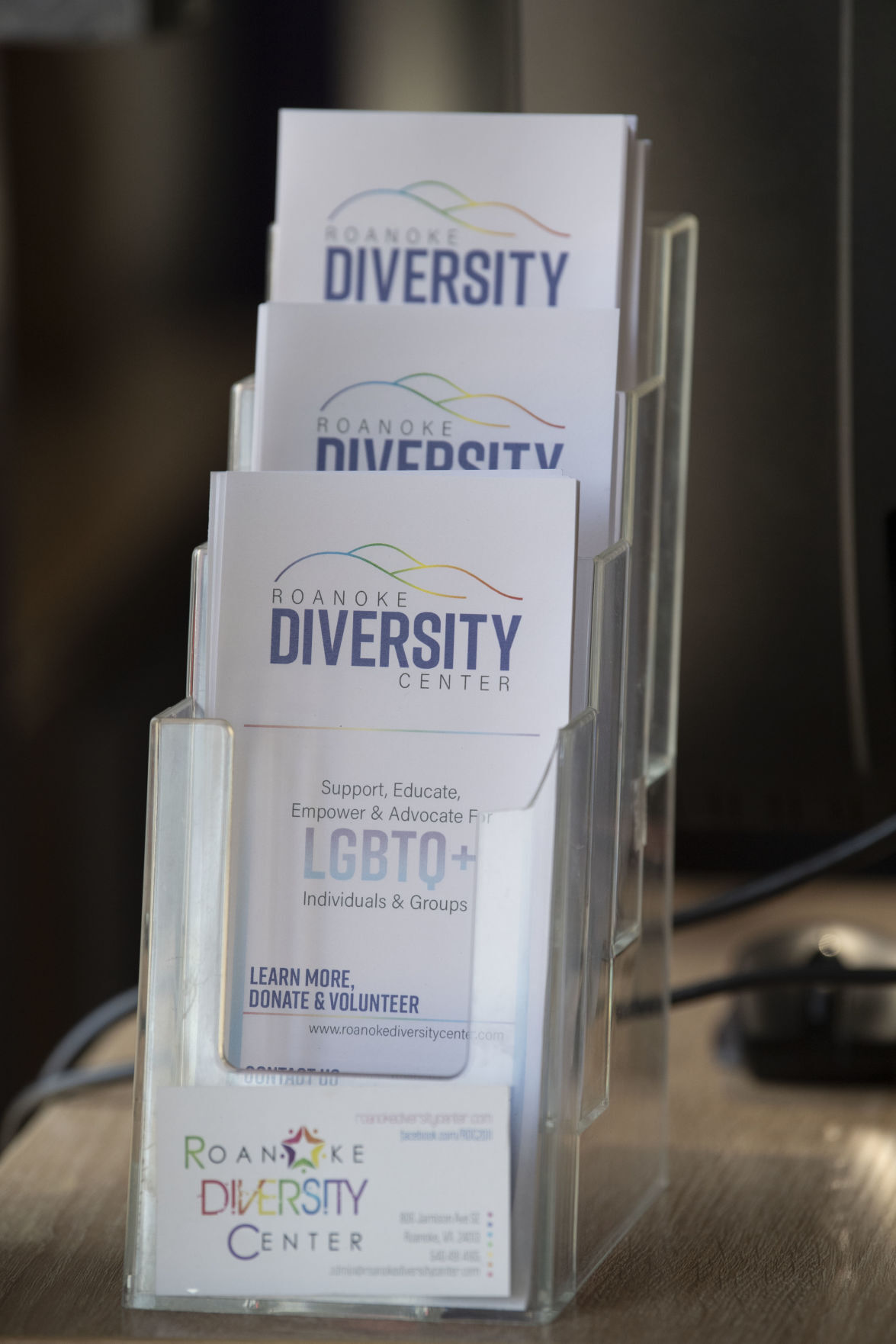 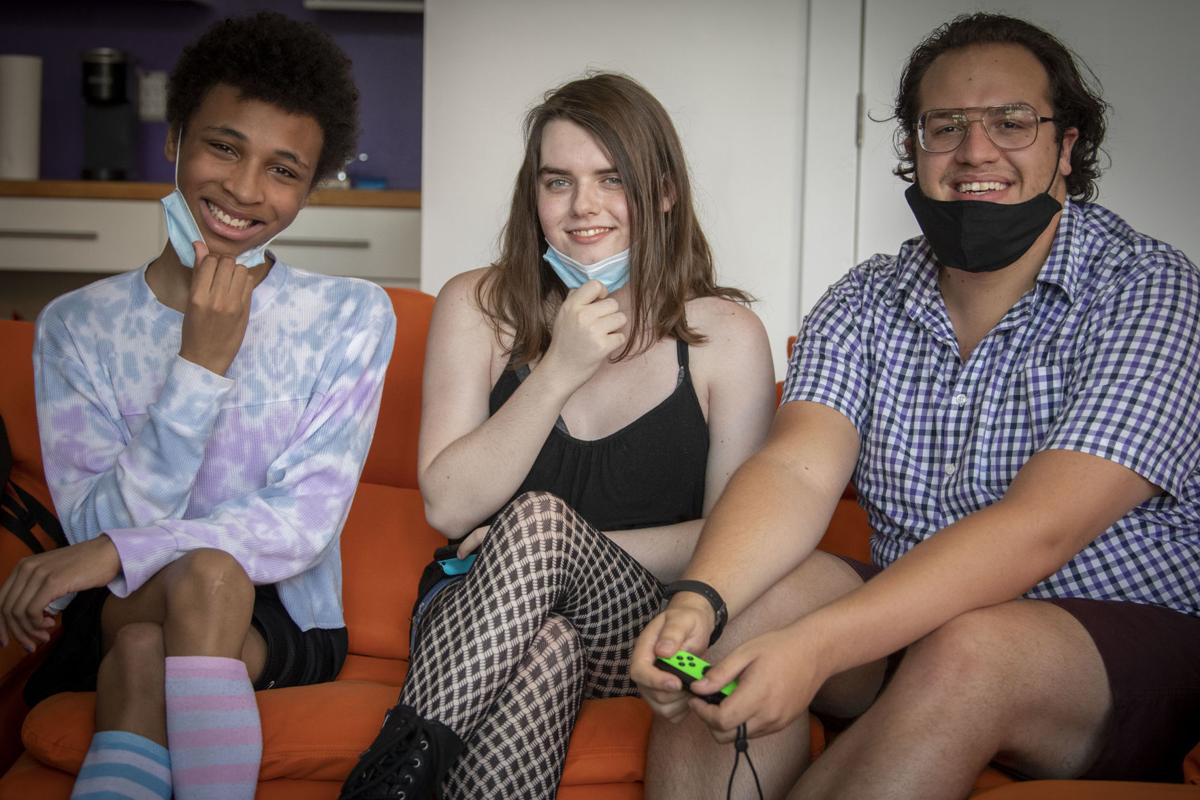 Lee-Sporell (from left), Shomaker and Harlow make new friends at the center.

Updated 7/26/20 10:24 a.m.: Roanoke Diversity Center board member Alex Dykes worked with Aaron Garland of Garland Properties on the rental agreement for the center's new building in downtown Roanoke. Garland's affiliation with the center was incorrect in a previous version of this post.

By Rory Rhodes Special to The Roanoke Times

It’s 5 o’clock on a Thursday at the Roanoke Diversity Center. Just past a welcome desk offering face masks, hand sanitizer and giveaways like rainbow-colored koozies, several chatty teens relax on a bright orange sectional. They’re playing Nintendo Switch on the flatscreen TV, part of a weekly Gaymer Thursday event. Across the room, divided by a floor-to-ceiling curtain, a group of community members sits at a long table, brainstorming how to reach out to more Black LGBTQ+ youths.

The center’s new downtown location, at the corner of Campbell Avenue and Fifth Street, has only been open since June 28 — coinciding with the anniversary of the 1969 uprising at Manhattan’s Stonewall Inn, which began the modern gay rights movement — and yet it’s already a hive of activity. That’s exactly what president Peter Volosin and the team of board members and volunteers hoped for when they moved from their previous location in southeast Roanoke, the center’s home since 2012.

“Some people had no idea we were there,” said Volosin, a Roanoke native. “This has been the goal since our founding: to increase visibility.”

Originally launched by RDC board member Frank House and current Roanoke Vice Mayor Joe Cobb, former pastor of Metropolitan Community Church of the Blue Ridge, the nonprofit Roanoke Diversity Center was initially housed in the church’s basement. Although the church’s fellowship emphasizes LGBTQ+ outreach and support, Volosin said, not everyone was comfortable coming to the location, and it felt “tucked away.” So when RDC board member Alex Dykes and real estate agent Aaron Garland of Garland Properties worked out a discounted rate for the center to rent the new building, previously the home of Treehouse Collective, Volosin said they knew it was a terrific opportunity. Not only that, it’s a great fit for the neighborhood.

“We jokingly call this area ‘Non-Profit Row,’ ” he said.

Angels of Assisi, the Council of Community Services’ Drop-In Center, Appalachian Trail Conservancy, United Way, Total Action for Progress and Family Service of Roanoke Valley are all nearby. The neighborhood is home to new apartment lofts and restaurants, and the center is an easy walk to the YMCA and Jefferson Center, as well as Old Southwest, where Volosin lives.

As soon as Garland was able to secure the new location with a five-year lease, the move began. Volosin and volunteers painted the new purple walls and created a vibrant, welcoming space featuring the social area, a kitchenette offering snacks and drinks, counter seating facing the avenue, a collection of games and DVDs, and multiple shelves housing the Ricketson Memorial Lending Library, which holds 3,000 LGBTQ-oriented books from Jim Ricketson’s private collection.

Near the library hangs the flag from Backstreet Cafe. In 2000, Backstreet was the site of a hate crime when a gunman targeting the LGBTQ+ community killed one person and wounded six others. Along with inviting local artists to contribute to the space, Volosin hopes to raise funds for a placard commemorating the event.

More library shelves, permanent outdoor signage and art are still to come, but Volosin said it was important to get the center up and running as soon as possible in order to begin welcoming established and new members. He’s especially concerned about LGBTQ+ youths who are struggling with their identity.

“Going into a space like this can be a hard first step,” he said. “We want to make it easier, be welcoming, and take that burden off their shoulders.”

It can be even tougher for young LGBTQ+ Black, Indigenous and other people of color, who may face additional biases. To that end, the Thursday meeting that just finished included notable Black community leaders such as local NAACP President Brenda Hale, William Fleming High School student support specialist Sheila Herron and Garland Gravely, who remains at the table after the meeting ends. Gravely is a former RDC founding board member who co-founded Fashionista Roanoke and is house father of House of Expression, which offers LGBTQ+ people of color a supportive family environment.

Gravely is involved with the center’s Generations program, one of many efforts seeking to connect members. The center also supports Youth SAGA (Sexuality and Gender Alliance), a group for teens. RDC has four standing committees: Governance, Fundraising, Budget & Finance and Programs, which Volosin said is “the most fun.”

Because of the center’s move and the current coronavirus pandemic, many programs are temporarily on hold. In addition to Gaymer Thursdays, the center hosted events such as trivia and open mic nights, Dinner and a Movie, Drag Bingo and various presentations and workshops as part of Out. Proud. Aware., a collaborative program with the Drop-In Center. They’ve also hosted a Diversity Summer Camp for several years.

The center is currently open Wednesday through Friday from 4 to 7 p.m., and Saturday from noon to 5 p.m. While the center employs a couple of facility managers to help keep the doors open, Volosin said, they are in need of more volunteers so that they can expand their hours and offerings.

“We’re here. Come visit, come volunteer — tell us your superpower and we’ll find you a program or help you create one,” he said.

Volosin noted that allies are welcome, and that the center’s space can be made available for community use, particularly for LGBTQ+ events. The Roanoke Diversity Center’s website features a calendar of events and a donation button to help fund its nonprofit mission to educate, empower and advocate for the Roanoke region’s LGBTQ+ community.

Already, Volosin is pleased with the visibility at the new location. Watching people walk by the windows, he said he is seeing results.

“I’ll see people go by a few times, scoping it out, looking in the windows,” he said. “Then one day, they come in.”

Roanoke-based bestselling writer is an executive producer and co-writer — and even gets a cameo — on a limited-run series based on her most recent book.

Maybe it’s the catchy theme song, but whatever the reason, “The Addams Family” has had remarkable staying power over the years since the serie…

'It's not helpful': Jonah Hill asks fans not to comment on his body

"I know you mean well but I kindly ask that you not comment on my body," he wrote to his 3.1 million followers.

The Halloween attraction created by Center in the Square haunts the site of the old American Viscose plant in Southeast Roanoke.

The black dress, the pigtails, the unblinking stare, the frighteningly flat affect and morbid obsession with torture, especially when inflicte…

Katey Sagal, known for playing Peggy Bundy on “Married... with Children,” was hospitalized after a car hit her while she was crossing an L.A. street.

The center’s new location is at the corner of Campbell Avenue and Fifth Street.

Volunteers meet in the library at the new Roanoke Diversity Center.

Peter Volosin at the new Diversity Center in Downtown Roanoke

Lee-Sporell (from left), Shomaker and Harlow make new friends at the center.