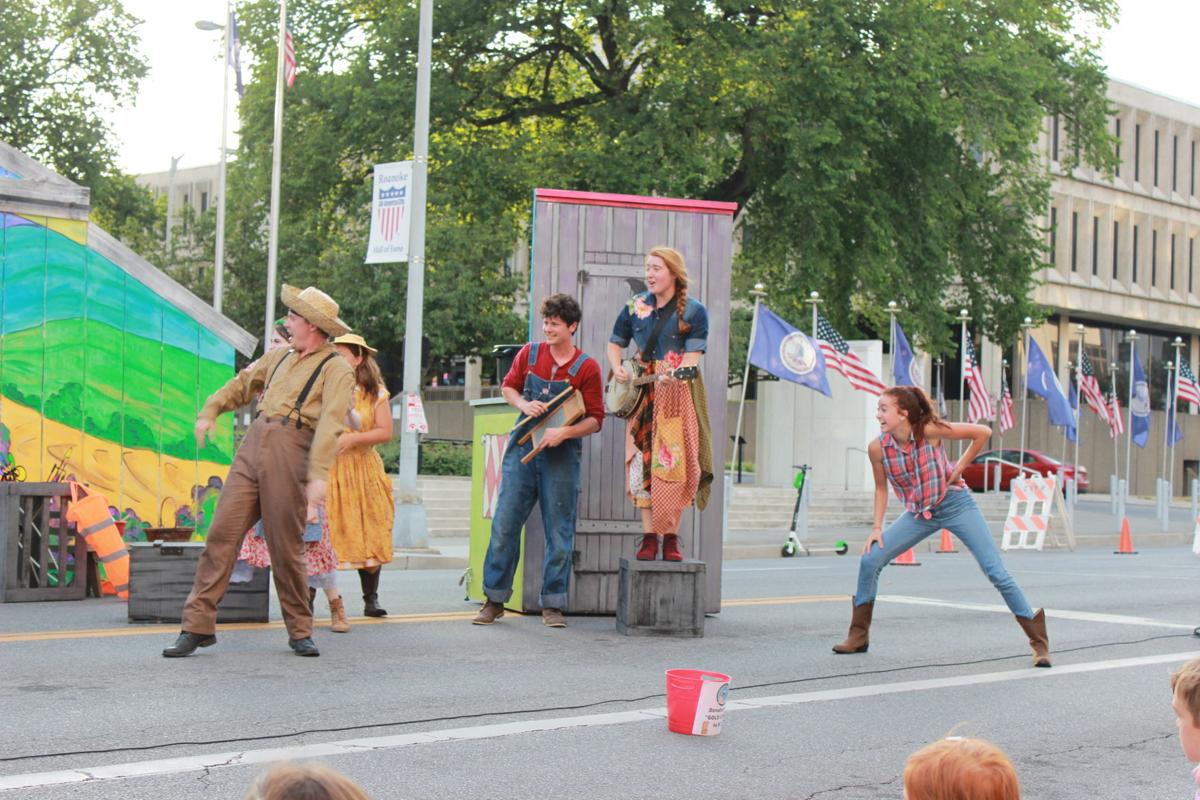 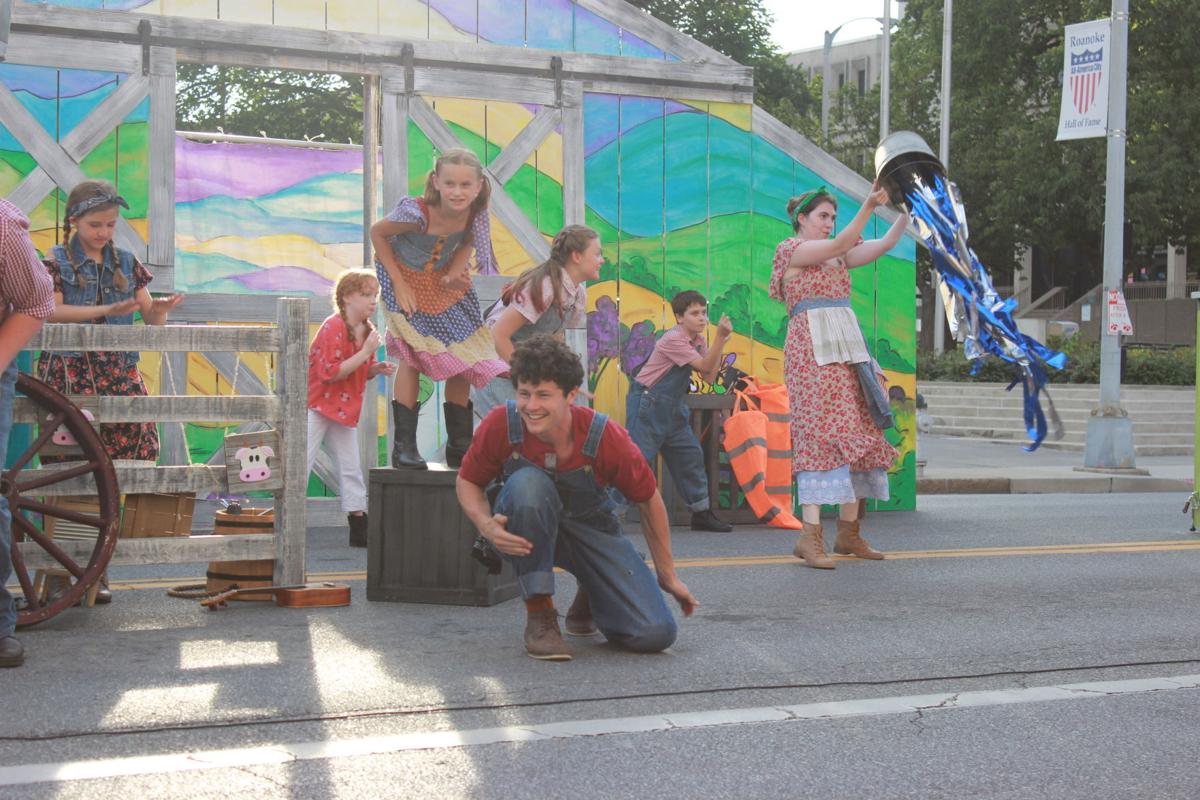 Joel Hadden as Jack and the company of “Jack and the Wonder Beans” at Roanoke Children’s Theatre, directed by Pat Wilhelms. 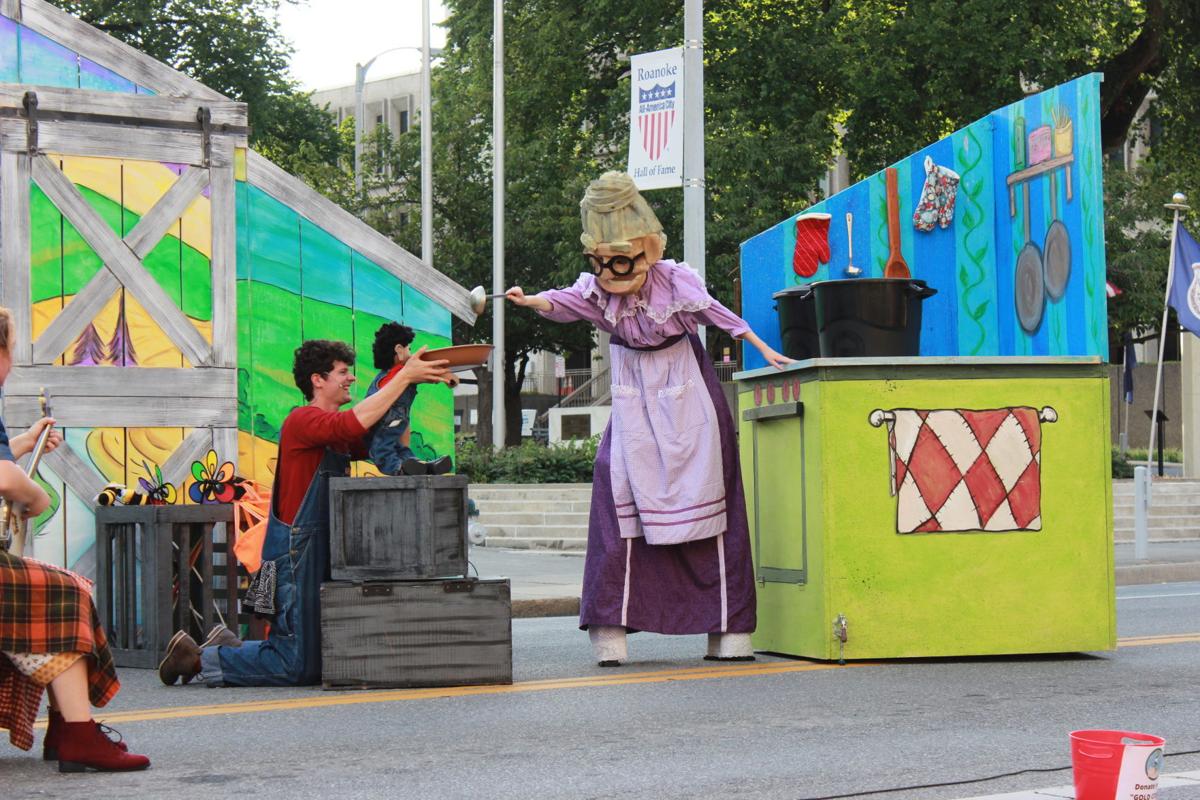 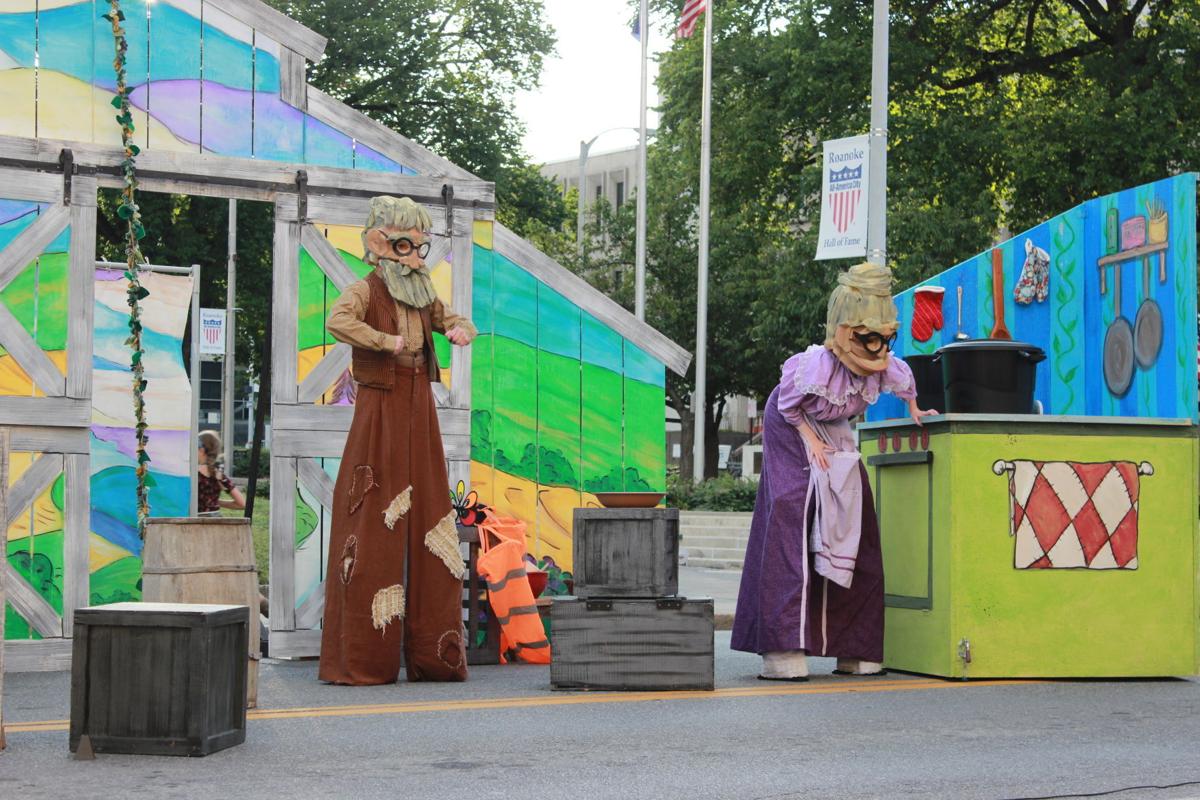 If there’s one thing this age of coronavirus is teaching us, it’s to be open to new ways of doing things: working from home, gathering friends via the internet, trying new hobbies when old ones are off limits, and so on.

For Roanoke Children’s Theatre, one new way of doing things has been to mount outdoor performances of its current show, “Jack and the Wonder Beans” — a charming hourlong Appalachian-themed telling of the familiar fairy tale, that will have grown-ups smiling as much as the little ones.

An afternoon rainstorm made way for a mercifully mild summer evening Friday for a production that took place on Second Street in front of Greene Memorial United Methodist Church. Audience members needed to bring their own lawn chairs, and several dozen did just that, spreading out along the sidewalk and the church porch. (COVID-related precautions, such as requiring masks, were also implemented.)

After a brief delay to let the church chimes complete their 7 p.m. cycle, the show got underway with a lively opening dance number by the company. Although the show was not a musical per se, traditional folk music was a unifying element throughout. With a lovely voice and engaging energy, Shelby Mason was a delight as the Storyteller, who drove the unfolding plot and even encouraged some audience participation — a roving troubadour-narrator playing her own stringed instruments as she went.

Joel Hadden gave the title character a fitting insouciance as he tumbled his way from family poverty to fantastical adventure. Emma Sala played dual roles as Jack’s beleaguered Mam as well as the High Tall Giant Woman of the beanstalk world, bringing a wonderful sass to both parts. David Ratliff channeled his inner curmudgeon to comedic effect as the High Tall Giant Man. Both he and Sala had to navigate the action wearing stilts and costume heads reminiscent of oversized apple-face dolls.

Other members of the company included Grace Eakin as a Farmer’s Wife and as the Chicken Lady, whose hens provide one of the show’s cute visual motifs. Zachary Conklin also had two roles, as a Vagabond and as the Bank Teller, who is part of a learning moment of sorts for young audience members. Beahlen Deacon is utterly adorable as Cow #1 (the one that gets traded for the magic beans), with Drew D’Alessandro and Riley Whisnant having fun with their roles as Cows #2 and #3. Brynne Wiegard gently clucks and flaps as the Hen that lays golden eggs in the giants’ lair. The other Hoe Down Dancers include Mikayla Parker, Hannah Cecil, Lakota Creasy, Olivia Goodman and Kristen Kay Smith, whose fiddle-playing enhances the show’s score.

It’s impossible to hold any kind of activity outside without a few intrusions of the real world, and there was a mild degree of traffic noise and such. But to the great credit of the entire cast and crew, no one broke concentration for a second. If anything, the challenge of the unconventional setting seemed to solidify the ensemble’s unity. An example we might all take to heart.

Roanoke artist Sarah K. Parcell, 26, has set up a pop-up solo exhibition of large-scale portraits, titled “NAKED,” in what was previously an empty structure in southeast Roanoke.

"Running a mile each morning has been curtailed by COVID, so I am working on getting The Pet Set re-released, and feeding the two ducks who come to visit me every day."

“Dopesick,” an eight-episode limited series for Hulu based on Virginia author Beth Macy’s best-selling book, is now filming around Richmond and will continue through May.

Dustin Diamond of 'Saved by the Bell' hospitalized with cancer

Dustin Diamond, who played Screech on the popular 1990s high school comedy "Saved by the Bell," is hospitalized with cancer, his manager said.

The beloved comic actress, who died in December from COVID-19, had some surprising Roanoke Valley ties — her manager, Leonard Carter, grew up in Daleville, and the co-author of her 2014 advice book "What Would Mary Ann Do?" lives in Roanoke.

When he was 15, Sam Merkle moved from Richmond to New York City to attend the prestigious School of American Ballet.

Canceled TV shows 2021: Which of your favorite series are coming to an end?

(TNS) — The TV show American Pickers will be filming in North Carolina in March, and they're looking for people with large antique collections to be on the show.

German news agency dpa is reporting that that illusionist Siegfried Fischbacher, the surviving member of duo Siegfried & Roy, has died in Las Vegas at age 81.

See what's happening online and in person this week in the Roanoke and New River valleys.

'If I were president': Celebs reveal things they would tackle if in office

'If I were president': Celebs reveal things they would tackle if in office

Joel Hadden as Jack and the company of “Jack and the Wonder Beans” at Roanoke Children’s Theatre, directed by Pat Wilhelms.