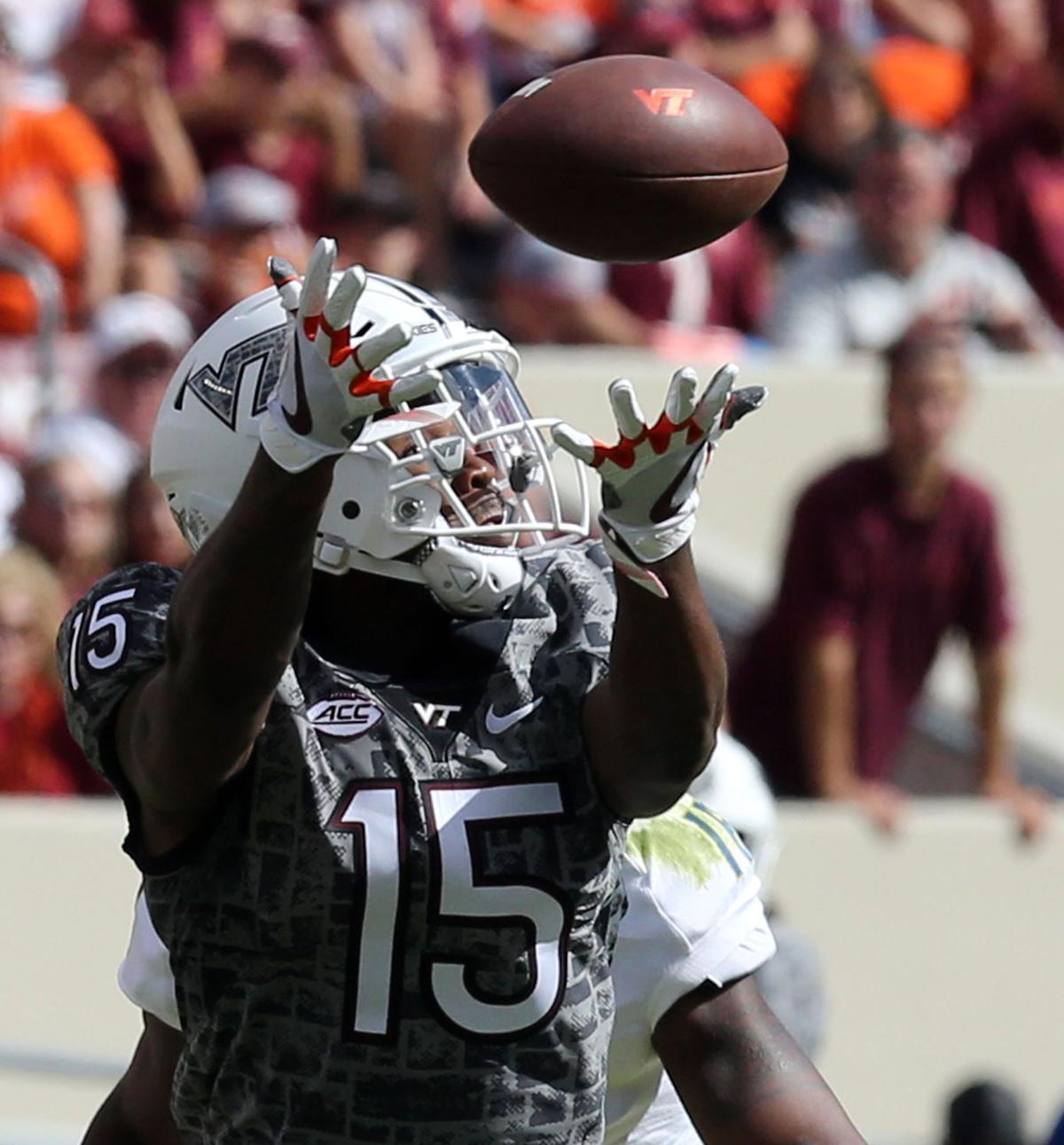 Virginia Tech wide receiver Sean Savoy reaches for a pass from quarterback Josh Jackson during the first half of Saturday’s home opener against Delaware in Blacksburg. Virginia Tech won 27-0. 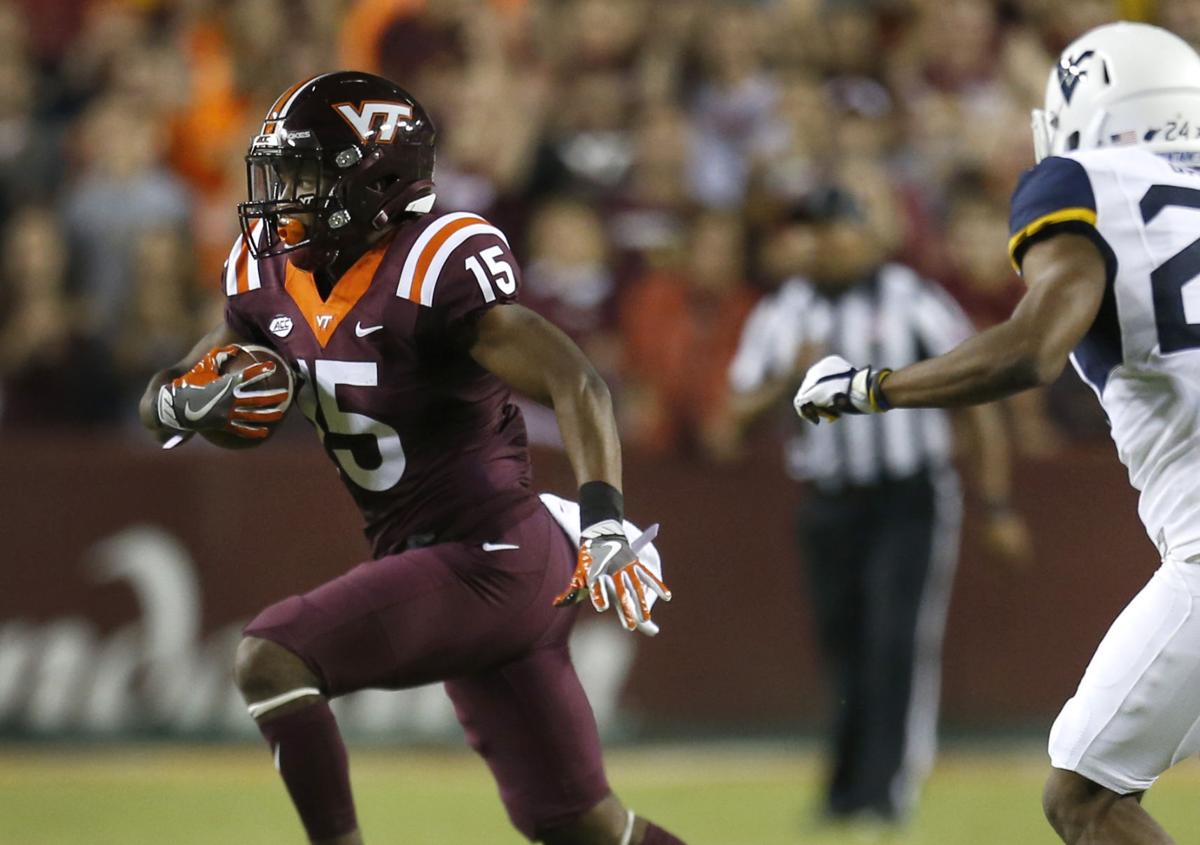 BLACKSBURG — Josh Jackson wasn’t demonstrative or demeaning when he came up to Sean Savoy after the receiver’s first-quarter drop on a deep ball in Virginia Tech’s game against Delaware last week.

The Hokies quarterback just tapped Savoy on the helmet and let him know that’s a play he needs to make, vowing to get him another one.

Savoy didn’t need the reminder. It was still eating at him that a likely 58-yard touchdown slipped through his hands after a Delaware defender caused enough of a distraction as he jumped to try to tip it.

“I lost track of it, but it was a play that should have been made,” the freshman receiver said. “I’ve got to make them plays to stay on the field. It bugged me for probably a good quarter.”

To Savoy’s credit, he rebounded well. About a quarter later, he went up high to make a 38-yard catch across the middle, which set up Travon McMillian’s touchdown run to put the Hokies up 17-0 in the eventual 27-0 win.

In all, Savoy had four catches for 63 yards, the second straight game he’s finished second on the team to Cam Phillips in receiving yards. For a team desperately looking for reliable receivers beyond Phillips, it’s an encouraging sign.

“He’s still working on some of the nuances of playing the position, but he went up there and made the big catch there in the first half and continues to, I think, feel more comfortable,” Hokies coach Justin Fuente said. “We continue to push him in his practice habits. It’s just a little bit different for him week in and week out, but he’s a smart young man that cares and wants to do well, so I’ve been pleased with that.”

Finding additional receivers to complement Phillips and C.J. Carroll was all the talk of the offseason, with the Hokies searching for replacements for the departed Isaiah Ford and Bucky Hodges.

Most of that talk centered on players who had either gotten here last year (Henri Murphy, Eric Kumah and Phil Patterson) or freshmen who enrolled in the winter in order to go through spring ball (Kalil Pimpleton).

But it’s been the 5-foot-9, 188-pound Savoy, a playmaker from Washington, D.C., who scored 22 touchdowns as a senior for Woodrow Wilson High, who’s hit the ground running since enrolling this summer, taking advantage of every opportunity given to him, with a little assist from receivers coach Holmon Wiggins.

“Right when I was about to come [to Virginia Tech], I think it was like a week or two, Coach Wiggins actually came to my house down in D.C. and we just went over plays rapidly on an iPad,” Savoy said. “Every day at 8 o’clock, 9:30, after I’d come home from practice and everything. So we actually just went over it and just got to it, basically.”

Knowing the offense wasn’t the only hurdle. Savoy thought he was in good shape from a strength standpoint, but the conditioning part of college ball wore him out at the beginning of August.

He’s since adjusted and has been a quick enough study that Tech has worked him at both the slot and outside receiver spots so far this season.

The results have been encouraging. Savoy had four catches for 42 yards in the opener against West Virginia at FedEx Field, a special day for the Redskins fan who was actually making his second appearance on the field. He played there during a halftime long ago in Pop Warner ball. Did he dominate?

“I always dominate,” he said with a laugh.

He got the start last week against Delaware and, in addition to his long catch in the second quarter, had two more grabs that went for first downs.

“He can catch the ball well, he runs great routes and he’s hard to tackle,” Jackson said. “Those things all together make a pretty decent receiver.”

It’s a mixed bag beyond the top targets in the Hokies’ receiving corps. Phillips, Savoy and Carroll have combined for 26 catches, 402 yards and two touchdowns this year. The only other receiver on the roster who’s caught a pass is graduate transfer James Clark, who has one grab for 8 yards.

That’s far from the six to eight receivers the coaching staff would ideally like to have at their disposal. But after an offseason in which the question was who, beyond Phillips and Carroll, would emerge, Savoy’s fast start is at least a positive.

An ineffective passing game hurt the Hokies when they got to red zone on Saturday.

McFarling: Hokies' quest for No. 2 begins in earnest

Now's the time to bear down, to have a shot at playing Clemson for the ACC championship.

Virginia Tech wide receiver Sean Savoy reaches for a pass from quarterback Josh Jackson during the first half of Saturday’s home opener against Delaware in Blacksburg. Virginia Tech won 27-0.