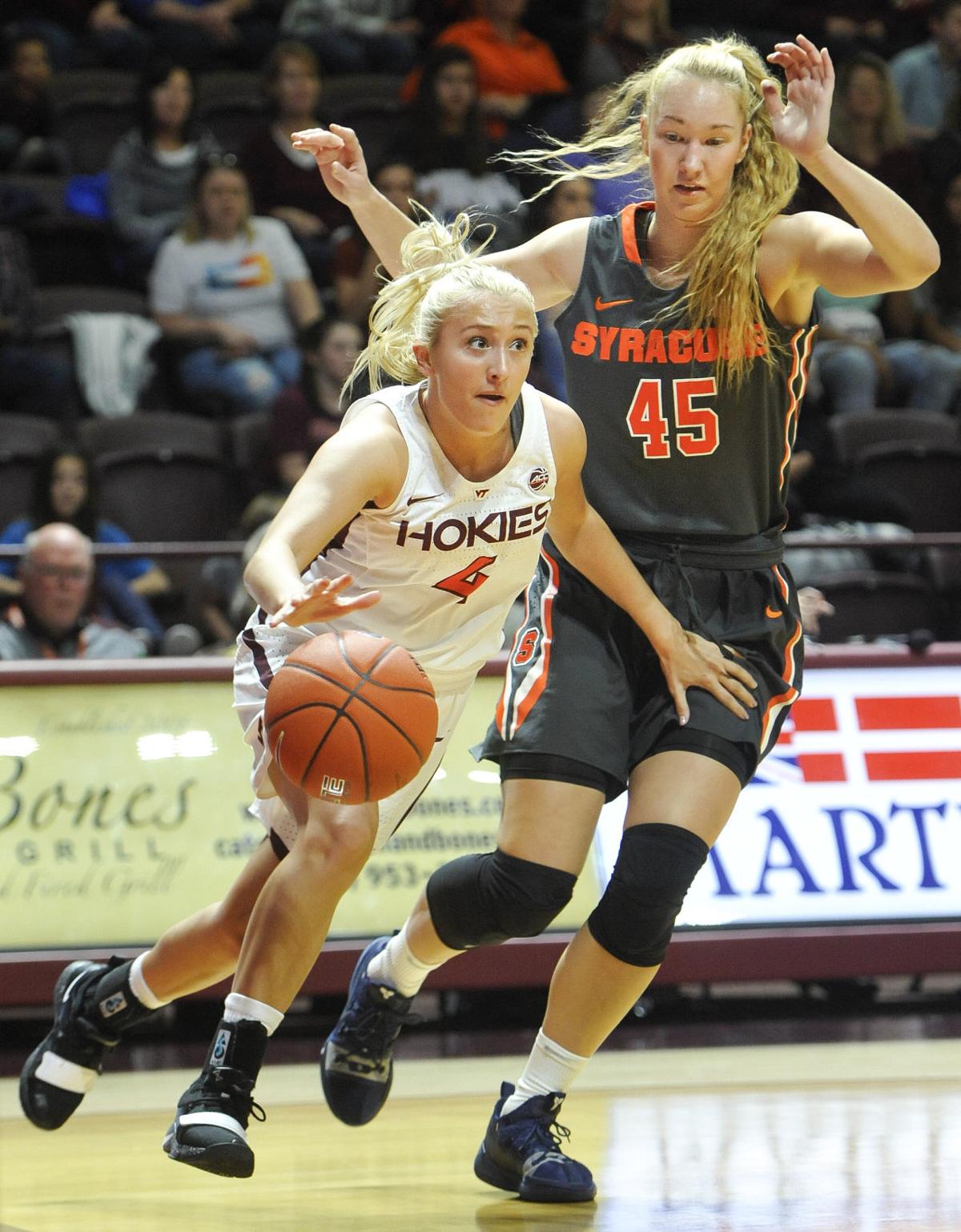 Virginia Tech point guard Dara Mabrey (4) will square off against her sister Marina when the Hokies host No. 1 Notre Dame on Wednesday. 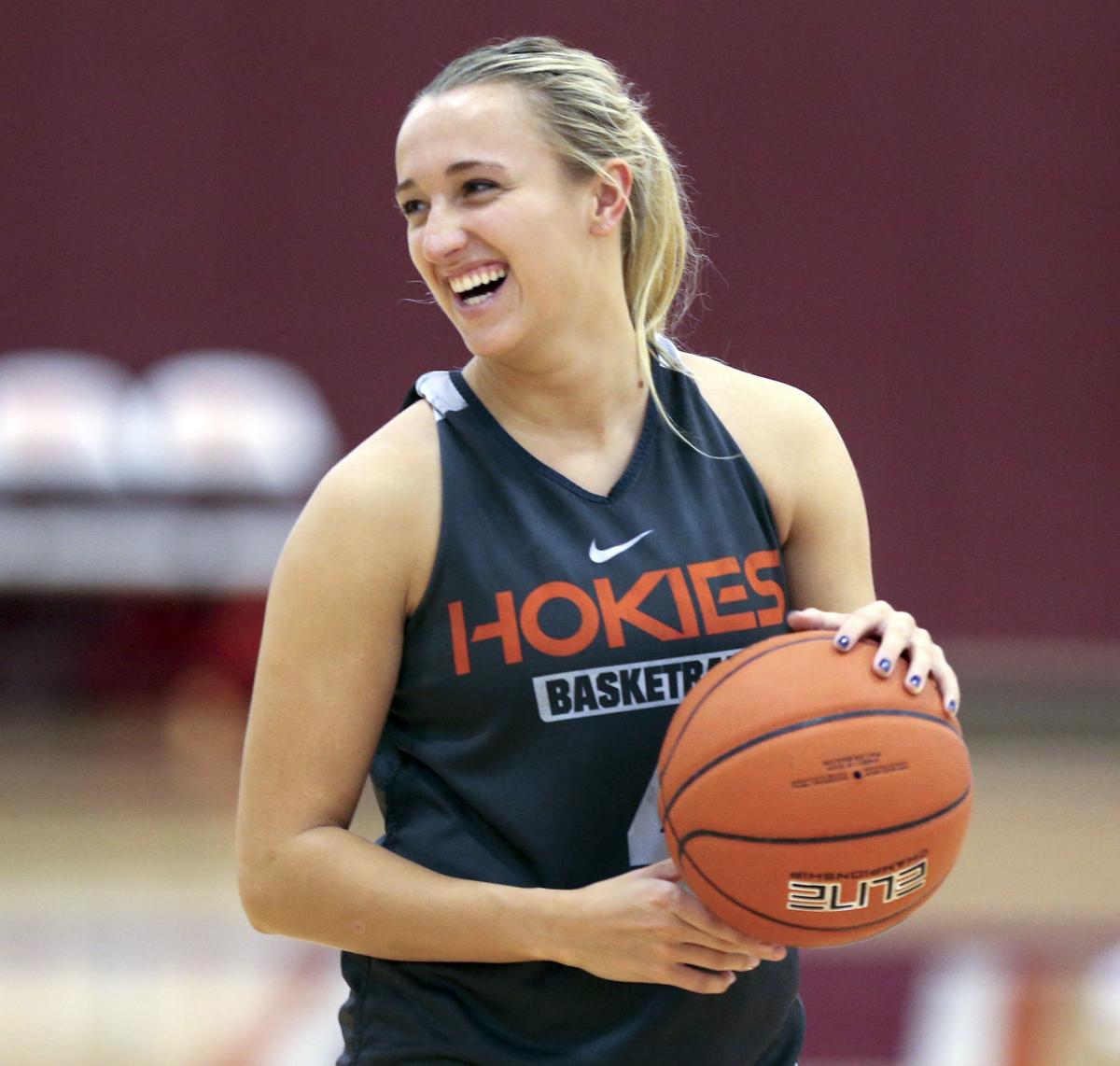 Dara Mabrey of the Virginia Tech women's basketball team (shown in practice) will square off against her sister Marina when the Hokies host No. 1 Notre Dame on Wednesday. 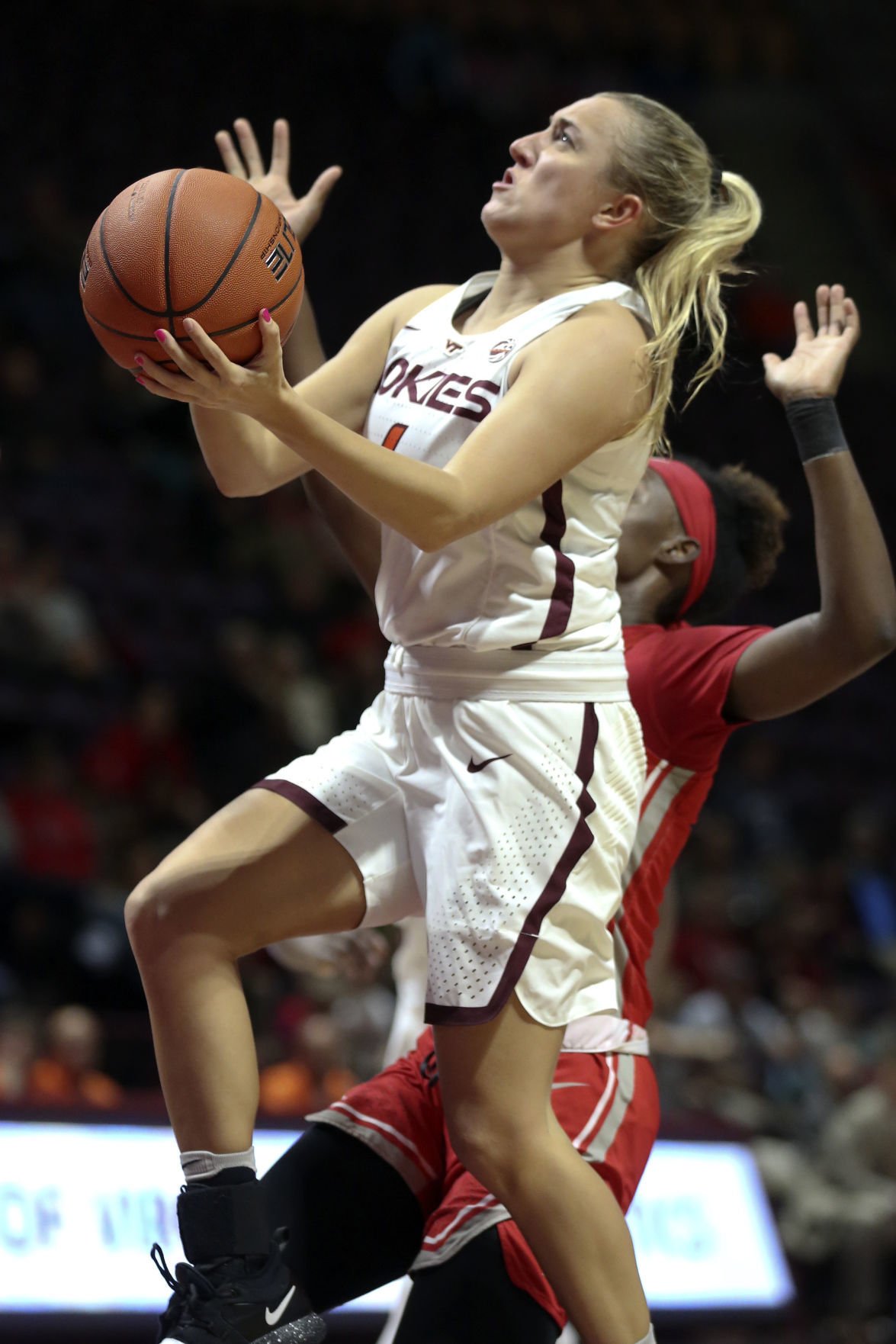 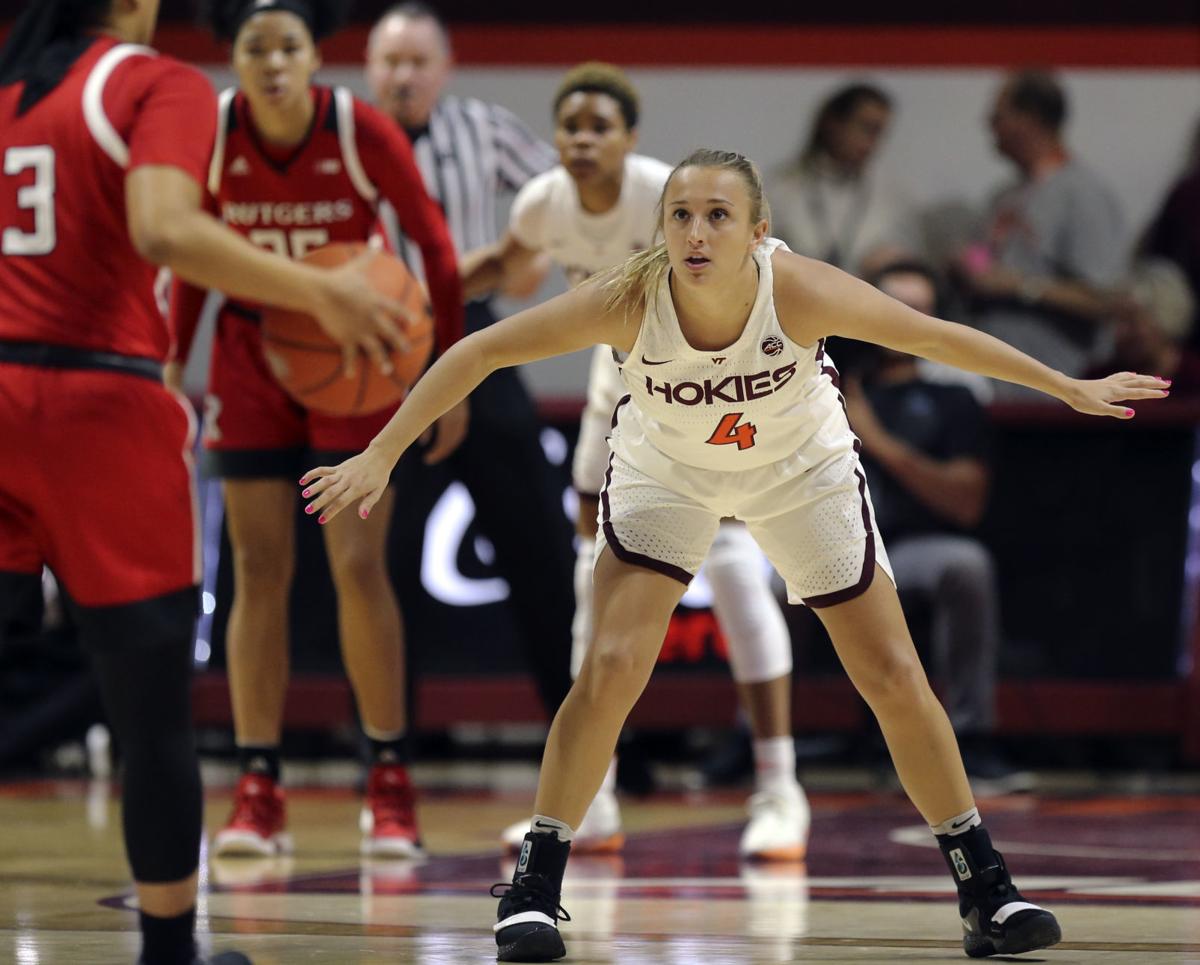 BLACKSBURG — It remains to be seen whether No. 1 Notre Dame’s visit to Cassell Coliseum on Wednesday will become a memorable part of Virginia Tech women’s basketball history.

But it will certainly be a memorable night for the Mabrey family.

“I’m excited to just see her in general. Obviously we’re excited to play against each other,” Dara said this week.

Marina, a senior, said each is the other’s biggest fan.

“I know she admires me a lot,” Marina said in a phone interview. “I try to be a good example for her.”

The two have never before squared off against each other.

Well, not in a real game.

“I’ve never been on the opposite team,” Dara said. “We were always just either playing against each other to get better at home, or we were on the same team in high school.

“At home, in the driveway and in the gym, I would always want to play against her because it was going to make me better.”

To commemorate Wednesday’s game, Marina has created three T-shirts. The front says “Hokies” with Dara’s No. 4, and the back says “Irish” with Marina’s No. 3. She is keeping one for herself, and planned to give the others to Dara and their mother, Patti, on Tuesday night when they meet at Notre Dame’s hotel.

Patti Mabrey will wear her T-shirt in the Cassell stands Wednesday.

“I know she’s sitting behind our bench because she’s using my tickets,” Dara said.

“I only can hope that both play well,” Patti Mabrey said in a phone interview. “I’ll be cheering for both of them.”

The girls’ parents will both make the trip from Belmar, New Jersey, for the game. Roy Mabrey was going to have to miss the game for work reasons but got a last-minute reprieve.

Wednesday’s game — the lone regular-season meeting between the teams — was a “huge topic” when the family gathered for Christmas, said Dara.

The girls’ siblings will not be on hand Wednesday, though.

Eldest sister Michaela, a former Notre Dame standout, will have to miss the game because of her duties on the LSU women’s basketball staff.

“All the kids compete against each other,” said their mother. “When they come home for Christmas, it’s the annual one-on-one game where they just do a round-robin. Whoever wins stays on the court. It gets pretty heated.”

The five siblings have always been competitive with each other.

“Growing up, losing to a sibling probably hurts more … because you’ve got to hear it the rest of the day, like ‘I beat you one-on-one, so I get to sit in the front seat,’” Dara said.

“When everybody’s going to this party and that party, they’re going to the gym,” she said. “Everybody has a level of dedication and a work ethic.”

As high school teammates, Dara and Marina used to get up early and shoot with each other at the school gym.

“We’re still really close now,” Dara said. “I talk to her every single day. I watch all of her games. Even if I can’t watch them [live], I’ll record them. She does the same for me.

“Our family is just a huge support system. … If I’m going to turn to somebody, it’s going to be my family first, and it’s usually Marina.”

The sisters might have to guard each other on Wednesday.

“I know a lot of her movements, she knows a lot of mine. So it will be a good matchup if we do face each other in that man-to-man setting,” Dara said. “On defense, too, I know what she’s going to do, just because I’ve played against her at home and have watched everything that she does.”

Because of her sisters, Dara is used to rooting for Notre Dame.

Marina averaged 14.4 points last season, when she made the All-ACC second team and helped Notre Dame win the NCAA title. She is averaging 14.1 points for Notre Dame (16-1, 4-0) this season.

“Marina is fearless,” said Dara, who was in the stands at the Final Four last year. “She’s a point guard that can do everything. She can score, she can pass, make her teammates better, run the offense with a defender on her the whole time.”

Marina and teammates Arike Ogunbowale, Brianna Turner and Jessica Shepard are all expected to be taken in the top two rounds of the WNBA draft this year.

“I know them all really well,” Dara said.

After watching each other’s games, Dara and Marina will offer each other pointers on the phone.

“I don’t want to her to shoot into my face, so I’ve got to get my hand up,” Marina said. “She shoots it into my face a lot at home.

“When we were younger and stuff, it was competitive. … She broke my tooth when I was in fifth grade.”

Bragging rights will be on the line again on Wednesday.

No. 1 Notre Dame at Virginia Tech

Notes: This is just the second time that the nation's top-ranked women's basketball team has visited Cassell. Then-No. 1 UConn won 59-50 at Tech on Jan. 29, 2002. … Tech is 0-9 all-time against No. 1 teams, with the most recent meeting coming in 2007 at Duke. … Tech has lost six straight games in the series. … The Hokies are on a three-game losing streak. Their foes have gone 51 of 72 combined from the free-throw line in this span, while Tech has gone 15 of 17. … Tech has made a total of 54 turnovers in this losing streak. … Notre Dame has won nine straight games since suffering its lone loss to UConn. … Notre Dame is averaging 88 points. … Notre Dame coach Muffet McGraw has 904 career wins. … Ogunbowale, the runner-up for 2018 Associated Press Female Athlete of the Year, has scored more than 2,100 career points. Last season she was an All-American and the Final Four Most Outstanding Player. She was the ACC female athlete of the year for the 2017-18 school year.

Virginia Tech point guard Dara Mabrey (4) will square off against her sister Marina when the Hokies host No. 1 Notre Dame on Wednesday.

Dara Mabrey of the Virginia Tech women's basketball team (shown in practice) will square off against her sister Marina when the Hokies host No. 1 Notre Dame on Wednesday.