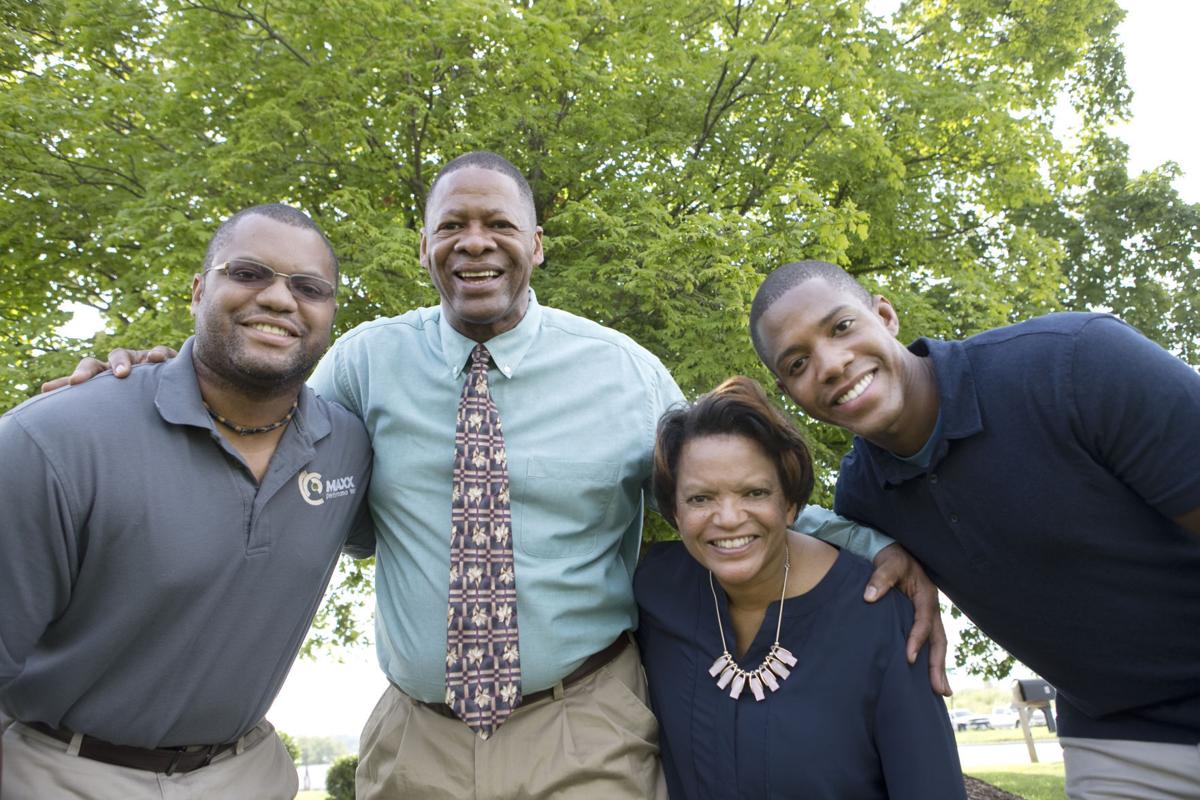 The Samuels family — Winston and his wife, Marilyn, at center with their sons Courtney (left) and Joel — are all Virginia Tech Hokies and together own and operate Maxx Performance, a Roanoke company that uses microencapsulation technology to improve the taste and shelf life of foods. 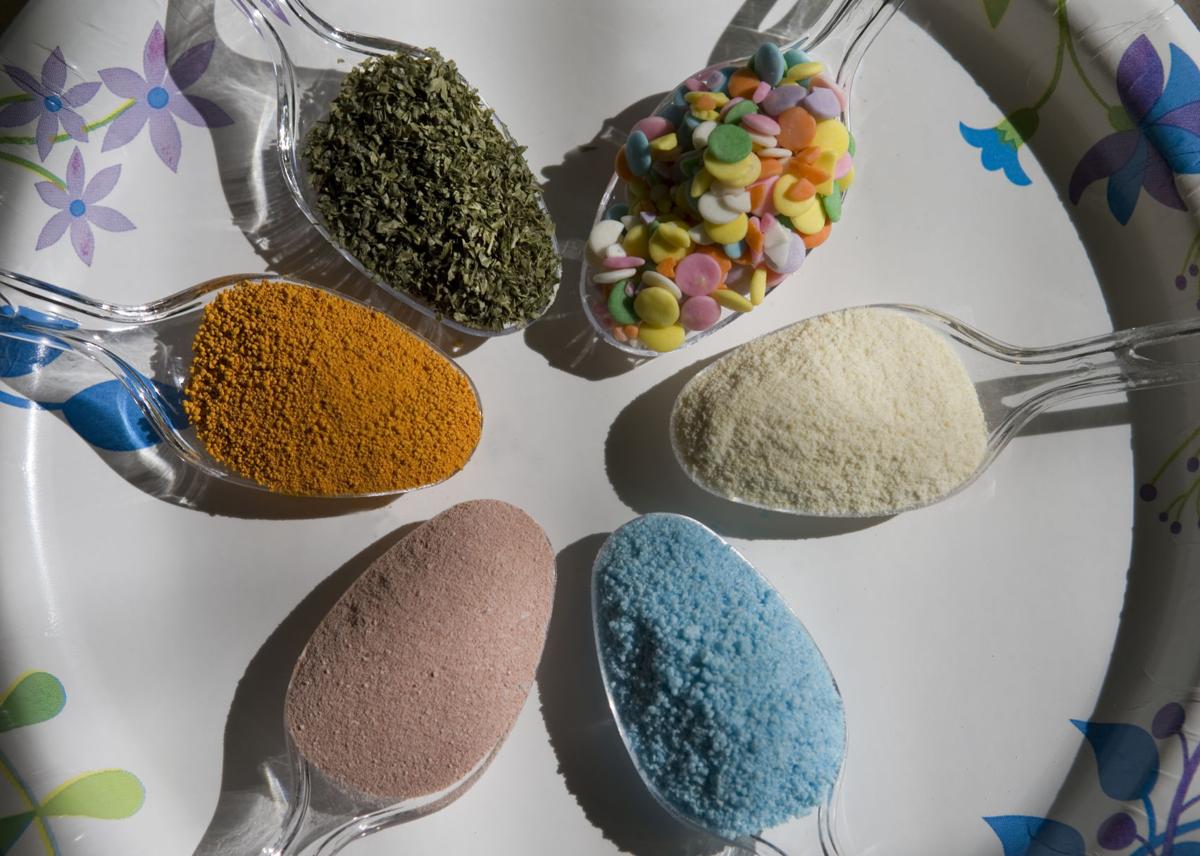 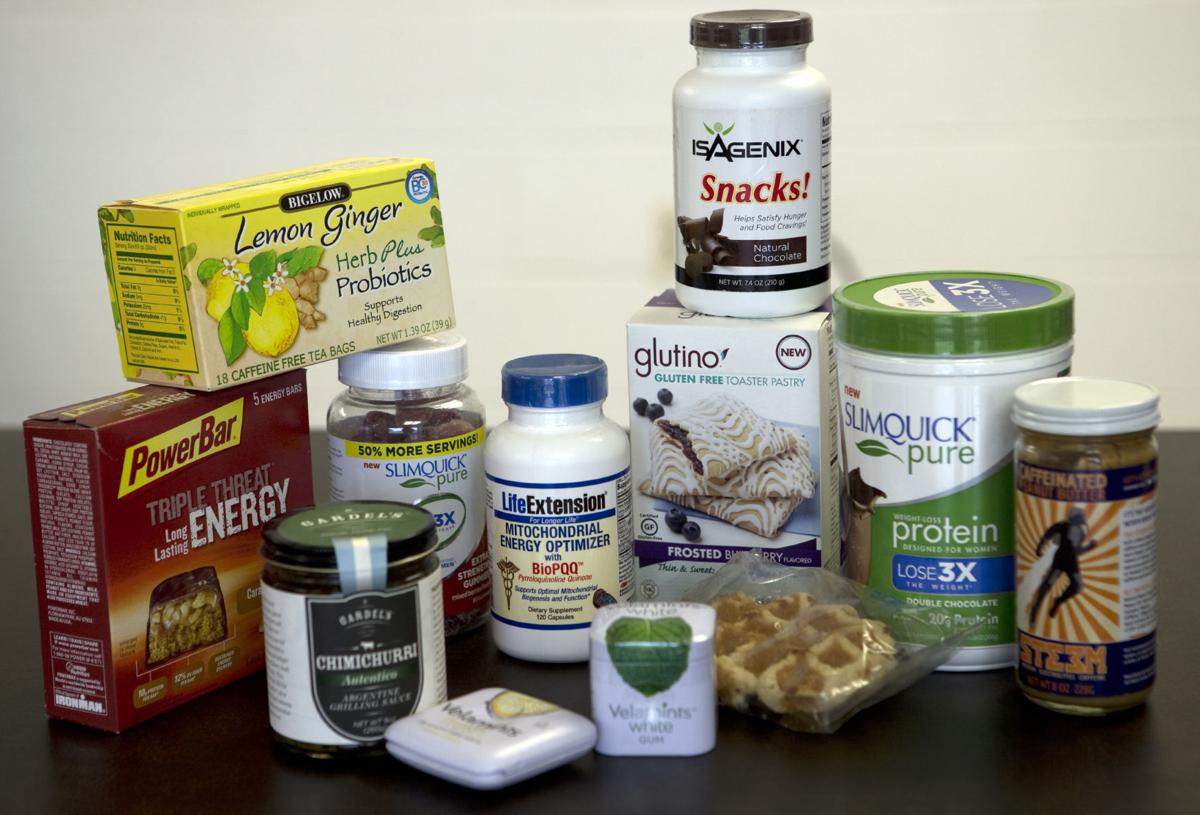 A sampling of products containing ingredients developed by Maxx Performance, a Roanoke company that uses microencapsulation technology to improve the taste and shelf life of foods.

We take a lot of things for granted at the grocery store.

When we buy a package of dinner rolls or sliced bread, we expect them to be soft and without mold. We plan on tortillas separating easily when we take them from the bag.

We strew sprinkles on our cupcakes and expect the colors not to leach into the icing. We expect protein bars to taste like cookies, not like soybeans or whey. We want a powdered diet supplement to taste like a creamy shake, not a mouthful of vitamins. If we eat a chocolate energy bar, we hope for sustained stamina, not caffeine jitters followed by a lethargic crash.

None of that happens by magic.

Behind every bagged stack of tortillas, every shaker of rainbow sprinkles and every box of chewy protein bars is a scientist who has researched how to enhance shelf life, keep colors from running, mask flavors or slowly release nutrients.

On a visit to Roanoke technology company Maxx Performance, CEO Winston Samuels poured what looked like a greenish gray powder into my hand. It was green tea extract used in diet supplements and baked goods.

Normally, raw green tea extract tastes awfully bitter. But the “powder” Samuels had me taste had no flavor. That’s because it wasn’t actually powder at all: It was fine granules of the extract, each individually coated to make them tasteless. It means I can sip a weight-loss drink or munch a health bar if I want, my taste buds blissfully unaware of the granules that will give me the benefits of green tea without the bitter taste.

“We’re the company behind the company with a secret,” said Courtney Samuels, sales and marketing director for the company his parents located in the Roanoke Valley six years ago.

Within the unassuming, low-slung industrial building on Aerial Way Drive, 10 to 15 people work in a plant whose proprietary technology is well-guarded from prying eyes. Maxx Performance has customers in 30 countries who call on its expertise to make foods taste better, lengthen shelf life and ramp up nutritional content while enhancing palatability.

The company was started by Virginia Tech graduates Winston and Marilyn Samuels 13 years ago in Wisconsin. Winston Samuels, a native of Jamaica, studied animal and poultry sciences at Virginia Tech, earning his doctoral degree there in 1983. After working in research and commercial development for Balchem Corp. and for Monsanto in three countries on two continents, he and his wife launched Maxx Performance to put his knowledge of nutrition to work using microencapsulation to enhance the quality and nutrition content of foods for both humans and animals.

Wishing to move closer to their alma mater — where he was named an outstanding Virginia Tech alumnus and both are in the College of Agriculture and Life Sciences Hall of Fame — they relocated Maxx Performance’s manufacturing plant and research and development division to Roanoke in 2010. The company is a family operation — all Virginia Tech graduates — with Winston as CEO, Marilyn as corporate controller, and sons Courtney and Joel as sales and marketing director, and innovation and business development manager, respectively.

If you’ve ever taken a pill in capsule form, you have an idea of what Maxx Performance does. The capsule you take is designed to dissolve in your stomach, slowly releasing the medicine inside.

Ever seen animal feed in pellets? Those pellets are coated so that the nutrients reach the animal’s digestive system at exactly the time when it does the most good, eliminating overuse of antibiotics and helping the animal process its food efficiently.

Now imagine it on a smaller scale, and you have microencapsulation. Those colored sprinkles, for example, are each encased in a plant-based coating that keeps the colors from prematurely blending into a gray puddle on your cupcake icing.

The company explains microencapsulation on its website, www.maxxperformance.com: “We cloak the active ingredients in your product with a protective food-grade shell the size of a human hair. This creates a barrier to preserve the ingredients during food processing — and the ability to release them at just the right moment for maximum effectiveness.”

In the Roanoke plant, employees blend additives — vitamins, for example — with a coating agent made from an oil extracted from plants (that’s the proprietary part, but Winston Samuels says it is plant-based and considered natural.) “It’s like making candy,” Samuels says. Once the mixture gels or hardens, the result is a free-flowing product (think of those colored sprinkles, or imagine salt that pours easily from the box) that is then shipped to a customer for use in food manufacturing.

As a facility that processes food ingredients, the plant is subject to strict sanitation rules. Technicians wear gear such as hair nets, lab coats, goggles and gloves and walk through a foot bath before entering. The encapsulated products go through quality control tests in an adjoining research and development lab before shipping.

A California bakery once came to Samuels with a problem: They topped their pastries with sugar before baking, but by the time the baked goods reached the customer, the sugar was dissolved into a soggy top crust. Microencapsulation to the rescue: Maxx Performance coats each individual sugar crystal so that it stays crunchy until the consumer bites into it.

“People ask if we manufacture sugar,” says Marilyn Samuels. “Yes and no. It’s not that we keep an inventory of sugar.” Instead, the company procures only the amount of sugar or other product the customer needs, processes it and sends it along.

The technology Maxx Performance uses is put to work on a more far-ranging scale than sugar sprinkles.

Bread bakers will probably understand this illustration: When I use my bread machine, the bread tastes really good when it’s fresh, but it’s not as good the next day. Compared with the dough I mix by hand and let rise for as long as it needs, the machine-made bread takes a larger amount of yeast so that it rises quickly, but the loaf doesn’t stay fresh for more than a day or so.

Leavening agents such as yeast or baking powder can be encapsulated for use in manufactured bread and cookie dough so they don’t prematurely react with other ingredients, and instead are released at the right time and temperature during baking, resulting in a softer, fresher-tasting product. And bakers can save money by using up to 25 percent less leavening in their dough, Winston Samuels says.

The technology also enables food manufacturers to inhibit mold growth in products such as muffins, tortillas and breads, resulting in longer shelf life.

If you’ve eaten a juicy, delicious hamburger at a famous fast-food chain, you’ve tasted Maxx Performance technology. Common salt added to beef before cooking makes the meat tough and it loses its appealing pink color, Winston Samuels says. Encapsulated salt releases its effect on flavor later, during the cooking cycle, and the result is a juicier, more tender burger.

“We’re a small company, but we are impacting lives globally,” Winston Samuels says.

Paul Siegel, Virginia Tech professor emeritus of poultry genetics and behavior, knew Winston Samuels as a student at Virginia Tech and remembers him as “a very entrepreneurial, bright guy.”

Siegel says that as the world’s population grows and is on the move, with not everyone having access to fresh foods, there will always be a need for products with extended shelf life. The Roanoke company is one of the places with “the right technology and excellent quality control and customer services” to provide that, says Texas biotechnology consultant Natale Vittori.

For more information about Maxx Performance and its research, visit www.maxxperformance.com.

Maxx Performance develops technology for food and feed manufacturers and does not sell to consumers. But if you’ve had any of the items on this list, you may have eaten products the company has had a hand in:

Soft bread and tortillas that don’t quickly get moldy

Cheese that has reduced sodium content without adversely affecting flavor

The Samuels family — Winston and his wife, Marilyn, at center with their sons Courtney (left) and Joel — are all Virginia Tech Hokies and together own and operate Maxx Performance, a Roanoke company that uses microencapsulation technology to improve the taste and shelf life of foods.

A sampling of products containing ingredients developed by Maxx Performance, a Roanoke company that uses microencapsulation technology to improve the taste and shelf life of foods.