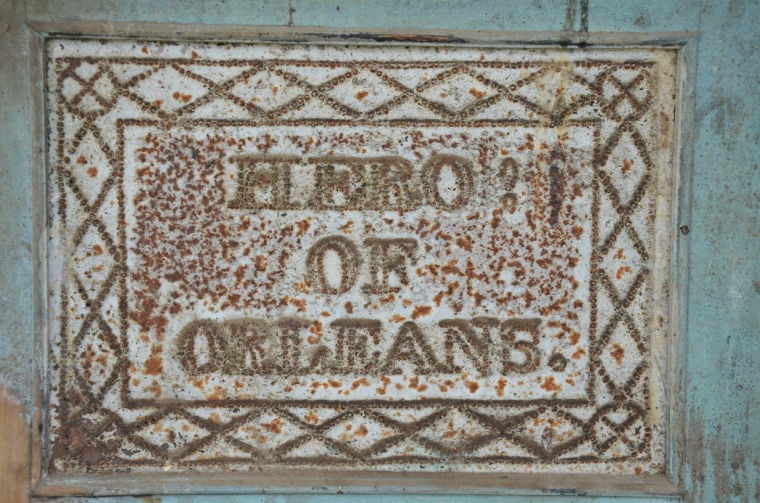 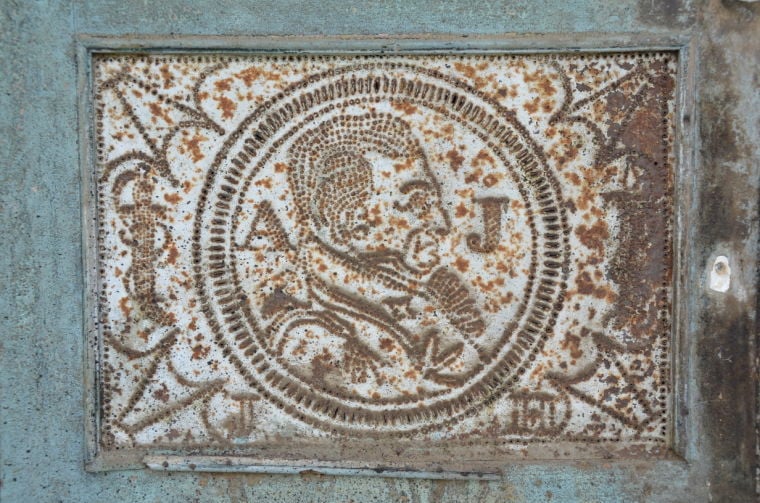 A detail of Andrew Jackson on a 19th-century pie safe built to promote his presidential campaign. 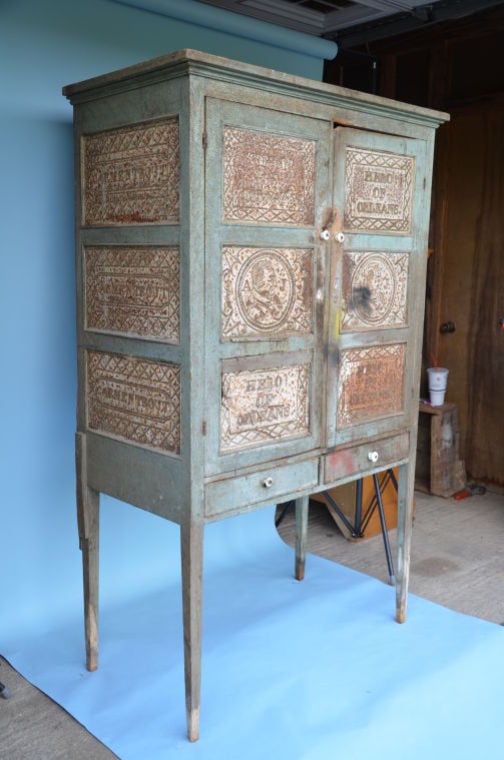 This 19th-century pie safe, which was built in Lexington to promote Andrew Jackson’s presidential campaign, recently sold at auction in Clifton Forge for $102,500. 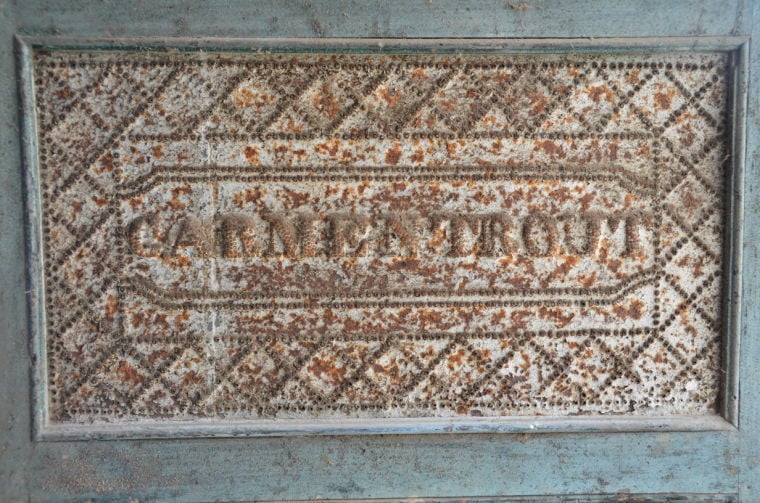 Pie safes were made with punched tin panels, which helped prevent mold and mildew from ruining the food stored inside.

Word spread among antiquities collectors nationwide that a rare find was on the auction block in Clifton Forge. At the same time, the gossip around Alleghany County was that an old kitchen cupboard, not all that different from great-grandma’s, would bring a handsome sum.

Five bidders were among the hundreds of spectators gathered at the armory on July 19. Four others were on the phone, each anxious to own the 19th-century “pie safe.” Unlike grandma’s ubiquitous food safe, this one was special. Crafted by the finest Shenandoah Valley tradesmen of the day, it was commissioned not only to keep food safe from vermin but to promote Andrew Jackson’s presidential campaign.

“A lot of the local people knew this was supposed to be a big deal. When Brandon, my husband, opened at $20,000, some of the local people laughed,” said Gail Nicely of Nicely’s Auction Co. But as the price climbed in $5,000 increments to $50,000, tension rose with it. Bidders dropped out and nobody was joking.

All told, just a few minutes had ticked off the clock before Burt Long, an antique dealer from New Market, accomplished what he set out to do: purchase the one-of-a-kind pie safe. At $102,500, Long said he paid more than he had hoped, but less than he would have paid.

That sentiment was confirmed by Kurt Russ, who with his business partner, Richard Neel, has since acquired the safe from Long. Russ said Long was bidding for him at the auction.

“We recognized some of the other people bidding. There was an Andrew Jackson collector from Tennessee and several prominent dealers from the East Coast,” Russ said. “We knew there would be competition. We didn’t know how stiff. We wanted to purchase it and own it and see that it’s conserved as iconic Shenandoah folk art.”

“One hundred and two thousands dollars is ridiculously high and is absolutely the highest amount received for any pie safe on Earth,” said Ken Farmer, owner of Ken Farmer Auctions and Appraisals in Salem, who regularly appears on the national PBS television show “Antiques Roadshow.” About $50,000 is the most anyone’s paid before for a food pie safe.

That’s because its date of origin is early for a pie safe, the maker and owner are known, and its blue paint — a color favored by collectors — is untouched, he said. With the exception of some rust on one of the tins and a touch of over spray that must have come when someone painted another object nearby, the safe is unmarred.

Russ is a former director of Washington and Lee University’s laboratory of anthropology and lives outside Lexington. He collects Americana, collaborated on The Virginia Safe Project and is co-curator of the “Safes of the Valley” exhibit at the Museum of the Shenandoah Valley in Winchester.

The term “pie safe” came into fashion long after the Jackson safe was made, Russ said. Food, linens and anything else could be protected from vermin in cabinets set on legs. The punched tin ventilation prevented Virginia’s humidity from allowing mold, mildew and mustiness to set in.

In 1824, a decade after Andrew Jackson saved New Orleans from a British invasion during the War of 1812, he began a campaign to capture the White House. That same year, a Covington man by the name of George Armentrout opened a tavern along the Covington and Lexington turnpike.

To furnish it, Armentrout commissioned Lexington cabinet maker Matthew S. Kahle and London-trained tinsmith John Henson to build a food safe that would lend political support to Jackson. A profile of Jackson and a panel declaring him Hero! of Orleans were punched into the tins.

Back then, political slogans and images were likely to turn up on pottery and quilts. Armentrout’s food safe would have attracted notice and served as a conversation starter, Russ said. Long, who said he’s bought hundreds of food safes during his 35 years as an antiques dealer, guesses the safe might have originally cost $12 to $18.

Whether Jackson ever saw it is anyone’s guess, but Russ said the Tennessean was an overnight guest at a Lexington tavern and might have also stopped at Armentrout’s tavern in Covington.

At any rate, the Jackson food safe remained in the Armentrout family, and at some point was moved to a relative’s farm along the Cowpasture River in Botetourt County. In the 1930s, Marion Nicholl Rawson wrote of it there in “Candle Day Art.”

“She talked about going to a house across the Cowpasture River and included a sketch,” Russ said.

About that time, it’s speculated, the family moved the cabinet to a log building, just across a field and a swinging bridge. That’s where it was when the Knick family bought the farm at auction 60 years ago and that’s where it remained when Hattie M. Knick died earlier this year and her daughter contacted Nicely’s Auction to appraise the estate.

“Many of the things in the outbuildings had been there when her mother and father bought the property,” Nicely said. There were “primitive” tools, such as horse-drawn tillers and corn shellers. And there was an old, dirty and very smelly pie safe that Nicely and senior staff specialist Sheila Staggs happened upon.

Staggs knew Russ was an authority on food safes. “She called and said they found a safe with Stonewall Jackson, and I said, ‘Are you sure it’s Stonewall? Go check,’” he said.

When she reported it was Andrew, Russ said he couldn’t get there fast enough. “Do not touch it,” he directed Nicely and Staggs, who wanted to scrub it clean. He told them to stuff it with moth balls to absorb some of the odor and use a dry brush to remove decades of dirt.

Russ offered to buy it. “The will stipulated that the personal property had to be sold at auction,” he said. “I couldn’t sleep at night, I was so excited.”

Russ said he was “distraught from having to spend so much. But knowing its history, I am so glad it will get the proper study and preservation it deserves. It is the earliest and most documented food safe in the valley and America.”

The safe will go on display in November during the Historic New Orleans Collection’s “Andrew Jackson: Hero of New Orleans” exhibit. Afterward, it will move into Russ’s home, he said.

Meanwhile, it takes Nicely much longer to get through Kroger in Clifton Forge, since so many people want to talk about the presidential safe that fetched a kingly sum.

“You just don’t know how many people are going through their outbuildings now,” she said.

The Museum of the Shenandoah Valley owns a presidential pie safe made by the same Lexington cabinetmaker and tinsmith duo, Matthew S. Kahle an…

A detail of Andrew Jackson on a 19th-century pie safe built to promote his presidential campaign.

This 19th-century pie safe, which was built in Lexington to promote Andrew Jackson’s presidential campaign, recently sold at auction in Clifton Forge for $102,500.

Pie safes were made with punched tin panels, which helped prevent mold and mildew from ruining the food stored inside.