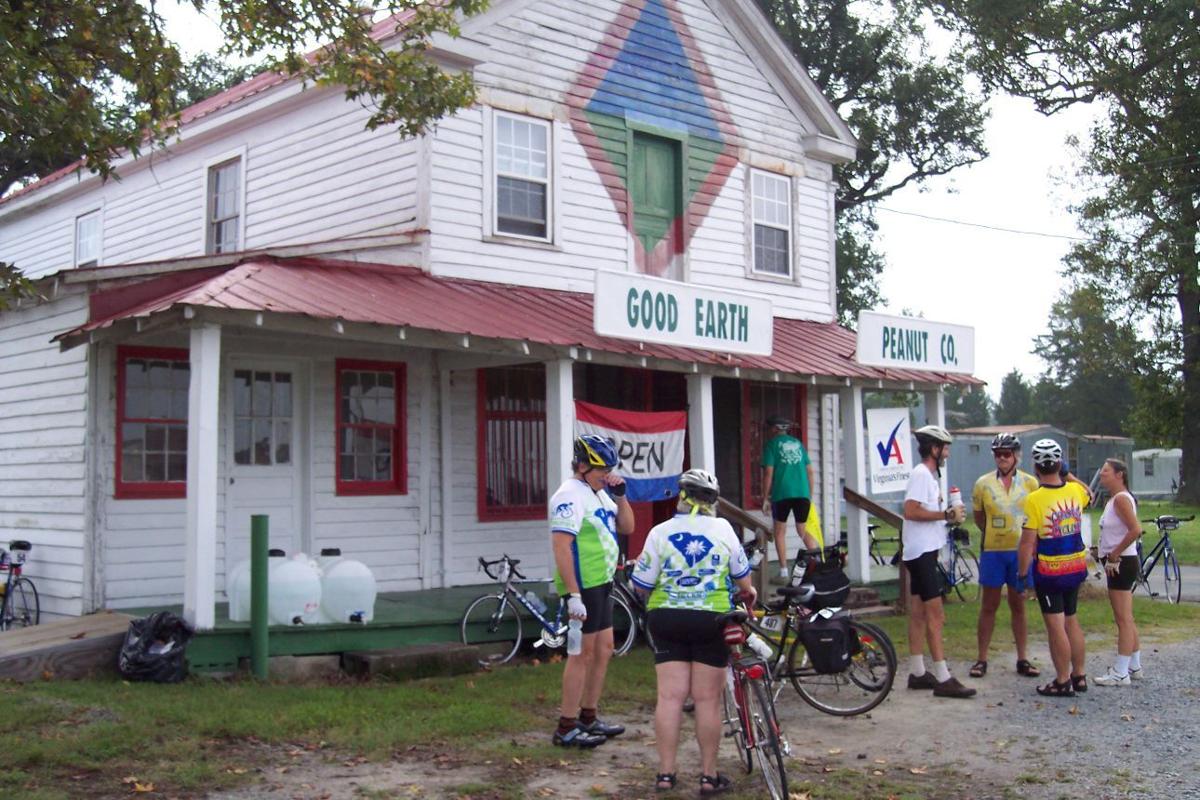 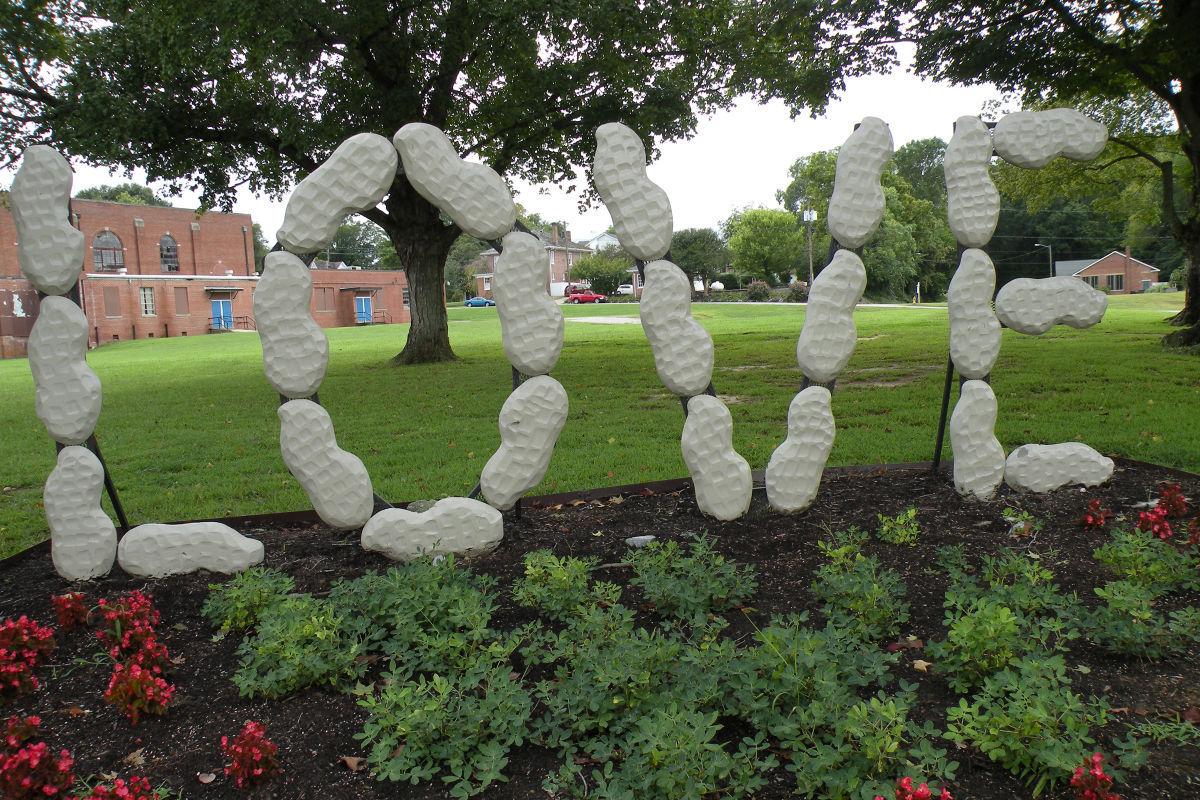 Photos by Su Clauson-Wicker | Special to The Roanoke Times 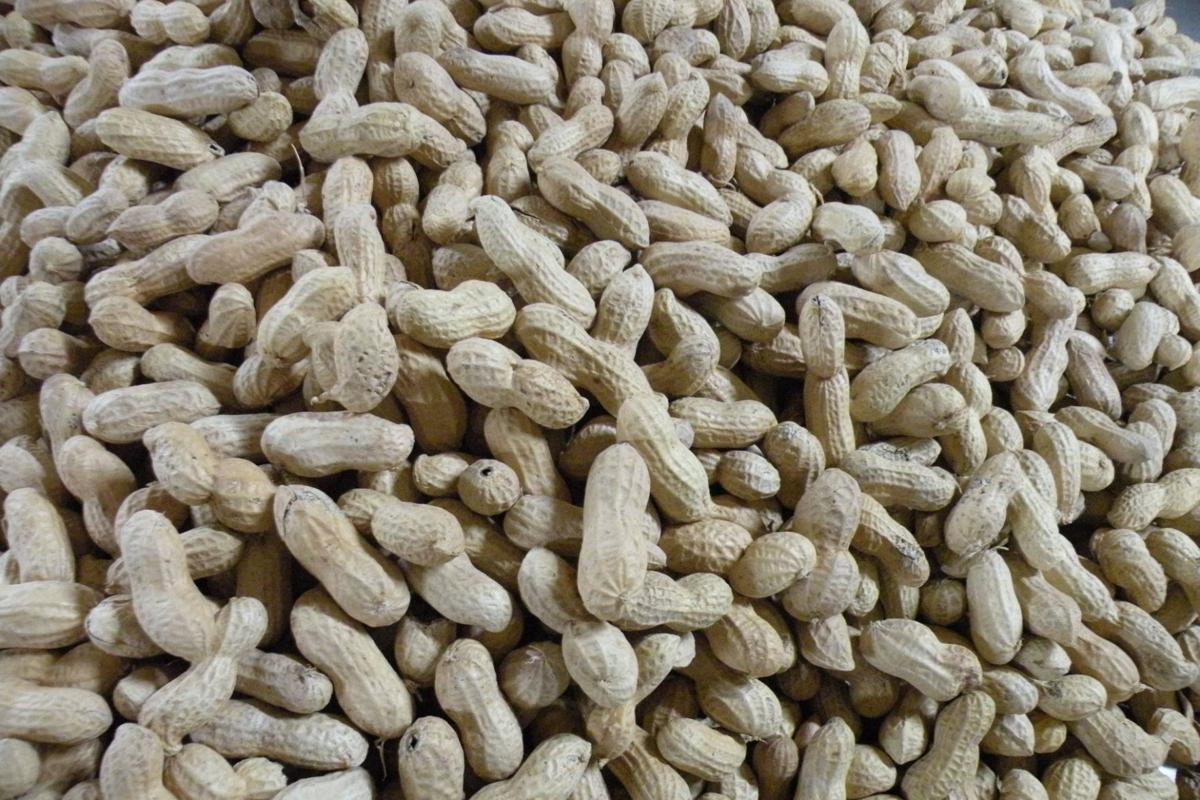 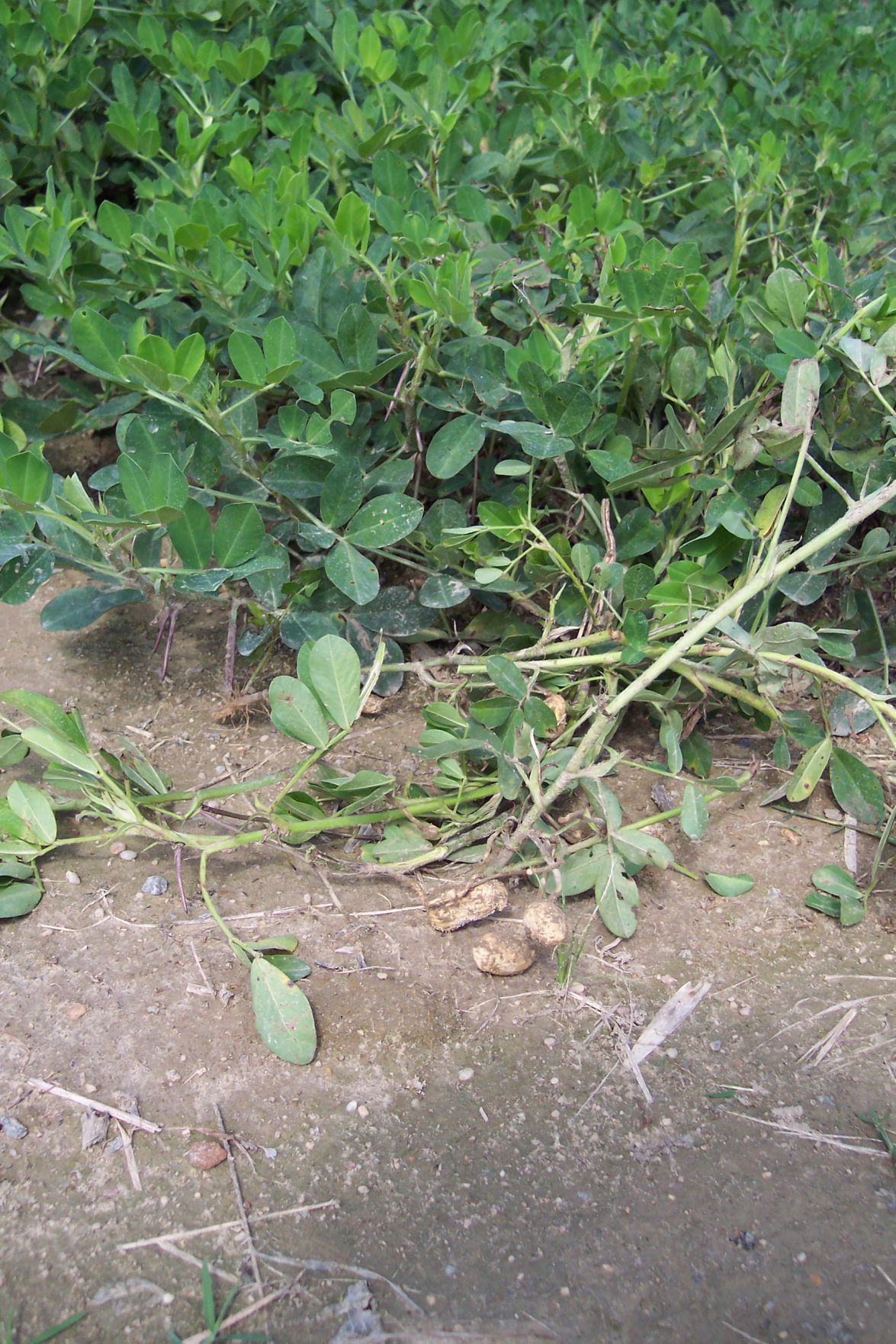 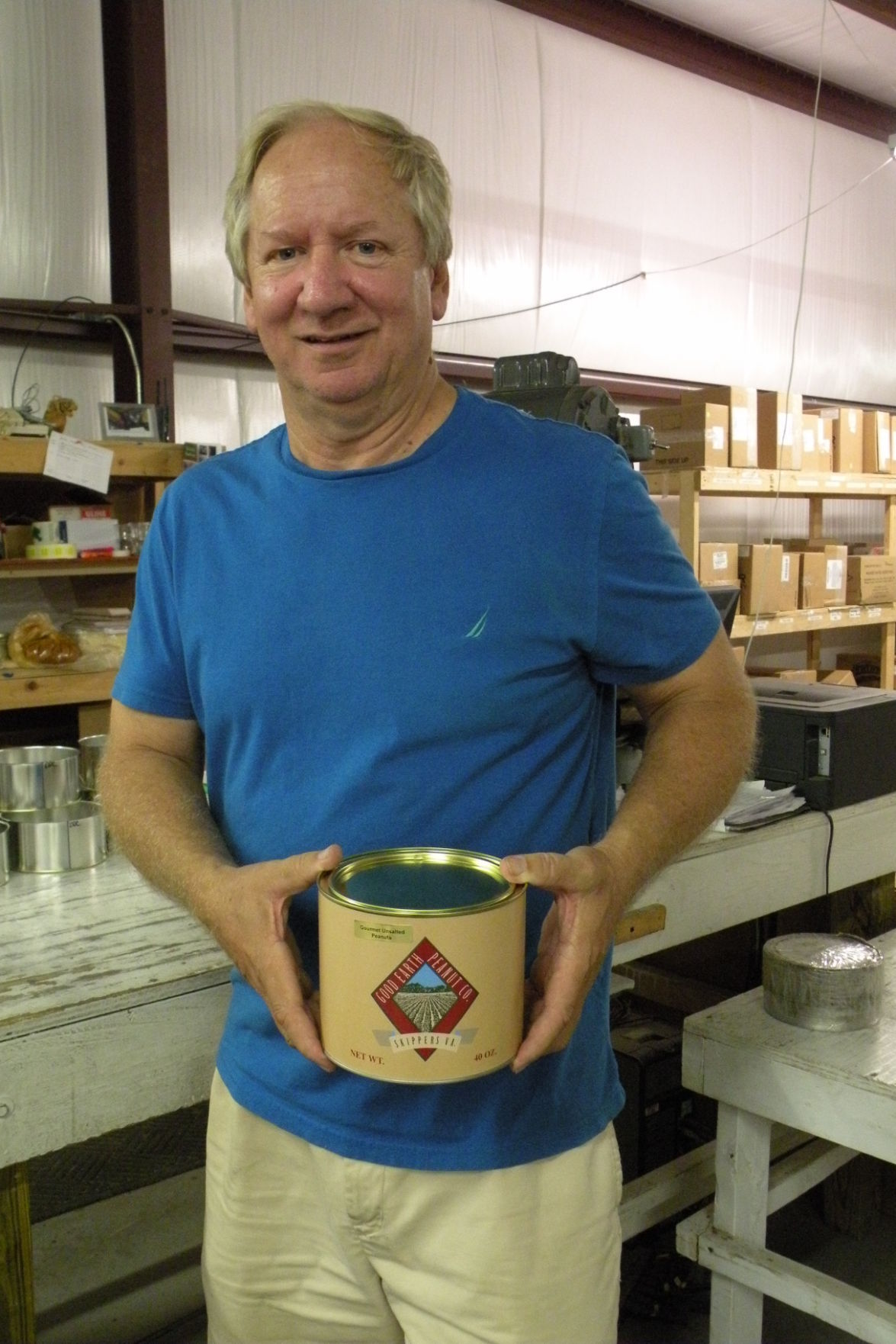 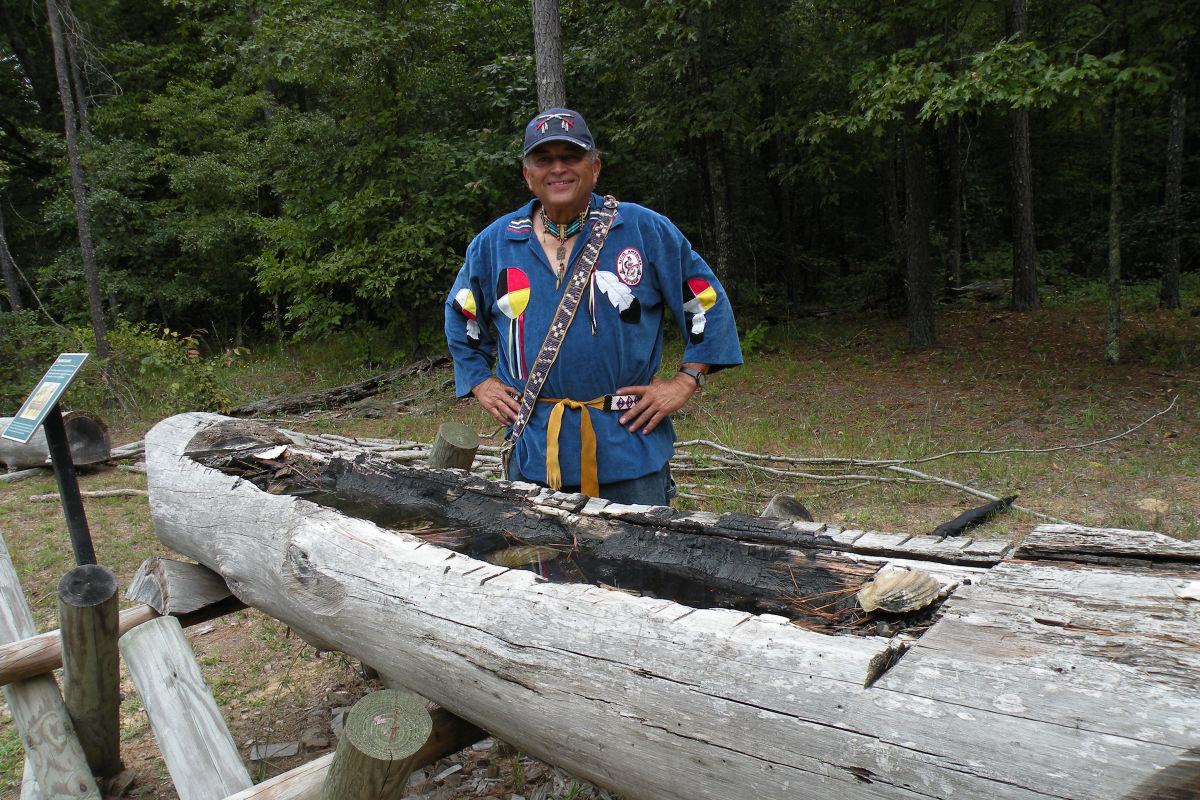 the third image here is Nottoway Chief Walt “Red Hawk” Brown with a dugout at the Nottoway village. 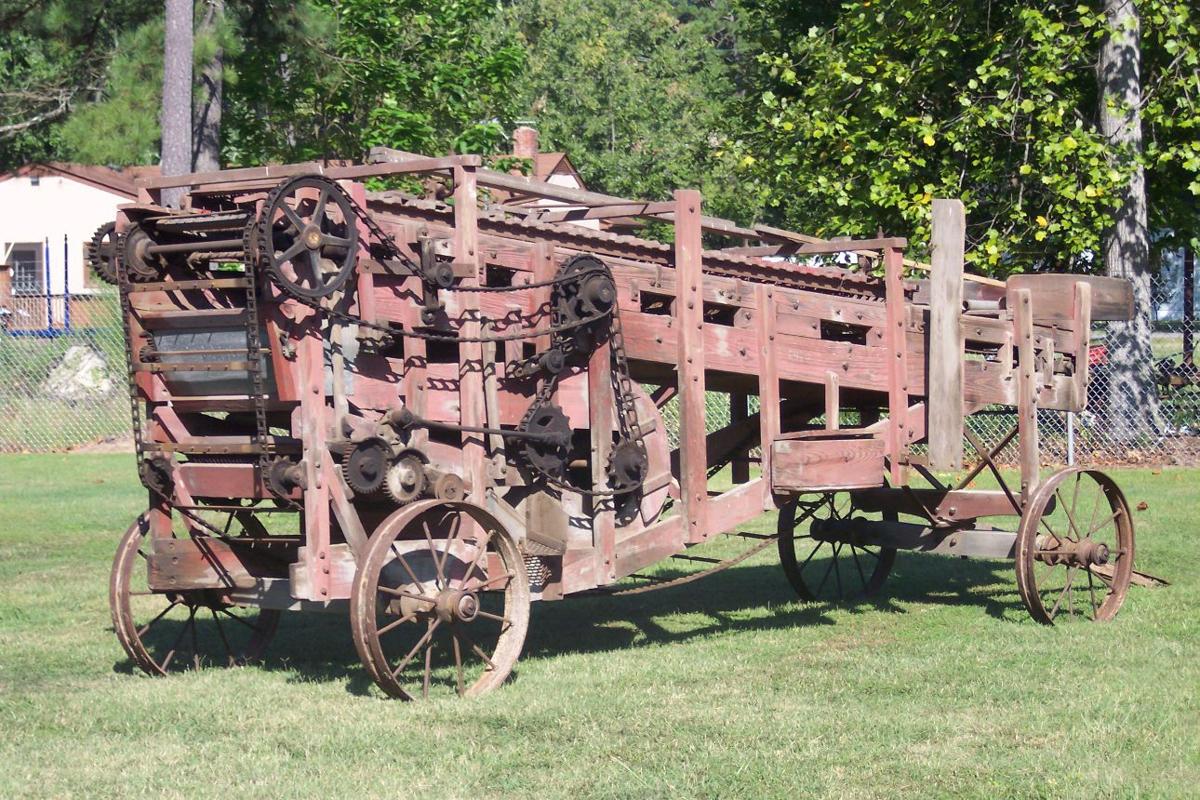 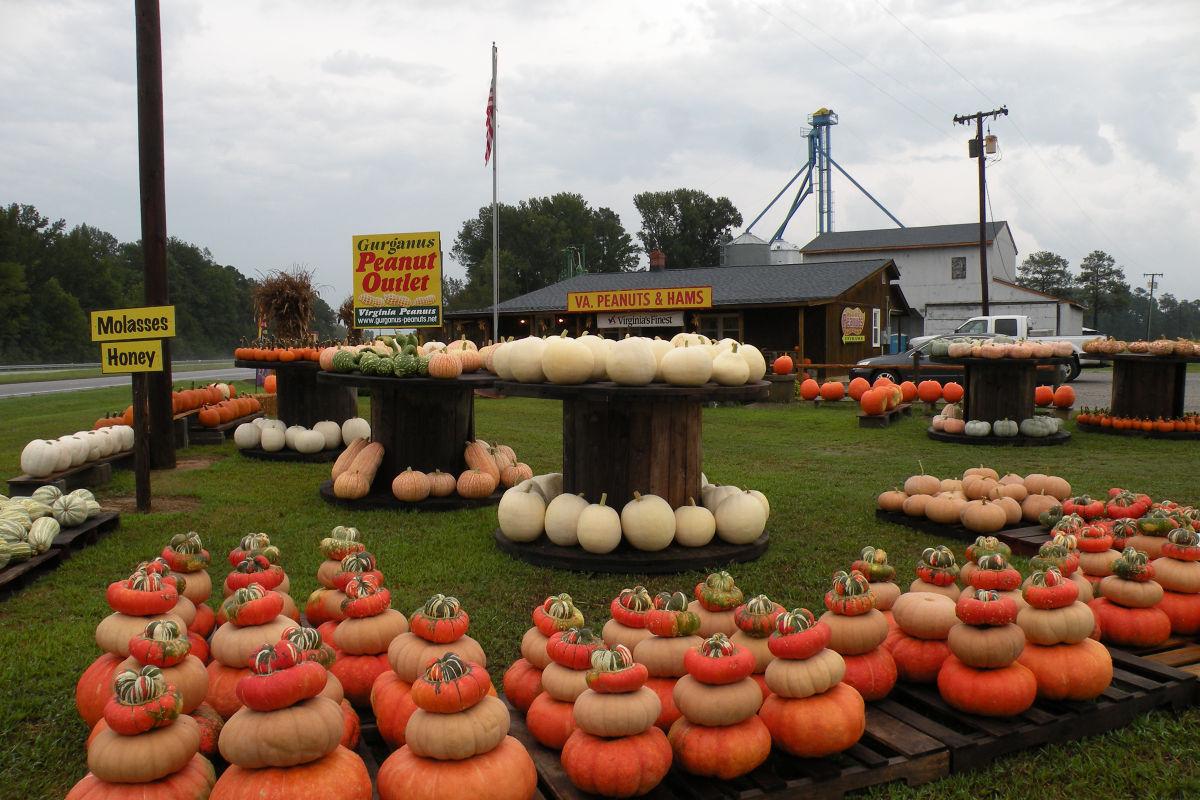 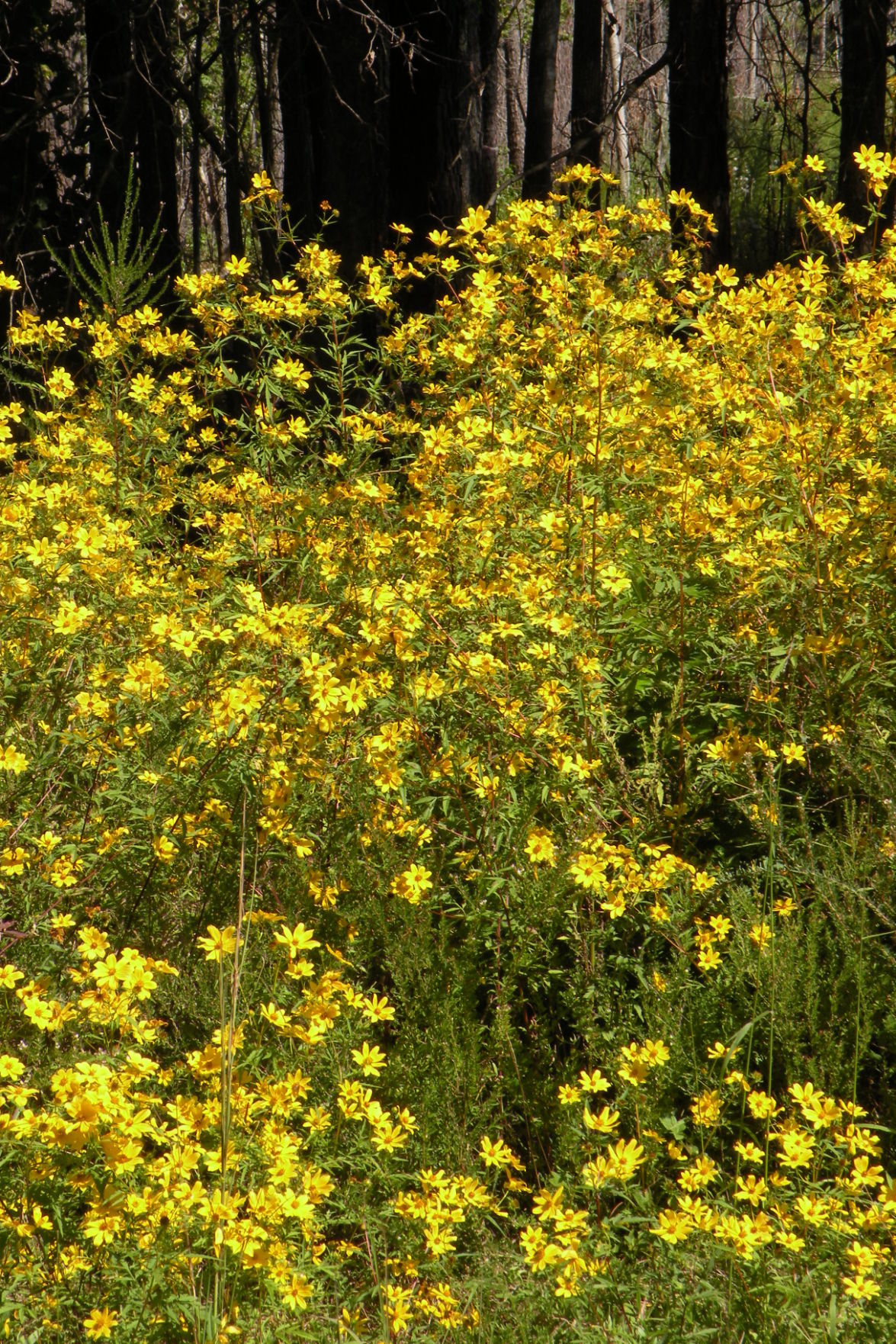 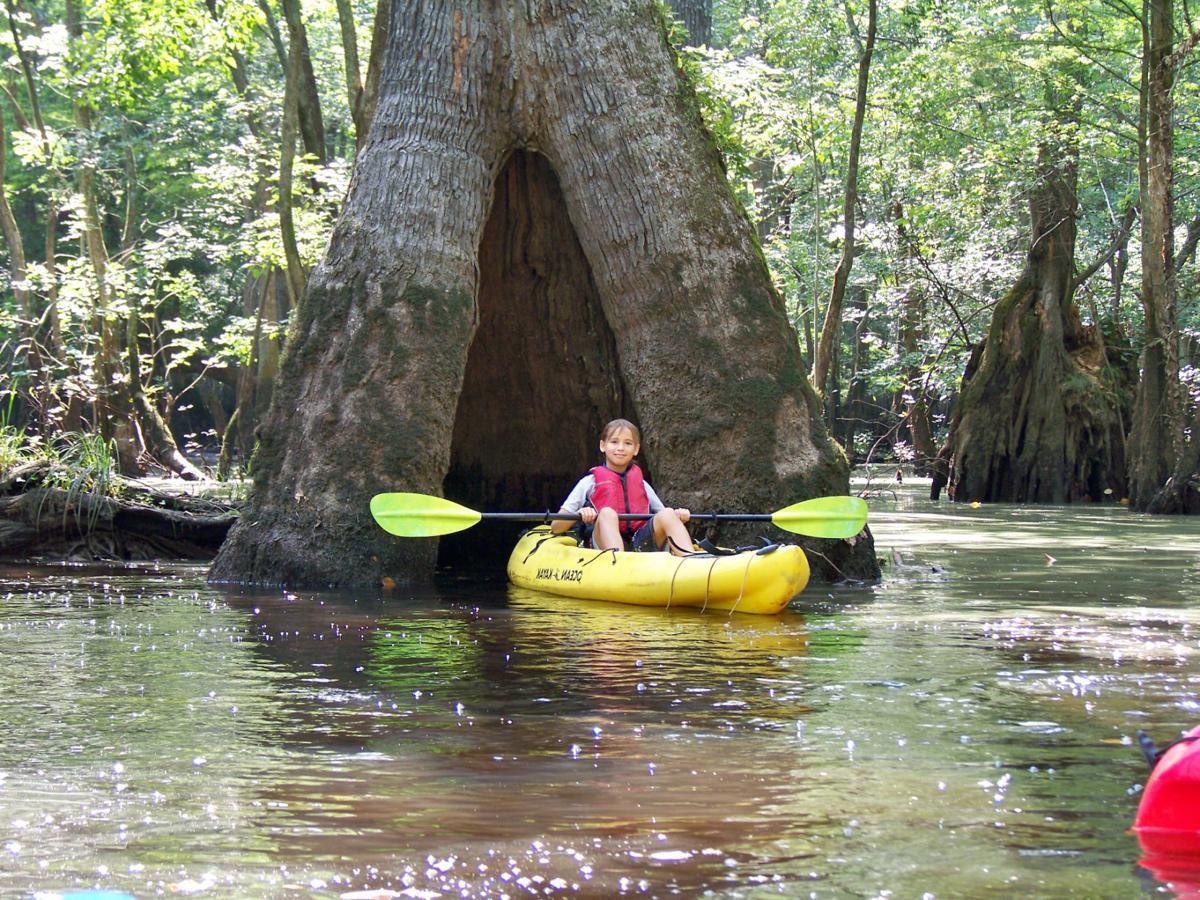 kayaking/canoeing photos on the Nottoway River. They’re by Blackwater Outfitters

Clarification: The Nottoway nation that owns Cattawhowrock Town prefers to be called Cheroenhakas. The original version of this story was unclear about this distinction. This version has been updated.

It’s harvest time in Southeast Virginia peanut country. You can smell it in the air — the mineral scent of diggers turning sandy soil, hay-scented vines, roasting peanuts. Commercial peanut growing started here, in this hot sandy soil, nearly 175 years ago. Virginia’s jumbo peanuts, the Cadillac of ground nuts, are a true local food worthy of a visit to a seven-county area south of the James River.

Farm stands along the highways sell peanuts grown, processed, and cooked within the neighborhood. These big, crunchy peanuts are the food of connoisseurs. Each small-batch cooker uses slightly different methods of preparation; the contrast with mass-produced nuts is like the difference between bulk wine from a plastic bag and vino from a corked bottle.

Virginia peanuts aren’t the only reasons to visit southeast Virginia during its long, warm fall, of course. But their harvest heralds the beginning of the true fall, harvest season. Peanut festivals in Emporia (through today), Suffolk (Oct. 8-11), and the Cheroenhaka (Nottoway) Indian corn harvest powwow (Nov. 13-15) celebrate the season. Peanut butter sculpting is the signature event at Suffolk; at Emporia, it’s a toss-up between the parade and the peanut cooking contest.

To get the scoop on the history of peanut growing, head to Waverly’s Peanut Museum. It may not be the only peanut museum in the nation, but it’s certainly the only one combined with a folk art museum.

This quiet, agricultural section of Virginia is not noted for tourism, which is part of its unaffected charm. Visitors can steep themselves in the peace of these flat, warm lands where the sun shines equally on everyone. The struggle and climb was long ago washed out of this geography, and cyclists can keep a steady pace for miles on the macadam backroads, lulled by their spinning wheels and the thrum of crickets. The cider waters of the Nottoway and Blackwater rivers lollygag southward, safe for even novice paddlers, though Blackwater Outfitters in Courtland can provide guides as well as kayaks, canoes, and shuttle service.

Perhaps you’ve figured it out — this is the place to decompress, to slow down, and connect to the natural landscape with all senses. So roll out the picnic blanket and cloud gaze. Smell the honeysuckle. Admire the drape of pink, purple, and blue morning glories along the roads. Enjoy a can of those gourmet Virginia peanuts, with or without chocolate coating or Cajun seasoning. Stop at crossroads stores; flap your hand at those folks on country roads who wave to you, most everybody. For serious rejuvenation, book a stay at Spiritual Wilderness Solitude’s woodland cottages and stroll the maze of Biblically named trails in silence – it could even lower your blood pressure.

Peanuts from the Good Earth

But don’t miss the peanuts. Virginia’s 175 peanut growers all farm within this concentrated area of sandy soil and hot August temperatures—chiefly Dinwiddie, Greensville, Prince George, Sussex, Surry, Isle of Wight and Southampton counties and the city of Suffolk.

For Lindsey Vincent, who owns and operates Good Earth Peanut Company, making a living selling peanuts cooked with his grandmother’s special recipe is a childhood dream come true. He and his wife, Scott, raise, process, and sell peanuts from a warehouse and a circa-1840 general store that have been in his family for generations.

The peanut business wasn’t handed to them however. Lindsey’s family was pushed out of the business by drought and high production costs; the young Vincents bought back part of the property, moved their peanut cooking operation out of their home kitchen, and went into full-time production 27 years ago. They’ve weathered lean years, constructed new buildings, and added almonds, cashews, pecans and other nuts to their offerings. Peanuts are flavored with chocolate, wasabi, maple syrup, honey, and cracked pepper, but his grandmother’s recipe is the best seller.

Word of the store’s “50 nut buffet” of product samples lures travelers off Interstate 95 at Skippers; the flavor and crunch of the Vincents’ product draws them back again. Lindsey won’t divulge his grandmother’s recipe, but says he soaks the peanuts before roasting.

“We raise our own peanuts and we buy from friends, but we only use extra large and super extra large nuts — the premium ones.”

He now ships peanuts around the world. Good Earth peanuts sell online and will soon be offered at Roanoke’s Black Dog Salvage.

A bit north in Waverly, where peanut farming began, the nation’s first peanut museum came into being because Shirley Yancey was asked about peanut “trees” one too many times. She proposed the coal shed behind the Miles Carpenter Folk Art Museum be converted into a repository of peanut information, and the Peanut Museum was born. While the house museum honors Virginia’s most famous folk artist with 60 pieces of his quirky carvings (Elvis is in the house), the Peanut Museum contributes a little folk art of its own. A Mr. Peanut made with masking tape and a collection of peanut-shell characters share space with peanut graders, roasters and poppers.

The Nottoway runs through it

South in Courtland, the Cheroenhaka (Nottoway) nation, a state recognized tribe, will be celebrating harvest in general at their Fall Harvest Powwow Nov. 13-15 at Cattashowrock, a reproduction 1580s Iroquoian village, complete with a palisade and long house similar to others unearthed in Southampton County. The village sits upon 100 acres of old tribal land bought back recently for festivals, a museum and educational tours. Festivities will include dancing, drumming, artifact identification by the Archeological Society of Virginia and skills demonstrations such as flint knapping and food preparation. Fry bread and Indian tacos will be on sale. The village itself is open for tours on Saturdays all fall; call Chief Red Hawk Brown at 757-334-5510 to confirm.

The Nottoway River twists and turns its way through cypress swamps and peanut fields within a mile of the tribal village before it joins with the Blackwater River to the east. The first Americans, the name Chief Brown gives Indian people, fished the Nottoway for shad and largemouth bass, which still take your bait here. Blackwater Outfitters in Courtland rents, shuttles and guides trips in canoes and kayaks year-round. A float down these lazy rivers is just what your soul ordered. Keep an eye out for fossils; some outcroppings have turned up imprints of aquatic life 4 million years old.

When it’s time for serious recharging and rejuvenation, book one of Spiritual Wilderness Solitude’s upscale cottages in a 116-acre forest. Although the gated retreat center has a decidedly Biblical emphasis, proselytizing is not part of the package. After check-in, the hosts leave you in solitude. Even at the couples’ retreats, held six times a year, spiritual discussion is open-ended.

To preserve the character of this One God Ministry property, some rules apply: cottages are rented to individuals or married couples only. Friends or unmarried couples should rent separate cottages. Telephones, computers and televisions are not part of the picture. In fact, cell phone reception is only available at the main chapel; guests are issued walkie-talkies for emergency communication on the grounds. The disconnection from the electronic world clears the way for connection to the natural and spiritual worlds.

The property is ideal for meditative walks. Sixteen miles of groomed paths wind through the forest. Your Bible is truly your road map, or trail map here. Paths are marked with books of the Bible; someone who doesn’t know the order of the Old Testament well can get seriously disoriented. Luckily for me, I was able to eventually stumble into the New Testament side of the property and find my way to the personal prayer chapel in the meadow.

The landscape is flat and close here; no sweeping views. Visitors find beauty in the close perspective: elegant ferns, clusters of yellow daisies, spongy mosses like tiny forests themselves. And quiet, which has its own beauty.

Why does white always go first in chess?

Ever since the late 1800s, it has been standard for white to go first in chess. Has the time come to get rid of that rule?

New photograph of Prince George for his 8th birthday

Keeping with tradition, the photo was snapped by his mother, Catherine, Duchess of Cambridge, who has a passion for photography.

While the COVID-19 pandemic has had profound impacts on pregnancy and birth rates, some effects have defied expectations.

Recipe of the Day: Summertime Meatloaf

When you think about what to serve for dinner during summer you probably consider pasta salad, ceviche and other cold dishes. But classics like meatloaf are not to be overlooked.

Cornershot: Thanks to the pioneering women of NPR

National Public Radio is celebrating its 50th birthday this year. I usually have NPR on in the background while I'm working. Back in May, the …

It's very common for pets to be frightened by fireworks around the Fourth of July. Here are some tips to help ease their anxiety.

Which insect repellent is best for children? Here's a pediatrician's advice

Warm weather means more kids are getting outside to play, hike and enjoy the fresh air, and it also means preventing insect bites.

How to add the perfect pot filler to your kitchen

A pot filler is a fancy addition to any kitchen. Basically it's a cold water tap installed by the cooktop area, eliminating filling pots at the sink.

EatingWell: This dish gives off a Mediterranean vibe

Photos by Su Clauson-Wicker | Special to The Roanoke Times

the third image here is Nottoway Chief Walt “Red Hawk” Brown with a dugout at the Nottoway village.

kayaking/canoeing photos on the Nottoway River. They’re by Blackwater Outfitters